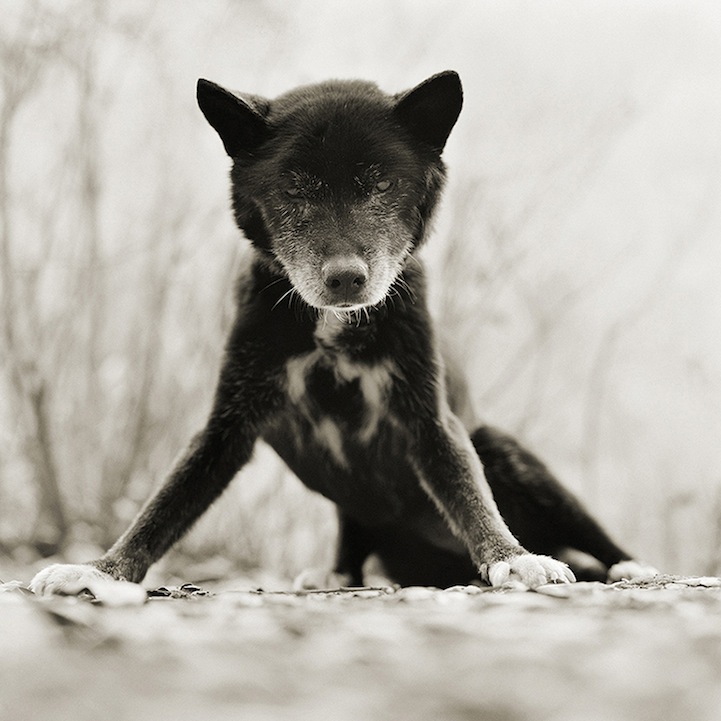 While we'll always have a love and fascination for baby animals, like those taken by Sharon Montrose, or even majestic creatures that are in their prime, like those shot by Andrew Zuckerman, it's not often that we pay respect to the ones who are at the end of their lives, the ones who've lived through countless stories that you can see them etched on their weary faces. That's where Isa Leshko comes in.

In her stunningly beautiful series, Elderly Animals, she traveled to sanctuaries around the country, giving some much needed love and attention to this subset. Through the project she hopes for us to explore our feelings about “aging, mortality and loss.” There's also a very personal reason why she started this series, which you can read about in our one-on-one interview with the photographer below. 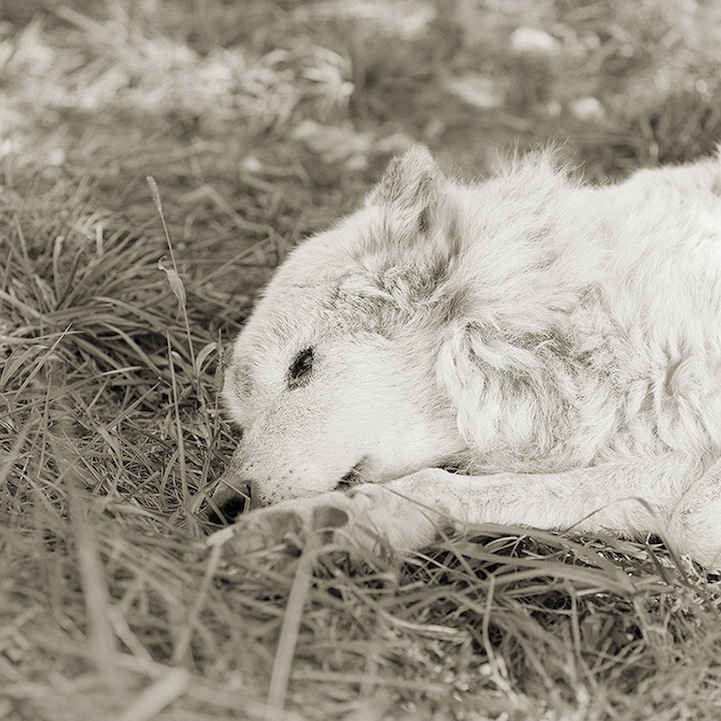 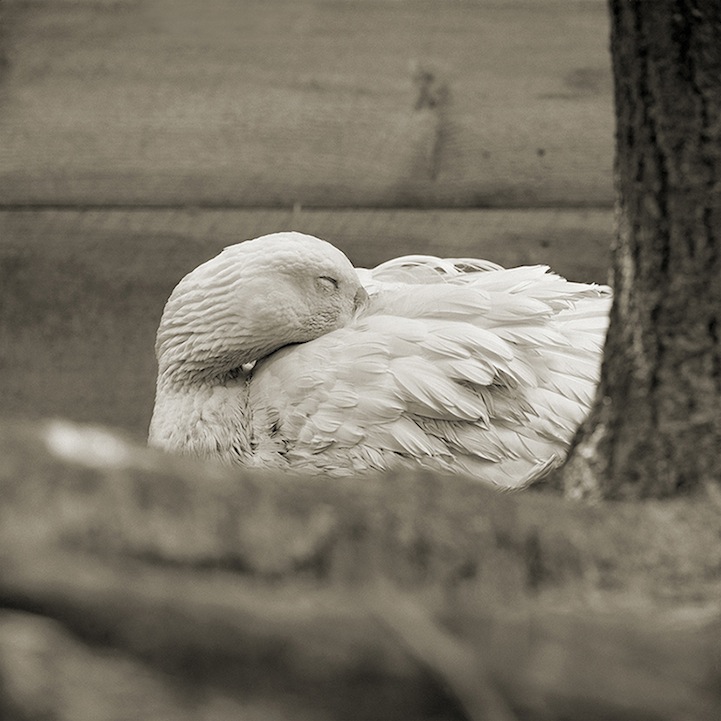 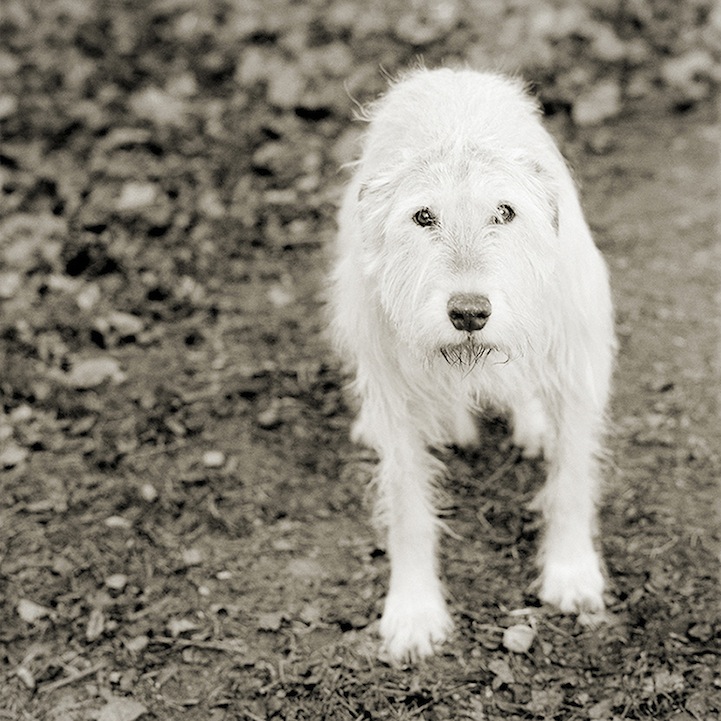 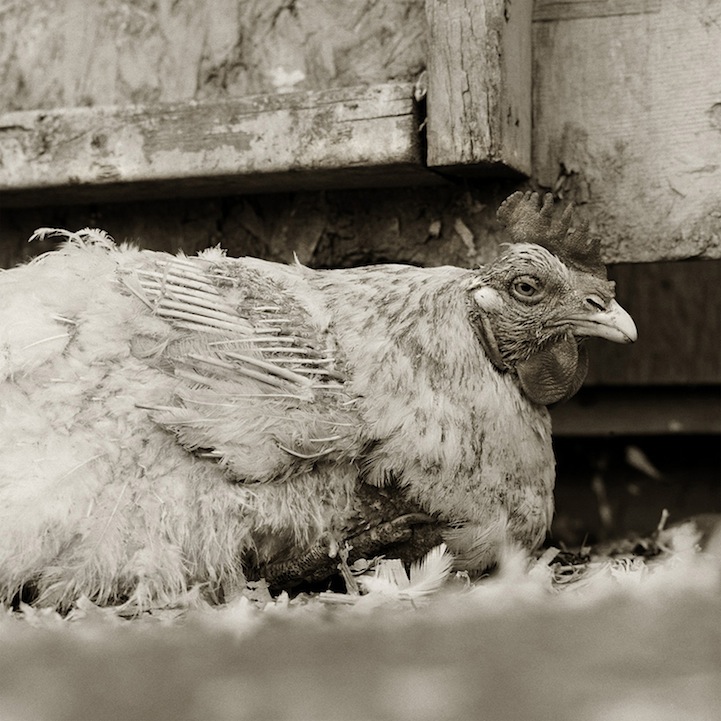 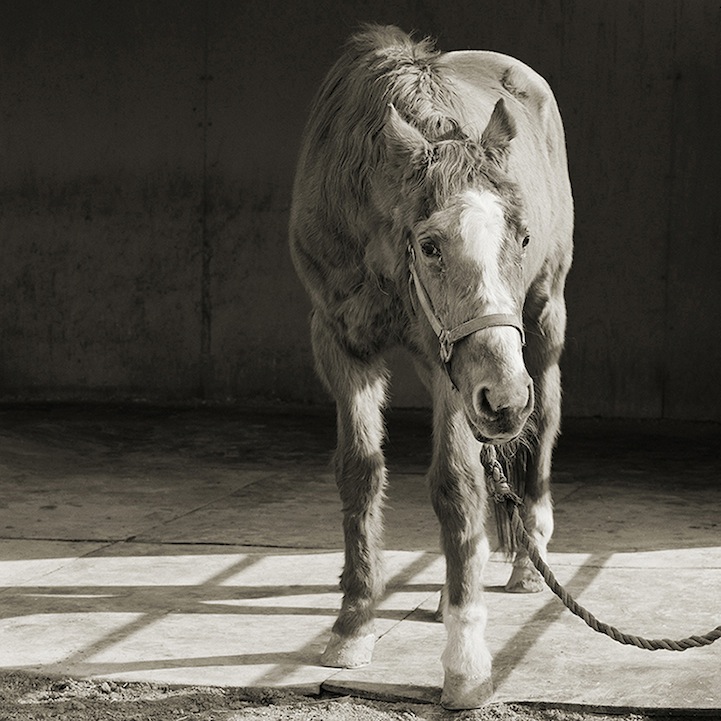 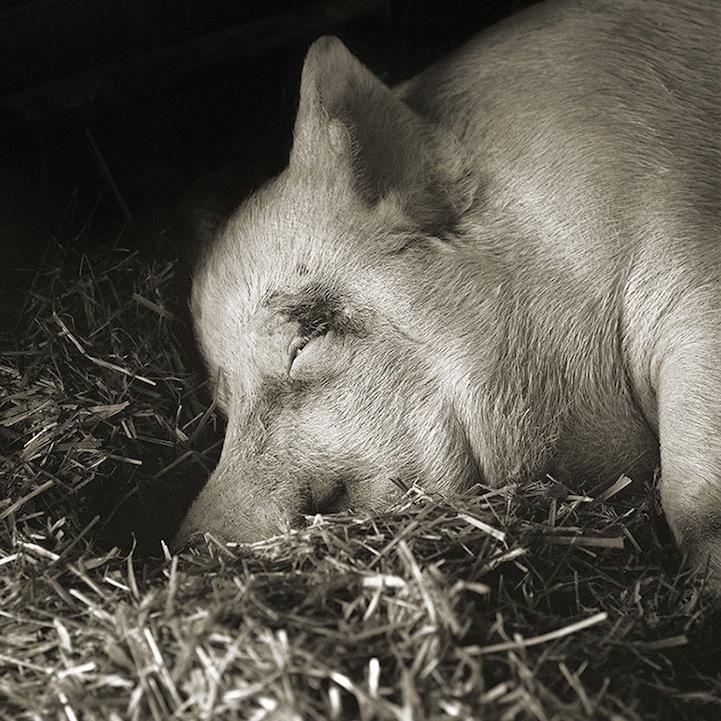 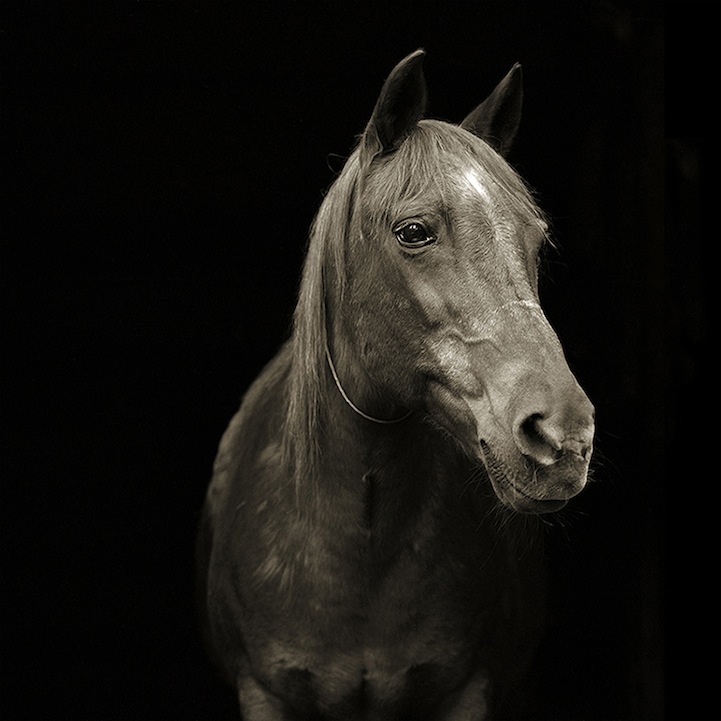 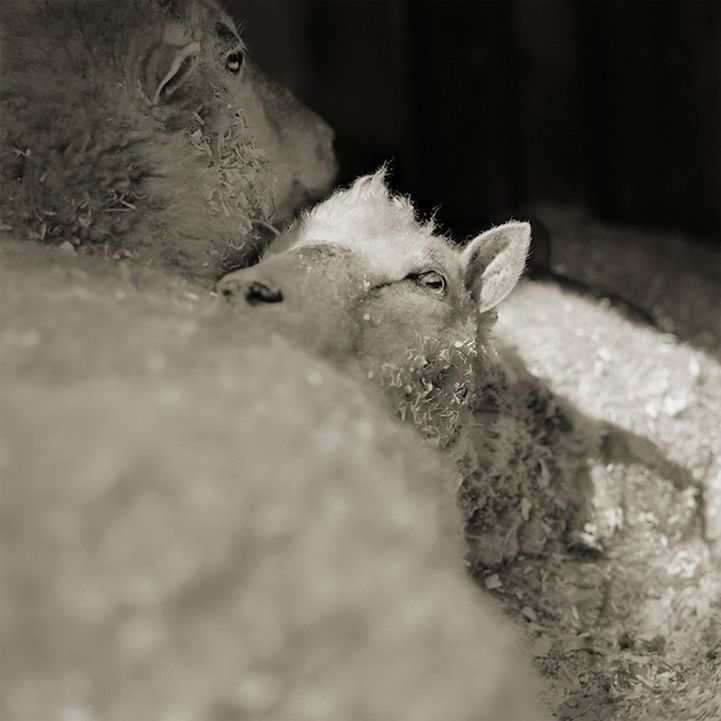 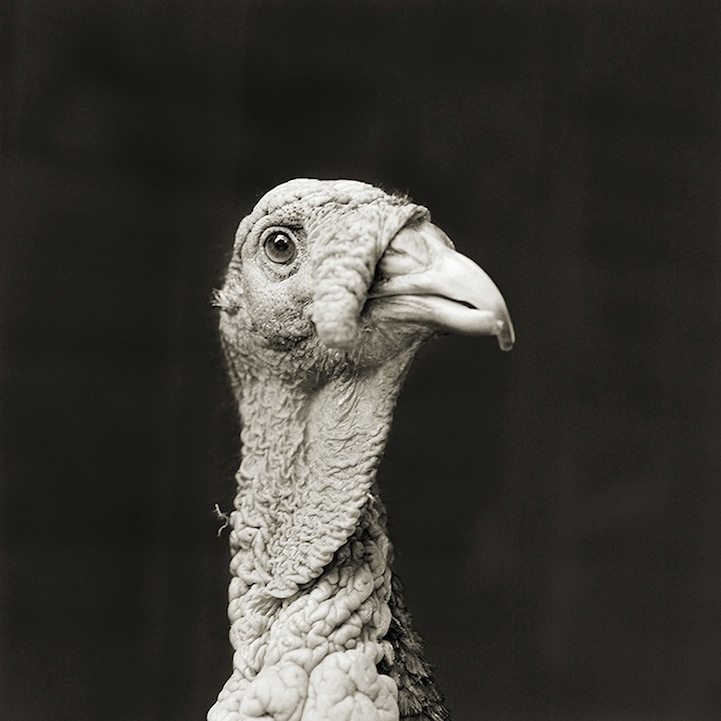 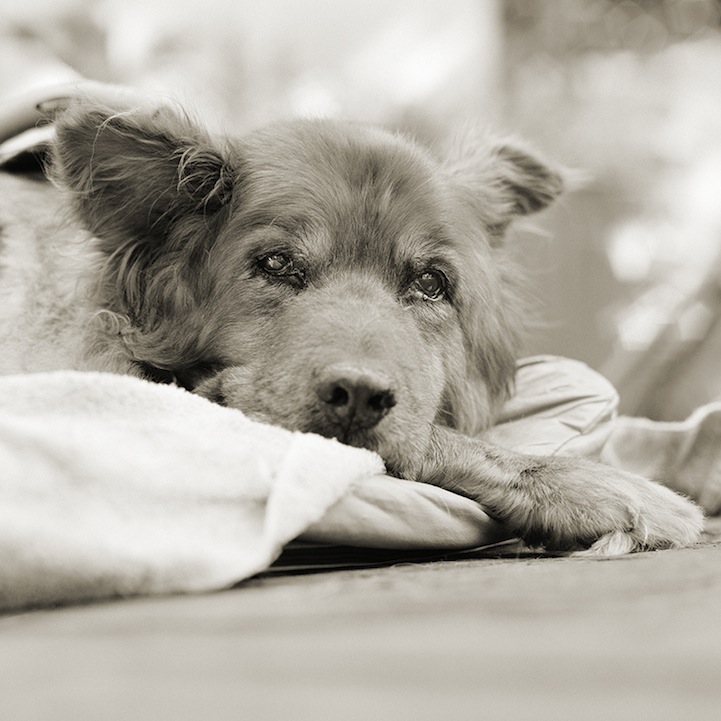 What inspired you to photograph elderly animals?
I had spent a year living in New Jersey so I could help my sister care for my mother who has Alzheimer's disease. We eventually concluded that a nursing home was the safest place for her to live, which was a very difficult decision to reach. During this time, I made a conscious decision to not photograph my mother. It was important for me to be completely present as a daughter and caregiver. Also, I did not have a terribly close relationship with my mother prior to her illness. So I did not feel I had a right to photograph her, particularly while she was in such a vulnerable state. I have deep ethical reservations about photographing people who are unable provide informed consent.

However, my time spent in New Jersey had a profound impact on me and I knew that the experience would eventually influence my photography. I stumbled upon the idea of photographing elderly animals after a chance encounter with a blind 35-year-old horse that was living on a relative's property. I was mesmerized by this animal and spent the afternoon photographing him. When I reviewed my film from that day, I realized that I had found a photographic means through which I could explore my emotions about my mother's illness.

How did this project help you deal with your grief?
I have been able to express my grief through some of my images. And, I experience grief anew each time I learn of the death of one of my subjects, which happens all too frequently with this project. But grief was only one facet of my reaction to my mother's illness. Seeing my mother so frail forced me confront my own mortality. My maternal grandmother had dementia during her later years and now my mother has it. I am terrified of developing this disease. Through photographing elderly animals, I am able to stare down my fear of aging. Perhaps by immersing myself in my fear, I will be able to dilute its power. I have cried either during or after several of the shoots for this project. Some of the images from this project feel like self-portraits, or at the very least they are manifestations of my fears and hopes about what I will be like when I am old.

What did you learn about older animals in the process?
Like humans, some animals age extremely well and others age prematurely due to health problems. I was fascinated to learn that some species have adapted the ability to hide their advanced age to avoid being vulnerable as prey. These animals maintain a youthful appearance and then simply die one day of natural causes. Defining the age at which an animal is considered elderly is not always clear-cut. Factory farm chickens, for example, are slaughtered when they are around 42 days old and they are bred to mature quickly. I photographed (but did not use for my project) factory farm chickens that were a few years old. These birds were considered very old even though other chicken breeds can live 4-7 years or even longer.

For this project, I am seeking animals that come from diverse backgrounds so I can depict a range of elderly experiences. Some of my subjects have experienced neglect and abuse before they were placed in sanctuaries. Others have been well cared for since an early age. Some appear very old, particularly (but not necessarily) those that have led hard lives. I have begun to view my images as testaments to endurance and survival.

How did it change you as a photographer or help you grow?
Animals are challenging to photograph in a meaningful way. It is too easy to create images that are cute or sappy or anthropomorphic. I am keenly aware of these risks as I photograph my subjects and I ruthlessly discard much of what I shoot when I edit my film. My goal is to create images that contain nuanced emotion and not inauthentic schmaltz.

I have approached these images as formal portraits and I try to depict the underlying personality of each animal I photograph. When possible, I spend several hours with my subjects and I try to visit them multiple times. I want the animal to become comfortable around me, and that can only occur sometimes with prolonged exposure. I am shooting this project with a Hasselblad 503CW camera, which is a manual film camera. Even old animals can move quickly in unpredictable ways, so I generally do not use a tripod when working. Shooting in low-light situations can be especially tricky with this setup.

Were you surprised by all the media attention? How has your life changed since then?
I never anticipated this reaction to the work. As I was shooting the first subjects from this project, I remember thinking to myself that no one will want to look at pictures of old animals. In fact, I left that first batch of negatives from the project unedited and unprinted for about a year. In November 2009, I decided to edit and print these images purely on a whim as I was preparing for my first portfolio review, PhotoNOLA. To my surprise, I received a great deal of encouragement that weekend, which motivated me to pursue this project formally. But prior to PhotoNOLA, I had not considered sharing these images publicly.

So it's been rather strange to watch my work go viral on the Internet, and I'm still sifting through my emotions from this experience. At times, it's been exhilarating and highly rewarding. People from over a 100 different countries have visited my web site since April. That's simply baffling to me.

Thousands of people from around the world have shared my images via Facebook, Twitter, blogs and Tumblr sites. Most people though do not ask permission prior to using my images on their blogs or Tumblr sites, which has been a bit unnerving. For the most part, I have accepted these unauthorized usages of my images as the cost of putting work up on the Internet. And, I do appreciate that these bloggers have connected me with new and unexpected audiences.

Prints from this series have been selling through my galleries and the exposure has opened doors I had not imagined possible at this stage in my career. I feel deeply grateful and downright lucky for these recent developments.

What do you hope others get out of your series?
I am taking these pictures primarily to gain a deeper understanding about what it means to be elderly and to exorcise my own fears about aging. I hope my images are open to interpretation and inspire viewers to explore their own thoughts and feelings about aging.

Although it was not my original intention, a political element has emerged in this work as the project has evolved. I have been a vegetarian through most of my adult life, which is why I think I have been drawn toward photographing farm animals for this project. I think it's provocative to show a farm animal that has actually lived its natural life span given that most of these animals experience brutality and death early in their lives. By depicting the beauty and dignity of these creatures in their later years, I hope to challenge people's assumptions about these animals.

Also not my original intention, but I hope these images encourage people to consider adopting an elderly companion animal. These animals generally do not fare well in shelters because people prefer to adopt kittens and puppies. Yet, older animals can be wonderful companions and there are numerous advantages to adopting a mature animal.

Do you have any tips for others interested in starting a series like yours?
Be open to inspiration in unexpected places; a chance encounter with an elderly animal is what gave me the idea for this project. Carry some sort of camera with you at all times. Because they are so light and virtually indestructible, I find the Holga is an ideal camera for this purpose. I also regularly use my iPhone for photographic doodling and trying out new ideas.

Photograph subject matter for which you feel an abiding curiosity and/or a visceral emotion. Long-term projects require a tremendous commitment, and your passion will sustain the work. Your images will also be considerably stronger if you are engaged with the subject matter.

Don't worry if your images don't remotely resemble what is currently being celebrated in the art world. Focus on making the best possible work you can create and worry about finding an audience for it after its been made. The work will be more honest and original if you take this approach.

I look at great deal of photography and other artwork for inspiration. But, when I'm shooting new work, I try to disconnect from the art world for a while. Doing so helps me maintain my own voice and keeps me from thinking about how the work will be received. I developed this practice a few years ago after reading this wonderful article by Cara Phillips, which contains several other valuable suggestions for emerging photographers.

Thanks for the interview, Isa. Absolutely in love with your work.

Last week, a solo show of Isa's work opened at the Corden|Potts Gallery in San Francisco and it will run through July 30. This show is an exhibit of another project that she calls Thrills & Chills. If you're in San Francisco or going through that city, make sure to check it out.

You can see these works and more at Isa Leshko's website.