1500 Scissors Shockingly Suspended from the Ceiling 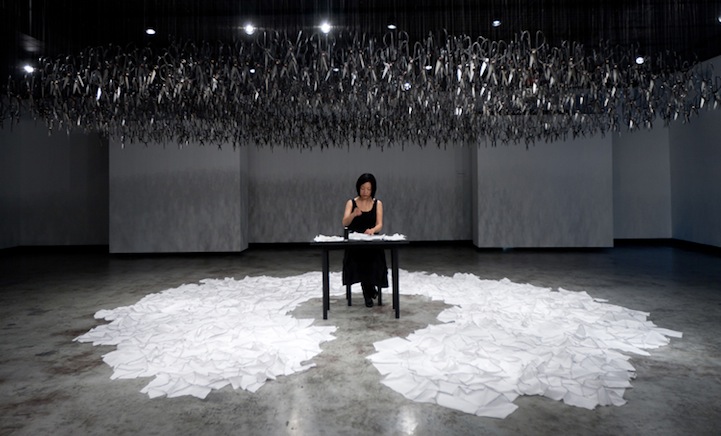 Imagine walking into a silent room where a woman is mending. Now imagine that she's sitting underneath 1,500 pairs of sharp Chinese scissors that are suspended from the ceiling, precariously pointed downwards. This was the idea behind The Mending Project by Beili Liu.

In this ambitious, large-scale installation that was shown this past spring at the Women and Their Work Gallery in Austin Texas, Liu created an atmosphere of beauty and danger. She immersed her viewers in an environment that suggested fear and looming violence. Amazingly, Liu herself sat beneath the sharp blades. As each visitor entered the space, they were asked to cut off a piece of white cloth which hung near the entrance, and offer it to her. The mended fabric grows in size throughout the duration of the performance, taking over the floor.

We were able to get in touch with the artist and ask her a few questions including how the interesting idea came about. “I have worked with needles and thread as installation materials for the last three years or so,” she says. “So it seems to be a natural progression to work with scissors and fabric.

“I grew up in China. These traditional scissors are used in each household. There is a warm familiarity about them. I am also attracted to their simple and elegant form. These scissors consist of three simple parts: two extruded iron pieces, and one copper hinge that links them in place.

“Conceptually, I am interested in harnessing the threatening essence of these razor sharp scissors. They are not ‘polite' like the ones we are used to. You can use them to cut or stab. Also, in Chinese culture, scissors should never be positioned pointing at anyone, for it will bring ill fortune. They can be sharpened when needed and last a lifetime. On the other hand, they are women's tools, just like sewing is, traditionally, a woman's task in domestic life. I am interested in investigating the power of the humble action of ‘mending,' as a woman artist.” 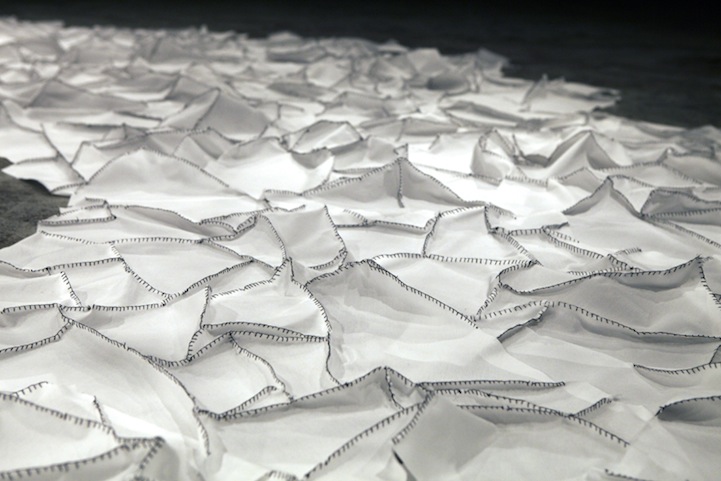 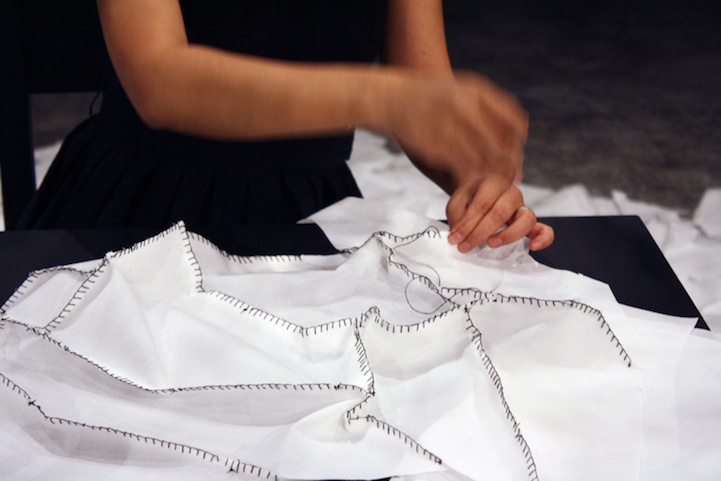 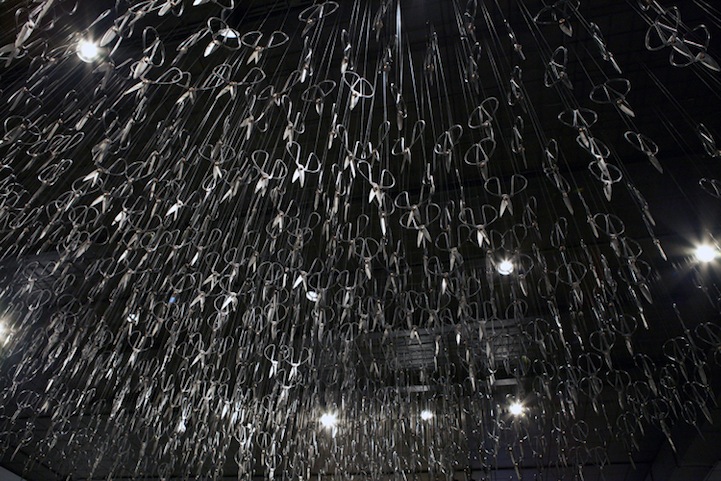 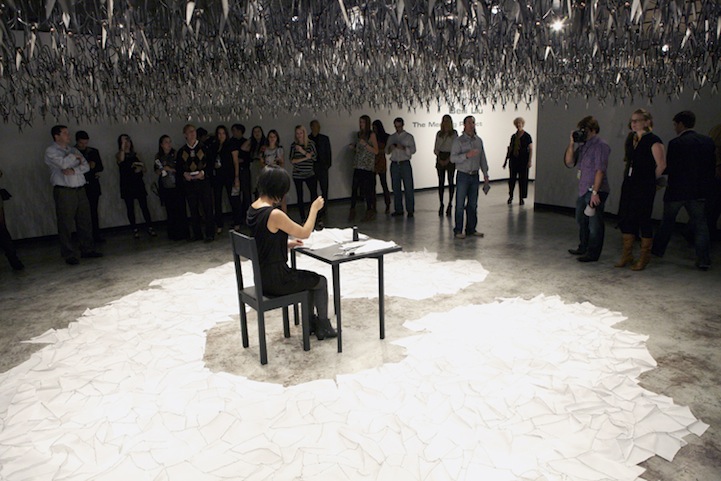 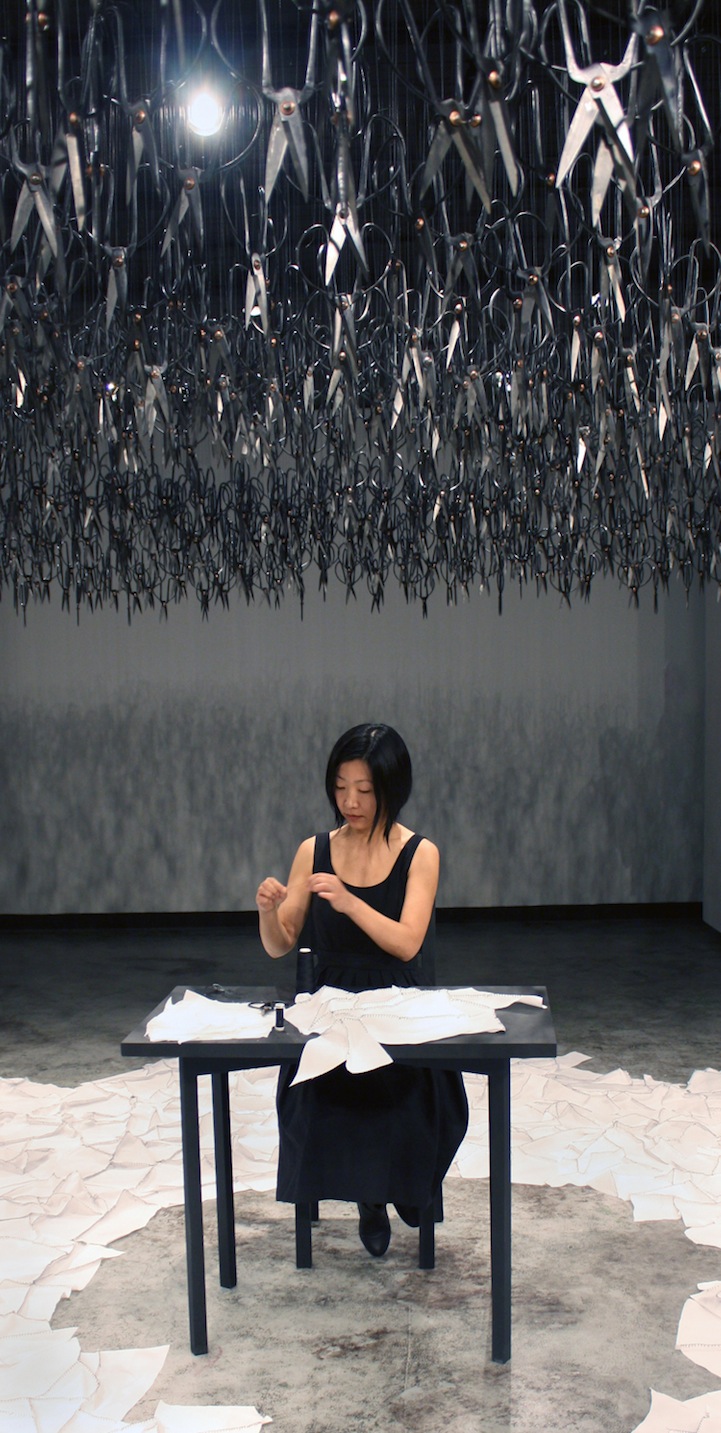 So what was the crowd's reaction like? “Upon entering the space, viewers walked around a curved wall before being confronted by the room-sized installation and performance,” she said. “The initial response was perhaps shock and disbelief, which then turned into intrigue, fear, concern (for the performer), curiosity and excitement. Then their energy transformed to be more contemplative. People slowed down, examined, gazed, walked around the piece silently, and breathed with the sewing rhythm. It is quite an interesting combination to be both the performer and the observer of the viewer's reaction.”