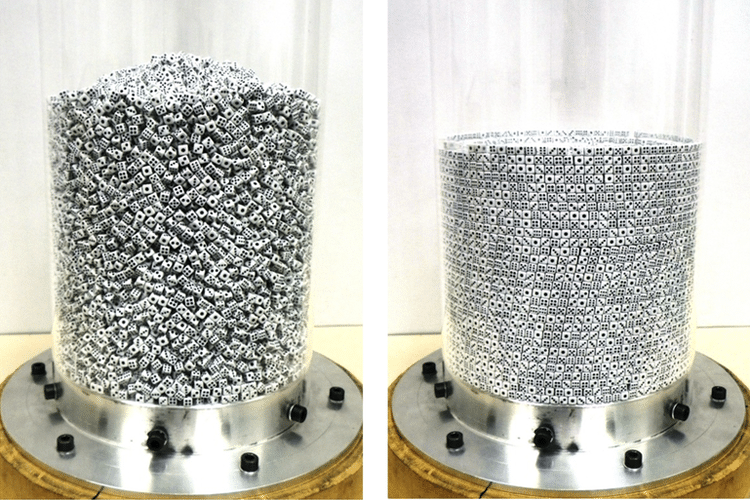 It turns out that dice, like martinis, prefer to be shaken, not stirred. Scientists in Spain recently proved this with a cool physics experiment in which 25,000 miniature dice (measuring half a centimeter in size) were placed in a large plastic cylinder. After “sufficient vigorously twisting” the vessel of randomly-oriented dice, the result was a perfectly-ordered arrangement.

So, how does this experiment work? It follows the same logic as if you were tapping a box of sand—with each thump of your finger, the pieces pack themselves tighter and tighter. When they can’t be packed any further, it’s called maximum density. Diego Maza and researchers from the University of Navarra essentially sped up this process with the forceful shaking and twisting.

The findings varied on how fast and how many times the cylinder was twisted. Accelerations above about half the acceleration of gravity (0.5 g) were the most fruitful; the dice reached their maximum density after 10,000 twists or so. In a video of the experiment, the scientists film the cylinder from the top down, and we get a sense of how this works—the dice organize themselves from a jumbled mass to resting in concentric circles.

While this experiment might sound silly, its approach could  lead to larger things and be used in instances where there’s “an absence of gravity.” Maza and his fellow scientists are now preparing experiments for the International Space Station.

Scientists conducted a cool physics experiment where they twisted and shook 25,000 miniature dice. When shaken forcefully, the dice assemble themselves into perfect concentric circles:

Image and video via Physics.