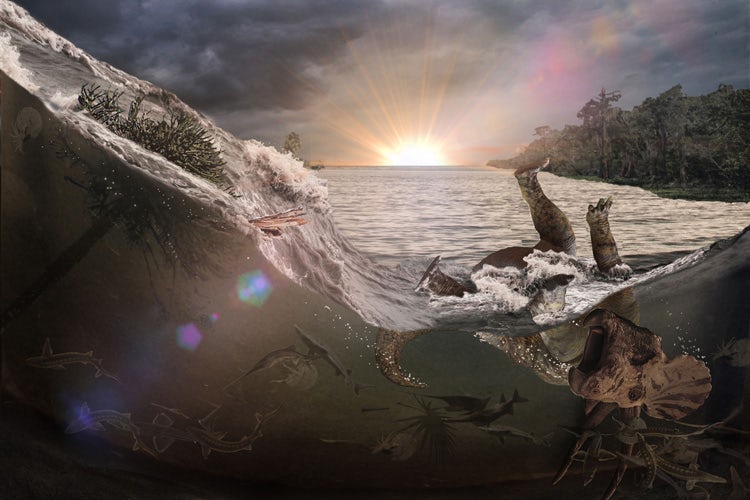 Artist rendering of the wave that swept across the Western Interior Seaway in the aftermath of the asteroid.

Imagine an event so catastrophic that it wiped out 75% of all living creatures on Earth—including the dinosaurs. This may sound like something out of a horror/sci-fi movie, but in reality, it's exactly what happened when the Cretaceous period came to an explosive end 66 million years ago. It's widely believed that an asteroid or comet, known as the Chicxulub Impactor, struck Earth just off of what is now the Yucatan. The event ultimately wreaked havoc on the planet's biodiversity, though how the aftermath unfolded has been a great unknown to mankind. Now, a new discovery in North Dakota unlocks the mystery of the first species to feel the impact of this devastating event.

A team of geologists and paleontologists have unearthed a mass of fossils containing fish and other species. When the asteroid hit, they would have been located in the Western Interior Seaway, a shallow sea that spread across North America during that time. Within one hour of the calamity, giant standing waves called seiches, which were triggered by the impact of the asteroid, pushed the animals all the way to North Dakota. Located near Bowman, geologists refer to the area as Tanis, which was the mouth of a freshwater river teeming with life. University of Kansas Ph.D. student Robert DePalma discovered the fossils and is publishing a study on his findings in the Proceedings of the National Academy of Science.

What makes the discovery so important is that, until now, it had been difficult to get a picture of what exactly happened during this event. By discovering droplets of glass in about half of the gills of the fish—a characteristic of asteroid strikes—DePalma gives further evidence to boost the asteroid theory. The high level of iridium in the material that caps the block of fossils is also important, as iridium was the substance that first gave scientists a clue about the Chicxulub asteroid. 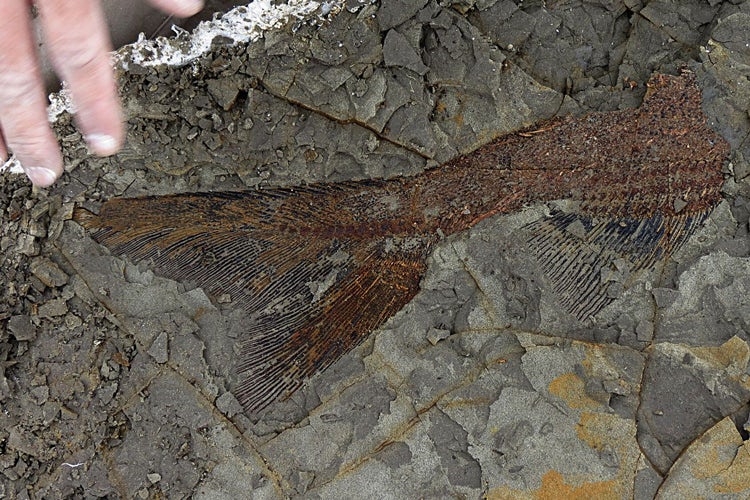 The fossils themselves are in remarkable condition, as it appears that scavengers didn't have a chance to feed on the animals. This is most likely due to the materials that would have rained down on the planet in the hours after the asteroid struck. This sediment would have been packed down by enormous waves of water that alternated with subsequent showers of asteroid rock and ash.

“The sedimentation happened so quickly everything is preserved in three dimensions – they're not crushed,” states article co-author David Burnham. “It's like an avalanche that collapses almost like a liquid, then sets like concrete. They were killed pretty suddenly because of the violence of that water. We have one fish that hit a tree and was broken in half.”

The fossils contain hundreds of unknown species, making it a treasure trove of information about the last days of the Cretaceous age. Already the discovery is helping scientists fill in the void when it comes to the immediate aftermath of this incredible event. “We've understood that bad things happened right after the impact, but nobody's found this kind of smoking-gun evidence,” said Burnham. “People have said, ‘We get that this blast killed the dinosaurs, but why don't we have dead bodies everywhere?' Well, now we have bodies. They're not dinosaurs, but I think those will eventually be found, too.” 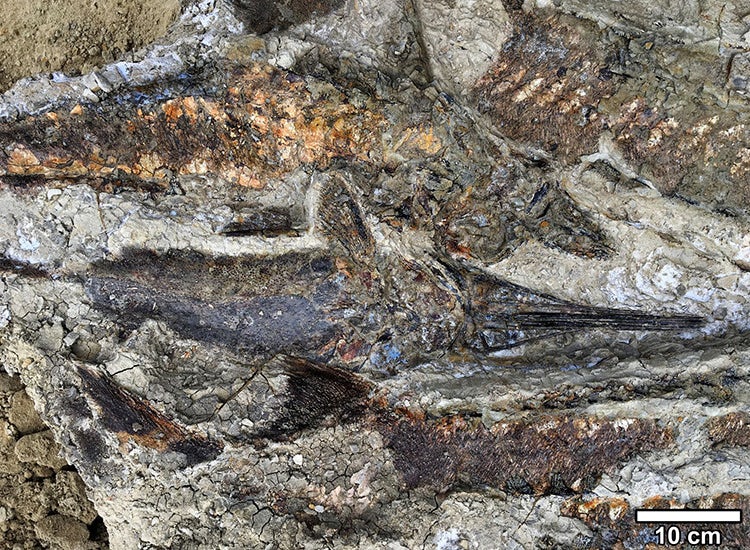 A pile of fossilized fish from the Cretaceous Era.

All images via UC Berkley/Robert DePalma.