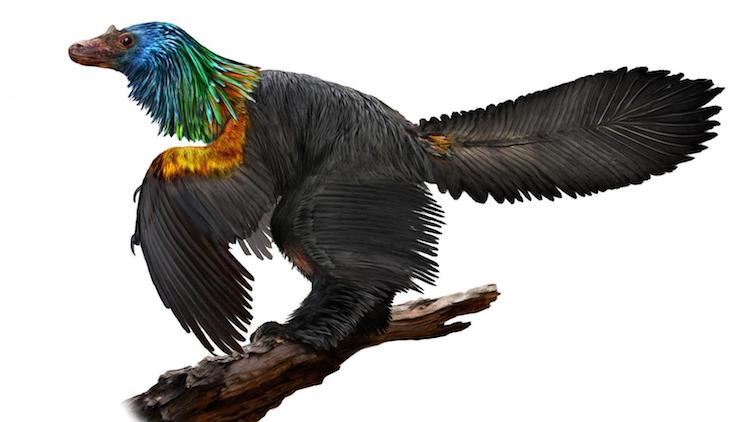 Researchers have recently discovered an unusual dinosaur that appears to be a combination of a colorful hummingbird and a velociraptor. They named the 161-million-year-old dinosaur from the Jurassic age Caihong juji, which translates from Mandarin to “rainbow with the big crest.”

The fossil of this fluffy dinosaur was discovered by a Chinese farmer in 2014, with researchers just publishing their findings in Nature. And while it's well-known that modern birds are the descendants of dinosaurs, this colorful species displays interesting traits that may hold keys to the evolutionary puzzle. Its rainbow feathers, which were probably used to attract mates—just like the iridescent plumes of peacocks—were a stunning discovery.

But just how do scientists know what colors the feathers were? “The preservation of this dinosaur is incredible, we were really excited when we realized the level of detail we were able to see on the feathers,” shared Chad Eliason, a postdoctoral researcher at The Field Museum Chicago and one of the study’s authors. Though the feathers had lost their pigment, this wasn't a problem for researchers, who were able to see incredible detail in the specimens under the microscope.

It turns out, pigment isn't necessary to determine color if you are still able to see melanosomes, the cells that contain pigment. By matching the melanosomes of the Caihong juji with those of modern birds, they were able to determine the colors. Of all the bird samples, the hummingbird came closest to the coloring of this strange dinosaur.

But its rainbow plumage isn't the only thing that makes this dinosaur special. Scientists also found asymmetrical feathers on its tail. While birds use asymmetrical feathers on their wingtips to help steer while in flight, it's fairly certain that Caihong juji used its plumage to attract mates and keep warm, not take to the skies, making the placement of the feathers unusual.

“The tail feathers are asymmetrical but wing feathers not, a bizarre feature previously unknown among dinosaurs including birds,” explained co-author Xing Xu of the Chinese Academy of Science. “This suggests that controlling [flight] might have been first evolved with tail feathers during some kind of aerial locomotion.”

Other interesting features of the dinosaur are the bony crest on its snout, a long and narrow skull, and its short forelimbs that recall modern birds. This mashup makes it an interesting case, as one can see how quickly dinosaurs were evolving. “This combination of traits is unusual,” said Julia Clarke, a co-author of the study and professor at the University of  Texas  Jackson School of Geosciences. “It has a rather velociraptor-looking low and long skull with this fully feathered, shaggy kind of plumage and a big fan tail. It is really cool… or maybe creepy looking depending on your perspective.”