The Incredible Story Behind the Epic Lava Kiss 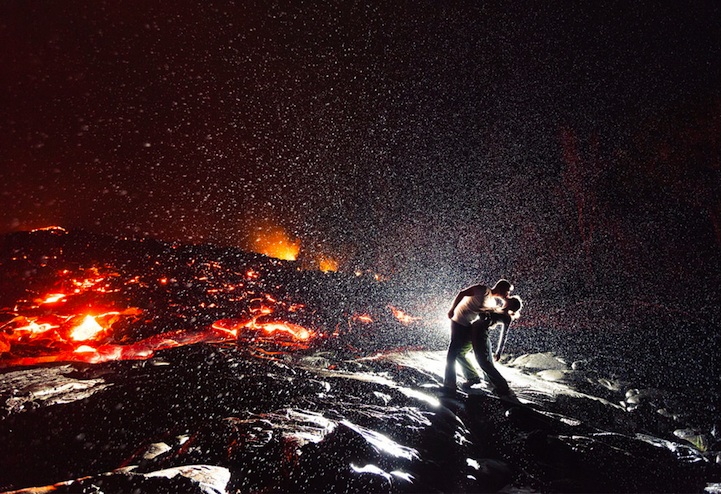 Not since that romantic Vancouver riot's smooch, taken over a year ago, have we seen a kissing photo spread, so quickly, around the web. Honolulu, Hawaii-based Dallas Nagata White is the photographer behind the Lava Kiss, a gorgeous photo taken in front of the Kilauea lava flow in Hawaii. Not only was it raining, real lava was actually flowing in the background! This incredible shot was the last one she took, as her husband spontaneously dipped her and went in for a kiss.

We caught up with the photographer to ask her more about this epic shot.

Was there really no Photoshop involved?
The only time Photoshop itself was involved was for sharpening when re-sizing. Otherwise, it was all Lightroom adjustments, as seen in my Google+ post, here.

Of course, a lot of the Lightroom adjustments “could” be done in Photoshop, but I use Lightroom more in my workflow. I had many people believing I had somehow used digital compositing in Photoshop for the rain/lava/etc. to create the photo when it first started making Internet rounds, so I posted the screenshot to show what I'd done. In all honesty I don't have the patience for detailed composites!

What's been the response been like so far?
So far, the response to the image has been overwhelmingly positive. Sure, this is the Internet with it's obligatory dissenters, but when has there ever been one art piece that has been universally loved? I have had everyone from your average Joe to seasoned professional photographers telling me that they really enjoy the image, or are inspired by it. It is just a spontaneous photo we randomly took while on vacation, and just one small facet of my body of work, but I am really happy that so many people are enjoying it around the world!

What was it like standing there?
It was comfortably warm where we were standing next to the lava. The flow was cooling down really fast, so it was slow-moving and we only needed to move back a few feet once during the couple of hours we were there. We could get within 8-10 feet of the lava before it started getting uncomfortably hot. However, on our hike back to the road, we encountered an open lava river that was moving much faster, and we couldn't get closer than 15-20 feet because it was too hot!

I would also like to note that we went with a State-authorized tour guide from Kalapana Cultural Tours to see the lava up close and personal, and he made sure we were safe during the entire hike.

Submitted to the National Geographic Traveler Photo Contest 2012, the photo first appeared on The Atlantic's popular photo-blog, In Focus, and then went on to sites like Gizmodo, PetaPixel, Huffington Post, and Glamour Magazine. You could say, it's “gone viral.”

Right now, we even have it up as our Facebook cover photo (thanks to a suggestion by one of our fans). As White succinctly writes, it's “love and lava in the rain.” What could be better?