Three Photographers’ Journey Through the Jaw-Dropping Landscapes of Iceland 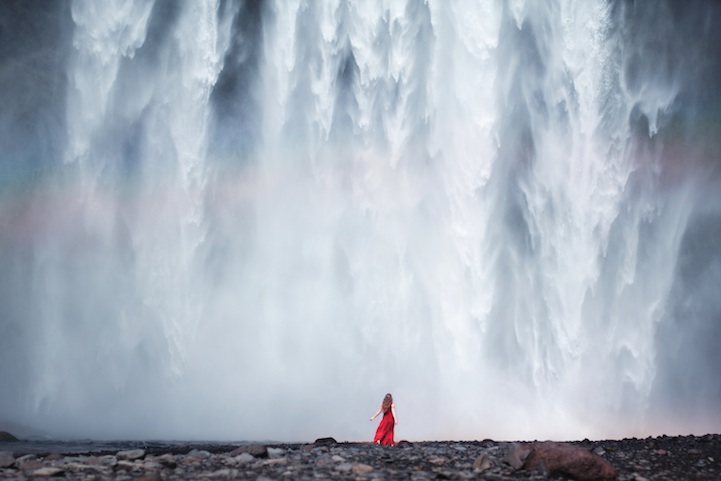 Around this time last year, photographer Elizabeth Gadd decided that she would visit the number one country on her bucket list, Iceland. She convinced her two photographer friends, Rob Woodcox and Whitney Justesen, to join her on this once-in-a-lifetime trip. Soon, they had their tickets book and for the next several months they would organize, fundraise and plan. Finally, on the 14th of May, they arrived in Reykjavik, Iceland. Over the course of the next two weeks, they would drive their rental car around, seeking out the most spectacular places to shoot.

Gadd takes us on this epic adventure by showing us her breathtaking shots and giving us the scoop on what it was really like. “The landscapes in Iceland are some of the most incredible I have ever seen,” she tells us. “It really struck me how many different landscapes all fit into this one magical place. We could be driving through endless expanses of moss covered rocks, and then suddenly we’re in giant green mountains with waterfalls pouring off the ledges and down every crevice, and the next moment we’d find ourselves back in flat fields of black sand that would stretch on for miles. And then we’re back in the mountains, driving past glacier after glacier, all the biggest glaciers I’ve ever seen coming down in every valley between the mountain peaks.

“The beaches in Iceland are incredible, the powerful waves beating against the black churning sand. We drove through snowy plateaus and green rolling hills, through rocky mountain passes and calm lake-side forests. There were prairie-like fields of grass, and then endless zig-zagging gravel roads around the mountains and ocean of the West Fjords. There were hot springs and geysers, glacial lakes and icebergs, rainstorms and sunshine, wind and snow. The diversity of the landscapes and weather alike had me hooked from the start, each one beautiful in its own unique form.” 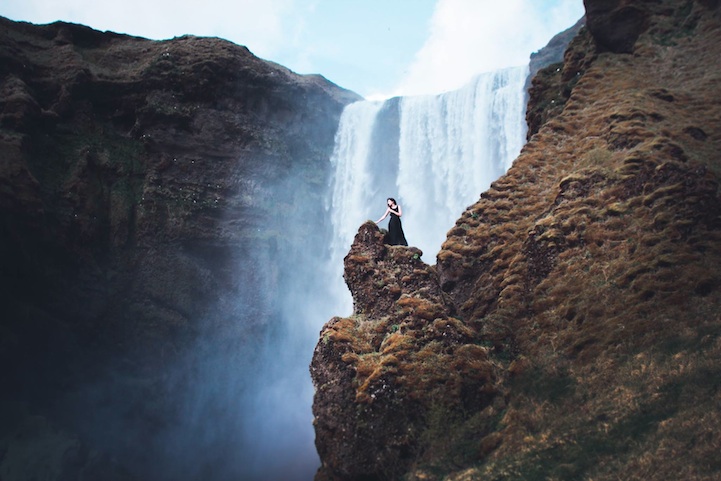 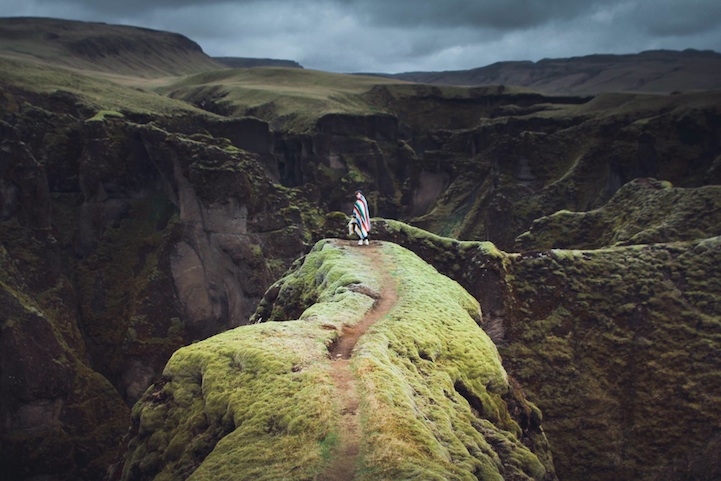 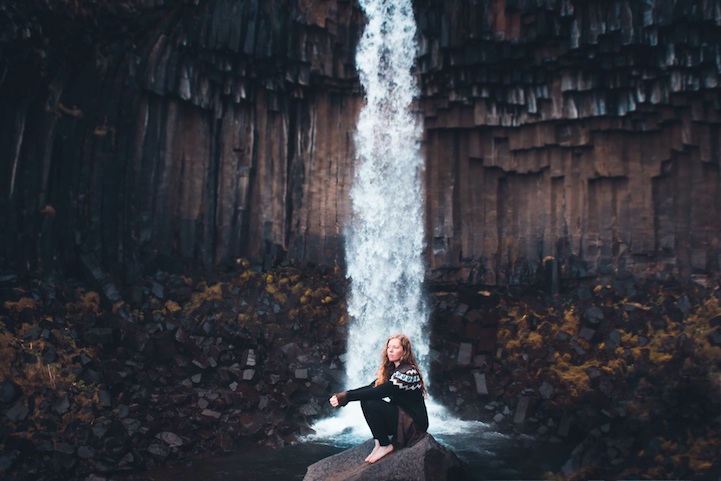 “Lost in Her Reverie”: A self-portrait of Elizabeth Gadd from Svartifoss in Iceland. 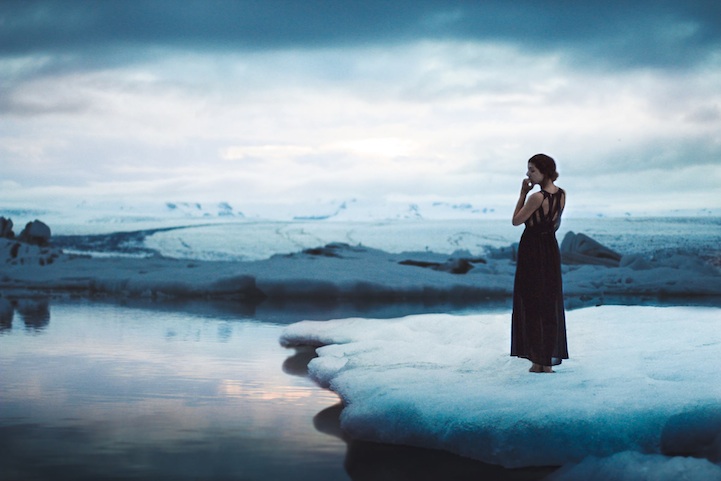 “Alluring Midnight”: Once upon a freezing time Whitney Justesen stood bare-footed out on a free-floating iceberg at Jokulsarlon Glacial Lagoon at midnight and she didn’t die. 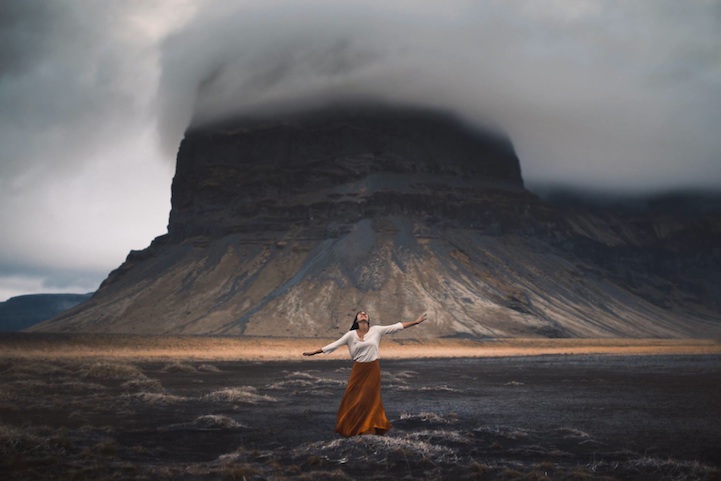 “The Whirling Winds”: I am completely and utterly in love with Iceland. Editing all these photos from our adventures there in May is killing me, I am so ready to return to this beautifully strange place right about now! 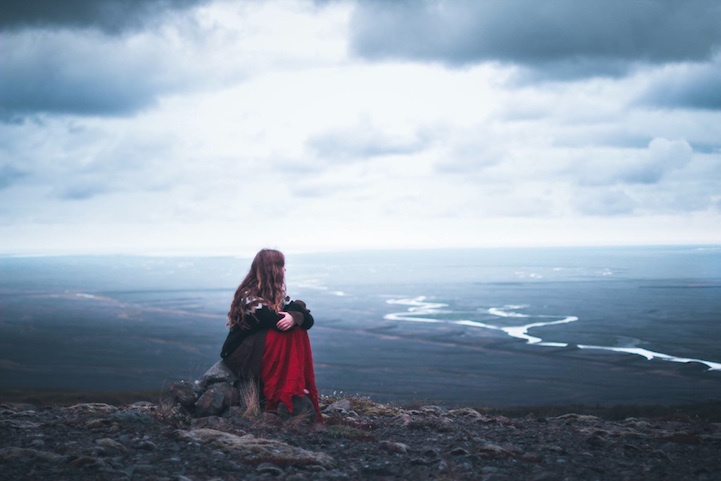 “The Art of Being”: Another self-portrait from Iceland. While my adventure companions were shooting at Svartifoss waterfall below, I continued to climb up the mountain for a little silent time and reflection. The view was unlike any I’ve seen in my life, rivers sprawling across the black sands for miles. It was so strange and beautiful. 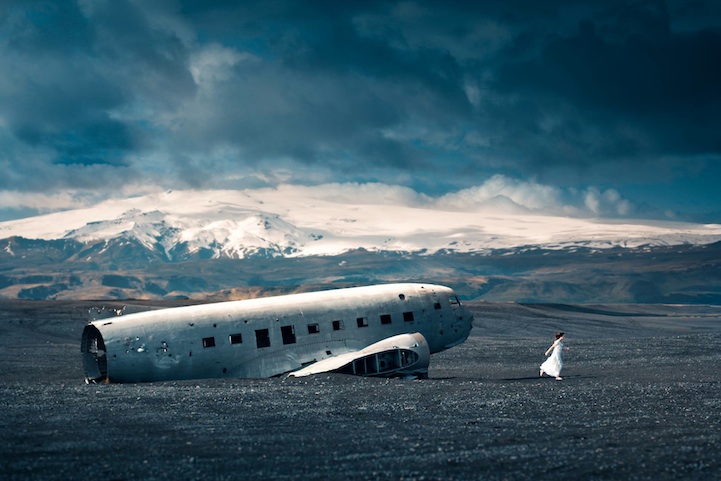 “Press Onward”: Photo taken with Whitney Justesen at a plane wreck in the south of Iceland. 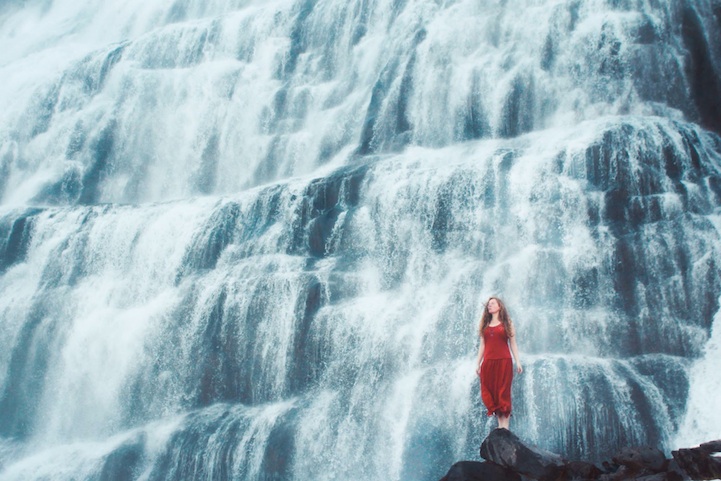 “Exist”: The newest image from my Icelandic red dress series. The waterfall is the most magnificent Dynjandi, which we spent all night driving on slippery gravel roads up and down mountain cliff-sides as we navigated through the West Fjords to get to, by 3:00am (only 5 hours later than we anticipated). Suddenly, right after this photo was taken, the sun came over the edge of the mountain and I felt immediate rays of warmth competing with the icy wind and water on my skin. I soon, and rather gladly, gave in to the sunshine and followed its warmth away from the falls and back to my socks and boots. I layered up and sat in the sun and let the numbness ease away. I breathed in and I breathed out. I thought again, how beautiful it is to exist. 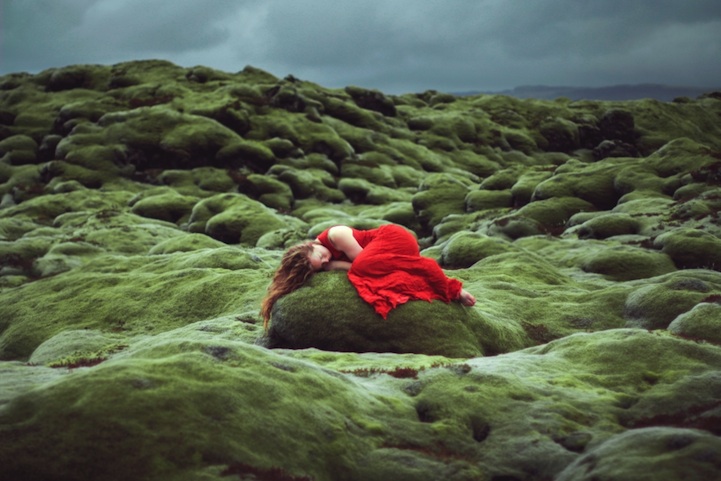 “Graceful Divergence”: You’ve probably noticed by now the red dress in all my latest photos from Iceland. A couple reasons for that: A. I had very little room in my traveling suitcase for extra outfits, especially considering I had to save suit-case space for transporting chocolate (yes, that was my most vital necessity for the trip), and B. When I was thinking ahead about creating an Icelandic self-portrait series, I wanted something that would depict “standing out”. Not just a bright color to stand out against the Icelandic backdrops, but more something of a reflection of my thoughts as of late. 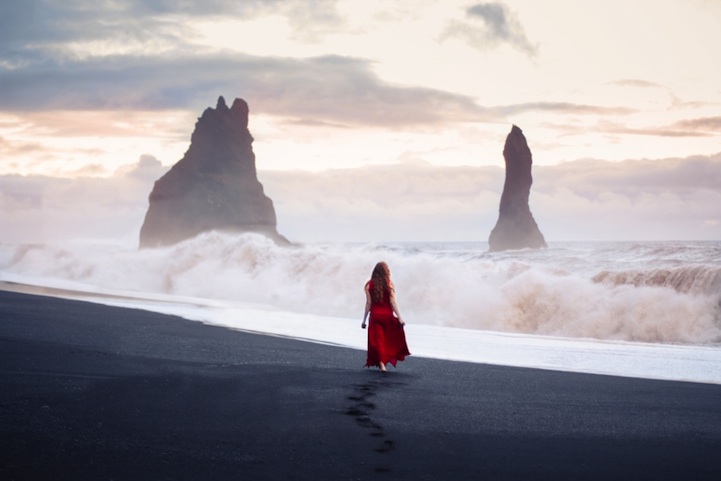 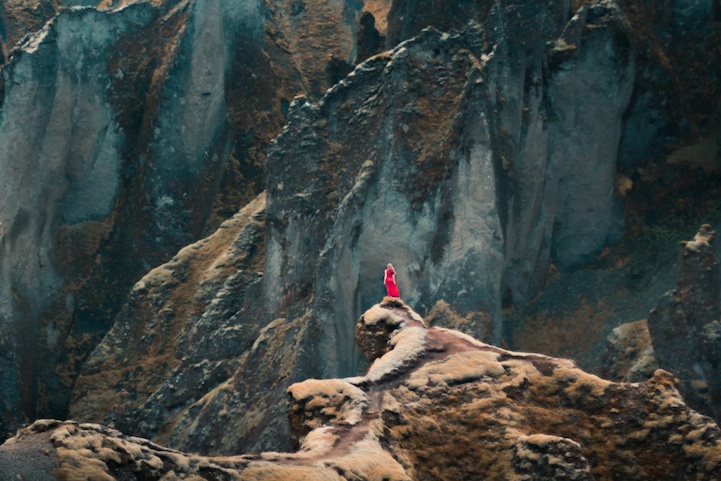 “Breathe”: Balancing on the top of a clump of moss, overhanging the very edge of a 100 meter drop at Fjadrargljufur canyon, with rain spattering in my face as the freezing wind whipped my dress and hair every which way, and my mother of a Whitney Justesen screaming for my life in the distance, was altogether probably one of my most thrilling Icelandic experiences. 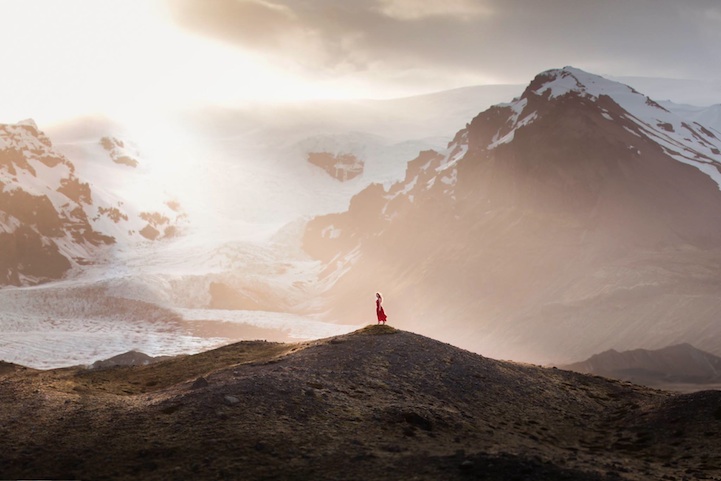 “Take It In”: The last photo from my Icelandic red dress series. If I had to choose a favorite moment from our two-week adventure, the evening this photo was taken would probably be it.

When we asked her what tips she could give others about shooting photos in Iceland, she said, “Bring warm and waterproof clothes and something to cover your camera from the sudden bursts of rain! There were multiple times when we’d be out shooting, everything going nice and smoothly, and suddenly a rain or hailstorm would come out of nowhere to chase us and our poor drowning equipment all the way back to the car.

“But my other tip, if you’re brave:  Be ready in those moments. Take advantage of the cold and the rain and the snow. Several of my favorite photos from the trip were taken during the most uncomfortable, and always freezing, circumstances. There were a few times when we were driving, saw a perfect scene for shooting, but didn’t want to suffer the weather for it. I regretted each of those moments. In my case, I always found that the more effort I put into my art, the happier I was with it, and always ended up with more interesting stories to tell!”