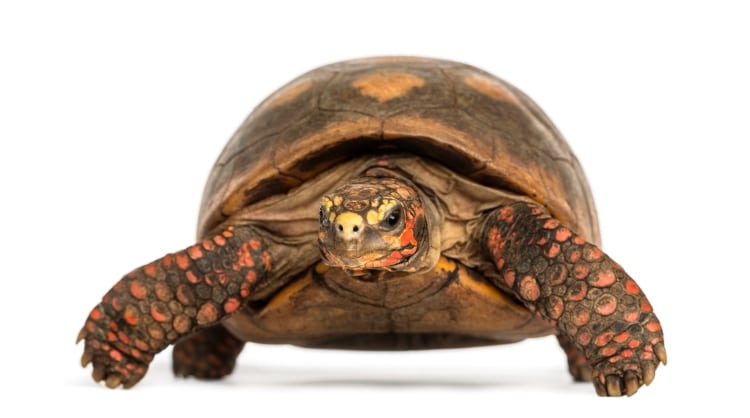 As any pet owner would know, losing a beloved animal can be hard, but it can be especially difficult to cope with a pet that’s gone missing. There’s no real closure. In the 1980s, a family in Rio de Janeiro, Brazil—the Almeidas—experienced this with their pet tortoise named Manuela. The reptile was the beloved pet of a then-8-year-old Lenita de Almeida. During a renovation of the family's home, the reptile suddenly vanished. The builder working on the house had left the gate open that day, so everyone assumed the tortoise had run away. Little did they know that they’d be reunited decades later.

When the tortoise first went missing, the Almeidas searched for her and asked neighbors if anyone had seen a red-footed tortoise roaming around. Unfortunately, no one had, which eventually led them to assume Manuela was gone for good. Thirty years later, in 2013, the family's patriarch, Leonel de Almeida, passed away. During his life, he was handy and also a bit of a hoarder. He had a habit of picking up anything he thought he could fix and then would store it at home. “If he found an old television, he thought he could use some part to fix a new one, and so he kept accumulating things,” explains Lenita. He accumulated so many things that his collection of appliances and spare parts filled a bedroom, and the home's entire attic. After his death, his family, who hadn't visited the attic in years, began to clear away these items. What they didn't know, as they sifted through decades' worth of odds and ends, was that they were in for the surprise of a lifetime.

“I put the garbage bag on the floor, and the neighbor just told me, ‘Are you going to throw the turtle away, too?'” says Leandro de Almeida, Leonel's son. There, in the box of an old wooden speaker, was a familiar-looking red-footed turtle. “We were shocked!” Nathalye de Almeida, Lenita's daughter, admits. “My mom arrived crying because she didn't believe it. They found Manuela!”

The whole family was thrilled to find their tortoise alive and well, but baffled as to how she survived hidden in an attic for 30 years. At the time, professor and veterinarian Jeferson Pires described the resilience of tortoises, explaining that they can go up to three years without eating. Red-footed tortoises are omnivorous, and the family thinks Manuela may have subsisted off of termite larvae. Still, many people have raised concerns about the probability of this survival story—even though tortoises can go long periods of time without food, they still need water and sunlight, and it is unclear how Manuela had access to those things. Some wonder if it's even the same tortoise, or if the Almeidas’ father had been looking after the pet, unbeknownst to his family.

Regardless, the Almeidas are happy to have Manuela in their lives again. Now, nearly 10 years after being found (and 40 years after going missing) Manuela has since been identified as a male and goes by Manuel, and is thriving under the care of the younger generations of the family. “He's grown a lot,” says Nathalye. “I brought him in to live with me because I have a lot of affection for him.” Best of all, her mother still visits her childhood pet weekly, and is delighted to see her daughter and granddaughter bonding with the special tortoise. “She feeds him, pets him, and kisses him,” says Nathalye. “He's part of our family.”

While cleaning out their attic, the Almeida family was shocked to find their mother's childhood pet, a tortoise named Manuela, believed to have gone missing 30 years earlier.

The family thinks the tortoise may have live off of termite larvae in the cluttered room. However it survived, they're thrilled to have this special pet back in the family.