Bronze artist Kristen Visbal gives a whole new meaning to the phrase, “take the bull by the horns,” with her 4-foot bronze sculpture of a defiant girl that was recently installed on Wall Street. Hands on hips, head cocked back confidently, she stares down the infamous Charging Bull sculpture.

The piece, which was installed between 4 a.m. and 6 a.m. the day before International Women's Day, was commissioned by State Street Global Advisors as part of their quest to include more women on company boards. Titled Fearless Girl, the diminutive bronze statue already has its own Wikipedia page, and appears to be a hit with the New York crowds, which gathered around to take photos for Instagram and Twitter.

“What this girl represents is the present, but also the future,” Stephen Tisdalle, State Street's chief marketing officer shared. “She’s not angry at the bull—she’s confident, she knows what she’s capable of, and she’s wanting the bull to take note.”

The cast bronze sculpture has permits for a month-long installation, though McCann, who assisted State Street with the project, is negotiating with the city for a more permanent stay.

For State Street, Fearless Girl is more than a piece of public art—she's a call to arms. The money manager will be sending out letters to 3,500 companies, asking them to increase the number of female board members, and voting against companies who fail to take action. As a huge player in the index fund world, they have the clout to put pressure on the companies who would benefit from their investments.

More women in power isn't just about equality, it also makes good business sense. An MSCI study suggested companies with strong female leadership saw a return on equity of 10.1% per year, versus 7.4% for those without women at the top. However, one-quarter of Russell 3000 companies don’t have a single woman on their board, and nearly 60% of boards are less than 15% women. 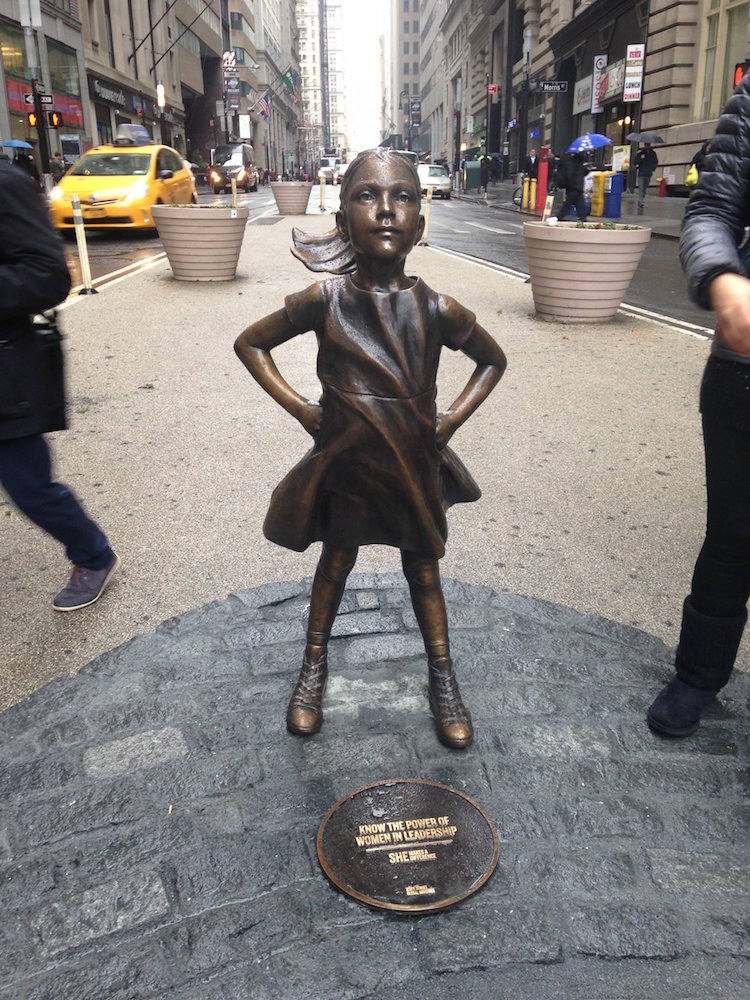 So who is this defiant, take charge little girl looking to change the way companies do business? Visbal shared that it was modeled on two girls—one the 7-year-old daughter of a friend and the other a 9-year-old Latina. “This is a piece of work all women of any age, shape, color or creed can relate to,” the artist revealed in a statement. “A work which reminds us today’s working woman is here to stay and has taken her place in the nation’s financial district.”