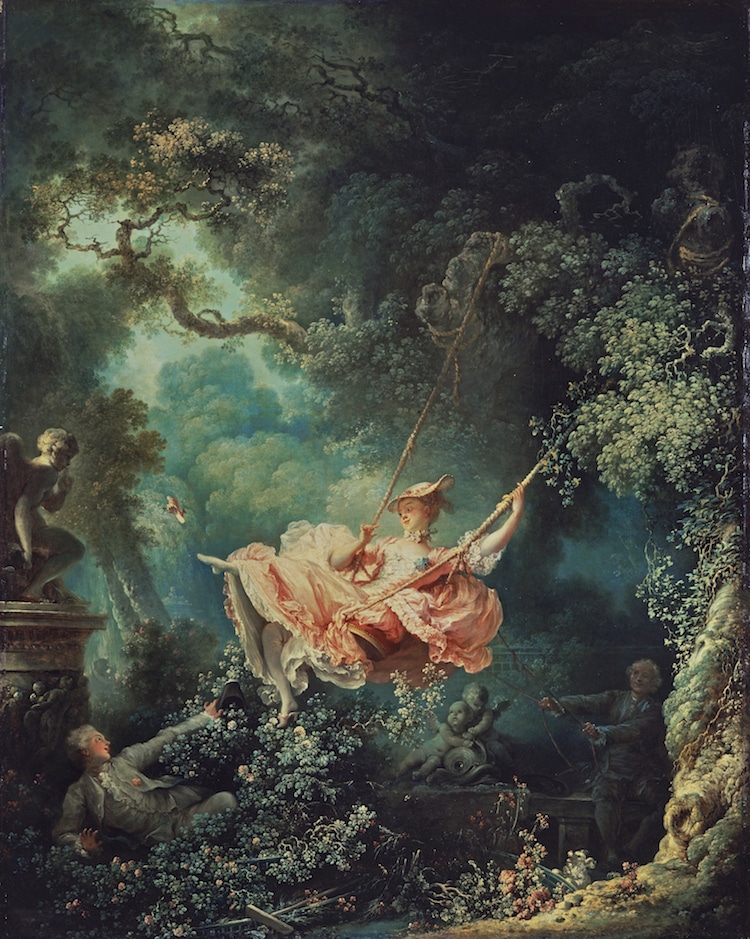 Rarely is a painting so delicious to the eyes as the sumptuous, candy-colored world of The Swing. An icon of the Rococo art movement, this masterpiece stars a coquettish leading lady flying between two besotted gentlemen on a swing, against the backdrop of a lush, fantastical garden.

For the casual viewer, The Swing may appear to be a scene of love at first sight; but, understanding the provocative symbolism layered in the painting provides a whole new perspective on the decadent world created by painter Jean-Honoré Fragonard. The artist completed L'Escarpolette (The Swing) in 1767 for the Baron de Saint-Julien, who wanted a flirtatious portrait of his mistress. Today, it is remembered as Fragonard's most successful and beloved work of art.

To fully appreciate this enduring masterpiece, one must look to the rise of Rococo and the traditional symbols present within the details of the painting.

Following the extravagance and power of Baroque art came the lighthearted and flirtatious Rococo movement, which blossomed in 18th-century France before spreading to other European countries. The term Rococo derives from rocaille, a method of decoration using pebbles, seashells, and cement to adorn grottoes and fountains in the Renaissance. During the 1730s, the rocaille decoration inspired scrolling curves in ornamental furniture and interior design.

In painting, this decorative style transferred to a love of whimsical narratives, pastel colors, and fluid forms. Both in aesthetics and subject matter, The Swing was clearly a work of this newer era of Rococo art. 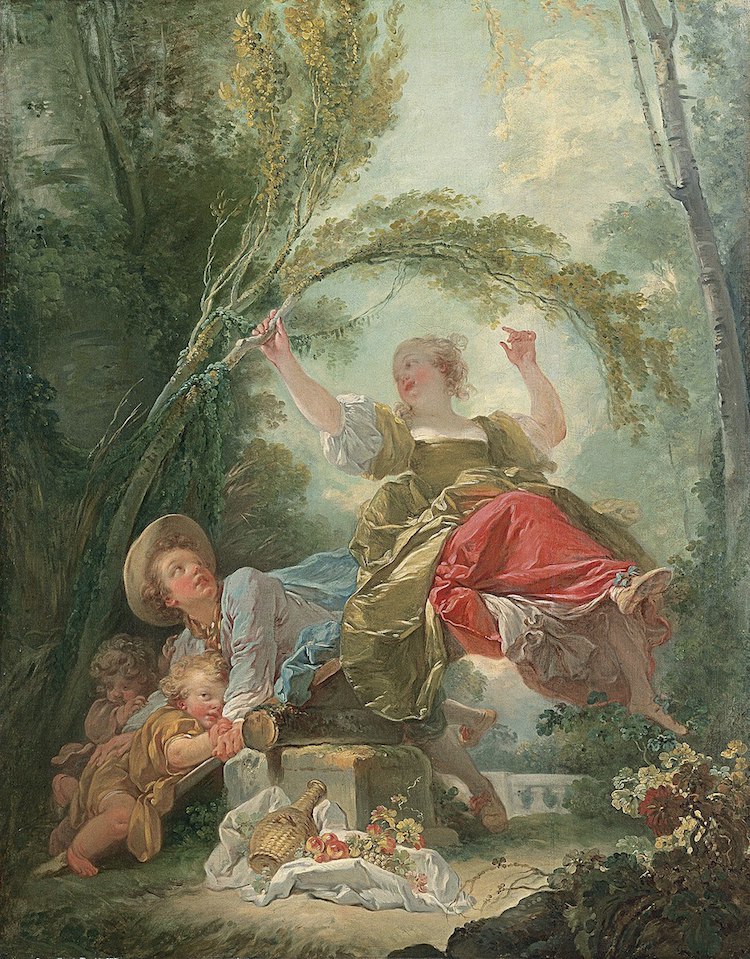 Now regarded as one of the greatest painters in the Rococo movement, Jean-Honoré Fragonard's prolific career was characterized by outstanding success in genre paintings of merriment and veiled hedonism. Likewise, the story of The Swing begins with the commission request by Baron Louis-Guillaume Baillet de Saint-Julien, who wanted a portrait of his mistress. The Baron was very clear in his salacious intentions, specifically asking that in the painting his mistress was pushed on a swing by a bishop, while he (the Baron) looked up his mistress's dress.

While most painters of the time shied away from the task, Fragonard happily undertook the project. Depicting sensual, indulgent scenes was a comfortable specialty he was lauded for as an artist. In the end, however, Fragonard did make one omission from the original request, and exchanged the figure of a bishop with the more acceptable character of a cuckolded husband.

Clearly Fragonard had no qualms in fulfilling the Baron's bawdy requests as one glance at The Swing shows that the painting is bursting with incomparable glee and rapture. The star, wearing a fluffy, ballet-pink dress, flies on a luscious red-cushioned swing through the outlandish foliage until she kicks her pink mule off of her foot, letting the ecstatic gentleman below see up her skirt.

At the time, the swing was considered to be a conventional symbol of infidelity—a request that perhaps titillated the Baron. And the young woman, who deliberately kicks off her mule and lets the admirer see her legs, is overtly initiating a flirtatious game between herself and the man below. She even sends her pink slipper flying in the direction of a winged marble statue that greatly resembles Cupid, the Roman god of love and desire. All of this while the infatuated lover extends a suggestive, phallic arm. 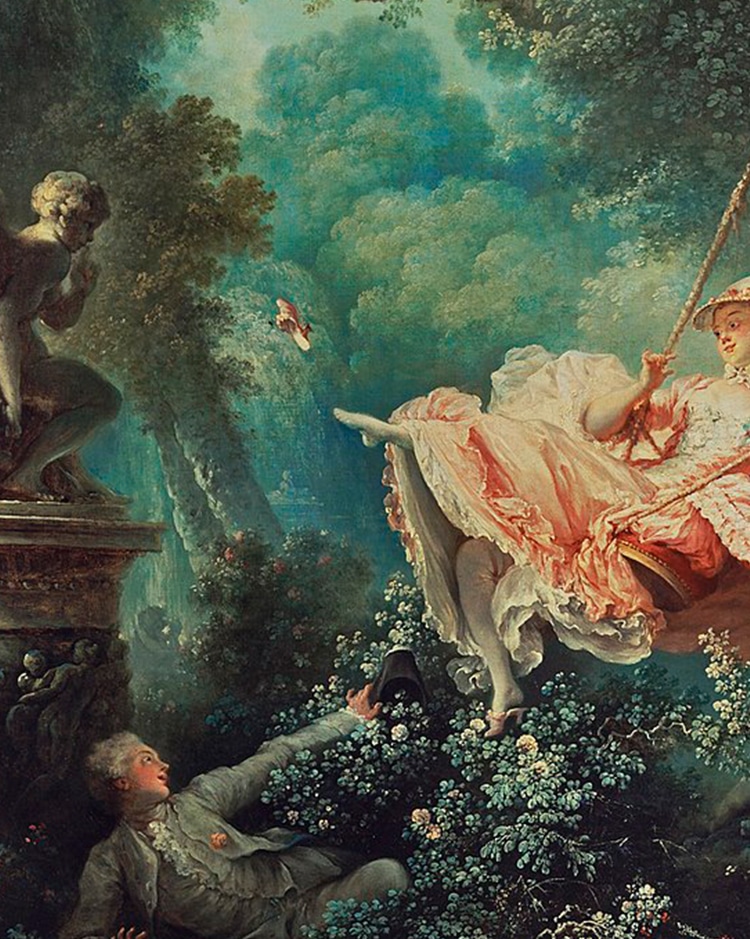 Other symbolism to look at in The Swing is the small dog in the right foreground. The dog, which is traditionally a motif of faithfulness, barks in the direction of the lady's flirtations to give warning, but the old husband doesn't hear. Additionally, the two putti statues look in the direction of Cupid, who has raised his finger to his lips to hush them while the amorous game goes on. 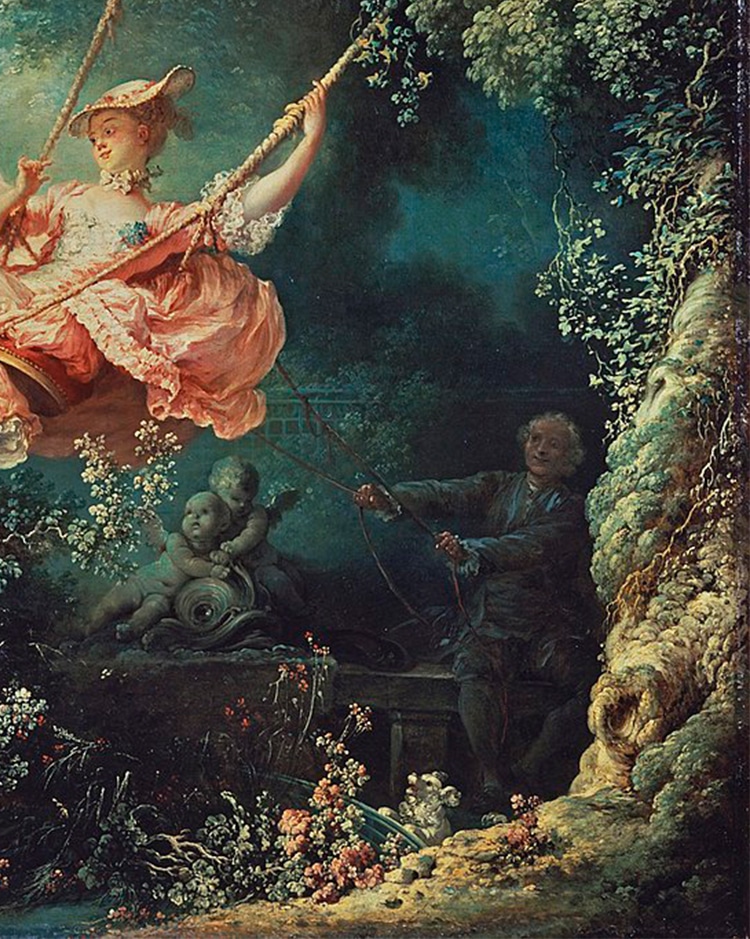 Legacy of The Swing

Today, The Swing hangs in the Wallace Collection amongst other acclaimed Rococo works in London, England. Due to the painting's frivolity and romantic whimsy, it remains highly celebrated and even referenced in popular culture and fashion. Most notably perhaps is by fashion designer Manolo Blahnik, who designed a Swing-inspired pair of shoes for Sofia Coppola's film Marie Antoinette.

Although not as innocent as it may seem, perhaps The Swing endures in modern times because its candy-colored mirth is simply too irresistible. 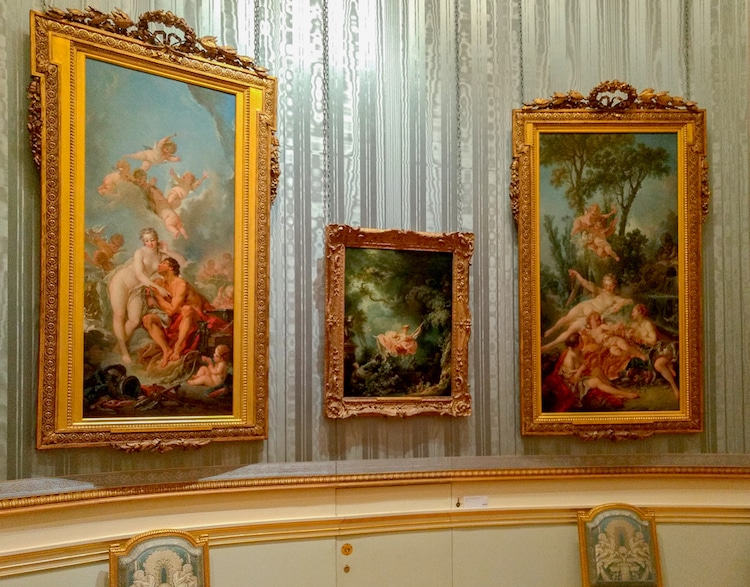