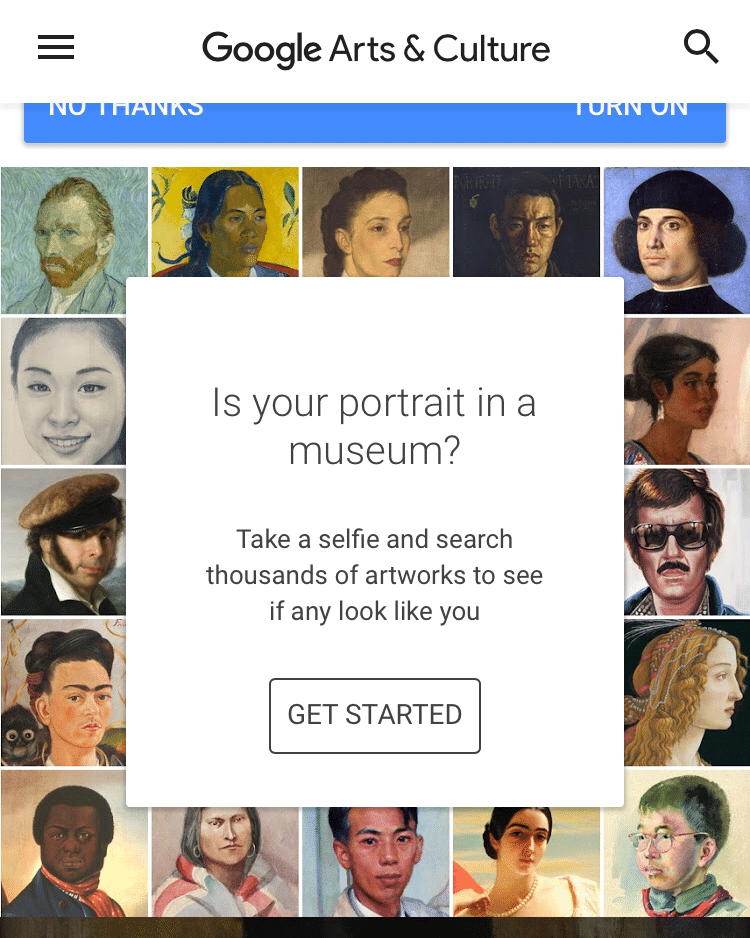 In the age of social media, how we interact with art is constantly being redefined for our increasingly connected world. Museum Snapchats and memes have people reimagining paintings and sculptures as if they existed in our world, with both brilliant and silly results. The Google Arts and Culture app is one of the latest ways that you can enjoy art history through technology. The app, though launching in 2016, has recently released a new feature that pairs your selfie with an art doppelgänger.

The app is extremely simple to use. Once downloaded, you are prompted to snap a selfie. After that’s done, you’re matched with several paintings, in a variety of artistic styles, that have an essence of your looks. Some of the picks are extremely flattering. Others, not so much—but these ridiculous comparisons are a big part of the app's fun. (And all the more reason to share on social media.)

So, how does Google find your match? The app uses automated image analysis to compare the similarities in your face to thousands of works of art that are shared with Google by museums and institutions around the world. And once you’ve exhausted yourself of selfies, check out the rest of the Google Arts and Culture app; through it, you can do things like zoom in on amazing masterpieces to see all of their incredible details.

Are you a Mona Lisa? Or a van Gogh? Find out with the Google Arts and Culture app.

The app will match anyone with their art doppelgänger. Celebrities have even tried it!

This google arts and culture app is pretty amazing. Feel real strong about my 40% pic.twitter.com/2iyexRkUG5

Hey this one ain’t so bad. pic.twitter.com/er0FxZNVO8

As well as many, many more people across the internet.

What you talkin' bout Willis. pic.twitter.com/e8kykWIv0s

I tried messing with the google arts and culture app and it owned me incredibly hard pic.twitter.com/aF9qAlLZOa

I'm pulling the hell out of that pretzel pic.twitter.com/RRZVtgmdWj

I’ve taken like 20 selfies with the Google arts & culture app and gotten this horrifying guy as my top result EVERY SINGLE TIME, who do I sue pic.twitter.com/PjuvT0IXIU

Just got owned by Google Arts and Culture app. pic.twitter.com/RTQCPQ3AR1

Google Arts and Culture App comin’ in with a sick burn pic.twitter.com/6dzeW8ZUFL