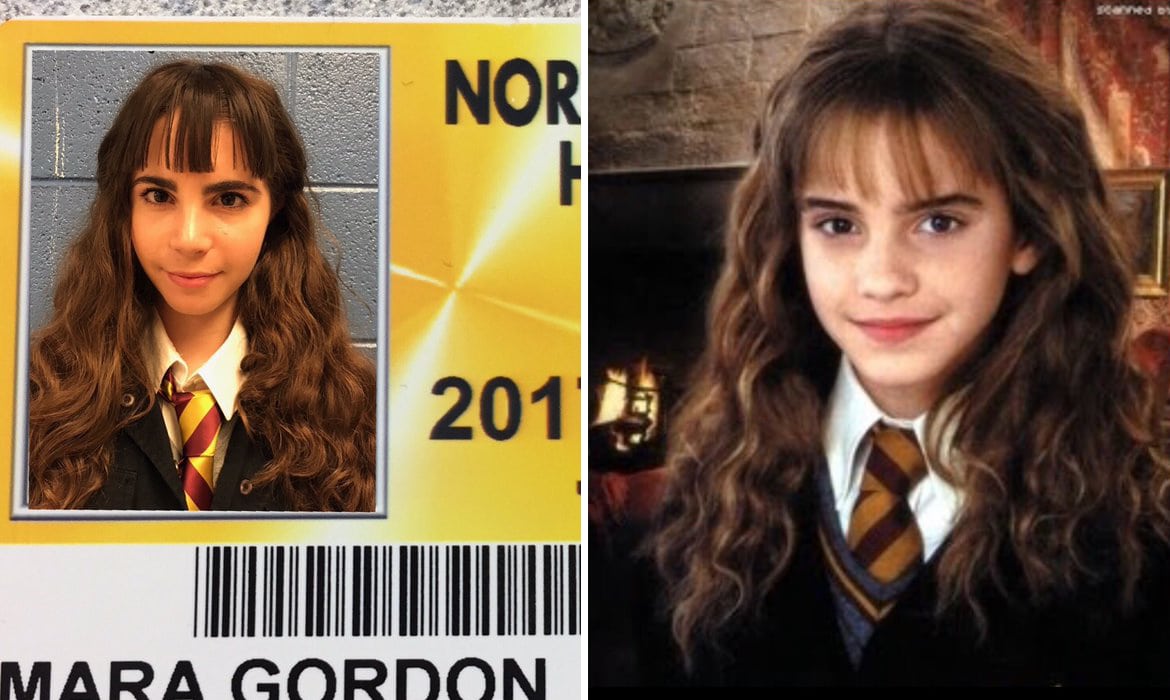 By the time your senior year of high school rolls around, you’re ready to graduate. But why not have some fun while you’re eagerly waiting to don your cap and gown? The senior class at the North Farmington High School in Farmington Hills, Michigan starts the year off right with a quirky tradition; they're encouraged to dress up in costume for their school ID photos.

Hilarity ensues as the class of 2018 channels different characters from popular culture. From books to movies to memes, there’s a wide array of get-ups that go well beyond a conventional crisp blouse and forced smile. Characters from Harry Potter, Toy Story, and Bob’s Burgers are just a few of the personas that these young people take on. Others imitate folks in real life, such as Donald Trump's hair and his use of HUGEEE. There's even one student who dressed as the viral “girl goes crazy for cotton candy” meme.

Many of the participating students shared their funny school ID pictures on Twitter using the hashtag #NFID18. Their tweets, which introduce their characters, are the icing on the cake to this creative custom.

Each year, the senior class of North Farmington High School in Farmington Hills, Michigan partakes in a quirky tradition.

@RickandMorty how do you like my #NFID18 ? Wubba lubba dub dubs!! pic.twitter.com/757V6SKRZU

They told me I couldn't do blood and gore so I said “Oh, you got it, dude.” #NFID18 pic.twitter.com/rkKiZ2RBnB

From books to movies to memes, the imaginative costumes are a fun way to start the students' final year.

“Go on an all-night mission with *you*? Sorry, but Numbuh 5 is gonna be busy NOT doing that. #NFID18 pic.twitter.com/Y0kvnU9aH8

Mom get out of my room Im experimenting #NFID18 pic.twitter.com/ySy3uthqWR

There's a snake in my boot pic.twitter.com/Ioge8UNAcJ

FISHY! WHY ARE YOU SLEEPING?! #NFID18 pic.twitter.com/F7VPzQ6Vax

Your ass is grass and I'm gonna mow it #NFID18 pic.twitter.com/G6EiRurK4d

Quality is our recipe! #NFID18 pic.twitter.com/rKwGpUyNaa

“When you think of trash, think of Akeem!” #NFID18 pic.twitter.com/K9fXz57S1n

“Why don't you smile more?” #NFID18 (my sister doesn't have a Twitter) pic.twitter.com/xmqb1jL2k4

You're saying it wrong. It's wing-GAR-dium levi-o-SA, make the gar nice and long. #NFID18 pic.twitter.com/ZA6VDRkwMc

Awesome job by all that participated in #NFID18 today! You all looked great pic.twitter.com/RMdhysjMcT