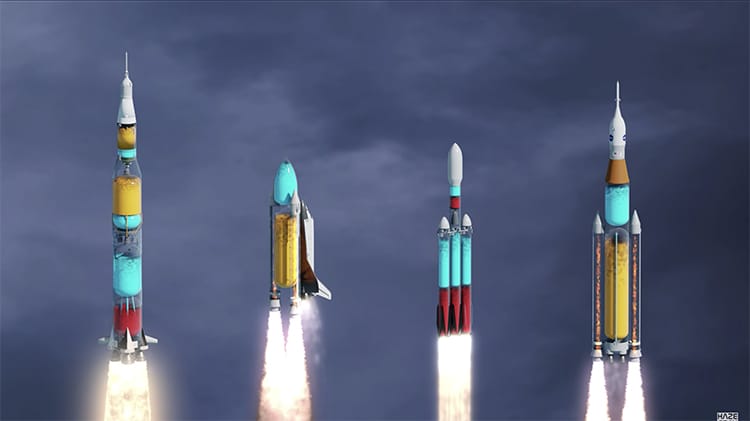 Still from “If Rockets Were Transparent” by Haze Gray Art

On November 16, a modern rocket delivered the four astronauts aboard the SpaceX Crew Dragon to the International Space Station—orbiting 254 miles above Earth. This incredible feat is not only historic, but also one that has piqued people's interests in space travel and the mechanics behind it. Have you ever wondered what is inside a rocket? YouTuber Hazegrayart helps curious fans of space exploration understand the inner workings of these spacecrafts in a fascinating video featuring four rockets with translucent outer shells. As you watch the transparent rockets rise through the atmosphere, you can see the burning fuel and shedding of weight which is necessary to escape Earth's gravity.

The enlightening video highlights four types of rockets—Saturn V,  Space Shuttle, Falcon Heavy, Space Launch System. The three common types of fuel found in these sorts of spacecrafts are color-coded to be easily visible as the rockets use combustion to propel themselves skyward. The first—Saturn V—was the incredibly powerful rocket used between 1967 and 1973 by NASA. Capable of dragging heavy payloads out to orbit, the model uses three fuel stages. The Space Shuttle is another NASA craft, known for bringing satellites into orbit. Space X's Falcon Heavy is also included. A powerful rocket first launched in 2018, it features side boosters for extra power which can be ejected when no longer needed. Lastly, the NASA Space Launch System is included—although it has not yet launched. The craft will feature in NASA's attempt to return to the moon by 2024.

Rockets promise to help humanity explore space, beginning with our closest neighbors in the Solar System. The recently launched SpaceX Falcon 9 rocket makes history as the first privately owned space craft certified by NASA to carry astronauts. As government space exploration collaborates with private industry, the science of rocketry will continue to evolve.

You can learn more about NASA space crafts throughout the years—and where the future may lead—on NASA's website.

With the Space X launch of Crew-1 to the International Space Station, a new era in space travel begins.