Interview with the Book Surgeon (7 pics) 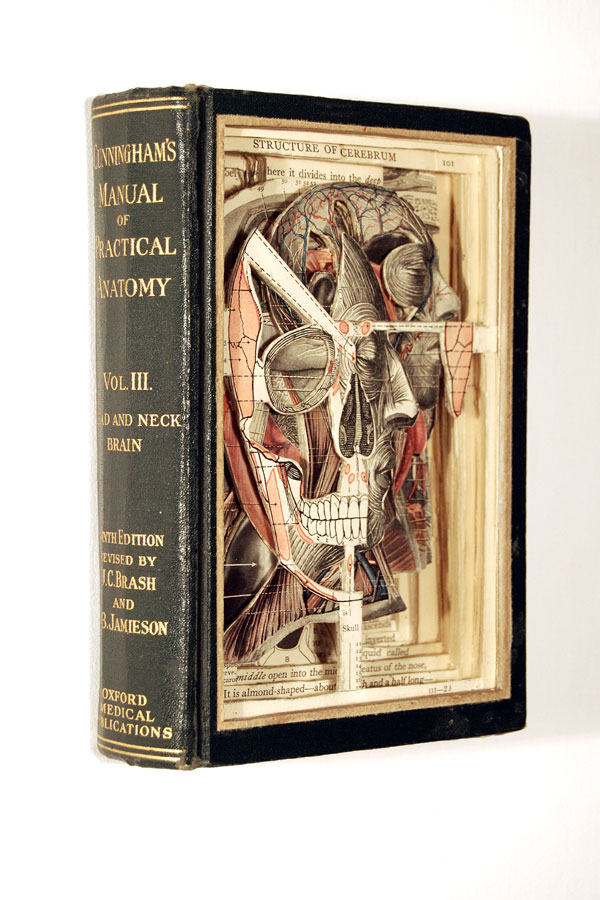 The last few days of February brought hundreds of thousands of visitors to My Modern Met thanks to the incredible work of Brian Dettmer, aka The Book Surgeon. In fact, even bookstores could appreciate Dettmer's incredible art with Harvard Books recently tweeting, “I suppose we don't necessarily recommend you do this to your books, but WOW. It's the work of the ‘book surgeon.'”

We got in touch with Dettmer to ask him a few questions about how his style has evolved over the years. (On a side note, the artist said at the beginning of his email to us: “My inbox is flooded from the resent surge in blogs – the recent wave all started by your site – thanks)!” Read our interview with him below as you enjoy more of his fantastic work. 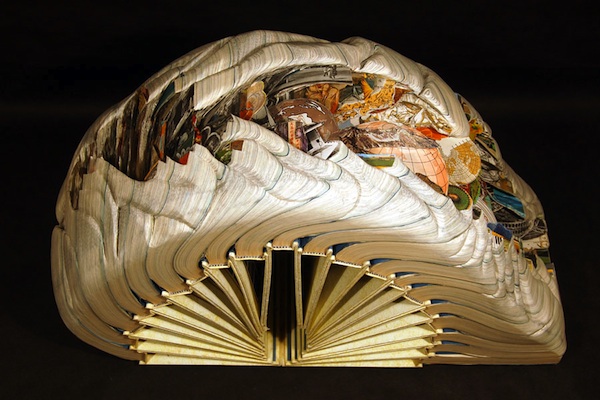 Can you give us any background stories on your favorite piece?
I think one of my favorite pieces is New Books of Knowledge (as shown above). I had been working on single books and began to experiment with combining multiple books around 2007-8. This piece was one of the first pieces to combine a complete encyclopedia series on one single piece successfully.

It works as a landscape but also as an organism, consisting of several singular components making a larger form. I began by bending all of the covers of the books on themselves and gluing them in this way. Then I experimented with the thin, pie like sliver shapes the covers made and realized I could get a radius from setting them onto each other. After connecting them all and sanding down the pages to create a large solid form I had a great block to begin carving. The development of the piece took weeks before I even began to carve. I had no idea where it was going to end up when I began. 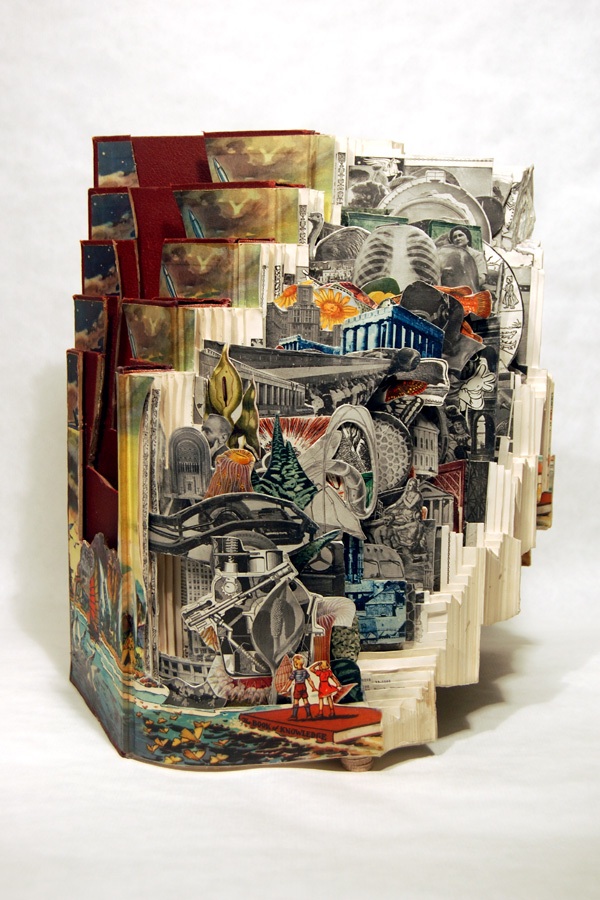 Has your work evolved over the years?
I hope so. I try to push the possibilities with every new piece or series I do. I began working with books around 2001 and carving into them the way I do around 2003 but it wasn't until about 2007 that I began to combine multiple books and really push the forms of the single books as well. So, I would say the scale, the detail, and the variety of approaches has really evolved over the past few years.

A lot of people think there is a limit and ask where I can go from here and then they are surprised when they see how much my work has changed since the show before. A lot of my work is intuitive when I'm developing it and then chance plays a major role before I begin carving so I never know where something will end up. 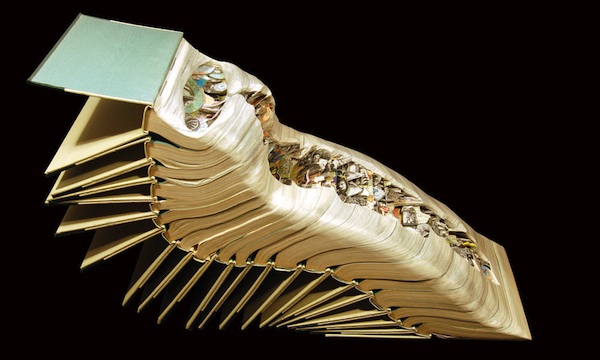 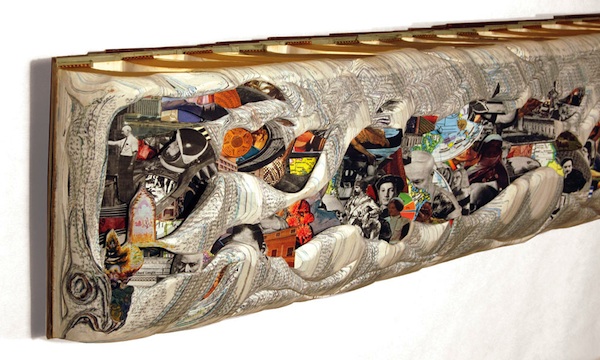 What do you hope others get out of your art?
I like my work to work on several levels. Some people may get caught up in its physical presence and get wrapped into the beauty or detail of the piece without considering my work's philosophical implications but I'd like to think it makes most people step back and look at books in a new way after seeing my work.

I'd like to open a conversation to think about the book's current role in media culture, its history and its future. Everything is turning digital and information is more accessible than ever yet its more formless and fragile at the same time. We are at a pivotal point in our history and the way we are recording it. Its frightening and exciting at the same time. 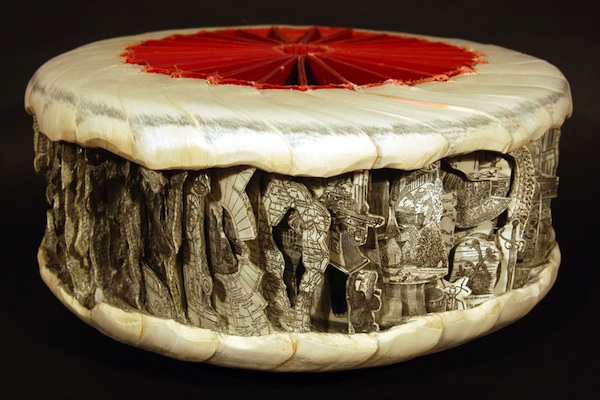 Who are some other contemporary artists do you think are breaking new ground?
I'm always amazed by Tim Hawkinson. Tom Friedman's earlier work really made me think about the possibilities of everyday materials. Buzz Spector was one of the first artists I ever saw work with books as a material. 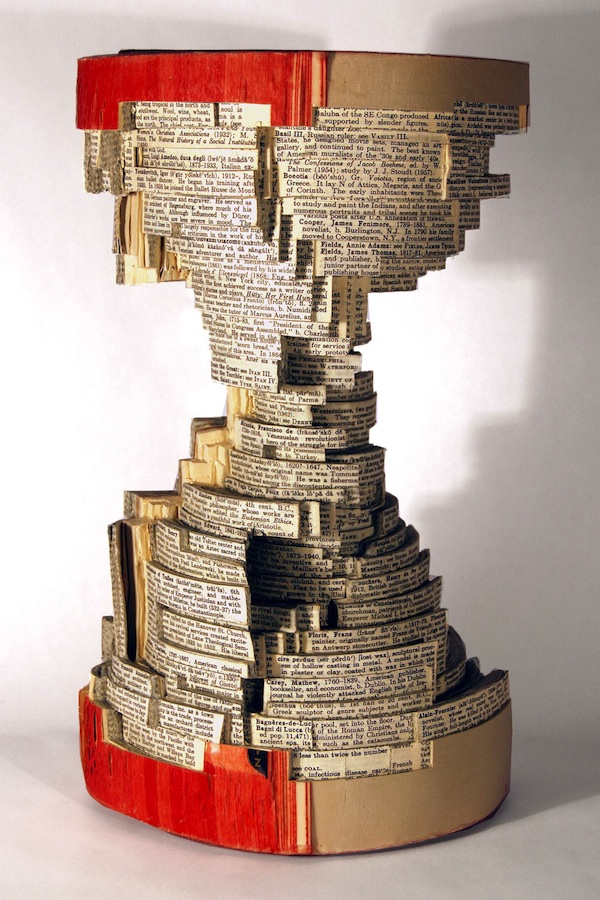 How has the internet and/or social media helped you get the word out about your art?
The internet has been great because it has been self-perpetuating for my own work. After the work, I think the most important thing is to take good images and to allow others to grab them and let them spread. I don't twitter and I'm not on Facebook and I don't really have to promote myself at this point. It's a cliche but things really work from the bottom up now. I have been really fortunate with bloggers and other sites mentioning my work and that leads to magazines, newspapers and other press and more opportunities for my work to be exposed to an audience.

Thanks for the interview, Brian. We're truly fascinated.