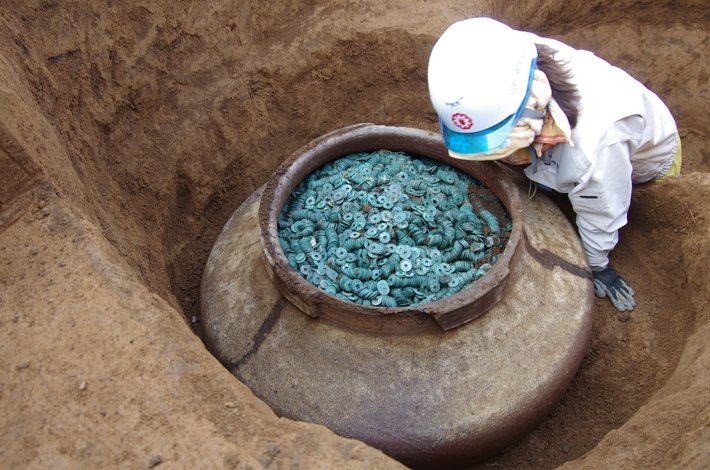 Archaeology is like a treasure hunt where the prizes are pieces of information from the past, and Japanese archaeologists recently hit the jackpot. They discovered a jar filled with coins belonging to a medieval samurai. The ceramic jar was found in the Saitama Prefecture north of Tokyo and is one of the largest hauls of medieval coins discovered in the country.

The jar, which dates back to the first half of the 15th century, contains well over 100,000 bronze coins and measures nearly 24 inches in diameter. A wood tablet was discovered next to the stone lid, with the words “nihyaku rokuju” (260) written in ink. Archaeologists believe this could refer to 260 kan, or units of 1,000, placing the total at 260,000 coins in the jar.

The treasure was buried 6.5 feet (2 meters) below ground and was likely placed there to save the samurai's riches, as it was a troubled period in Japan's history. Over the course of the 15th century, civil war broke out as the Muromachi shogunate was under attack. This was a period where the Emperor was relatively weak, with military dictators known as shoguns leading the country.

The second half of the 15th century saw different families jockeying for position and power—leading to increased violence. Feudal lords, known as daimyō, challenged the shogun's authority and it was in this era that ninjas were often hired and used as secret assassins. With that picture clear, it makes sense that a powerful samurai would want to keep his money hidden.

For now, 70 of the coins have been examined. These coins were looped on a string and include 19 different coins from China and different areas of Japan. It's thought that all of the coins—which have holes in the center—would have been strung together on a rope before being added to the jar. Based on the coins looked at so far, researchers believe the jar would have been buried at some point after the second half of the 15th century.

Archaeologists Undercover Ancient Military Barracks While Building Metro Station in Rome
Interested in the history of Japan? Share
Like My Modern Met on Facebook
Get Our Weekly Newsletter
Become a
My Modern Met Member
As a member, you'll join us in our effort to support the arts.
Become a Member
Explore member benefits
Interested in the history of Japan?