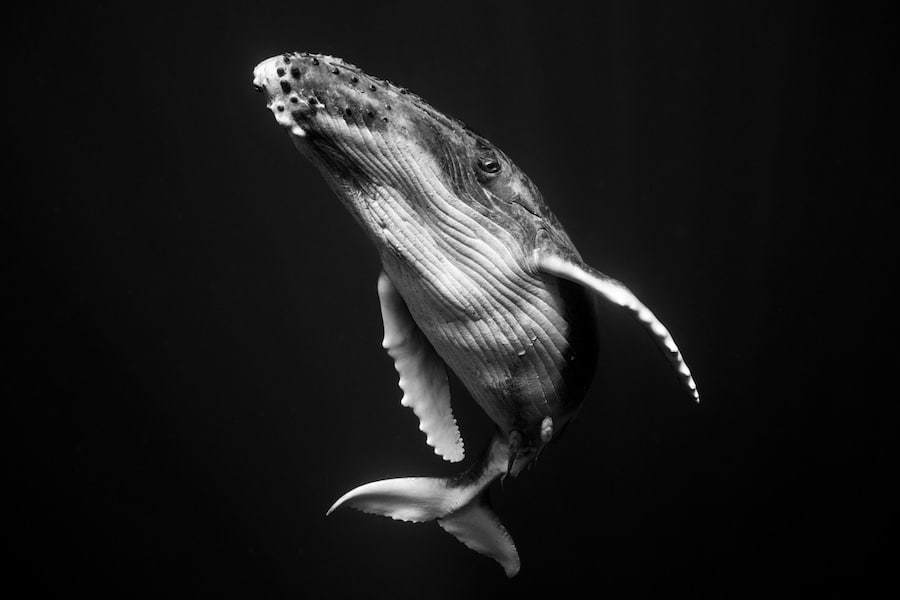 In Giants, a striking series of portraits, Australian photographer Jem Cresswell explores the awe-inspiring behaviors and undeniable anthropomorphism of the humpback whale. Captured over the course of 3 years in the southern Pacific Ocean, the series offers an intimate glimpse of the “gentle giants” as they complete their annual migration to Tonga.

Each photo shot by Cresswell—who fittingly describes himself as a visual artist—exhibits his artistic approach to underwater photography. Carefully selected from over 10,000 photographs, the photos that compose Giants are rendered in a stark black and white color palette and are compositionally creative. When paired with his astounding ability to capture the expressive emotion and individual personalities of his swimming subjects, these aesthetic sensibilities culminate in a collection of powerful portraits.

We recently had the opportunity to speak to Jem about Giants. To learn more about the inspiration, process, and intent behind the series, read our interview below. 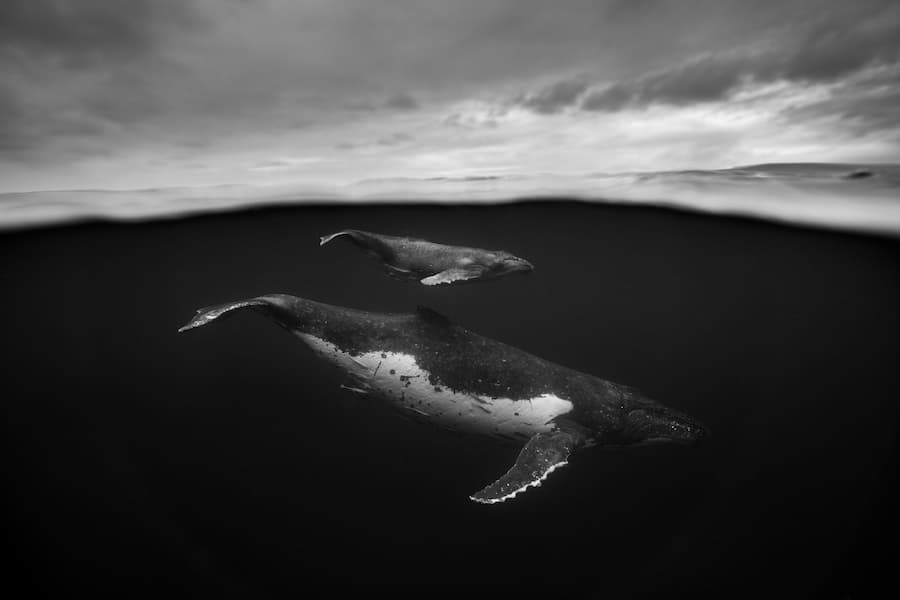 What inspired you to pursue underwater photography?

I have always had a camera in hand, for as long as I can remember. I grew up exploring the rugged desolate coastline of Yorke and Eyre Peninsula in South Australia, surfing and camping with friends. This sense of escape and freedom grew my love of the ocean. The first time I put on a mask and looked underwater, I remember being so scared, I couldn’t believe how big the world seemed under there; it was quite intimidating. That feeling grew into a sense of intrigue and awe of life below the surface. I bought my first underwater camera when I was 17, 15 years on the drive is stronger than ever. There is so much to learn and be discovered about the creatures that exist below. This fuels my desire to see more, create more images and share the experience.

In your series, Giants, you capture intimate photographs of humpback whales. What first prompted you to study these creatures?

I've always been interested in wildlife, particularly how we we as humans react to wildlife and the reasons why we are drawn to certain particular species. I have always been fascinated with humpback whales, due to their gentle nature, sheer size, and the feeling of insignificance in their presence. Every year numerous whales travel past the east coast of Australia (where I now live) on migration to the warmer breeding grounds of the pacific. Humpback whales migrate approximately 5000km on average, which is one of the longest migratory journeys of any mammal on earth. 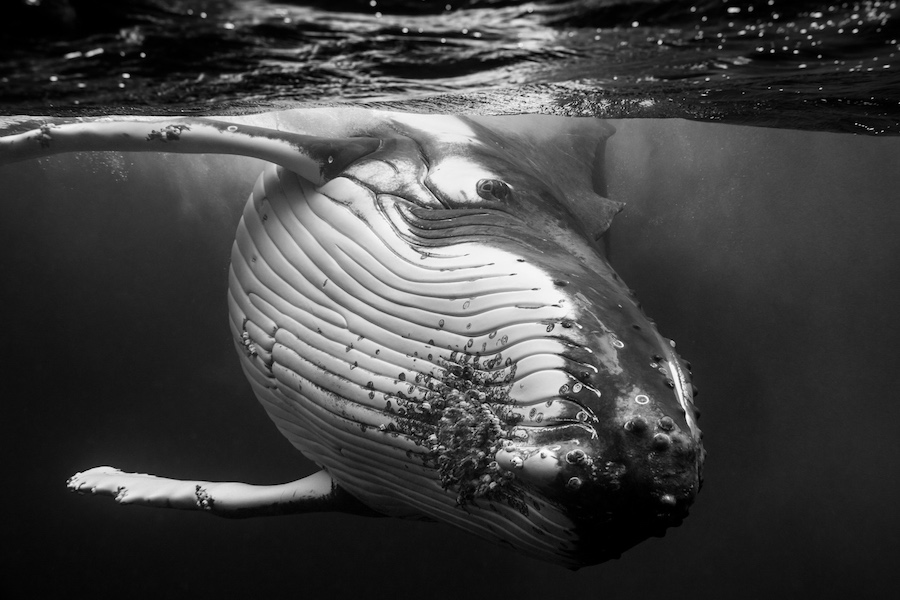 Can you describe the process behind capturing these underwater portraits?

When I'm in Tonga, I stay in a little apartment, above a local families house in Vava’u. Each morning we leave from the dock in front of their property at around 7:30am and head out through the channel, around the islands to find the whales and observe them from a distance. The boat I use has an incredible licensed Tongan Guide and Captain, Sione, who has been swimming with humpback whales for many years. Sione makes all the decisions as to whether we enter the water or not, and has a in-depth knowledge on the behaviour of the whales. I have learnt so much from him; his knowledge has ensured encounters far beyond what I thought I would witness.

We only swim with certain whales; snorkelling/free diving with them (no scuba). I always enter the water as calmly as possible, keeping my heart rate low and wait to see the behaviour. There are obvious signs if the whales are comfortable, and we will not approach until it is evident they are happy for us to be in the water with them. Humpback whales interact with many different marine creatures over their lifetime. Many a time, a curious whale will come over for a closer look. Its amazing to witness their conscious movements; to see their eye follow you as they move and put their pectoral fin down, to ensure they don't bump you as they pass. A lot of whales can be very interactive, particularly confident calves and sub-adults, and some even imitate certain movements. Encounters may last from a few minutes, to a few hours. Depending on how the day goes and what the weather is like, we stay out till the late afternoon, before heading back to port to wash the gear down, cook dinner and review images. Sunday is the only day we don’t head out, which is a strict Sabbath, enshrined into the constitution. I hope the short behind the scenes video (below) will give more insight to the process. 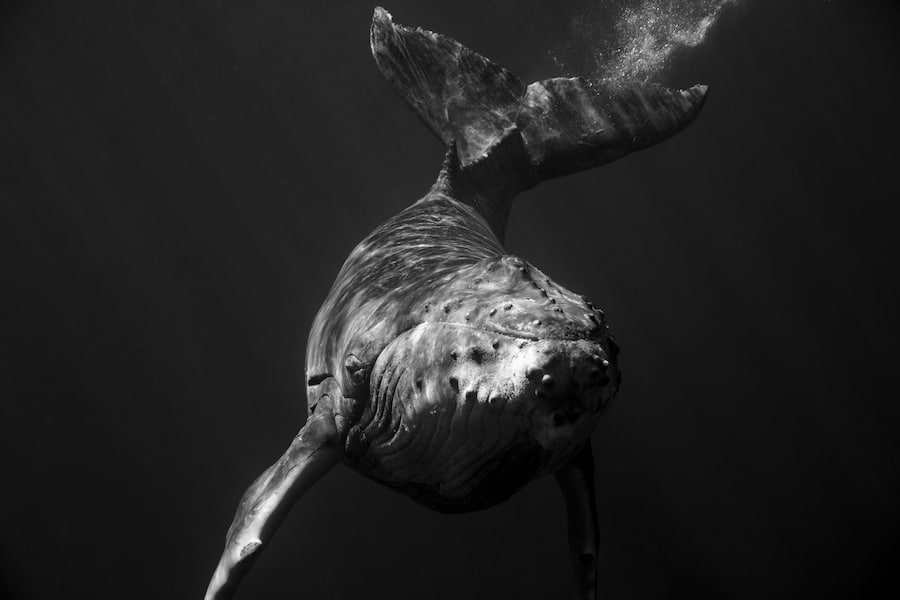 The stunning series is rendered in black and white. What influenced this aesthetic decision?

I wanted to avoid distraction as much as possible and encourage viewers' focus to be drawn directly to the subject. Black and white also has a sense of timelessness to it, which I feel also represents how long these creatures have been around for.

Prior to 2014—the year you first followed the whales’ migration to Tonga—did you have any experience photographing animals?

I had taken some images of manta rays and sharks whilst diving in Tahiti years earlier, but no specific body of work on a wildlife subject. I think it helped, not coming from a wildlife photography background, to go through trial and error to translate the ideas I had in my head into images.

Are there any other species you’d like to document?

There are a range of other species I'd also love to work with, to which I'm currently working on another major project and I intend to revisit my work on the whales again in the future. 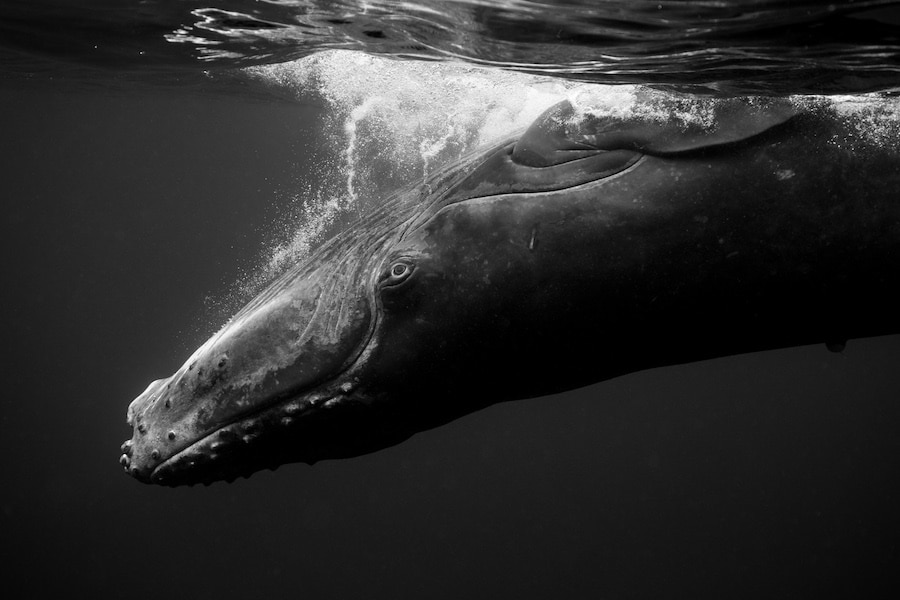 You’ve explained that, in 2006, scientists discovered that spindle cells are present in the brains of humpback whales. These cells, which are linked to “social organization, empathy, intuition and rapid gut reactions,” give the whales a sort of human-like persona. Has knowledge of this discovery influenced the way you photograph them?

The scientific report definitely influenced the way I photographed them. I find it so interesting how these cells, which are found in humans and great apes, can also be also found in humpback whales, at three times the amount of that in humans. Whilst their function in humans is known, there isn’t enough research yet to determine that they do the same in humpback whales. It is obvious though, that humpback whales exhibit complex emotional behaviors, have intricate social networks and complex song structures (which evolve between all the males that migrate to the same area). The discovery asks a lot of questions about anthropomorphism, given as how we, as humans, tend to put human emotions on what we think the behaviors of these creatures may mean.

How has your perception of whales (or even animals in general) changed since you began the project?

Working on this project I had many overwhelming experiences. This has taught me a greater appreciation, awareness and importance for not only these gentle giants, but for all other life that is on this planet. 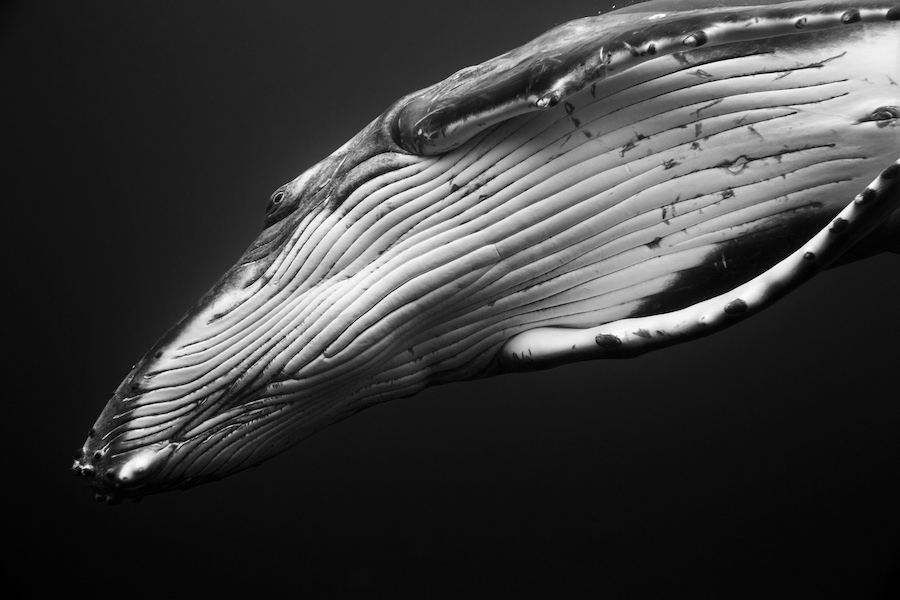 We love the series, and can’t wait to see more from you in the future. Do you plan to continue Giants? Do you have any other projects in the works?

I will definitely revisit ‘Giants’ at a later stage. I'm currently focused on a new body of work from Australia’s Great Barrier Reef. As run-off from farming and rising sea temperatures continue to bleach the coral and destroy the reef, the series looks at capturing a certain type of beauty found on the reef, before it is gone forever.

Lastly, the quality of your work is superb! What camera and equipment do you use?

Thank you, the series was shot on the 50mp Canon 5DSR camera, with the Canon 24-70mm 2.8 L and Canon 16-35mm f4 L lenses, in an Aquatech underwater camera housing. I chose to shoot the images on slightly longer lenses than what is typically used underwater, as I felt my tests on wide-angle lenses had much less of an “intimate” feel, and didn’t suit the traditional look of portraits lenses that I was hoping to achieve. 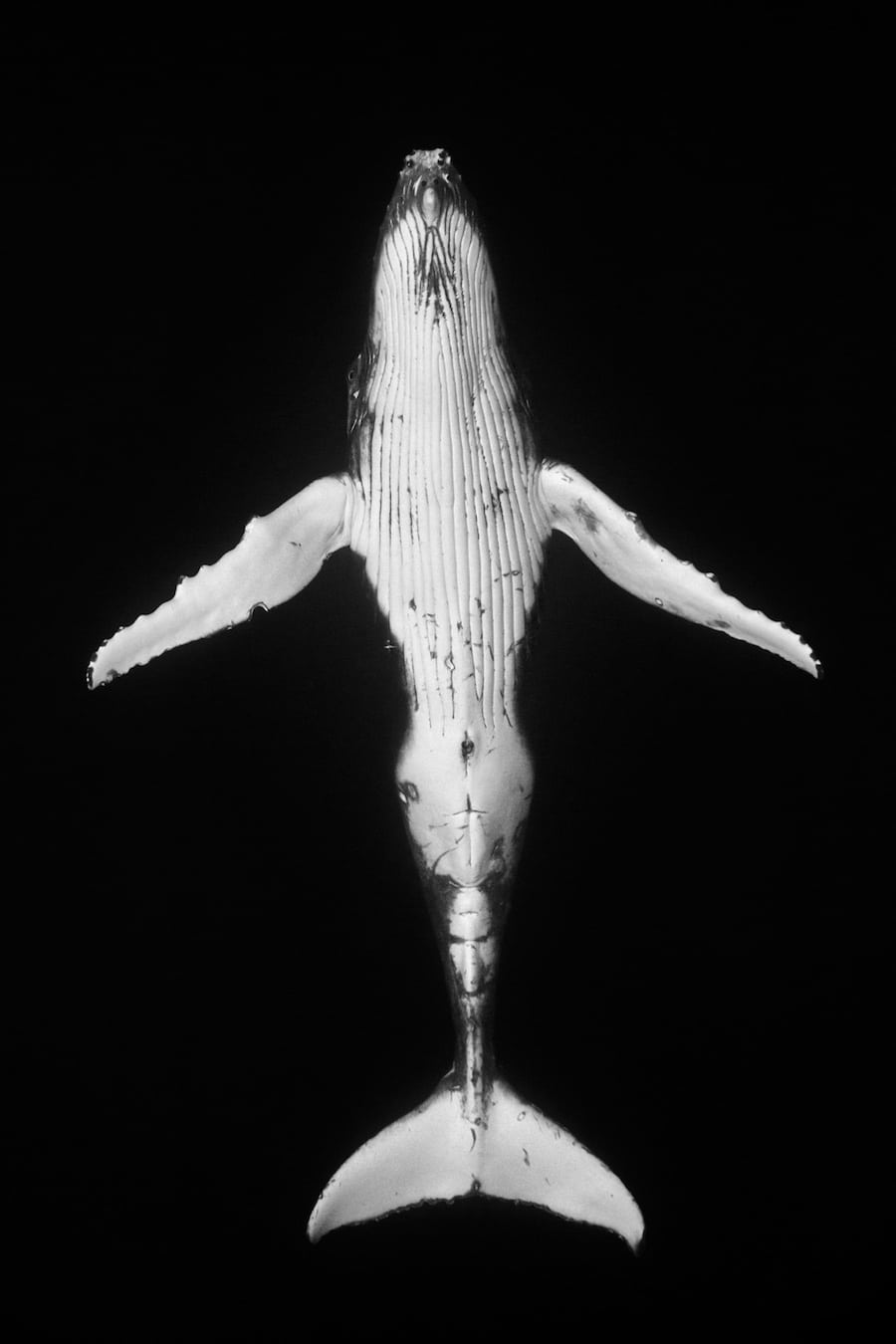 My Modern Met granted permission to use photos by Jem Cresswell.

Winning Images from the Underwater Photographer of the Year Contest