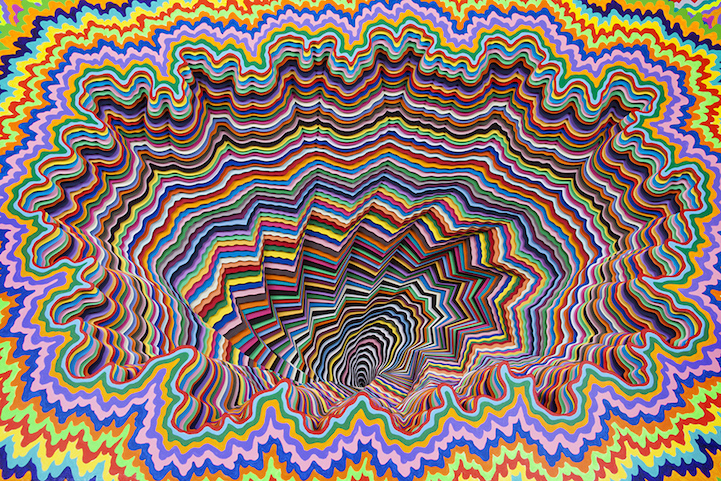 In 2007, Miami native Jen Stark made a vibrant splash in the art world with her fantastically psychedelic sculptures crafted from colorful layers of paper. Exploring ideas of replication and infinity, Stark’s mandala-like work mimics the intricate patterns and vivid hues found in nature, spiraling endlessly inward to a perfect point of meditation.

While the Los Angeles-based artist is most recognized for her hypnotic paper sculptures, last year marked a pivotal stage in her career, as Stark embarked on new projects that included high-profile commissions and collaborations with the likes of Facebook, Cosmopolitan, and Miley Cyrus. Breaking new ground while staying true to her trippy, rainbow-acid aesthetic and dizzying complexity, Stark proved that her creativity isn’t bound by medium or scale.

We had the chance to catch up with the artist and ask a few questions about her work, her monumental 2015, and her plans for the future. Scroll down to read that exclusive interview, lightly edited for clarity and length. 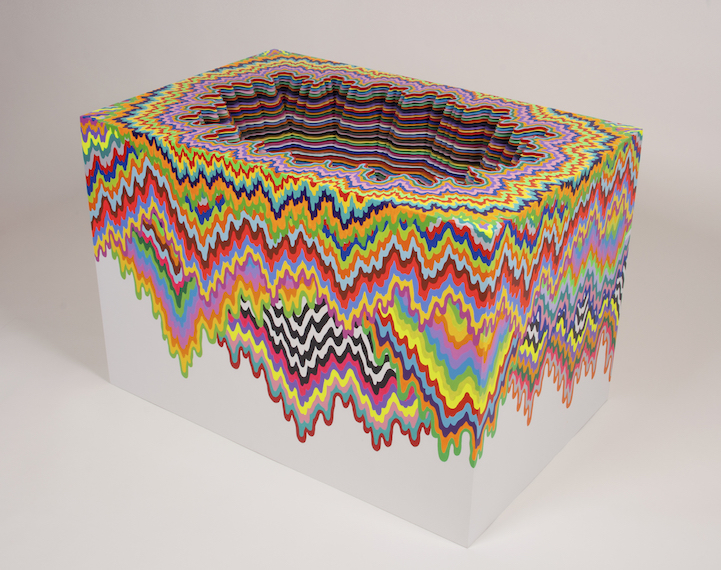 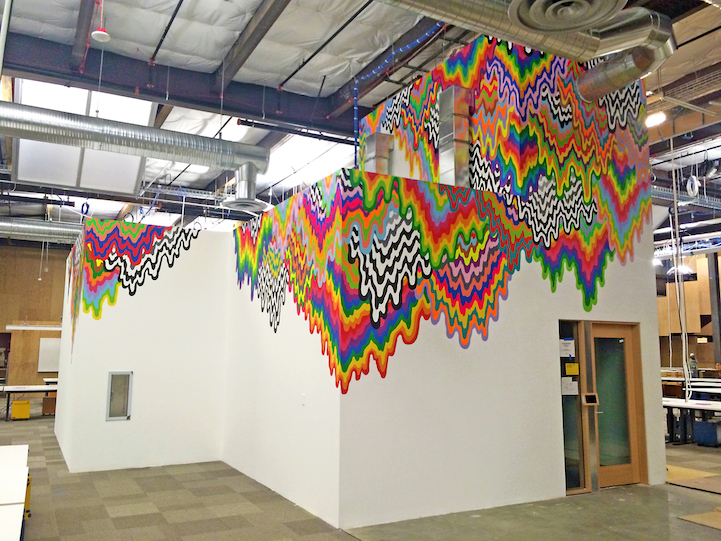 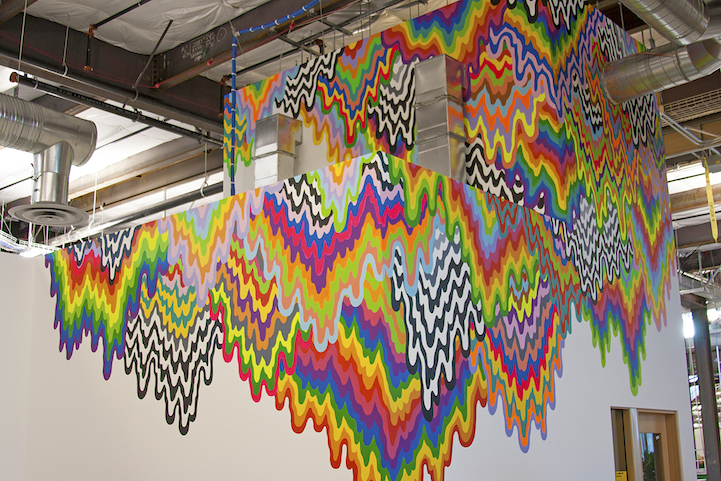 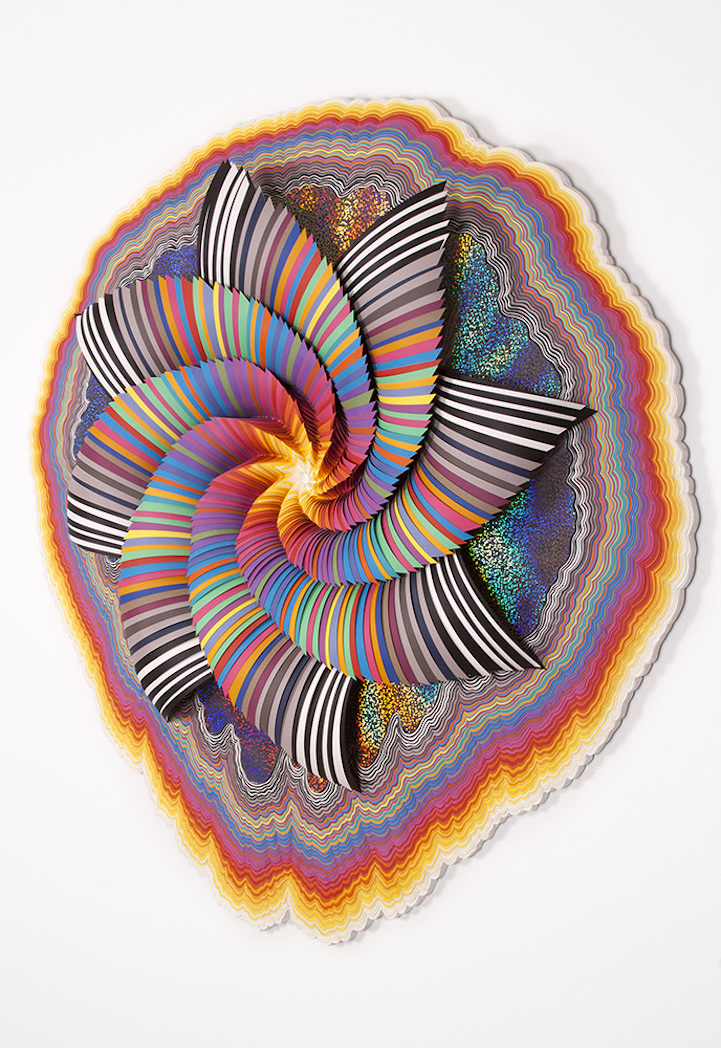 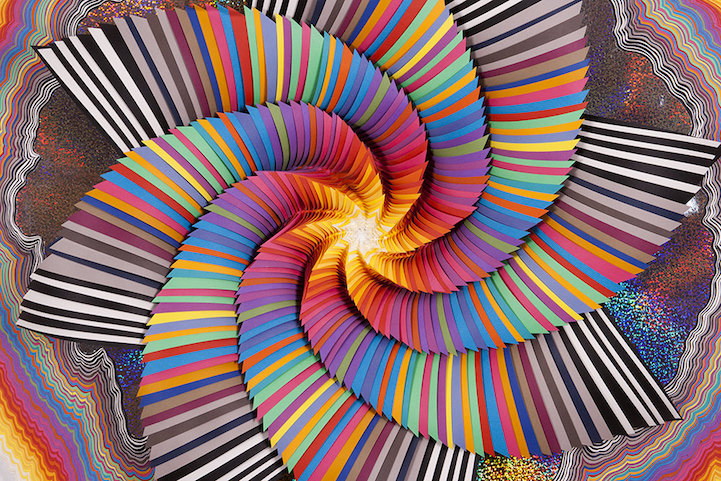 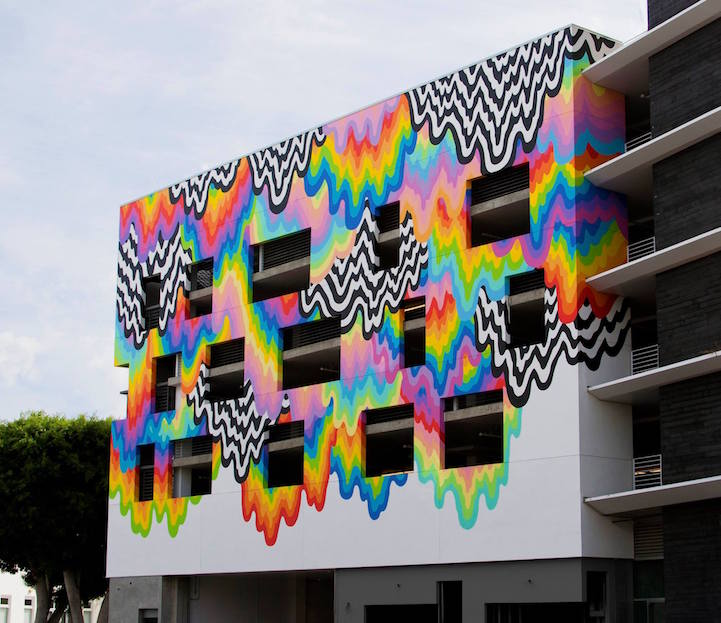 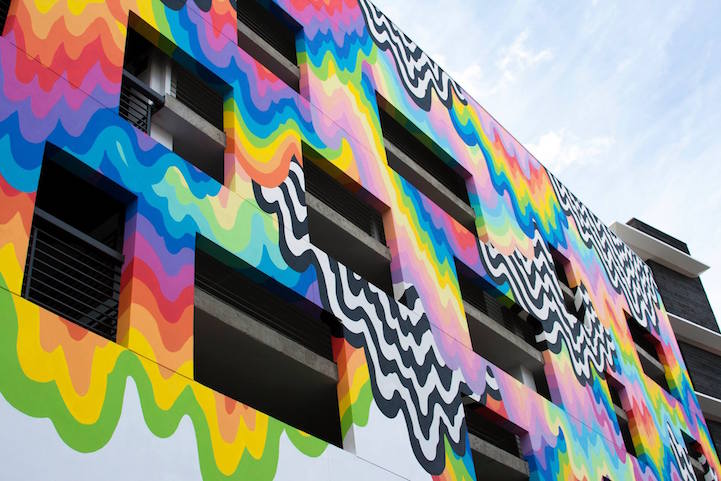 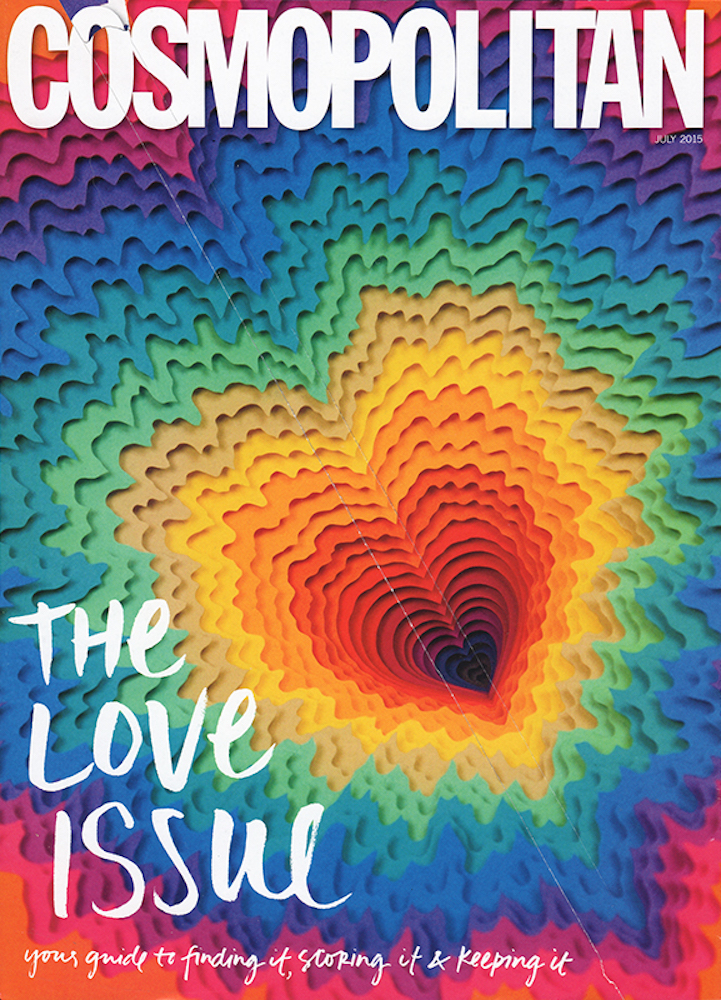 Tear-away artwork cover for the July 2015 issue of Cosmopolitan 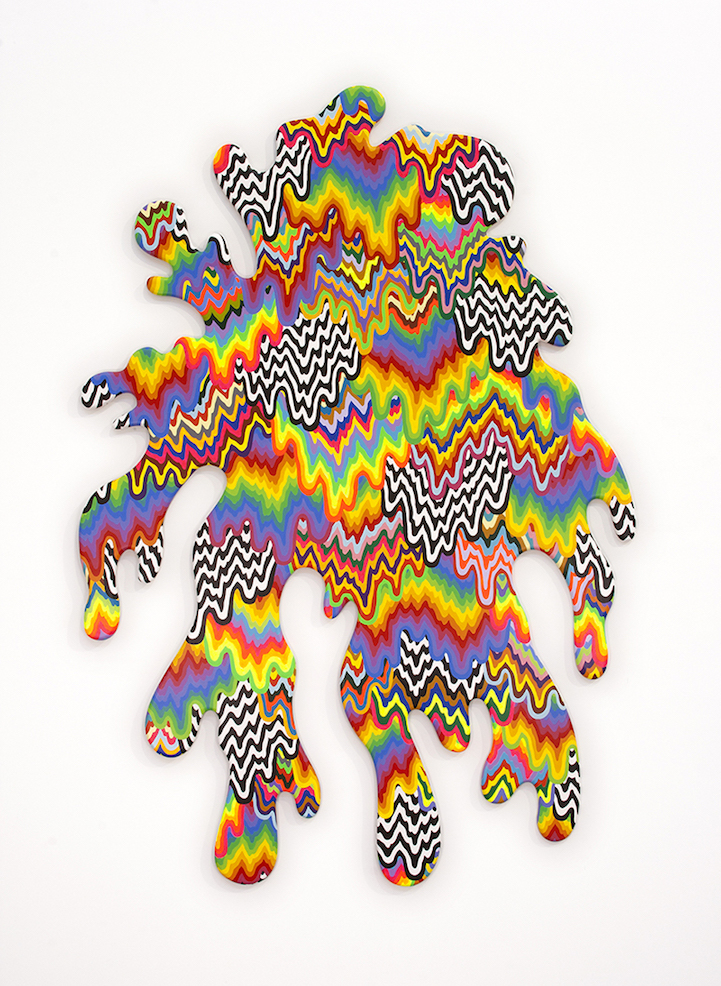 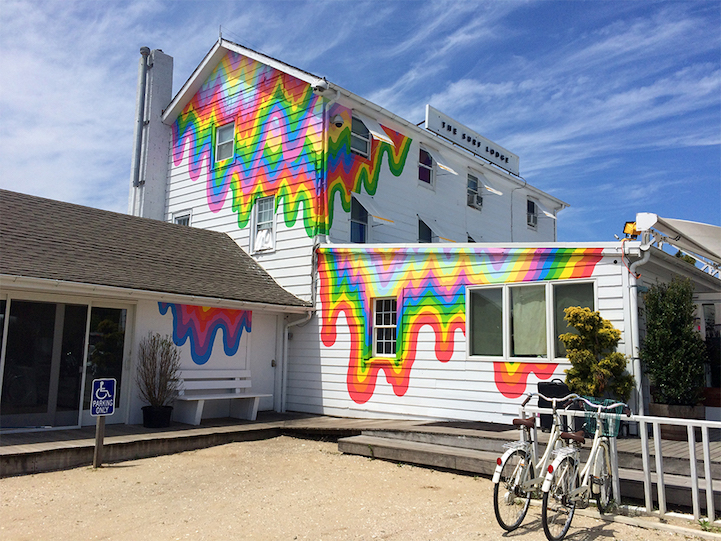 Mural on The Surf Lodge in Montauk, NY 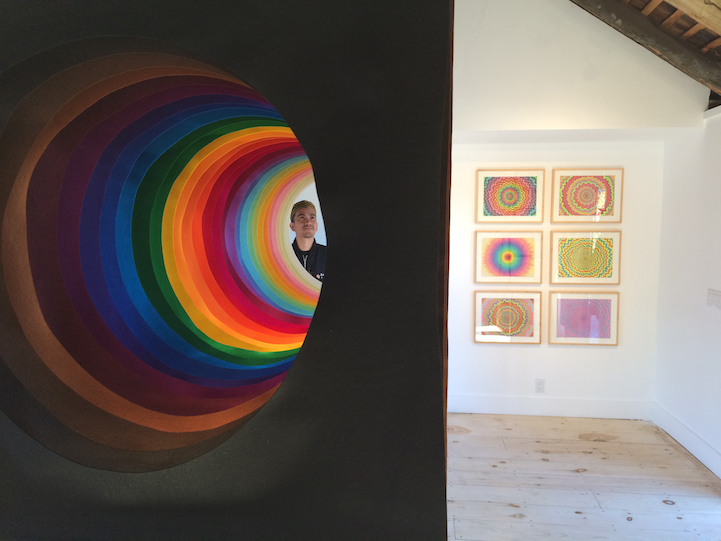 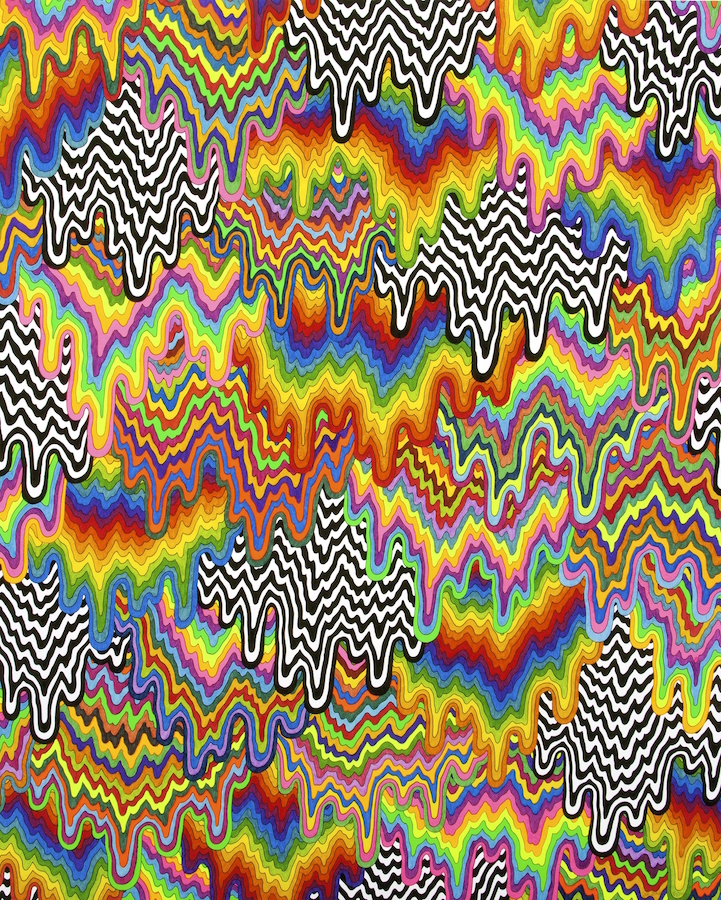 My Modern Met: How would you describe your artwork?

Jen Stark: I usually describe my artwork as organically mathematic, meditative, psychedelic sculptures, paintings, and animations. My sculptures are usually multi-layered and very intricate. Some of the forms mimic natural shapes in nature and ideas of evolution and topography.

MMM: When did you know this was the kind of work you wanted to pursue as both a passion and a career?

JS: I wanted to be an artist ever since I was small, and always aspired to it but never really knew it’d actually be possible. It was around 2007 when I realized I could actually make it happen. I saved up some money from a full-time job I had, and just took the leap into being a professional artist.

MMM: How do concepts and fields like science, math, nature, and psychedelia inform your work?

JS: I’ve always been fascinated with science and designs in nature and their significance. I love thinking about fractals, and mysterious things out in the universe, ideas of shamanism, altered states, and other dimensions. I love including these ideas within my work in the layers, evolution, and intricacy. Lately I’ve been delving into the world of meditation and consciousness and what is considered reality. I’ve been reading a book by Terence McKenna called Food of the Gods, which talks about how early humans may have evolved thanks to the help of psychedelic mushrooms and altered states from medicine plants. I’m so fascinated by all these ideas and the link between the psychedelic world, the afterlife, and how this all relates. For thousands of years our ancestors cultivated this amazing culture and psychedelic ceremonies and I think our culture (especially the west) has lost hold of these beautiful secrets and a deep connection to nature and how we’re all connected. There is a resurgence of this lately, and I hope people can get more in touch with these spiritual ideas and not have it be taboo to talk about it.

MMM: Last year seemed to be a pivotal year for you in terms of new audiences, mediums, and projects–for example, the Facebook mural, the Cosmopolitan cover, and Miley Cyrus’s MTV VMA’s artwork and animations, to name a few. Looking back, how would you describe your 2015?

JS: For me, 2015 was a year of change and growth. With my career, I think I’ve grown the most I ever have. It was a challenging year and I learned a lot. Working with Miley Cyrus and MTV for the VMA’s was the most surreal thing that has happened this year. To have my artwork in front of millions of viewers was incredible and a huge dream fulfilled.

MMM: Now will you be returning to more of the paper sculptures that you’re originally known for, or do you find yourself wanting to experiment more with new materials and ideas?

JS: Lately I’ve been experimenting more with other types of materials like metal, plastic, and animations/projections. I’ll probably always work with paper, but am open to expanding my ideas and challenging myself to try new things.

MMM: Any exciting projects or shows coming up that we should look forward to?

JS: I’ll be coming out with some clothing very soon, and will also be having a solo show in NYC at Eric Firestone Gallery in the fall.

My Modern Met granted permission to use images by Jen Stark.