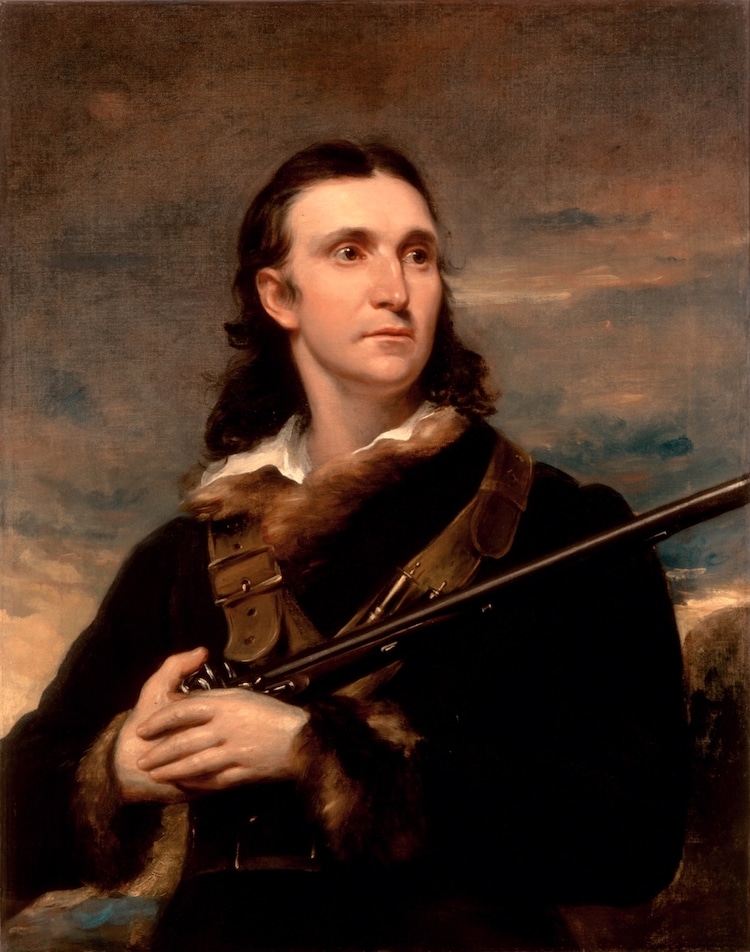 John James Audubon, 1826 by John Syme. (Photo: Public domain via Wikipedia)
This post may contain affiliate links. If you make a purchase, My Modern Met may earn an affiliate commission. Please read our disclosure for more info.

Birds have long been a source of fascination for artists, but perhaps no artist has had more of an influence on this world than John James Audubon. At the turn of the 19th century, French-born Audubon would make his way to America as an 18-year-old boy. He would then spend his life engrossed with his love of birds to create one of the most epic books of all time, The Birds of America.

Always an adventurer, Audubon was an entrepreneur who moved his young family out west to Kentucky, which was practically unsettled frontier at the time. After several failed businesses, he used his drawing skills to pay off his debts before dedicating himself to what would be his life’s work.

It took seven years to begin publishing The Birds of America and eleven years to complete the entire series. An ambitious undertaking, it was Audubon’s goal to paint every bird in North America. To do so took tenacity and sacrifice, but thanks to his efforts, we now have a time capsule of what American wildlife looked like in the 19th century.

Amazingly, Audubon didn’t begin his ambitious project until he was 35 years old and had to wait until he was 41 to see the first volume published. Each life-size volume includes hand-colored etchings of the birds Audubon encountered, including many species he discovered and several that are now extinct.

So what pushed John James Audubon to create this masterpiece? And how does his work continue to influence artists and ornithologists today? Let’s find out. 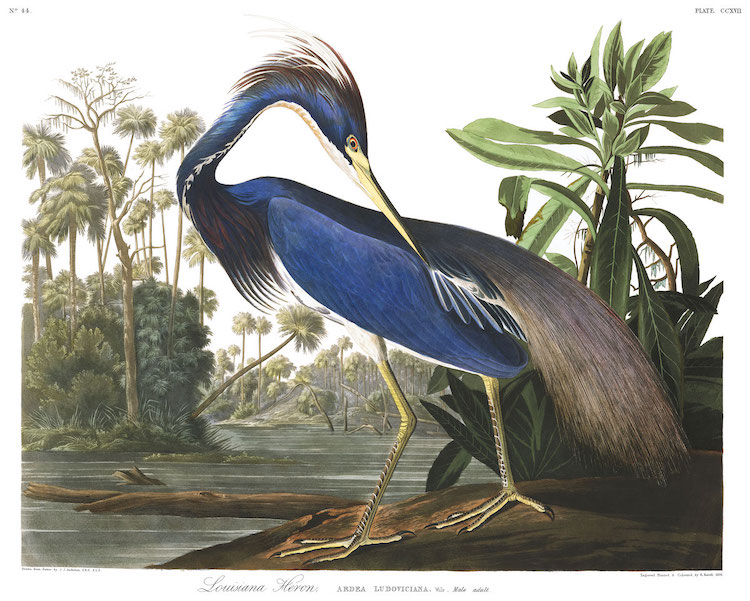 A passion for adventure

Audubon’s life is marked by incredible adventures, starting from when he came to America. His voyage was actually made using a false passport that his father procured in order to keep his son from being drafted during the Napoleonic Wars.

Once he arrived in America, he made his way to his family’s farm, Mill Grove, outside of Philadelphia. There, he was immersed in nature and had his first opportunity to take in the incredible bird species of North America.

His interest in wildlife led him to start illustrating and painting the birds he saw around them. But that’s not all; Audubon was also interested in their behavior. He recorded his observations as well as conducted the first known bird-banding project in North America by tying yarn to eastern phoebes in order to see if they returned to their nests each year.

The young Audubon, however, didn’t view his art as a business. Rather, he focused on imports/exports to support his young family. Still, he kept up his passion for birds in his spare time and became an expert in taxidermy and a collector of bird eggs, feathers, and other wildlife specimens.

Eventually, in 1808, Audubon would move his family to Kentucky where they would run a general store on the Ohio River. When that business went south, he moved his family further into the woods and they settled in a wood cabin in Henderson, Kentucky.

It was here that Audubon took on the guise of a frontiersman by wearing moccasins, frontier clothes, and carrying a tomahawk. Audubon enjoyed this flare and would later use it to attract patrons for The Birds of America. 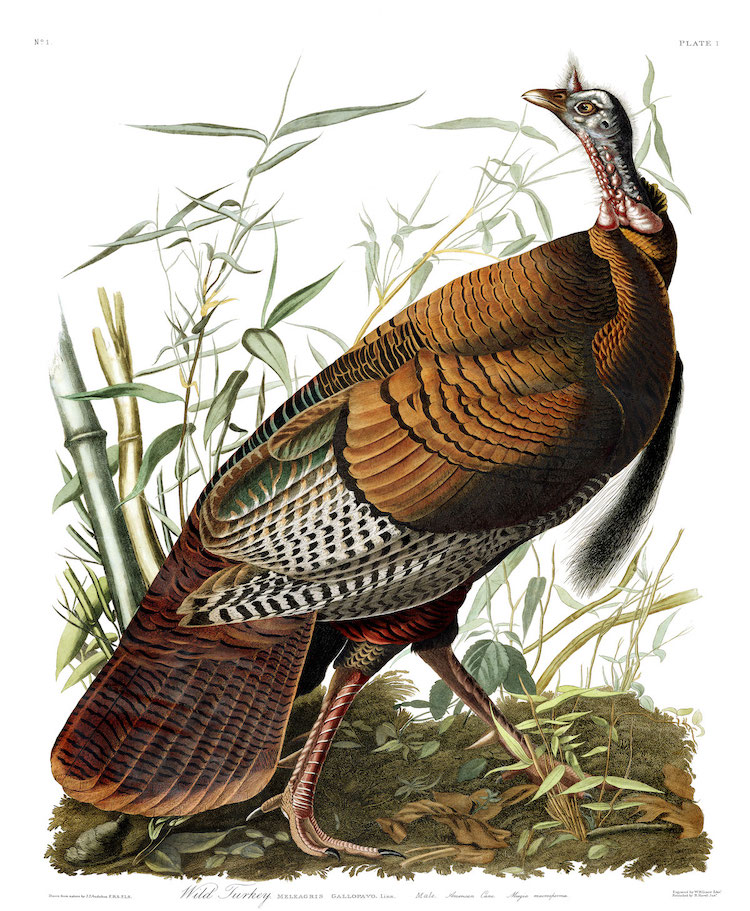 By 1819, Audubon was bankrupt after several failed business attempts. At 31 years old, he was thrown in jail for his debts. In order to make ends meet, he sketched portraits for people in the countryside, which wasn’t ideal but at least allowed him to further his art.

Shifting gears, Audubon began to combine his love for birds and art. This included a stint at what is now The Museum of Natural History at the Cincinnati Museum Center, where he painted scenery and did taxidermy for the museum’s exhibitions. It was shortly after, in 1820, that he became determined to paint every bird species in America.

To support his ambitious project, he gave drawing lessons and painted portraits for wealthy patrons. But mainly, as Audubon was fixated on his work, his wife Lucy became the main breadwinner for the family. She supported her husband's endeavors, which often called for him to be away for months at a time as he searched for new specimens.

The enormity of the work meant that the research and painting process would take years. In fact, Audubon’s work improved so much during the project that he had to go back and redraw some of the earlier species in order for the work to be uniform. 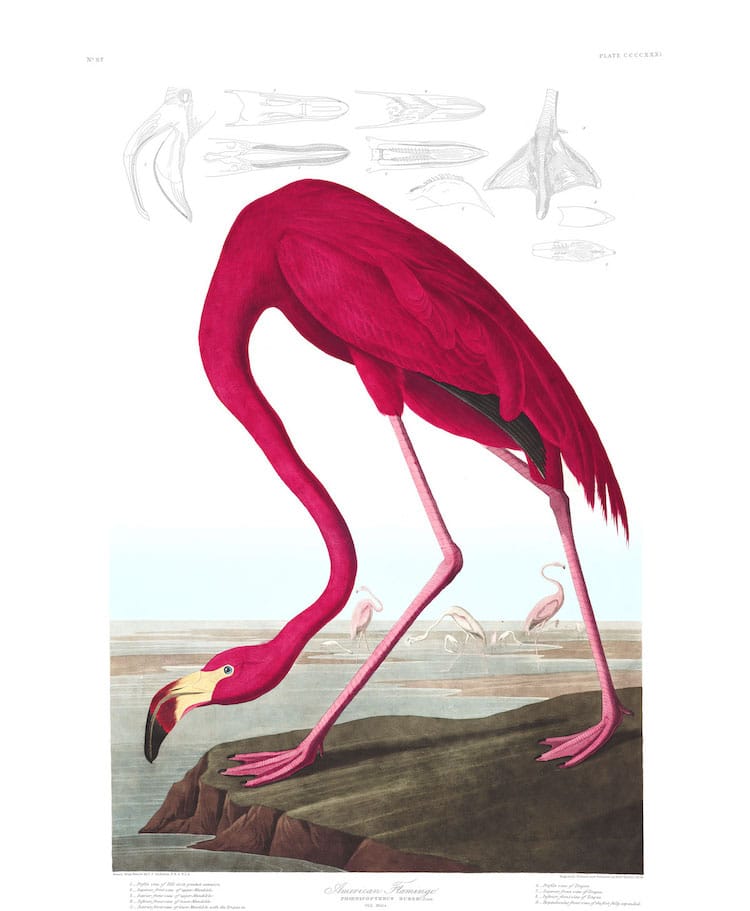 Six years after he started, Audubon boarded a ship for England with over 300 drawings. The now 41-year-old Audubon was determined to find financing for his work, which would be a costly undertaking given that each page was meant to be life-size and the number of birds was notable.

In a move that was ahead of its time, Audubon toured the UK and sold subscriptions for The Birds of America—a true 19th-century crowdfunding effort. The portfolio, coupled with Audubon’s panache for storytelling, sold the work and across the UK subscriptions were snapped up. This, coupled with exhibitions and oil commissions, allowed Audubon to raise the $115,640 (over $2,000,000 today) he needed to produce the book. Subscribers would receive five sets of prints every one to two months, with the publication lasting from 1827 to 1839.

Robert Havell, Jr. was responsible for the engravings, while over 50 colorists stood in an assembly line to hand-color each page. The pages themselves were enormous, so much so that they’re called elephant folio. 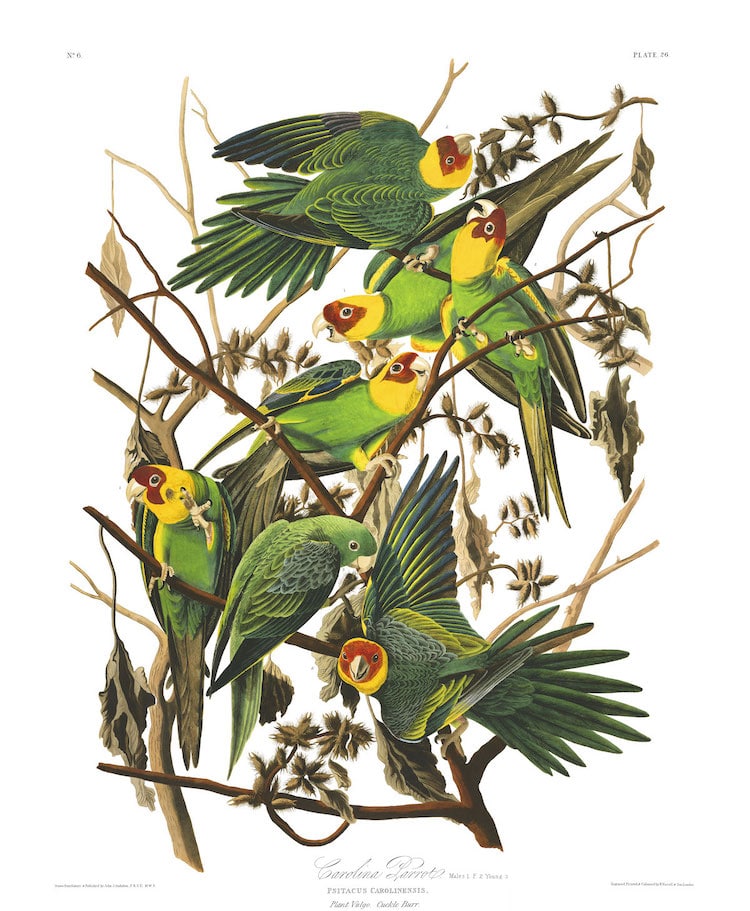 Importance of The Birds of America

Audubon’s bird drawings continue to resonate today. As opposed to prior bird illustrations, which were made after studying dead specimens, Audubon actually went out into the field and made direct observations. This allowed him to come back into the studio and pose the specimens in a more natural fashion using wires.

That translated into dramatic and dynamic views of wildlife, which had previously never been seen. The sheer magnitude of the work, which contains 435 life-size watercolors, is impressive even today. While fewer than 200 complete sets of prints were ever issued, those few that still remain today are incredible examples of artistry and scientific passion.

But Audubon’s contribution is not just artistic, it's also scientific. Not only did Audubon identify 25 new bird species during his research, but he also included birds that have now disappeared. Five species—the Carolina parakeet, passenger pigeon, Labrador duck, great auk, pinnated grouse—are now extinct and one, the Eskimo curlew, hasn’t had a confirmed sighting since 1963. Thanks to Audubon’s meticulous work, we forever have a view of American ornithology in the 19th century. 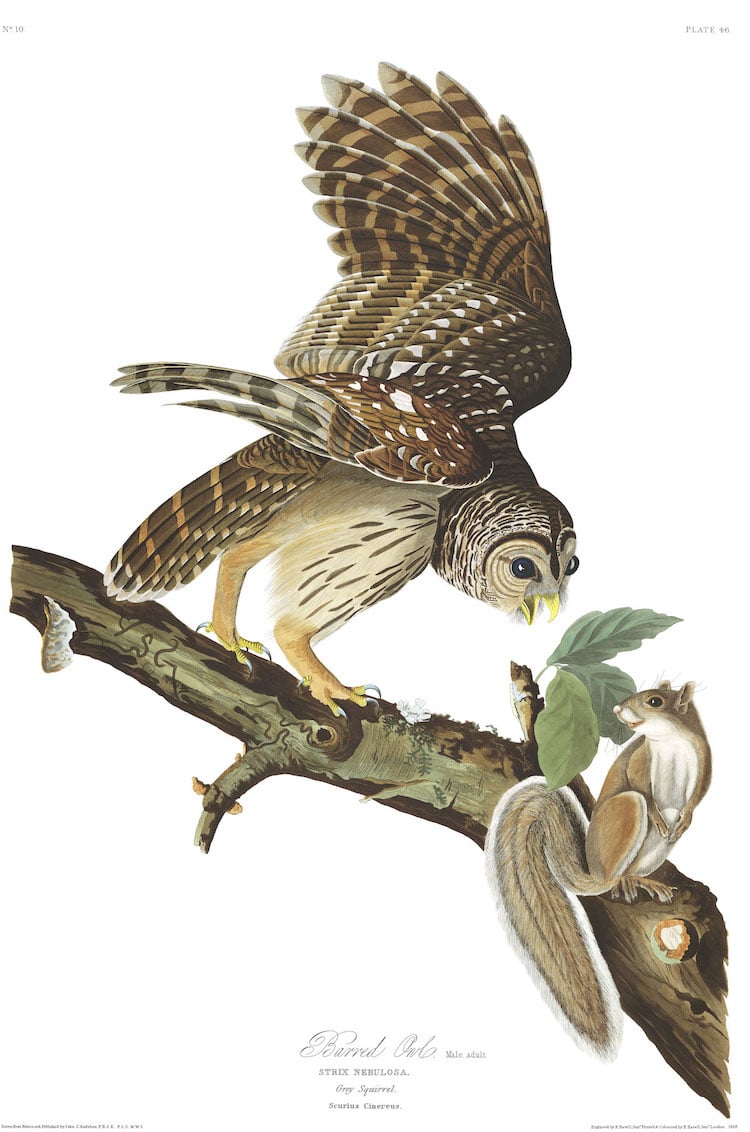 Today, only 120 complete sets of The Birds of America still exist. The work is considered one of the most expensive manuscripts of all time, consistently selling for at least $5 million—and upwards of $13 million—when up at auction.

If you’re looking to see The Birds of America in person, it’s still possible. The Academy of Natural Sciences at Drexel University in Philadelphia owns a full copy. The enormous elephant folios are on display and each day, at 3:15 pm, the staff turns one page from the book. You can also explore all of Audubon’s drawings thanks to high-resolutions scans made available by the National Audubon Society.