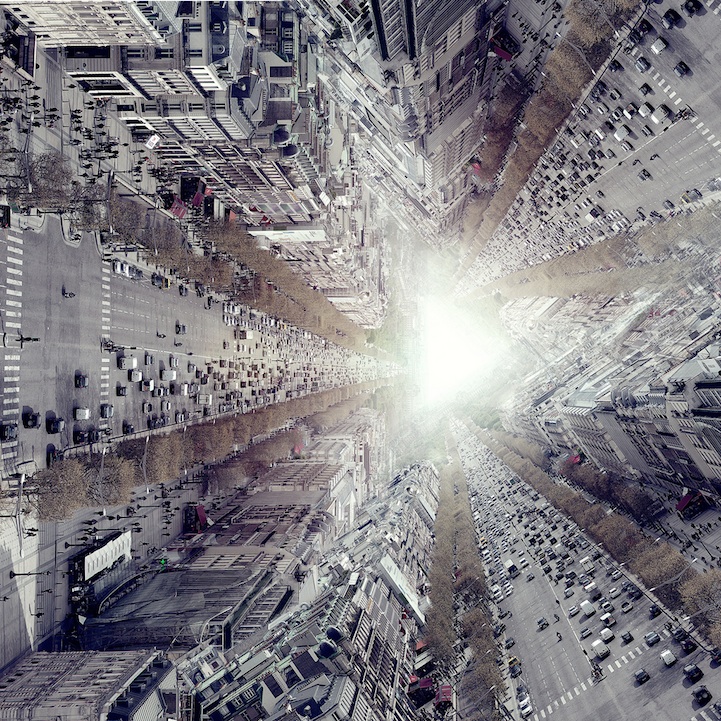 Is this not one of the trippiest photos of a city you've ever seen? Photographer and artist Simon Gardiner created From the Sky Down, taking inspiration from Japanese architect and photographer Kawahara Kazuhiko (otherwise known as Palla). He also used what he knows about the photography technique vortography to make this magnificent kaleidoscope city.

“Vortograph is the first completely abstract kind of photograph, it is composed of kaleidoscopic repetitions of forms achieved by photographing objects through a triangular arrangement of three mirrors. Alvin Langdon Coburn, a member of the Photo-Secession group and a pioneer in nonobjective photography, invented vortography in 1917 and remained the principal advocate and practitioner of the technique. So nothing is new!

“Like me Kawahara Kazuhiko uses architecture as a source of inspiration for his kaleidoscopic images but he has taken it to another level. He was producing this kind of work for a few years now, perhaps the movie Inception was inspired by his work? Well I do like his work, so had a go at using the triple image idea of the Vortograph fused with Kawahara Kazuhiko.”

Look through Gardiner's Flickr photostream and you'll notice some incredible architecture and city photos like this one he calls Ascending and Descending, Stairway to Heaven.

“I like shooting streets,” he says. “The streets are full of life with a story behind every street photo. The photographer captures the scene and the viewer discovers and interprets the story behind the shot.”