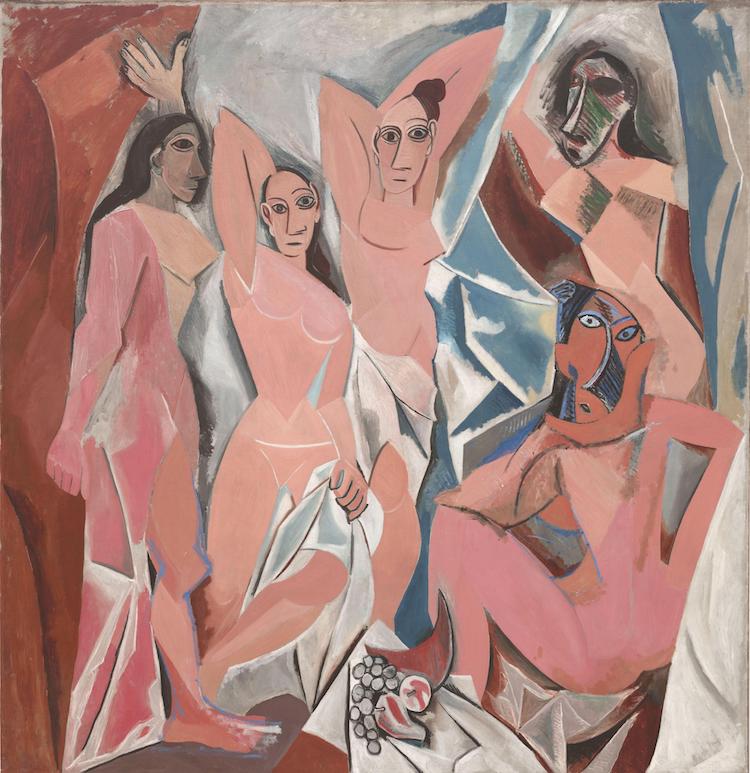 Pablo Picasso, “Les Demoiselles d'Avignon,” 1907 (Photo: MoMA via Wikimedia Commons Fair Use)
This post may contain affiliate links. If you make a purchase, My Modern Met may earn an affiliate commission. Please read our disclosure for more info.

Throughout the course of art history, certain works have come to define movements. The Mona Lisa, for example, is the face of the Italian Renaissance. The Starry Night symbolizes Post-Impressionism. And Les Demoiselles d'Avignon, a painting by modernist master Pablo Picasso, epitomizes Cubism.

Today, this Picasso painting has resonated as the artist's most prolific work of art—both in terms of his adventures in Cubism and beyond. Here, we present some interesting and important facts about this piece that illustrate why it holds such an important place in the canon of modern art.

The painting's original title was Le Bordel d'Avignon (The Brothel of Avignon).

Pablo Picasso completed Les Demoiselles d'Avignon in 1907. At the time, he was dividing his time between the Bohemian scenes in Paris and several locations in Spain, including Barcelona, where the painting is set. Specifically, it depicts five nude prostitutes from a brothel on Carrer d'Avinyó, or Avignon Street, in the city's Gothic quarter.

Picasso aptly called the painting Le Bordel d'Avignon (translated as The Brothel of Avignon). Its name was changed, however, during an exhibition organized by French art critic and writer André Salmon in 1916. For the show, Salmon referred to the painting by its present title in order to conceal its shocking subject matter from the public. Though this name-change clearly resonated, Picasso reportedly did not support it.

It required hundreds of preliminary sketches.

Six months prior to painting the piece, Picasso began producing hundreds of preparatory sketches. While the final painting is rendered in oil, many of these studies are completed in a range of mediums, including pencil and watercolor.

The studies for Les Demoiselles d'Avignon demonstrate the evolution of the concept and show the changes the artist made during the planning process. The most obvious of these alterations include the number of figures (some sketches include 7 figures, one of whom is a clothed male) and their positioning—though it appears that Picasso made the decision to include a crouching figure early on. 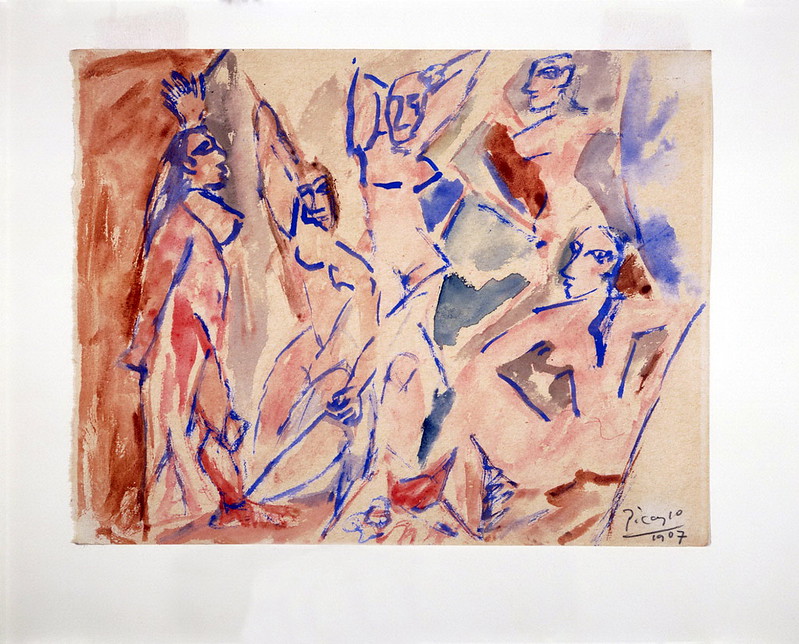 The figures are rendered in different styles.

While the figures appear aesthetically cohesive in early sketches, the final painting blends several different styles. The subject situated in the upper right corner, for example, is made up of angular, geometric forms and unusual shading; the crouching figure appears to simultaneously be portrayed from two different perspectives and has a mask-like face; and, finally, the three women on the left showcase stylized yet recognizable features more in line with Picasso's earlier work.

Why did the artist opt for so many different styles? While the reason is unclear, art historians hypothesize that Picasso was simply transitioning between styles and that this shift may have manifested in his work.

Picasso did not share it with the public for years.

While it was completed in the summer of 1907, Picasso kept Les Demoiselles d'Avignon—which is eight feet tall and just over seven feet wide—in his Montmartre studio until 1916. During this time, only a select number of people were invited to view the painting, including the artist's close circle of friends, consisting of fellow avant-garde artists and art dealers. Results were mixed.

“Most of Picasso's friends were bewildered and dismayed when, in 1907, they were allowed a glimpse of Les Demoiselles d'Avignon in his studio,” John Peter writes in Vladimir’s Carrot: Modern Drama and the Modern Imagination. “Even Braque was troubled and appalled: he told Picasso that looking at the painting felt like drinking petrol or eating old rope.”

Though shocked by the work, most of Picasso's friends remained supportive—except fellow artist Henri Matisse. For years, a rivalry had been building between the two, as each vied to be modern art's leading figure. “After the impact of Les Demoiselles d'Avignon, however,” critic Hilton Kramer explained in an essay, Reflections on Matisse, “Matisse was never again mistaken for an avant-garde incendiary.”

Fearing this eventual occurrence, Matisse was hugely critical of the painting, which he believed undermined and mocked modern art with its controversial subject matter and crude perspective. However, many art historians believe that Matisse appeared to emulate the painting the following year with Bathers with a Turtle. 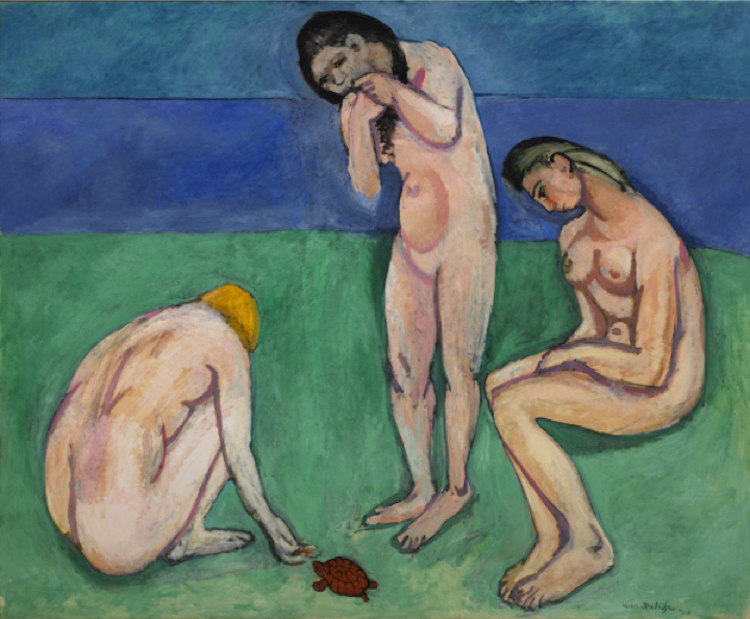