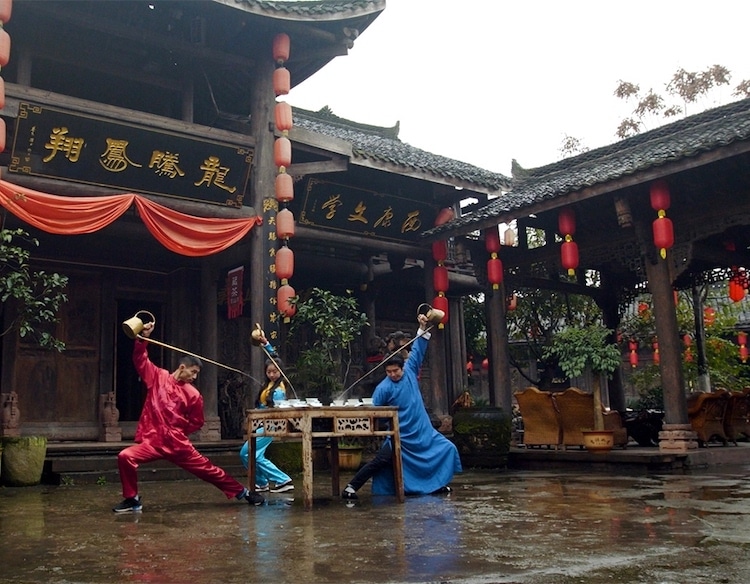 There is an art to tea. You might imagine this artistry as being expressed in the blend of the leaves or through the tools in which a cup of it is prepared, but in the Sichuan province of China, there is a performative aspect to enjoying the drink that fuses it with martial art moves. Called kung fu tea or long spout tea performance, it incorporates these movements into how the tea is poured. Performers twirl, throw, and spin the teapots as sequenced choreography, much to the delight of their audience.

The long spout teapot is an invention that's thousands of years old. It was introduced during the Three Kingdoms Period (220-280 CE) as a way to protect the warlord named Liu Bei as he enjoyed a cup of tea. His son, suspicious and worried that servants would try and assassinate his father, had Zhuge Liang develop a long-spouted pot so that Liu could be poured his tea from a safe distance.

The threat of death during tea is gone, and the long spout is instead used as a centerpiece for the enthralling ceremonies. To prepare for them, tea masters practice for years before they have their first successful performance. Liu Xumin, a long spout tea performer in Ya’an, said that he practiced seven to eight hours a day in order to perfect the required moves, pricking and scalding himself in the process.  “The performance I do is called ‘Mending Mountain 18 Forms of Drago-Flying Postures,’” he says. “It has 18 tea pouring postures.” As he moves, he thinks of the teapot as an extension of his body. “I hope to achieve the integration of teapot and human, of heaven and human, and of tea and human.”

Although the tradition of tea is very old, the moves of kung fu tea are relatively new. Zeng Xiao Long, a restaurant worker turned tea master, helped usher in the mesmerizing postures that have made long spout tea performances so popular today. In 1999, he participated in a contest which judged how gracefully tea masters performed the original kung fu tea moves—at the time, there was only one motion. Zeng, sans any sort of martial art or dance training, developed his own movements based on tai chi and kung fu that he had seen on television as well as in-person performances. He took second place in that competition and the tradition was never the same. Zeng then gathered with a small group of performers to develop new tea-pouring movements and the style grew from there.

The Sichuan province, particularly Chengdu, is the place to be to catch a showing of kung fu tea. But, it’s not alone. With the popularity of long spout performances, locales around the world have employed these tea masters to artfully pour cups of tea.