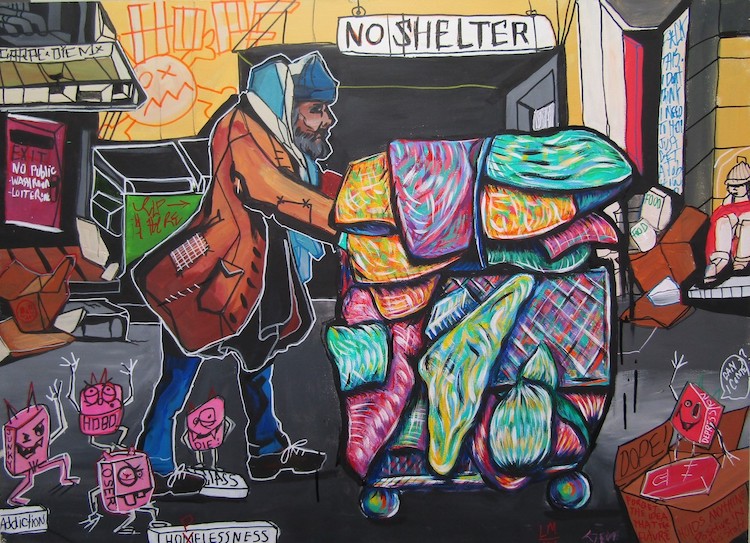 For Lucas Joel Macauley, art has been a refuge. His life took a turn after seeing a successful career as a tattoo artist and shop owner come crashing down due to addiction. Macauley found himself living on the streets for several years after losing his most important relationships and all of his possessions. Through that entire time, his creativity was a ray of light that guided him, and now, for the past eight months, he's not only been artistically productive but, more importantly, sober.

Macauley's unfortunate foray into drugs began in 2011 when he was prescribed morphine after a motorcycle accident. Coupled with the pressures of his successful career and mental health issues that had gone unaddressed, they collided to create a toxic explosion.

“Your addiction kind of takes the driver’s seat and I hated that. I never wanted to be in that situation,” shares Macauley. “It slowly just took things away from you. I would lose a car or a nice place I had or a boat or whatever. It was the things I had built up with my success—everything got taken away. [Losing] relationships were the hardest. Eventually, you don’t have a place to live, you don’t have a car to sleep in. I remember selling a car for drugs one night and realizing—I don’t have a place to sleep.”

Macauley eventually got himself into rehab where he spent two and a half months in recovery. During that time, he painted over 100 pieces of art. Today he continues to paint and, with each canvas, unravels a new layer of what he's gone through. “My art is reflective of my own experiences completely,” he tells My Modern Met. “I am giving people that look at my art a direct look into my mind, my past my memories, and my pain. I have one goal with my art and that is to tell the truth.”

Each canvas is dotted with words and phrases that spell out the judgments that people experiencing homelessness face while trying to survive on the streets. These words cut deeply and it's impossible not to feel the weight of Macauley's pain when looking at each scene. Pouring himself into his work has become a sort of therapy for him, as he's able to unpack his experience without fear.

“My art has been therapeutic but so much more,” Macauley tells My Modern Met. “While painting, I sometimes breakdown—no words are spoken. I am alone with my memory and as it gets laid out on the canvas I am able to see how far I've come from sleeping on the street. Even during that time I would find paint in dumpsters by job sites and old drywall pieces of cardboard and paint in order to get something off my chest. When I was homeless and in addiction I felt a loneliness that consumed my entire being. The canvas became my friend, my psychologist,  and my priest, in some cases, to absolve me of my sins when there was no one else.”

Macauley continues to paint, often with his brother, and sell his work. He hopes that people will appreciate his art and use it to learn to love themselves. He also hopes that it will force people to question their own attitudes about those suffering from addiction and living on the streets. “Why are we letting our brothers and sisters, our mothers, fathers, friends, and every other person that becomes afflicted with homelessness or the disease of addiction, mental health, or despair fall? Why do we turn our heads and down our eyes to avoid such an obvious problem? Where is the love? My story is just one of many.”

Artist Lucas Joel Macauley was immersed in a cycle of addiction and homelessness.

Now he has pulled himself out of that dark place and uses his art to tell recount his experiences. 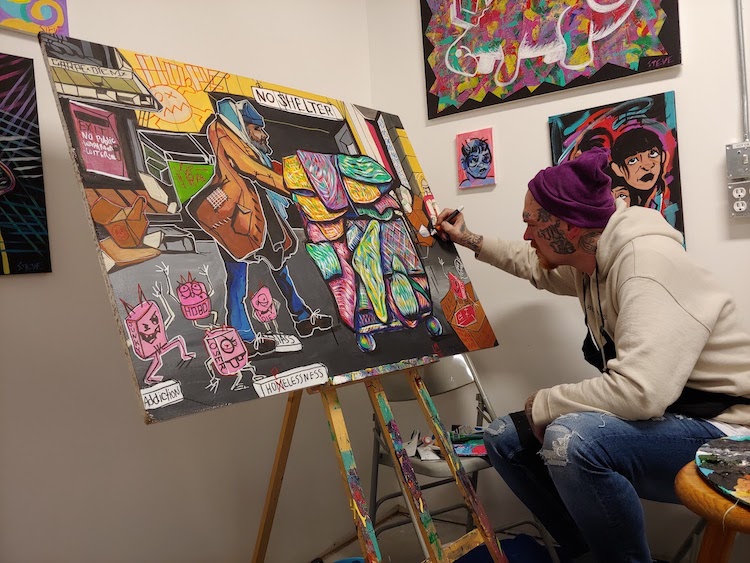 Artist Changes the Lives of the Homeless by Painting Their Portraits

Inspired by his story?