Interview: Artist Changes the Lives of the Homeless by Painting Their Portraits 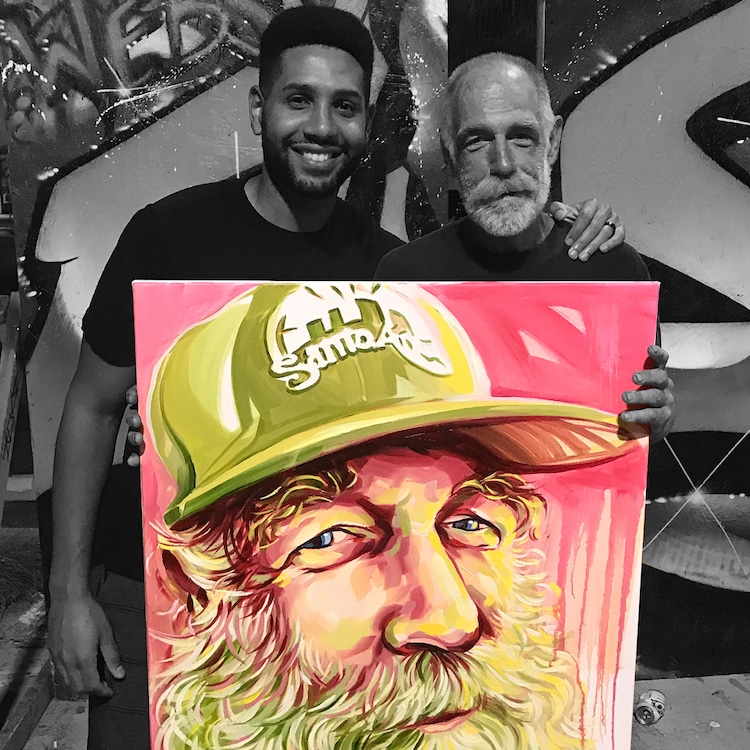 Nearly three years ago, artist and automotive designer Brian Peterson began a project that has since taken on a life of its own. Called Faces of Santa Ana (FOSA), Peterson started with art-making and human kindness as his platform; upon moving to Santa Ana, California in 2015, he noticed that there was a large homeless population. “Something inside me was telling me to reach out to them,” he told My Modern Met at that time. As a devout Christian, he was moved to “take action and befriend” those who were experiencing homelessness.

To honor the stories of folks he met, Peterson began creating paintings of homeless people—amplifying the voices of those who are often disregarded by passersby. Each subject completes Peterson's work by signing the bottom of the painting. “I believe their stories and testimony are just as integral to the success of the piece as my paint and brushstrokes,” Peterson said. You can read their touching accounts through FOSA; proceeds from the sales of works going towards meeting the needs of his newfound friends.

Faces of Santa Ana has only gained momentum from the last time we spoke to Peterson; he now has 27 portraits under his belt, and FOSA is an official nonprofit organization. It involves the community—including high school students—and has resulted in an incredible mural and short documentary about the amazing work started by Peterson.

We were privileged to catch up with Peterson about FOSA. Read more in our exclusive interview, below.

Learn about how Brian Peterson began creating paintings of homeless people and how his incredible project has taken off through Faces of Santa Ana. 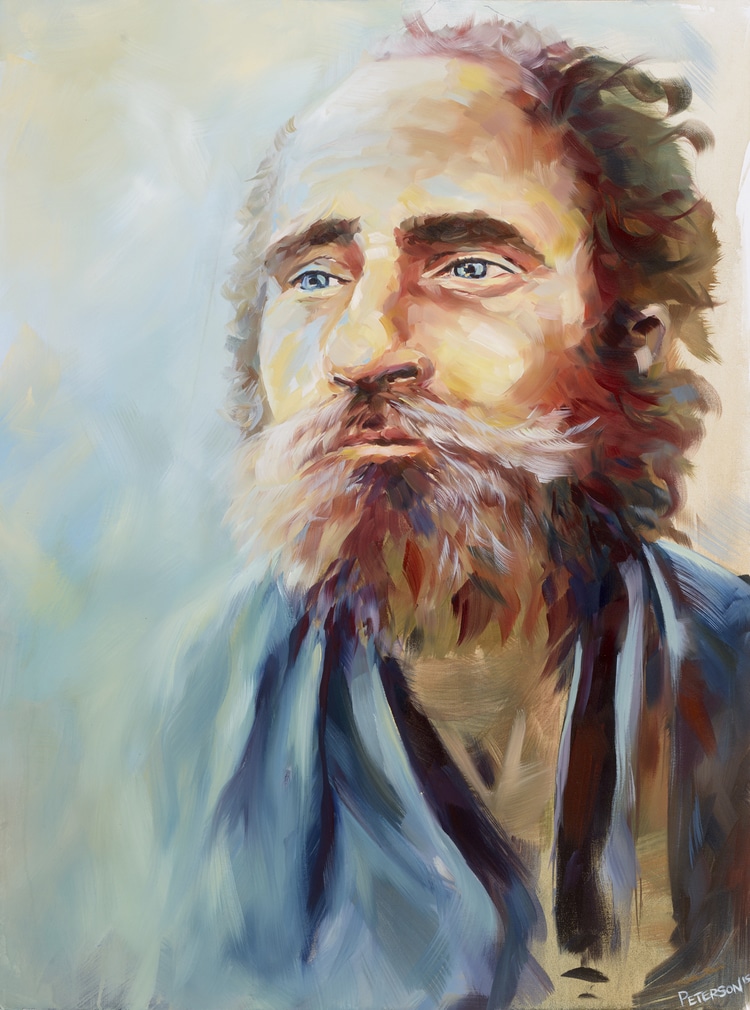 Matt, “I’d love some studio time so I can write a song”

How has Faces of Santa Ana changed since we last spoke to you?

Since we last spoke, the heart behind Faces of Santa Ana has remained the same, however, the project has increased in both structure and impact. We have since become a non-profit 501c3 which has allowed greater support from our community financially. Our team dreams of seeing movements like Faces of Santa Ana in cities around the globe. We believe in activating artists of all kinds into using their gift for cultural change.

I have now painted 27 portraits and met some amazing people living on our streets in Santa Ana. My neighbors have shaped my mind and heart in amazing ways, resulting in healthier relationships all across areas of my personal life. Faces of Santa Ana has also taught an art class for high school students, and 27 young adults painted portraits of their neighbors experiencing homelessness as well. We saw an incredible breakthrough in the hearts of the teenaged artists as they painted their clients and learned to see people with new color and eyes of love. 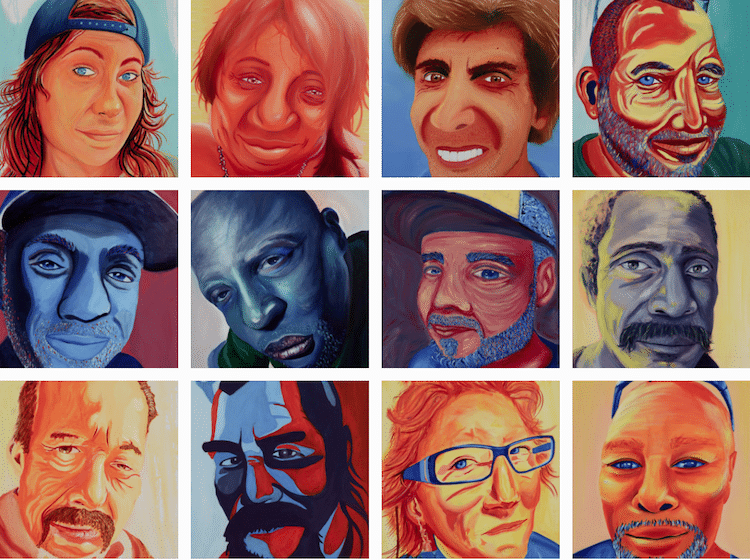 (continued) Shortly after My Modern Met's article of FOSA, we were approached to film a short documentary about the project. Filmmakers from Retina Cam productions created a fantastic piece capturing the exchange of love between the paintings and our friends experiencing homelessness. This 13-minute documentary has now shown in film festivals around the United States and picked up many awards along the way. Napa Valley, Vail, and Santa Cruz Film Festival are a few of the locations we've impacted with our message of creativity and love. 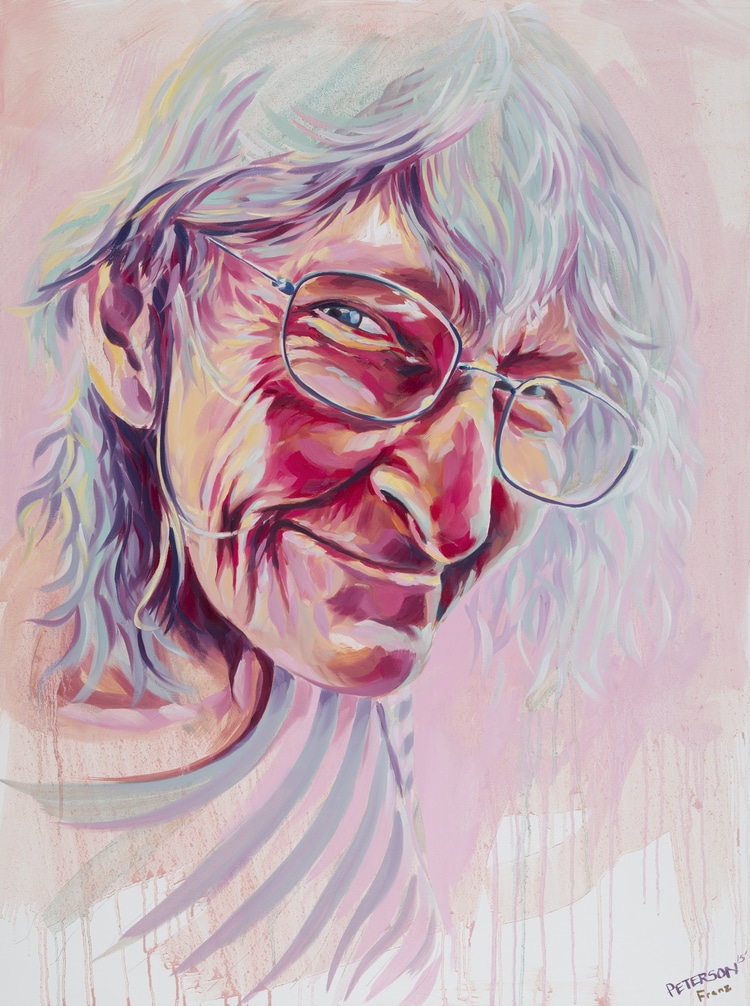 Cindy, “Being a homeless woman is especially hard”

What would you say is one of the most extraordinary experiences you've had with this project?

One of the most impactful experiences I've had with FOSA seems small on the surface, but really shaped my thinking and heart for the project. It started with the completion of Cindy's portrait. As it was revealed, she wasn't thrilled with the fact that I painted her with blue hair. The tough love she normally showed me intensified with her response to the painting. She uttered, “Well, either way, nobody is ever going to buy a portrait of this old lady!”

Her comments didn't hurt my wife and me, but instead, we left believing that the sale of her painting would provide her with a new outlook on her self-worth and dignity. To our surprise, an hour later, her portrait sold to a client that reached out and said she reminds him of his own grandmother. Together my wife and I returned to Cindy to tell her the great news. As we did, her face turned bright red (just like how she's depicted in the painting), and we saw something shift inside her. Something was broken off. Self-hatred and negative thoughts about herself no longer had a home in her spirit.

Fast forwarding about a year from this experience, Cindy has now found a permanent home to live in and receives a monthly social security check to sustain her. Still today, she carries a small size print of her painting everywhere she goes. She explained, “This painting is a moment of time where I began to HOPE again.” It was a powerful statement. Looking back, we did not have access to housing, services, etc, but we imparted a level of hope in Cindy that became the catalyst for the internal change in her heart, eventually leading to an external breakthrough. This experience showed us the power of the intersection of creativity and love. 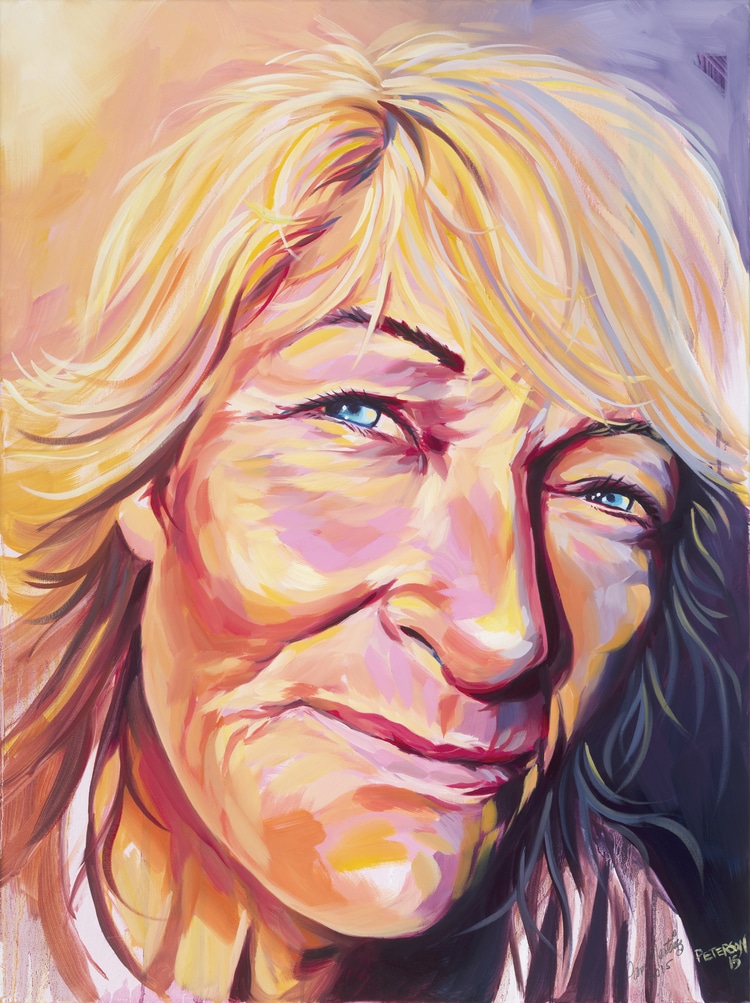 Pam, “God saved my life by sending me to jail”

Who is one of the most memorable subjects you've painted? What's their story?

Every subject is memorable, and we find their stories are all so unique. One person who continues to have our hearts is Pam. Her story really highlights the roller coaster life can be for us. Pam grew up and made a successful life for herself, often having seasons of owning multiple businesses including a thriving dog grooming business. She was also one of the first women in history on the Colorado Ski Patrol.

Somewhere amidst the success, Pam and her husband fell victim to the abuse of heroin and she landed in jail on possession charges. While in jail, Pam's husband passed away from an overdose. Pam feels if she were a free woman, the addiction would have gotten the best of her as well. She tells a story of a moment she recalls vividly when everything changed. While sitting in her cell with an appeal for her case in one hand, and a bag of heroin in the other, Pam realized she needed to make a life choice. In one hand she held freedom, and in the other, addiction and maybe death. At this moment the sunset flooded her room with light and she lost control of her nerves and began vomiting. She proceeded to flush the heroin and recounts the moment as a time where God showed up to help her make the most important decision of her life. She ran toward the appeal for her case and was soon released from prison. Pam began weeping at the reveal of her portrait, claiming the colors and contrast both remind her vividly of the experience within her prison cell when everything changed in her heart.

Since then, Pam has received permanent supportive housing at The Orchard, a place where we completed a large mural. Pam has been our first recipient of a project we call HomeBless where we overhaul and redecorate the homes of the formerly homeless. Pam's rollercoaster life journey has finally settled. The ups and downs, coupled with years on Santa Ana's streets, have become a smooth ride, one where she now enjoys the journey with a grateful heart. Pam's life and friendship have both inspired us, and opened our hearts to love other better. We are forever thankful for her friendship. 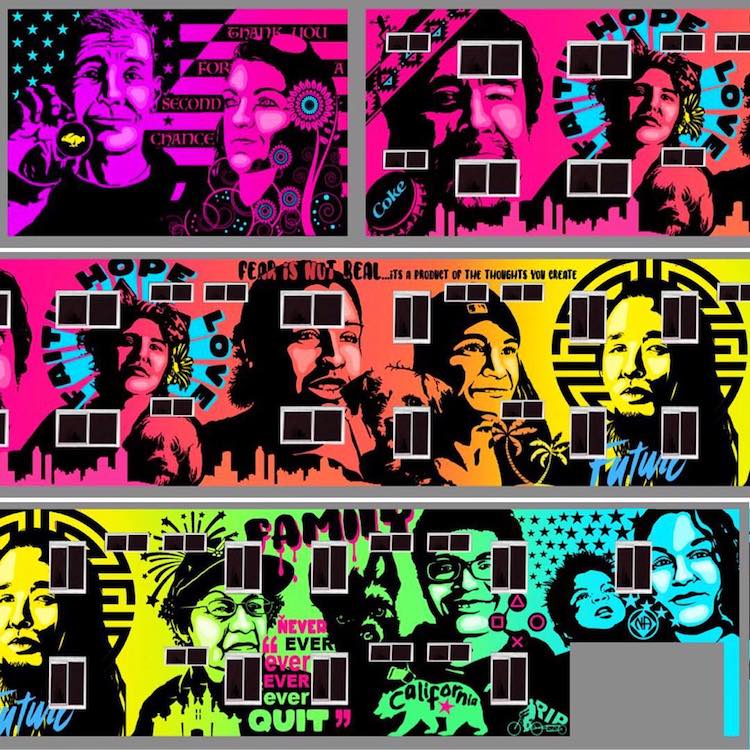 Mockup of the Orchard Mural

Can you tell us about The Orchard Mural? What was it like to paint 17-foot images? How did it affect the community in doing so?

The Orchard Mural was the most impactful project we've ever worked on. The 180ft long wall was done by my partner Damin Lujan and I, with help at times from our wives Vanessa and Michele, and Amusement Park Ad Agency's volunteer staff. The Orchard is a 70 unit permanent housing facility for the homeless in Downtown Santa Ana. Community Development Partners purchased the hotel and renovated the building to be suitable as a permanent residence for the clients currently living there. We were asked to paint a mural and proposed the idea of continuing the heart behind Faces of Santa Ana and depicting their faces in large scale. CDP loved the proposal, and we began interviewing clients currently living in the homes onsite. We asked questions about their lives, families, happiest moments, saddest moments, hopes and dreams. These interactions became the inspiration for all the artwork. The colors, mood, symbols, and quotes are all a reflection of the dialogue we shared with clients that have felt invisible most of their lives. We set out to change that.

The installation of the wall took about eight working days. Damin and I shared many experiences with the clients as they watched us create a piece of art for them day in and day out. We found they have the most generous hearts, as food, drinks and thank you cards were commonly brought out to us. To our surprise, as the wall was beginning, we found some residents were against the mural in the new space they call home. Some shunned the idea of having a “graffiti piece” in their backyard. However, as the artwork came closer to completion, these very same people changed their minds and asked to have symbols or quotes from their own stories on the wall. I was our pleasure to accommodate their requests. We were grateful for the opportunity to continually love them through their opposition. In the end, love wins.

(continued)  With the completion of The Orchard Mural, the atmosphere is different in the community. We've noticed the residents call the project “Our Wall” and they've explained visitors come by regularly to photograph the large piece of art. The mural has connected them all in a special way, almost as if they're family. Daniel, a 14-year-old resident at The Orchard still feels special today when he walks out and sees his face dignified so large. It has changed the way he sees himself forever. 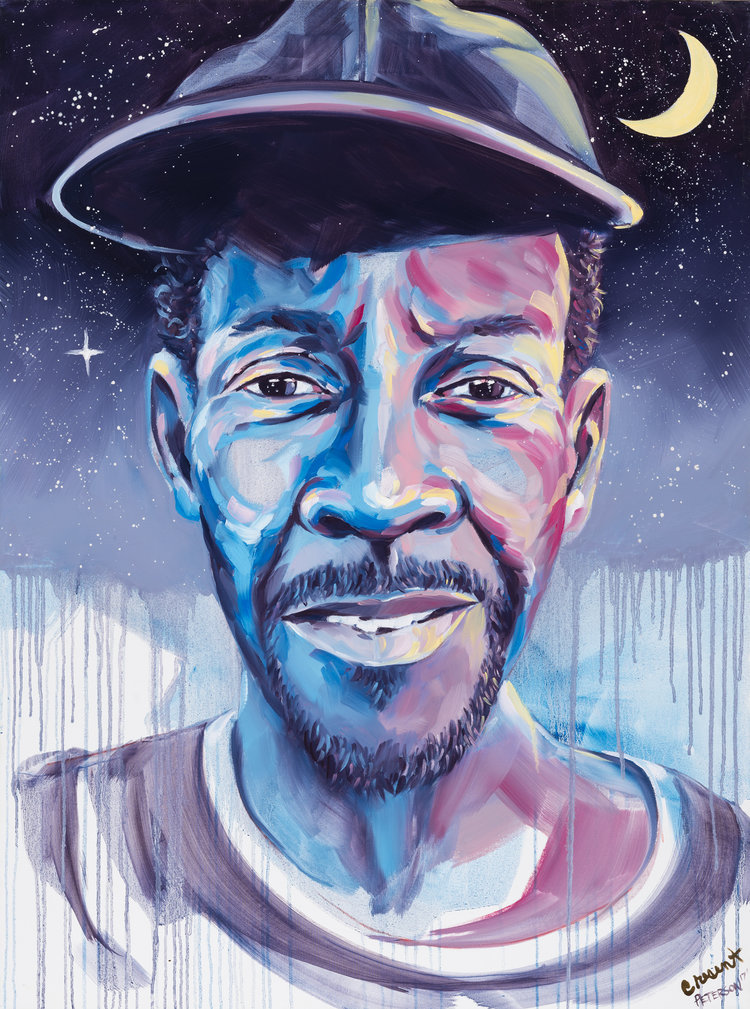 Crescent, “Look up in the sky, and you'll see a crescent moon, and that will be me smiling at you.”

How can people help from afar?

From afar, the most tangible ways to help are to support us financially in the form of buying a painting or donating to our 501c3. Purchasing a painting has a residual trickle down effect impacting more than our client, but also those following the project. It helps others see how they too can make a difference with their own gifts and talents when they pair them with love. We are also fundraising for future HomeBless projects where we will use our creativity to turn new houses for the homeless into homes they feel comfortable and safe in. Thank you in advance for your generosity.

My Modern Met granted permission to use photos by Brian Peterson.