Interview: Prolific Doodler Covers Everything in Sight with His Imaginative Drawings 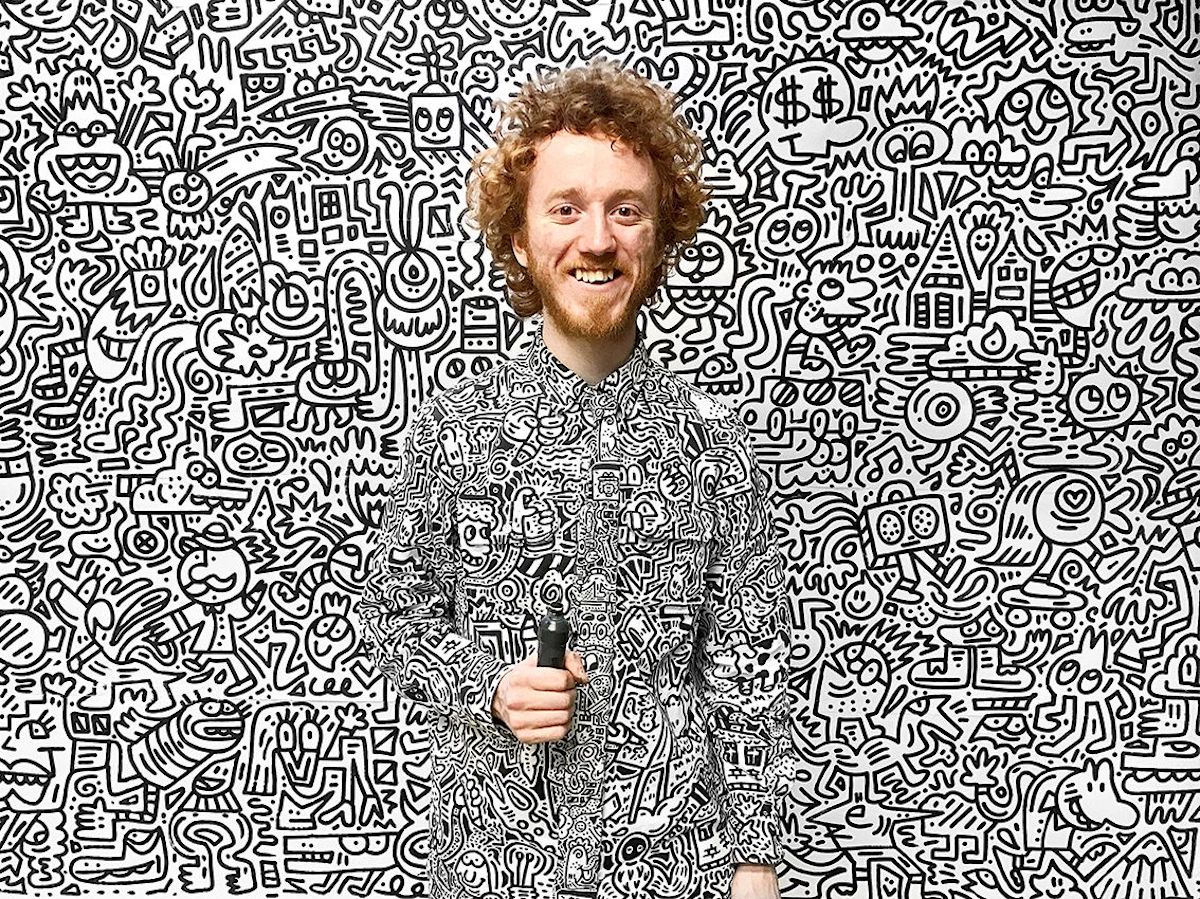 With the artistic identity of Mr. Doodle, you’d imagine that Sam Cox is prolific with a pen. But the man with the moniker is beyond prolific. He's a drawing machine who creates awe-inspiring artworks—and even entire worlds—with his series of clustered characters and shape-driven mark-making. The artworks are busy and mesmerizing, packed with symbols that you’re likely to get lost in as you marvel at their intricacies.

Cox has been scribbling since childhood. Now in his early twenties, he describes his long-held practice as “OCD,” aka “obsessive-compulsive drawing.” White space—whether it’s on a page or in a gallery—lends itself to infinite possibilities for his artwork. This belief has led him to create DoodleLand, a place in which his work invades almost every surface that it comes into contact with. The black and white line drawings move from the walls and onto the likes of furniture, the floor, and clothing. When he's done, it's hard to distinguish between different surfaces; the doodles cloak everything in 2D drawings and flatten three-dimensional spaces.

We spoke with Cox about his doodling past, as well as where his drawings are taking him next. Scroll down to read My Modern Met's exclusive interview and watch him in action. 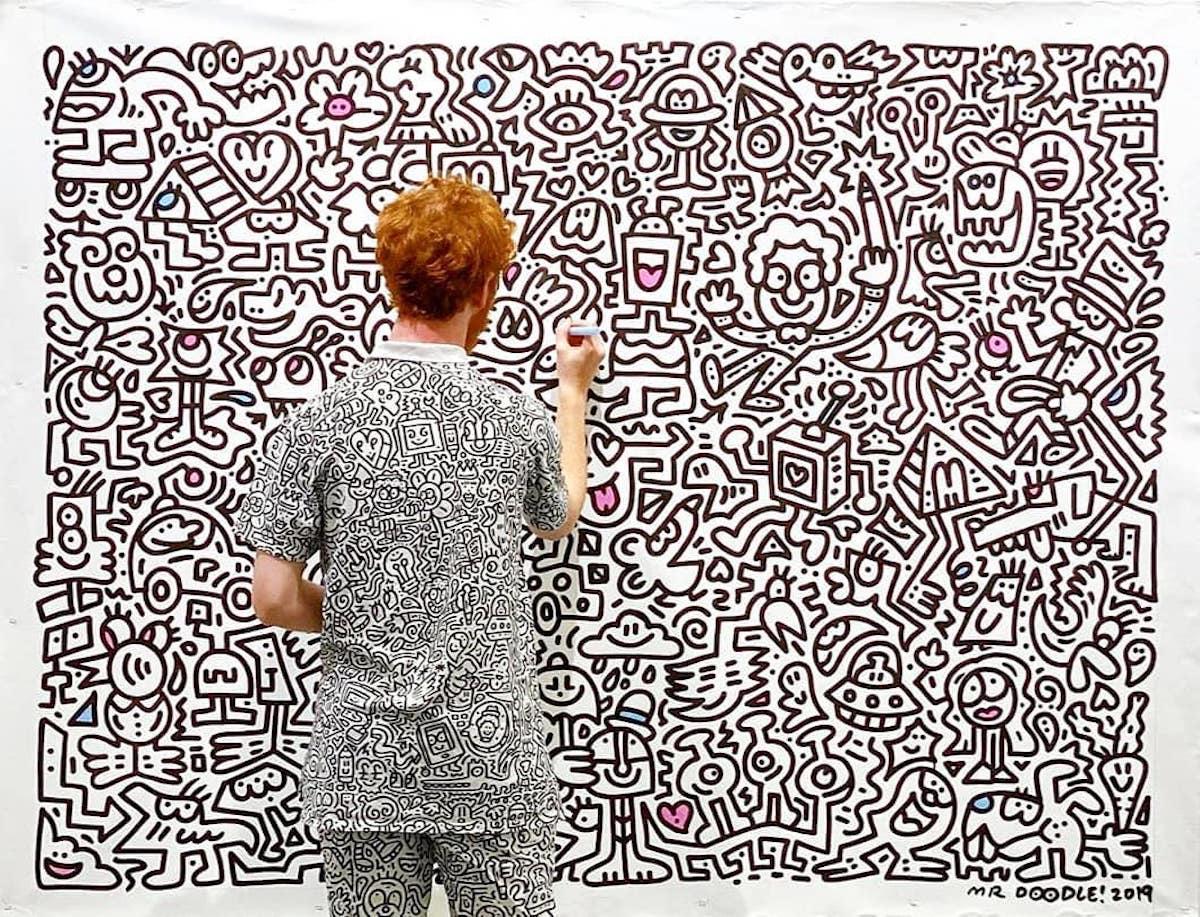 You've been doodling since you were a kid. What were your early drawings like?

When I was a kid I was very inspired by video games and cartoons. I used to design characters who I wanted to appear within my own ideas for similar video games and cartoons, so I created drawings of the same character over and over, practicing their eyeballs, facial expressions etc. So most of my work was full of the same character repeated but drawn in slightly different variations. I also drew big maps and things for planning out my video game levels. I loved creating imaginary worlds where all my characters would roam around and do fun things in. My drawings were all created in pencil when I was between the ages of 0-13, and many of the pieces were huge comics about fictional adventures I'd have with my friends where we would fight aliens.

How are they similar or different from your work today?

The work is actually still similar today in terms of aesthetics, it’s very cartoony, playful, and humorous, which are aspects I always try to retain within my style. 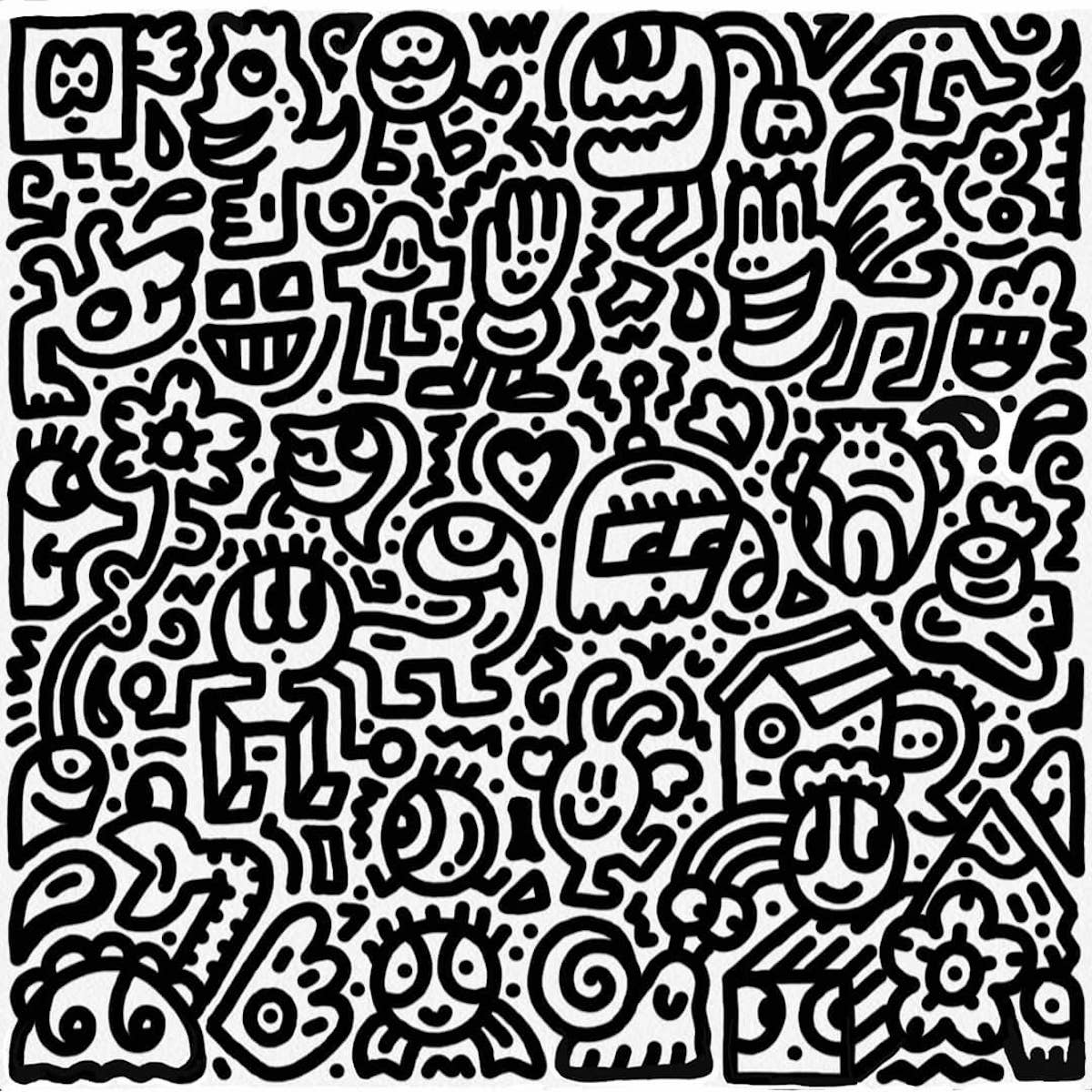 Your work is full of symbols upon symbols. Can you walk us through some of your favorite characters or motifs that appear in your drawings?

I often draw my “Mr. Doodle” character within my pieces. He is frequently hiding within the patterns and characters, waving hello to the audience. I also love drawing the alien UFO, the robot, the chicken bird thing, and many other characters. However, I always try and vary the characters so they at least look slightly different/evolved from drawing to drawing. 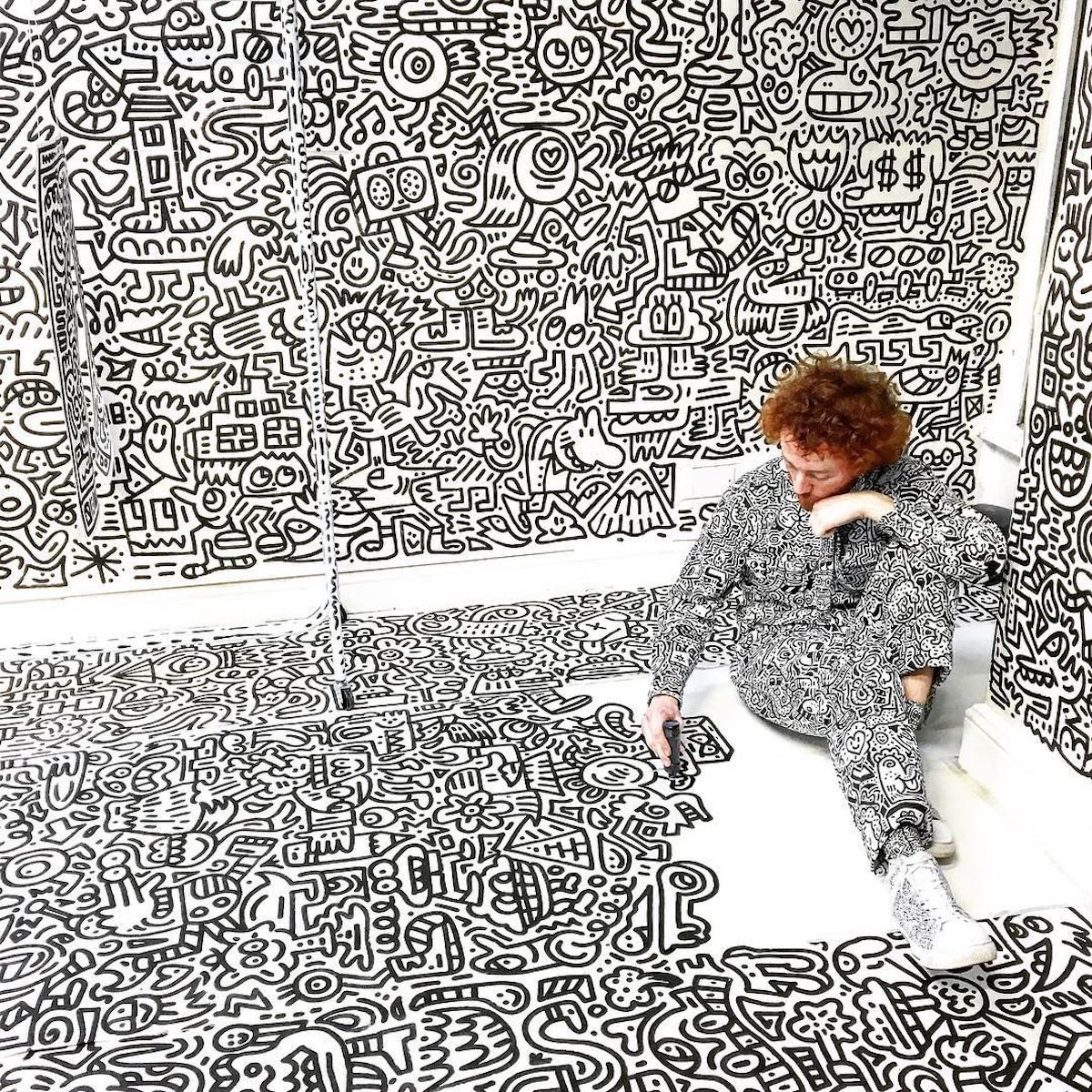 With your larger murals, do you go in with a plan of what you'll draw, or is it more spontaneous than that?

I normally go in with no plan at all. Though sometimes I do have a slight theme in mind if the work is specifically for a particular client or brand who wants to communicate something. However, I never pre-plan anything because it kills the work, it always suffers because of this, so I allow the work to form naturally like a true doodle, whilst keeping part of my brain focused on some kind of narrative, but the other 80% thinking about random stuff so that my hand can relax and flow easily. 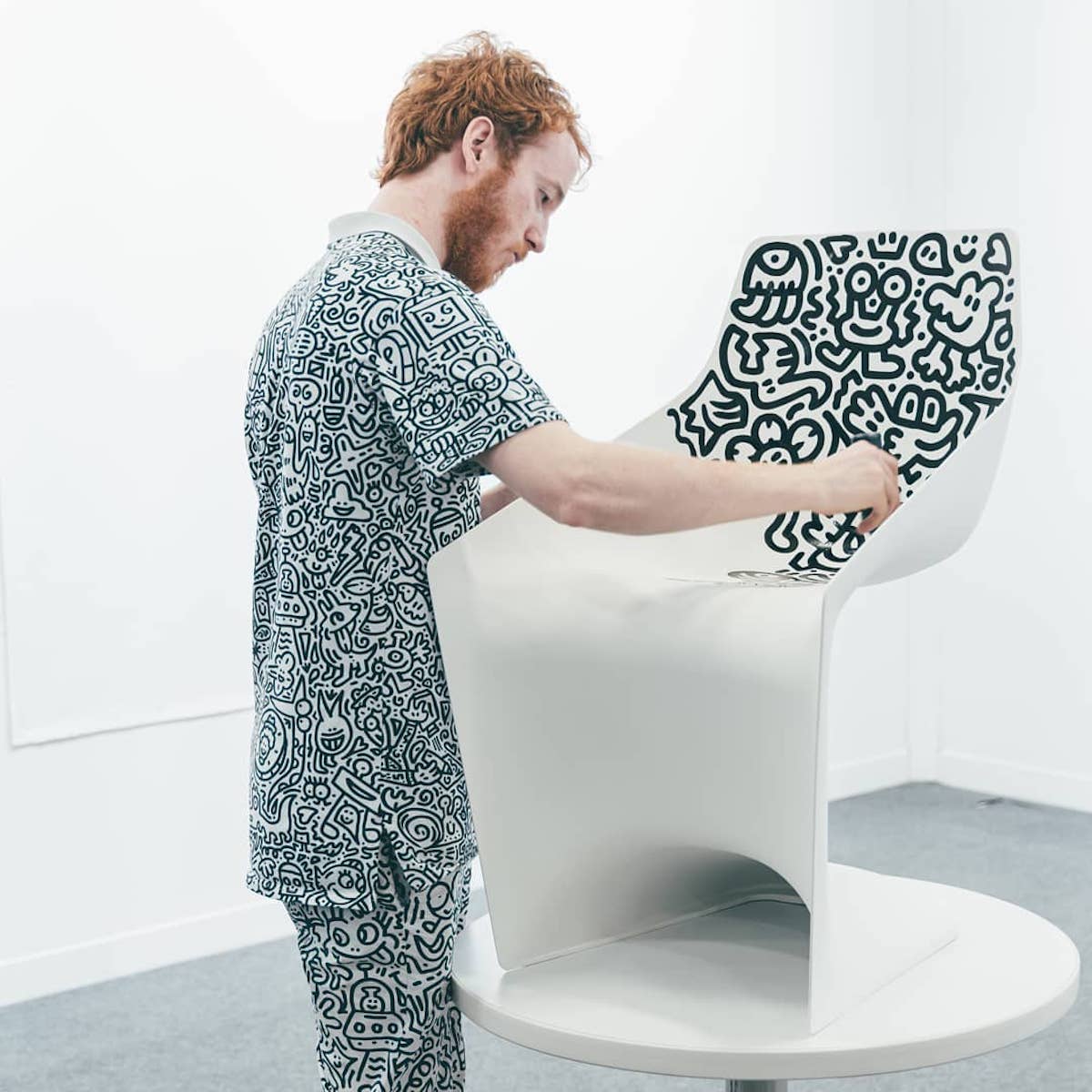 You're incredibly prolific. How do you ensure that you doodles feel exciting and fresh—both to the audience and more importantly, yourself?

Thank you! I just love doodling, it really is my favorite thing to do. I have found that when you love something as much as this then it’s just a case of spending all your time doing it and watching it grow naturally. It organically bounces off mistakes that I make in the studio or on-site on a mural and these mistakes make new styles and ideas for me to work with. There are so many ways I can reimagine my work, with tiny doodles within big doodles, to one line doodles within giant spray-painted doodles, there are endless possibilities. 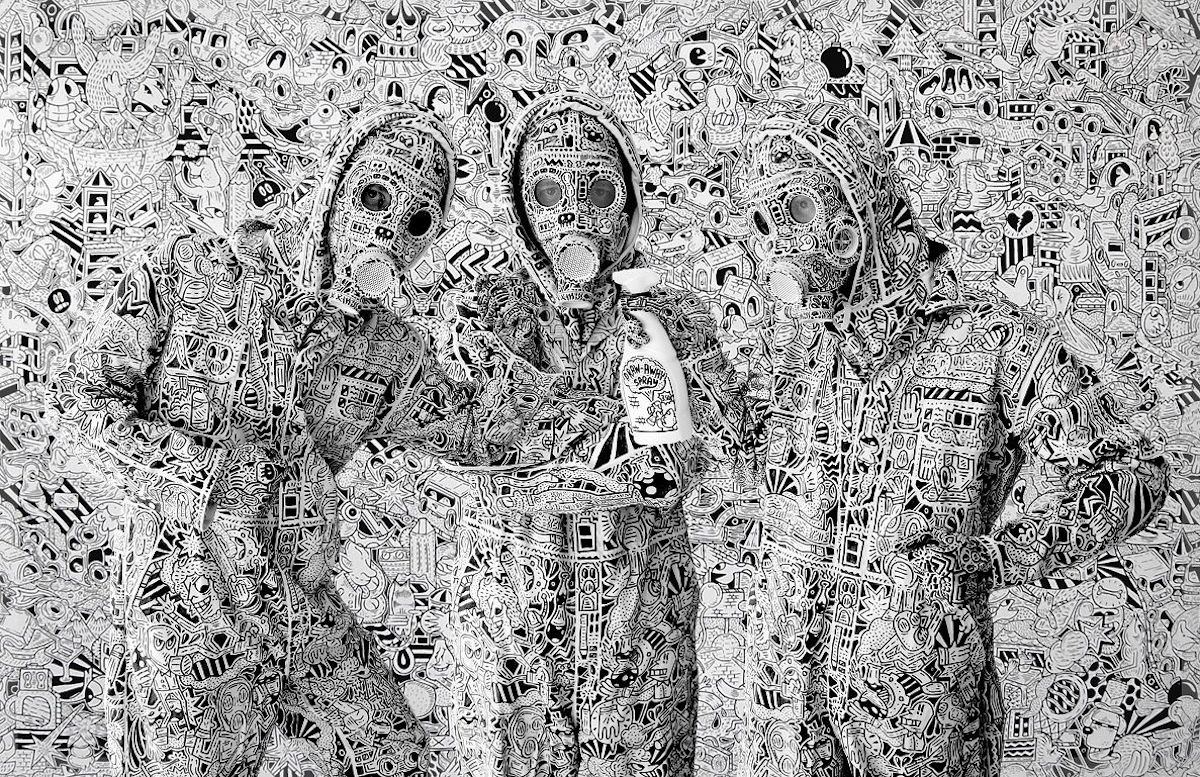 You've participated in many exhibitions. Can you tell us about one of your favorites and what made it so special?

My live doodle event in Mexico this year for the British Embassy was quite special. I got a really surprising response to my work, people really loved it and I had some fans come up to the car I was being driven around in, they were banging on the window asking me to doodle on their phones, it was crazy! I really loved it!

What are your tips for anyone that is looking to start doodling? 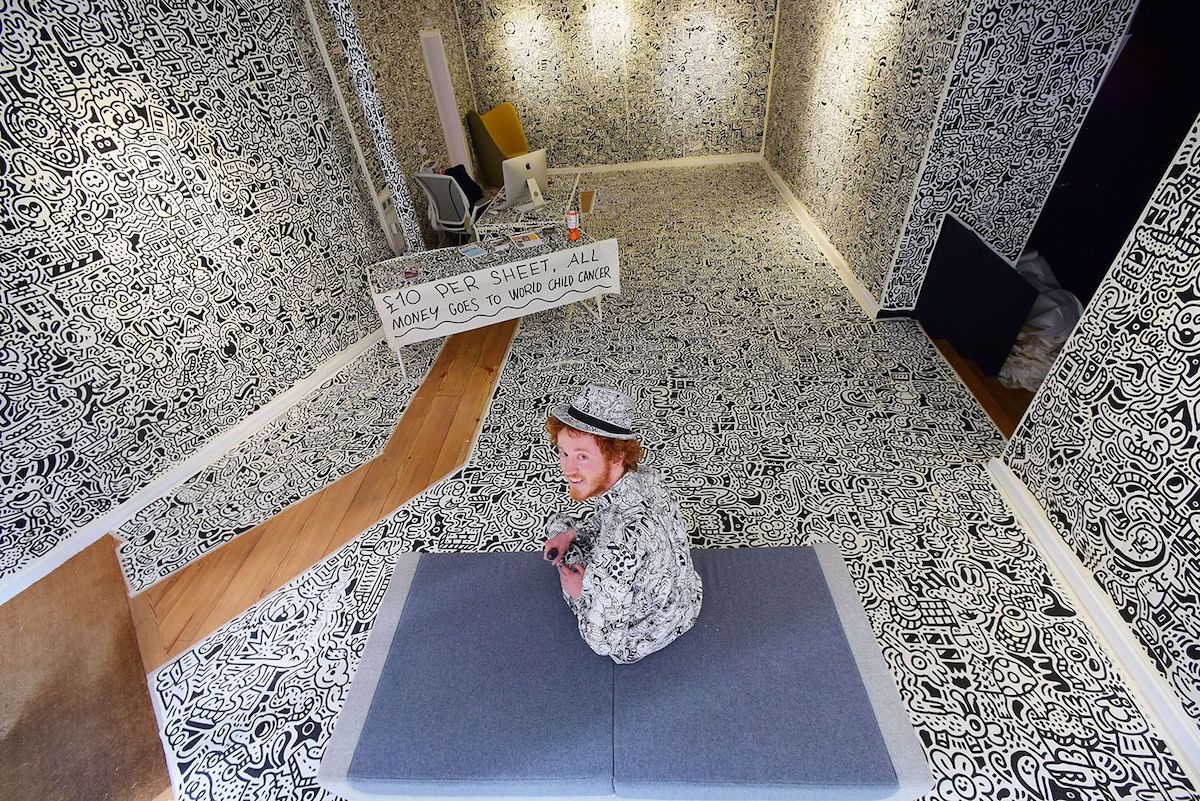 Anything exciting on the horizon that you can tell us about?

I have a few exciting collaborations coming out next year, so stay tuned to see some doodle clothing available! I also have a very exciting personal project coming up, where I will be doodling over one of my dream spaces! These projects will be public throughout next year and I'm really looking forward to them. I hope 2020 will be a great year for doodling! 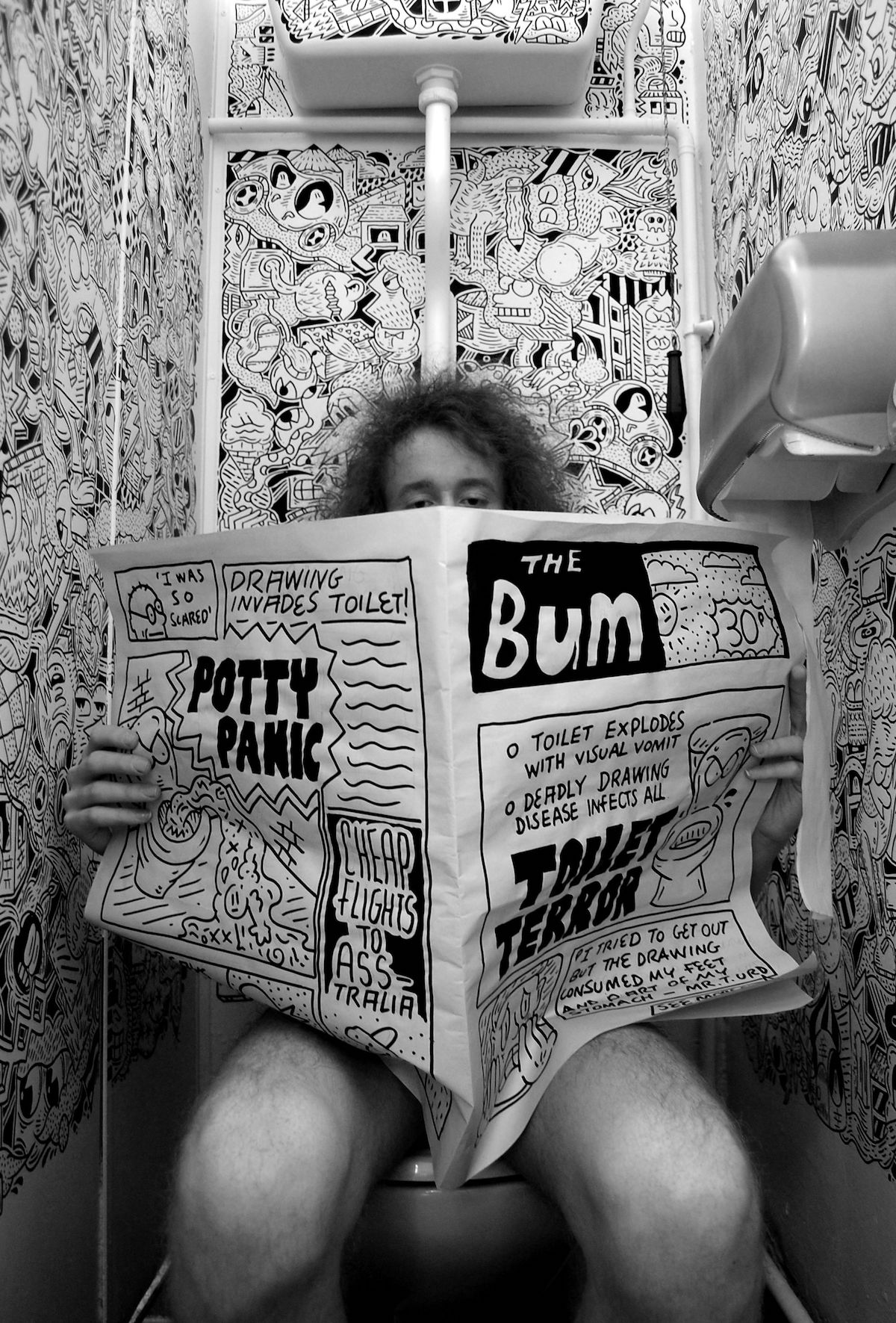 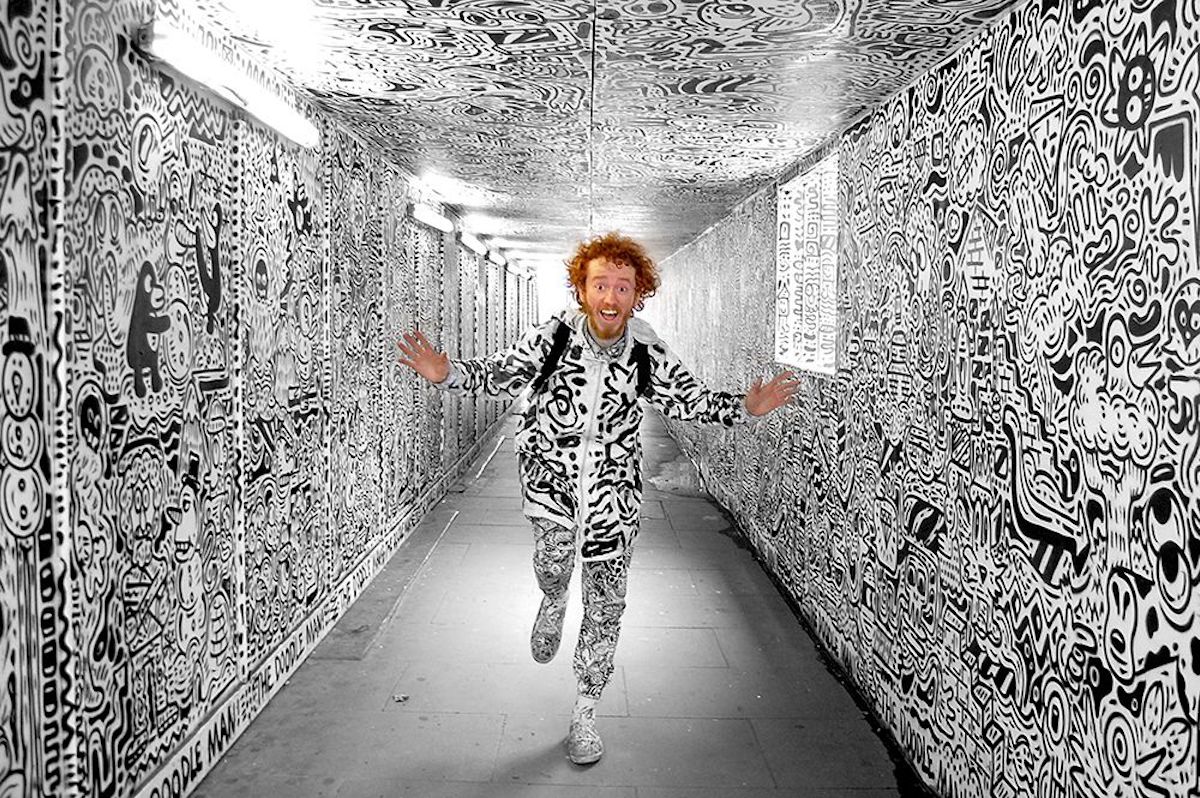 Watch Mr. Doodle in action in the video below:

50+ Doodle Ideas That Everyone Will Have Fun Sketching

Enjoy doodling? Share
Like My Modern Met on Facebook
Get Our Weekly Newsletter
Become a
My Modern Met Member
As a member, you'll join us in our effort to support the arts.
Become a Member
Explore member benefits