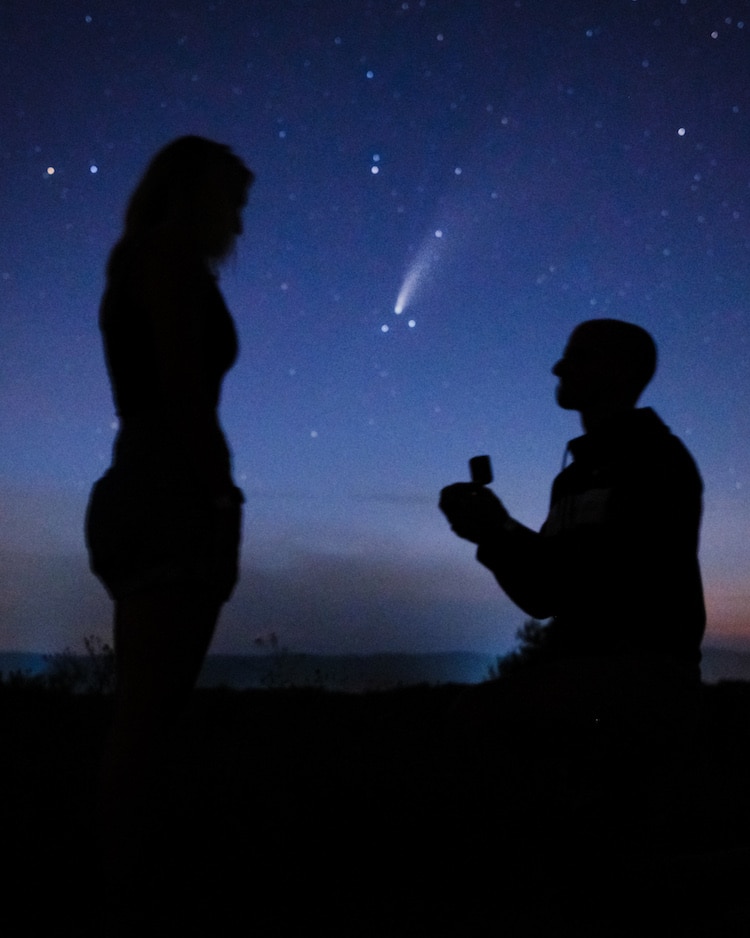 Many people look to make their wedding proposal special, but for John Nicotera and Erica Pendrak it turned into a once-in-a-lifetime event. By taking advantage of an astrological event that only happens once every 6,800 years, Nicotera was able to make his engagement one to remember; and, luckily, photographer Tim Leach was on hand to capture it all.

Nicotera, who is a physical education teacher, had already been planning on proposing to his girlfriend of two years, first grade teacher Erica Pendrak, for some time. But when COVID-19 foiled his original plans, which entailed proposing during a trip to Oregon's Crater Lake, he started looking for something special close to home. Nicotera is a big astronomy fan and regularly follows space resources to see about upcoming events.

When he heard about the Neowise Comet, which was visible in the Northern Hemisphere for one week in July, he knew it would make a great moment. As Erica often accompanied him in watching SpaceX launches and stargazing, she didn't suspect anything when he suggested a weekend trip to a family home in the Adirondacks to take in the show.

“This comet won't be back for 6,800 years, so it's definitely more than a once-in-a-lifetime experience—it's more like a once in 6,000 lifetimes,” he tells My Modern Met. “Once I decided and gave myself my pep talk—'Ok John you're doing this, you can't dilly dally, it's going to be gone by next week'—I knew I had to do my homework.”

That's when he got his friend, photographer Tim Leach involved. Leach had already been having success in capturing the spectacular comet and helped with location scouting. Originally, there was no plan for him to be present at the proposal, but after a few mishaps, Leach invited the couple to come and watch the comet with him. Mind you, at this point, he had no idea a proposal was about to happen, as Nicotera hadn't told anyone.

“At this point, I texted Tim back saying yes, and then I spilled the beans on my proposal plans. It was actually his idea to stage the event, he could take ‘couples' photos of us in the night sky, with the hopes of capturing NEOWISE too. I knew Erica would love the pictures of us, so she would not be suspicious of anything going on, like a proposal.” 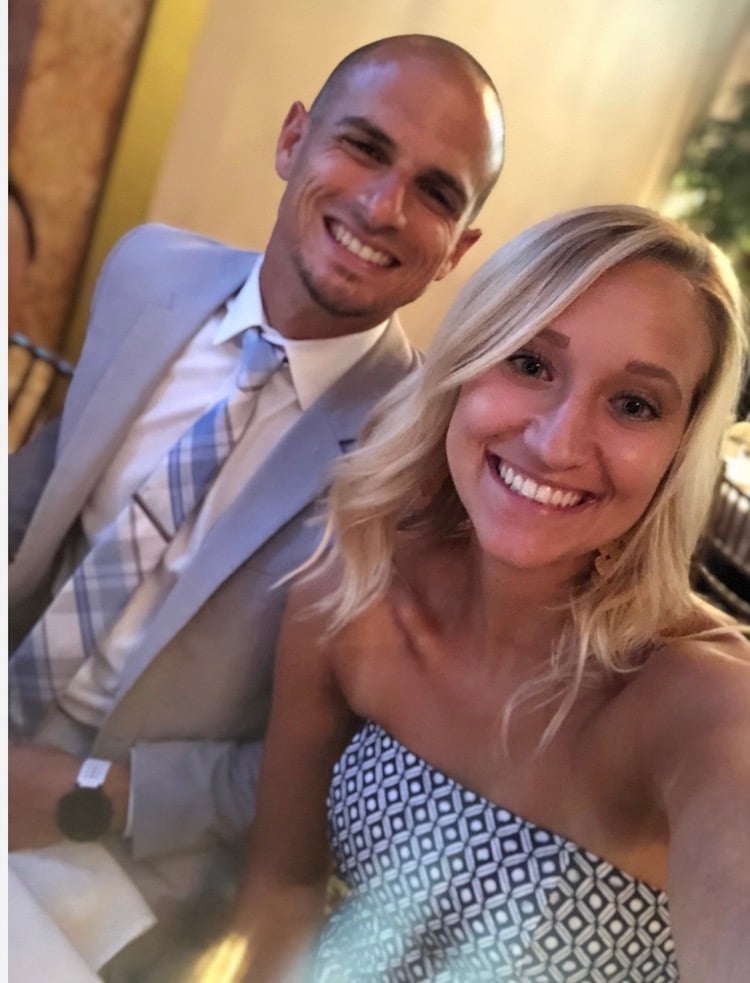 After gazing at the comet for a few hours and taking some photos for Leach, Nicotera whispered that the big event was about to take place. Leach just asked that they try to stand still for seven seconds so he could get the perfect photo of them and the comet. And with that, Nicotera went down on one knee, with Erica none the wiser about what was happening.

“She was anticipating another picture together, little did she know I was about to propose. I asked Erica if she was ready, hinting at I was about to blow her mind, and she innocently said yes. I asked her again, and when she said yes, I kneeled down, asked her to marry me…after she was in complete awe, and said YES—I then teased her that she could not move for seven seconds. Seven seconds is a very long time, by the way.”

Post-proposal, Nicotera tweeted the photographs to some of his favorite space heroes, including retired astronaut Garret Reisman. After Reisman retweeted the post, it got picked up by several meteorologists and snowballed into something bigger than the couple could have ever anticipated. “We really can't believe our story has now been shared globally. It's crazy; it's hard to put in words. We are both so extremely grateful for everyone reaching out to us and are so humbled that we get to share our story.”

And while the attention has been nice, in the end, Nicotera is just happy that he could give his fiancée a special evening that they'll remember forever.

“I just wanted a moment together that would be special, I knew the night sky could be beautiful, weather permitting, and that with us together and a comet that only comes every 6,800 years it'd be pretty rare. But really I just wanted something, anything, that I could share with Erica for the rest of my life. I wanted to have a time that she and I could freeze and remember the rest of our lives.”

John Nicotera was looking for a special way to propose to his girlfriend Erica Pendrak. 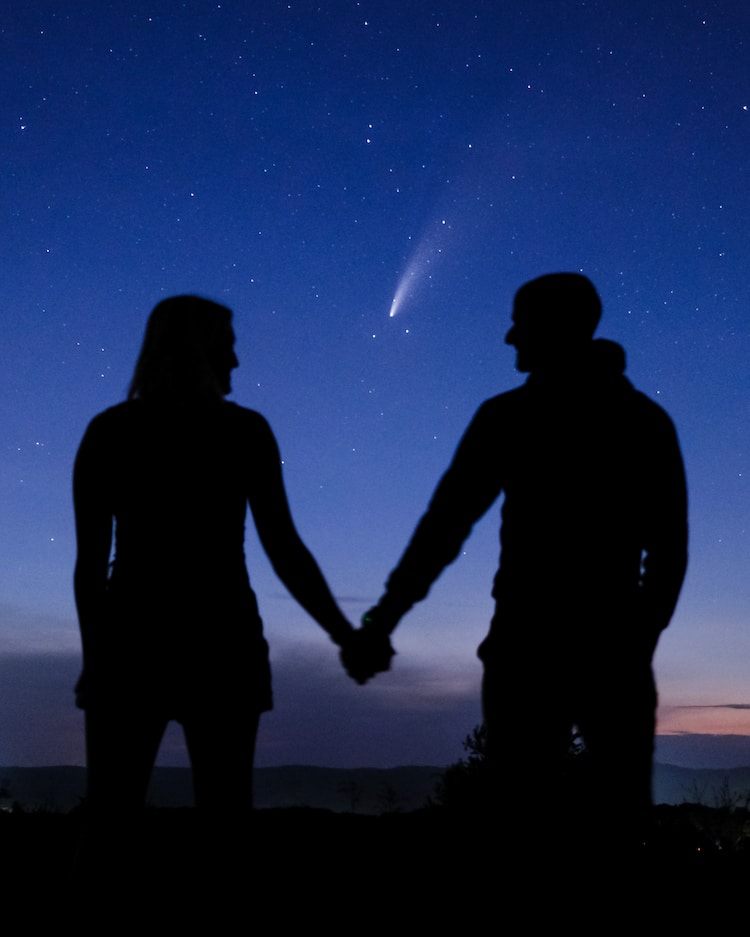 So while enjoying an evening looking at the Neowise Comet, he seized the moment. 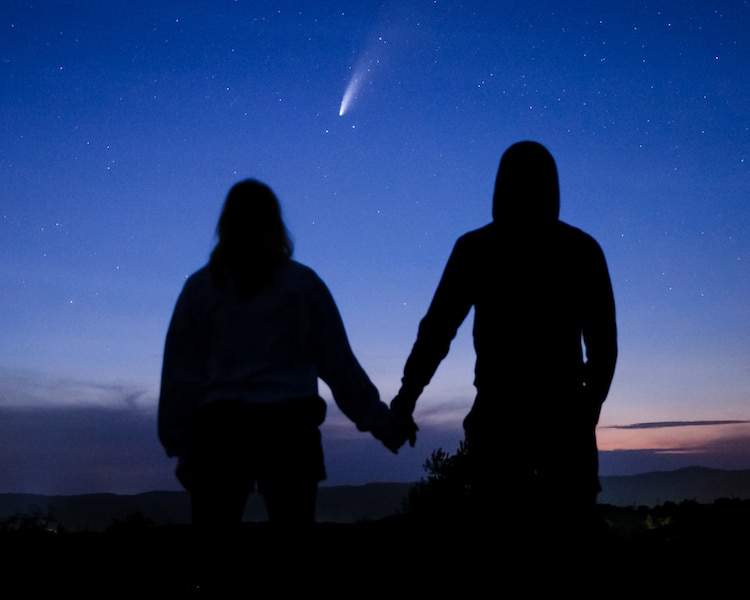 And made the perfect proposal under the comet that only appears once every 6,800 years. 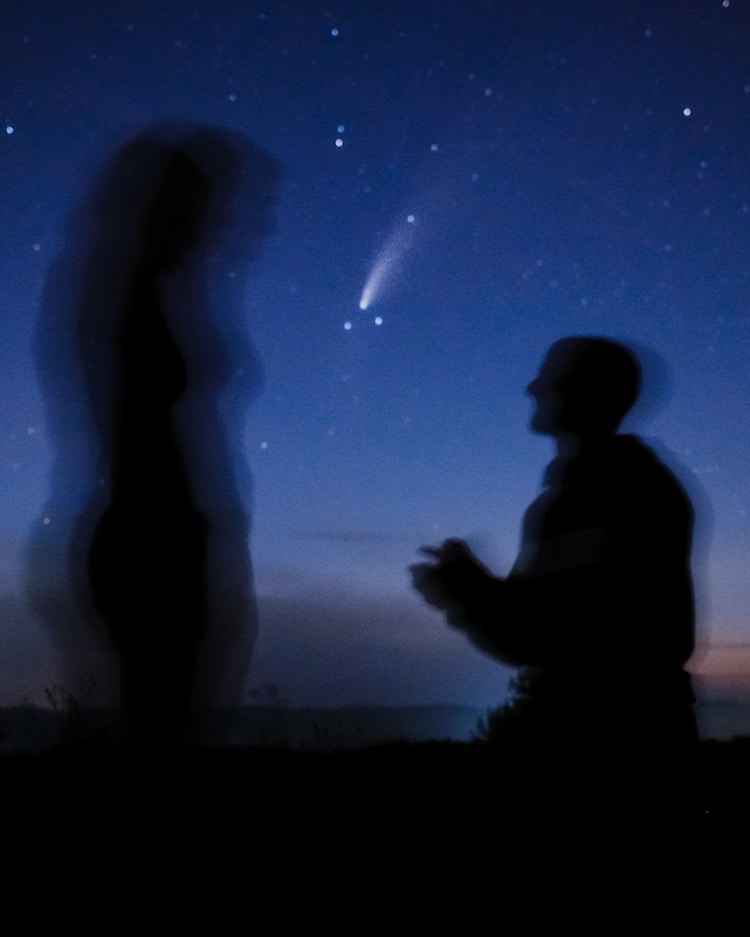 Stunning Photos of a Marriage Proposal in an Icelandic Ice Cave