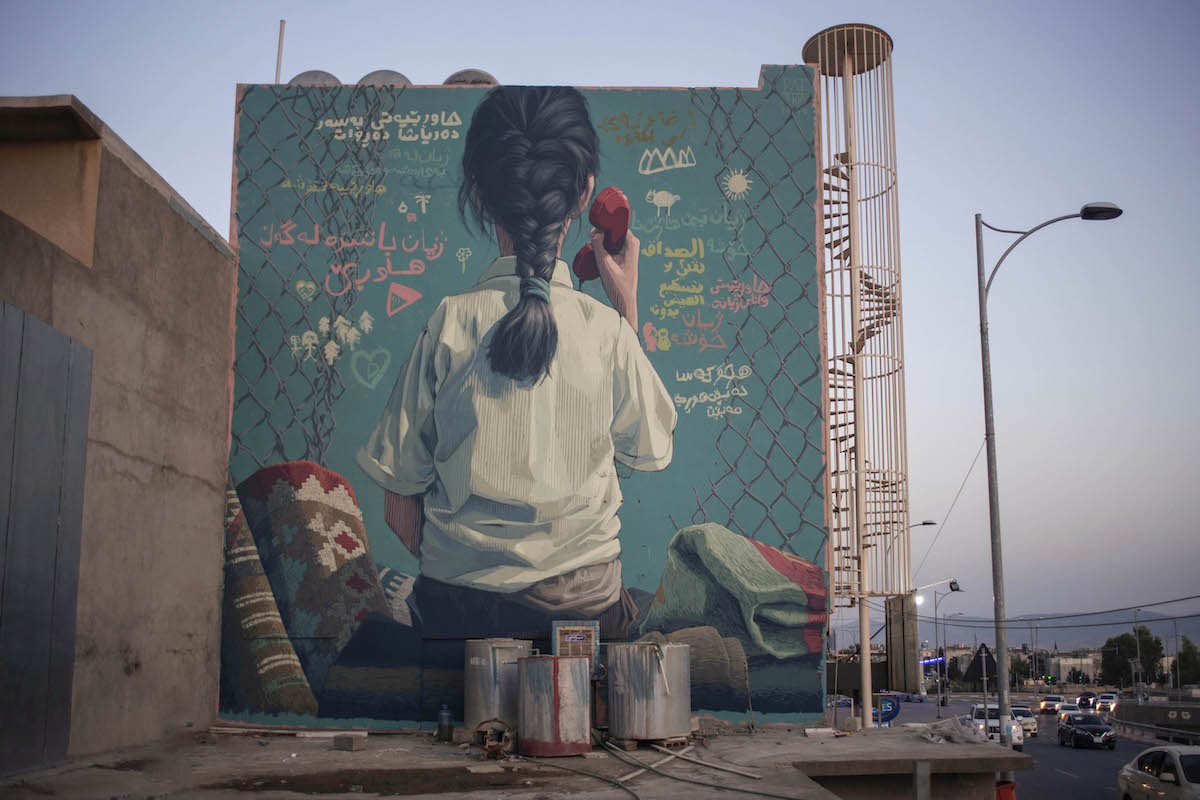 Though they live more than 5,500 miles apart, children in Slemani, Iraq and Biddeford, Maine are showing the positive things that unite us rather than divide us. Working with street artist Pat Perry, two fifth grade classes in Iraq and the United States exchanged ideas and helped shape the vision for two largescale murals, one in each place. The children also assisted in the artwork, painting messages of hope and friendship in both English and Arabic.

Opening Lines is the name of this project, which aims to show just how globally connected humans are at this time in history. The project was organized by aptART (Awareness & Prevention Through Art), a nonprofit founded by Samantha Robison that has created socially conscious art installations all over the world, and The Good Works Foundation, an organization that aims to teach children the values of empathy, kindness, and love through books, TV series, and other media.

To execute the project, the children communicated with each other about their daily lives and culture by exchanging videos, drawings, and photos over the course of a month. Perry then spent 10 days in each location, much of which was in each classroom. By talking, painting, and playing with them, the children became the inspiration for the concept of the murals, as well as participants in their execution.

The results are two beautifully executed and meaningful murals where we see two children breaking through fences and chatting on the phone—one in Iraq, one in the United States. Surrounding them are positive messages of friendship and love painted on the wall by the children. Both metaphorically and visually we see the open lines of communication that can help unite us.

After the overwhelming success of the project, all parties involved plan on continuing. The next exchange is already in the works, this time involving children from Kentucky and Mexico. Stay tuned for more developments via the One Blue Sky website and read on for My Modern Met’s exclusive interview with artist Pat Perry as he shares his experiences partaking in this special project. 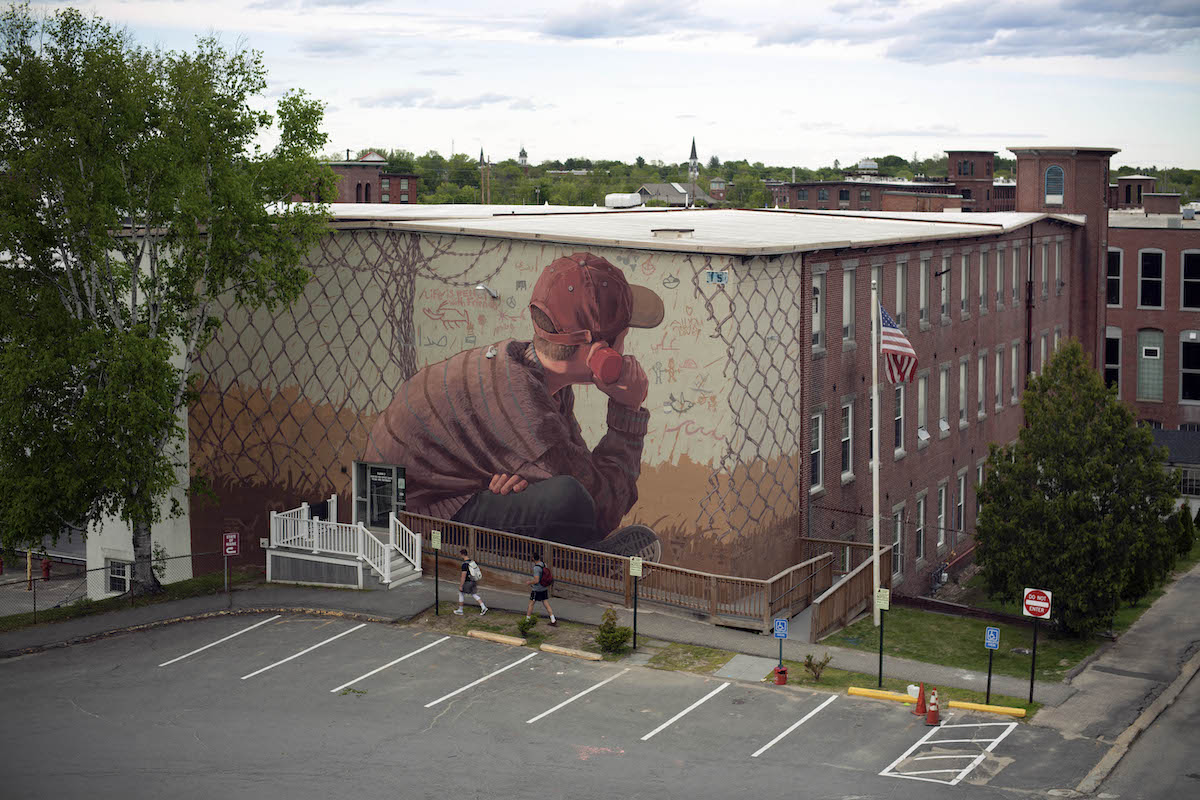 How did you initially get involved with the project?

Samantha—the main human engine behind AptArts–and I worked on our first project together in Iraq in 2018. We painted two murals with groups of Syrian refugees in Sulaymaniyah and at the Arbat refugee camp in conjunction with UNHCR. Almost immediately after, we started brainstorming ways to work together again on another project in the Middle East.

I think we get along well because neither of us mind sleeping on the floor, eating junk food, and dealing with half-broken boom lifts in the hot sun if it means we get to make something that our hearts are really in. I also really like that Samantha and I have been able to edit each other's ideas and concepts. We try to improve and build on each others' ideas without anyone feeling offended or wholly attached to their own vision completely; I think its made our projects together stronger in the end.

As Samantha can also surely attest, remote art projects outside the bounds of typical spaces that murals are installed are also often the hardest to fund. Lucky for us, Laura Rodgers and the Goodworks Foundation really shared a vision for what we could accomplish and supported us immensely in making this project come to fruition. 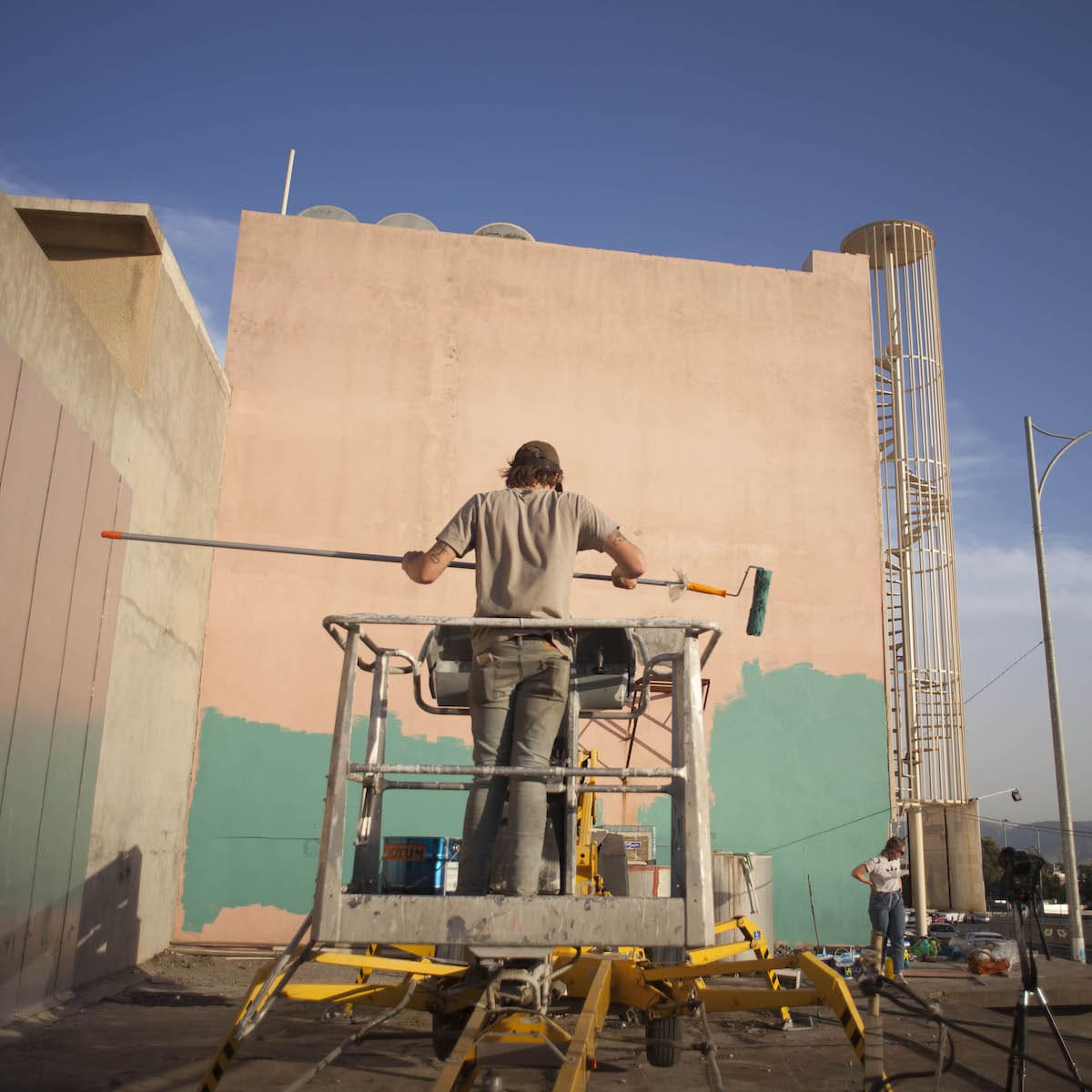 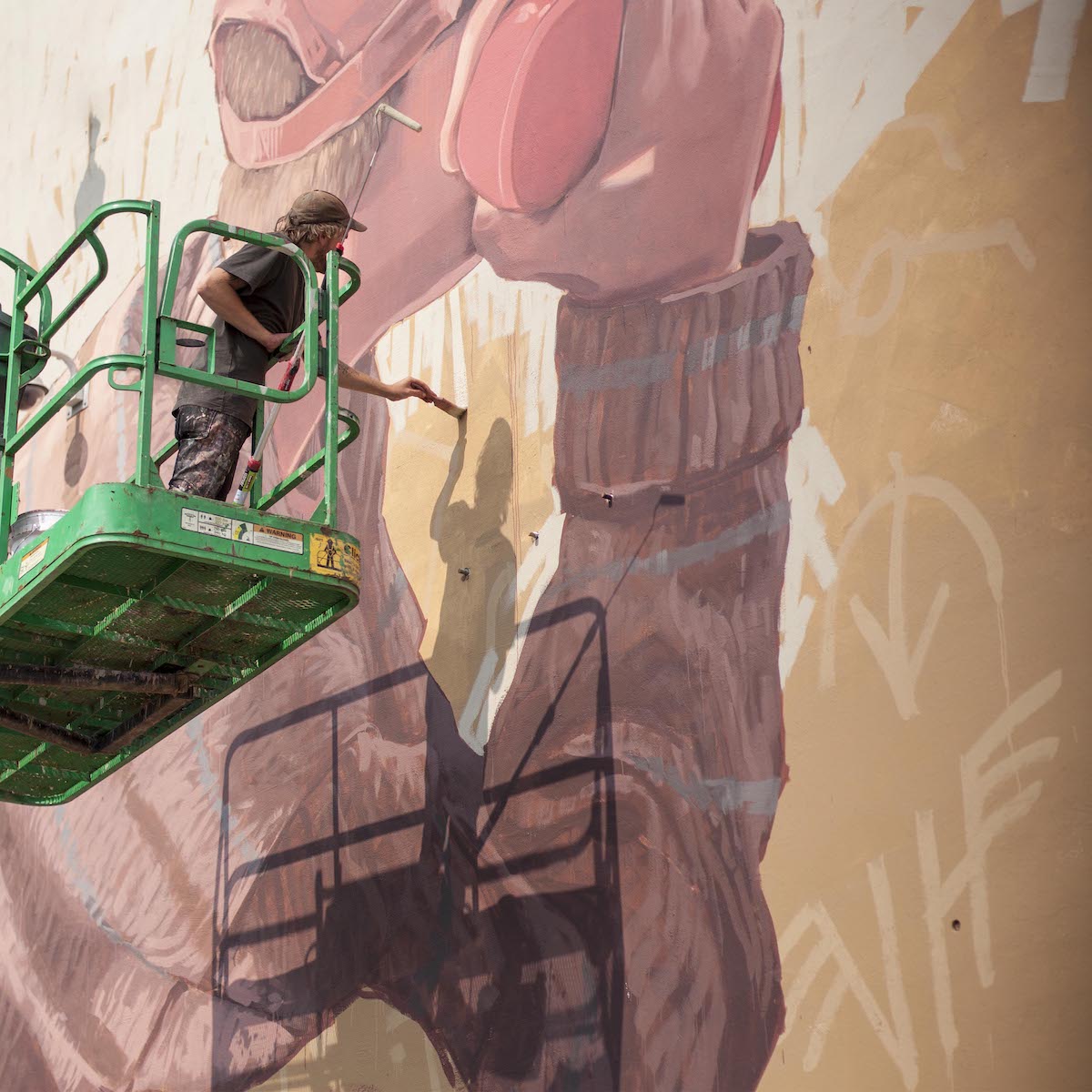 Why is it important for you, as an artist, to get involved with these sort of social projects?

That's all in the job description; I think artists are supposed to try to add what's missing. I think political art often lacks human generosity for people we don't see eye to eye with. I think a lot of strong ideology and social activism belittles people in its didactic approach. And that's fine, we all do that some of the time; but as long as there are frustrations, there's a motivation to at least try to make art in a social context that feels more accessible and open to the people that the work is going to directly address.

My friend Nick just became a father, and he said to me recently that art pretty much saved his life. It was a wake-up call to hear that and reflect on it. Especially through my teenage years, it pretty much saved mine too. It sounds hokey, but it's true. When I think about that, it makes me feel like there might be a couple of kids out there I could help in a huge way by turning them onto drawing and painting. 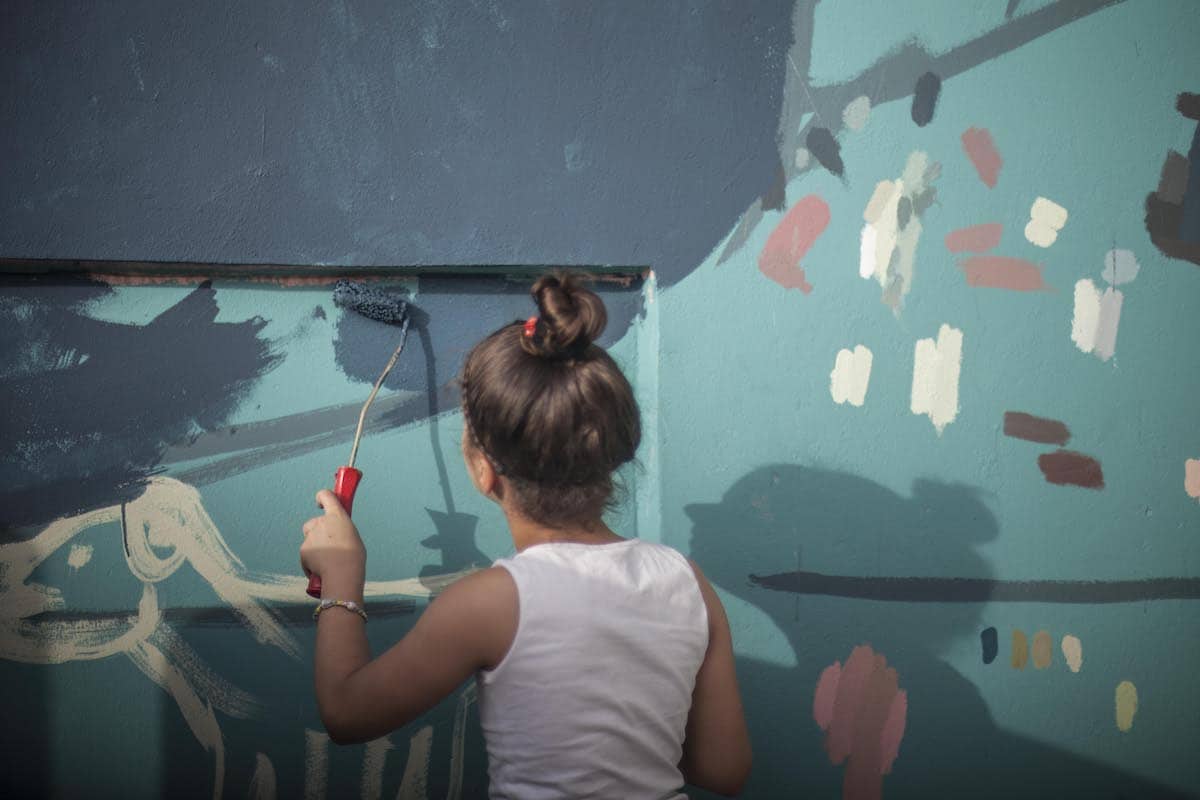 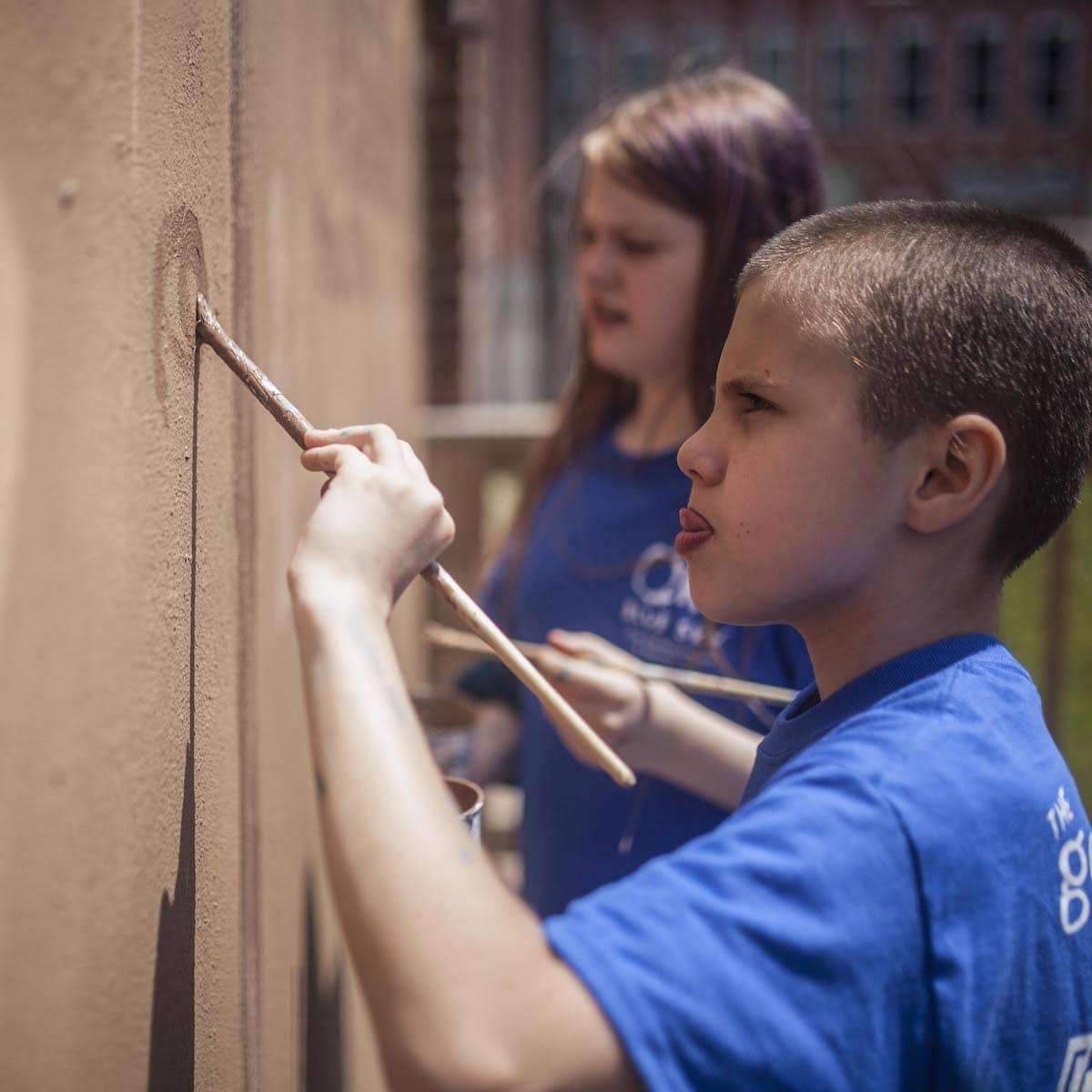 Can you share a bit about your experience in Iraq? How were you received by the kids?

The kids were so excited to meet, and to get to paint. I'm sure it's tiring wrangling a classroom of energetic kids day in and day out, but for me its really a treat because I don't get to spend time with kids that often. It's not just hyperbole to really emphasize how similar the kids were in both places: thoughtful, sweet, engaged, curious, and willing to express themselves and communicate with us. 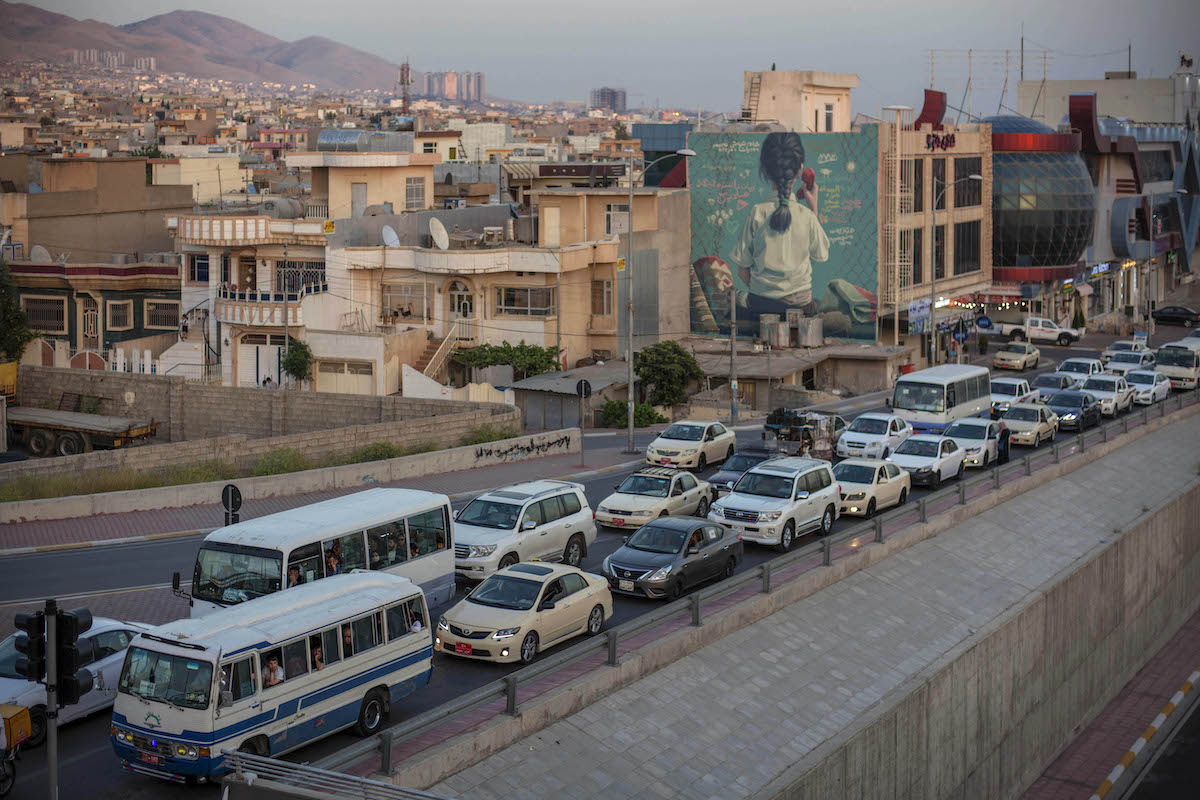 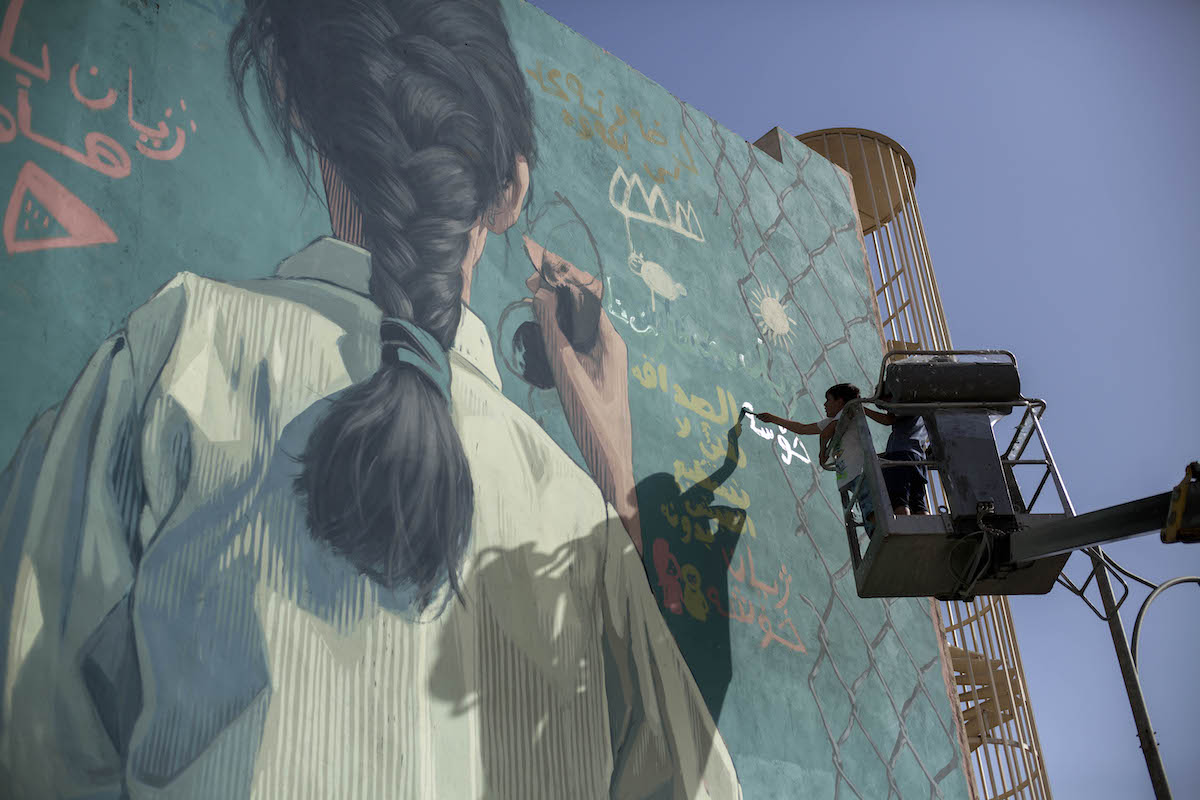 What was the most surprising part of your time there?

What's surprising to me about being in Kurdish Iraq is the continued modernization of the country and the Western culture that so often is a companion to that modernizing. I feel anxious, in a way, to see the rest of the world becoming saturated with American movies, music, and culture—kids on Instagram, wearing Nikes, talking about Game of Thrones.

That concern really has more to do with what I want Iraq to be though, how I want these faraway countries to fit into some poetic narrative I use to make sense of the world. I come from a place that's always had the newest technology, relative safety, reliable electricity, close to ubiquitous access to clean water, etc. It's strange to witness globalization but it is ridiculous for me to judge when other countries feel the appeal of obtaining the things I'm so used to that they're practically invisible to me at home.

How did the composition for the murals come about?

I didn't arrive with a solid idea. We came up with it as a team once I arrived. 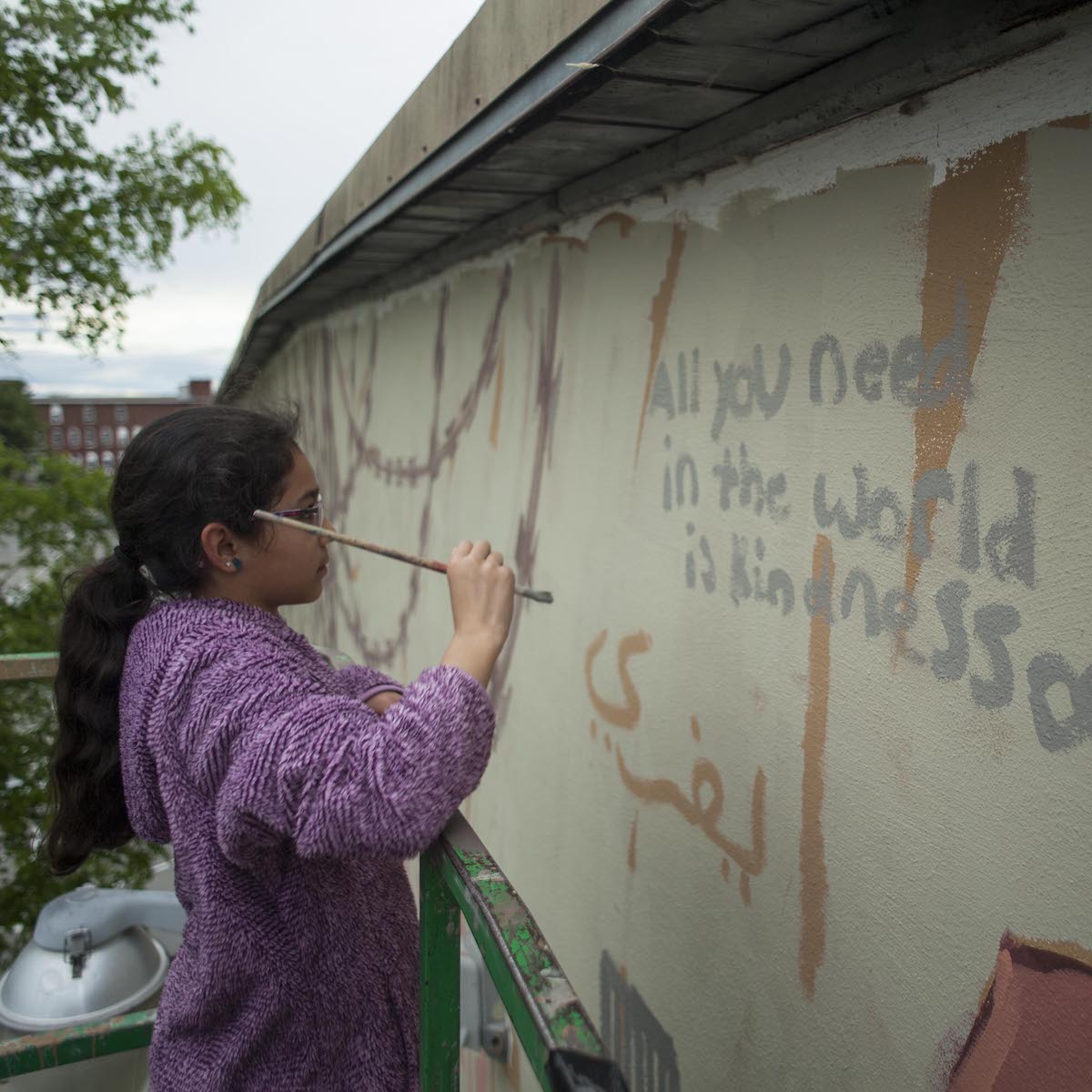 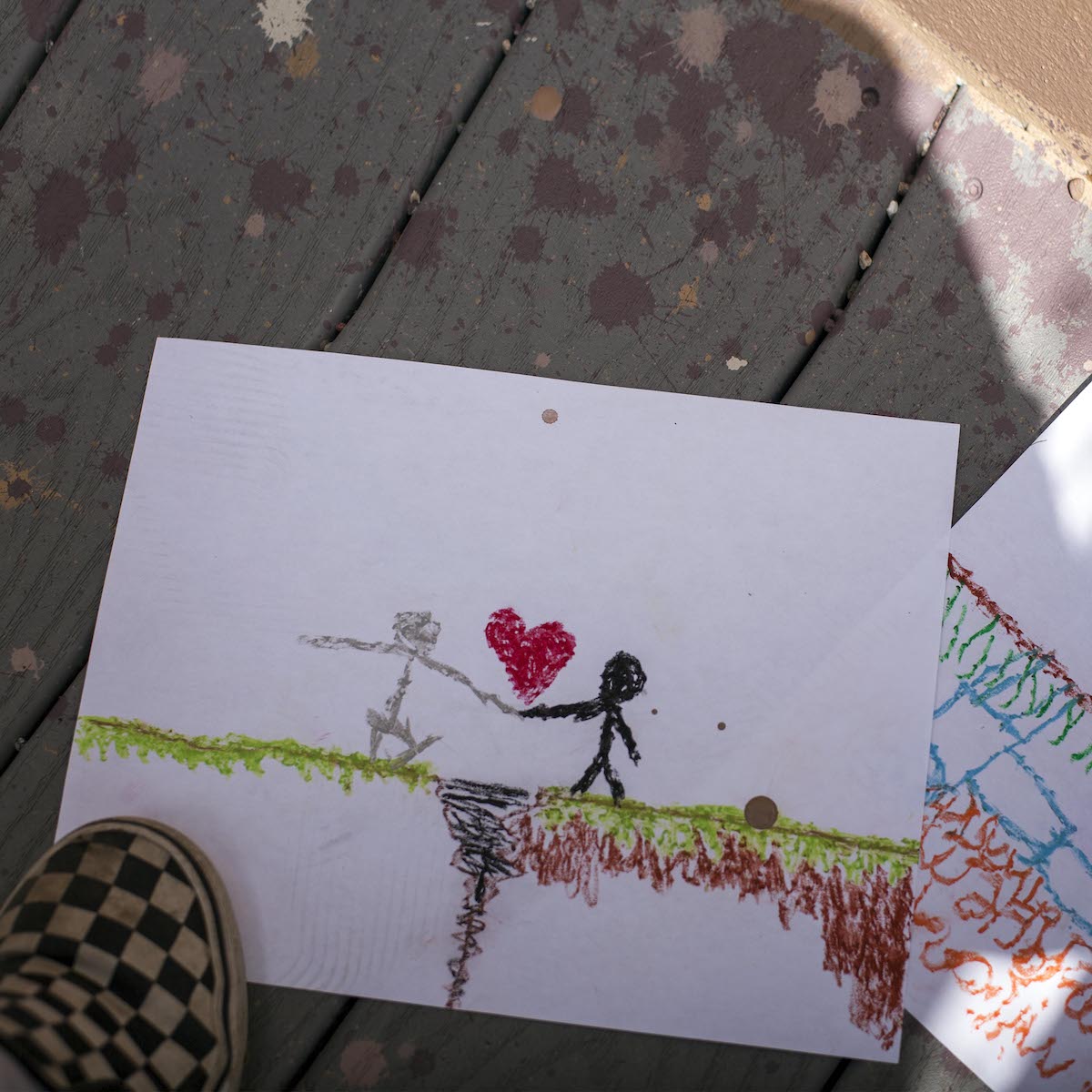 Why was the involvement of the children so important to the overall message of the piece?

The involvement of the kids was the piece. The paintings themselves and photos of them on the internet were all added extras. We were all interested in making something inspiring we could widely share, but first and foremost, all of us wanted to make a memorable experience for these kids. One day when we were in Maine, I wanted to paint over and move where some of the kids had already painted and redo that section of the mural, because I was in total “final-product mode.” It's times like that where Samantha always shakes me to get with the program and remember that the process with the kids is more important in this context than caring about the final painting. 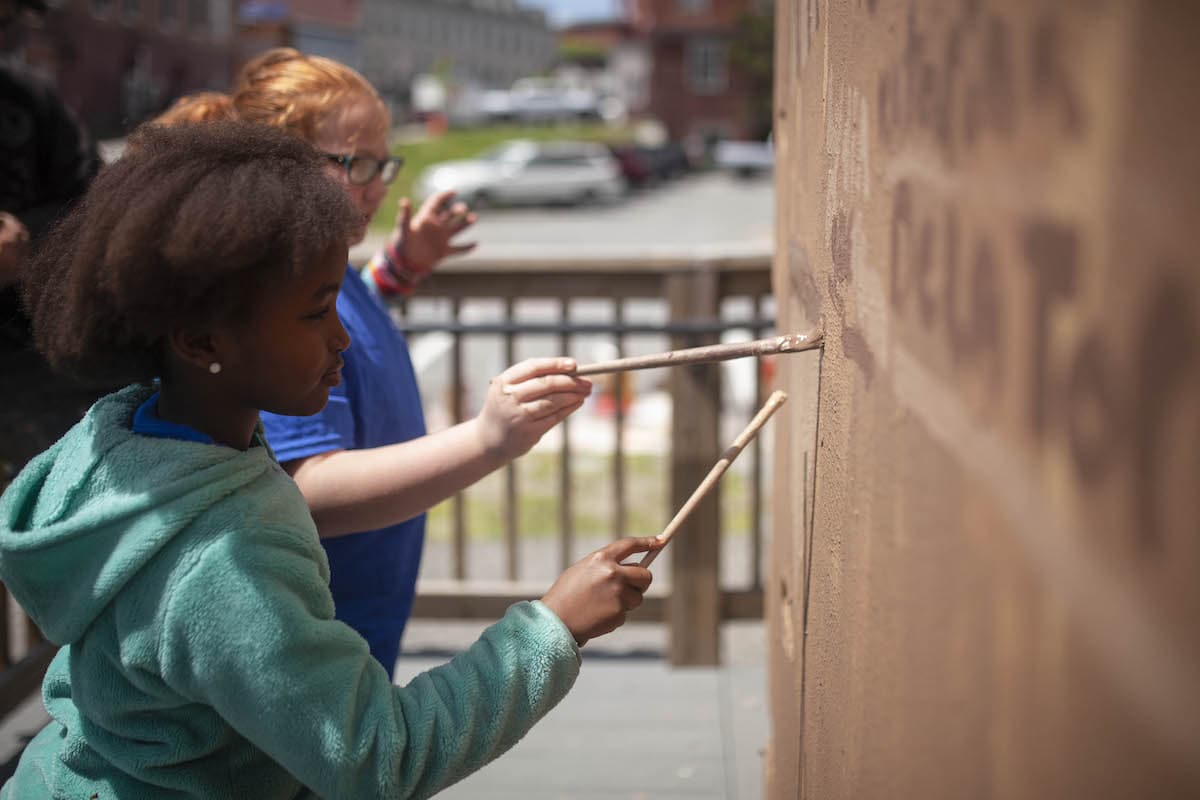 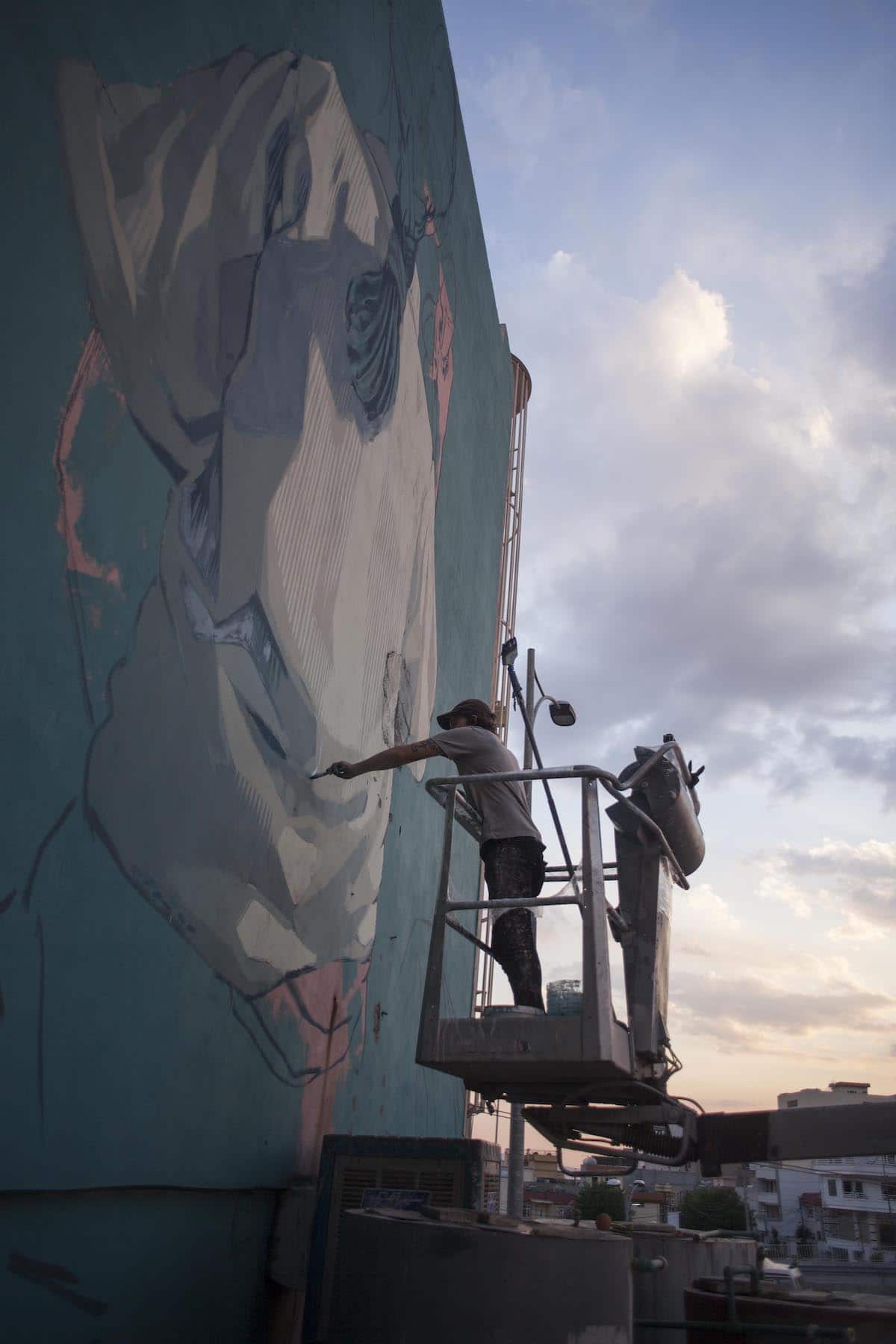 Can you share some of the messages that the kids included in the artwork?

“Friendship can even go through seas.”
“Life is better with friends.”
“A million friends isn't a miracle. One friend that sticks with you is a miracle.” 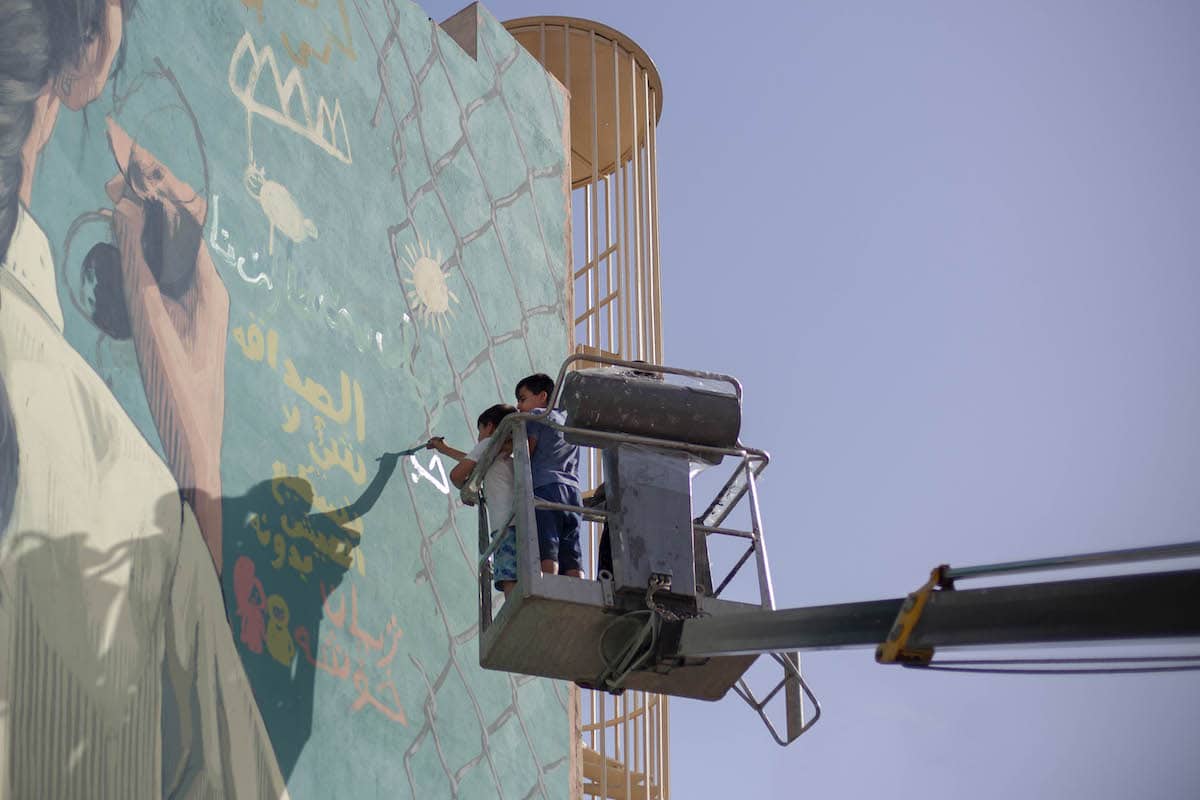 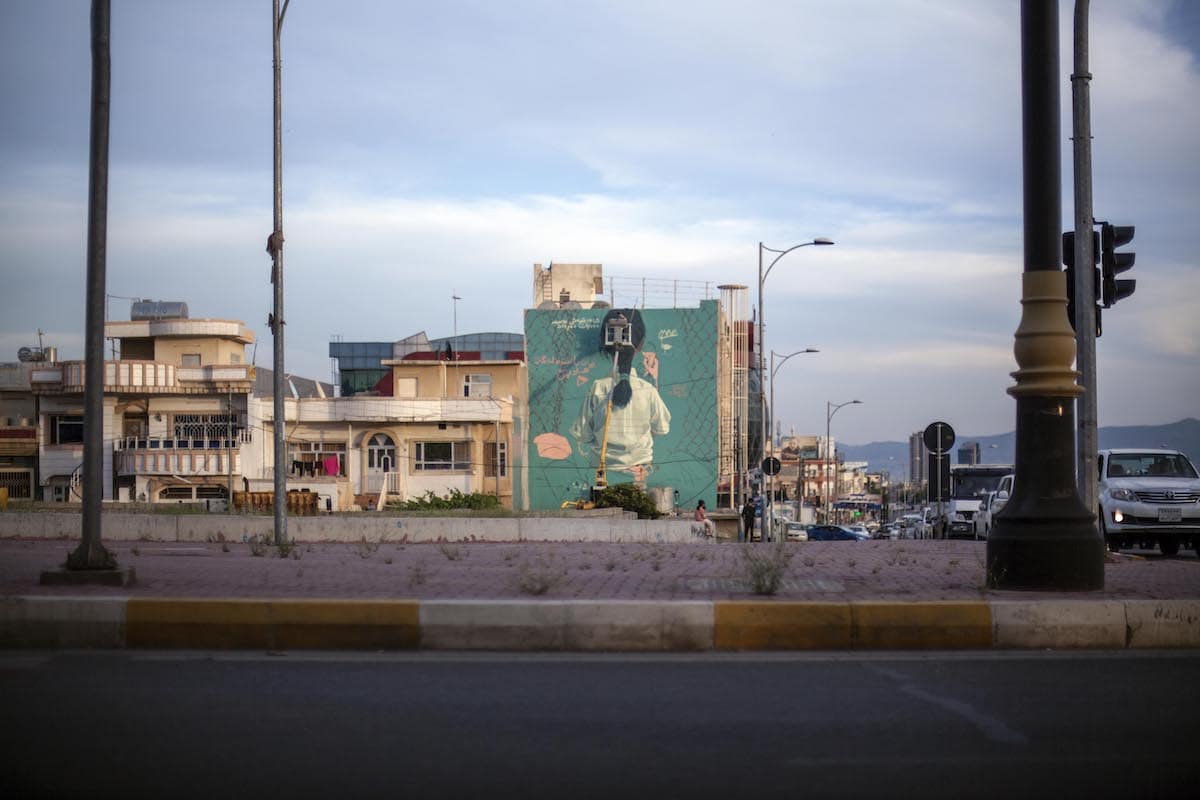 What do you hope that the public takes away from this work?

All different types of people are colliding constantly, almost everywhere; this is the world now. It's not going to go backward. This project had something to do with that inevitable reality. There's nothing specific I want people to take away, but I'm always curious to know what they took away.

Watch these short documentaries on Pat Perry's experience painting with children in Iraq and Maine.

My Modern Met granted permission to feature photos by One Blue Sky.

Seesaws Installed on U.S.-Mexico Border Wall Allow People on Both Sides to Play Together

Inspired by this project? Share
Like My Modern Met on Facebook
Get Our Weekly Newsletter
Become a
My Modern Met Member
As a member, you'll join us in our effort to support the arts.
Become a Member
Explore member benefits