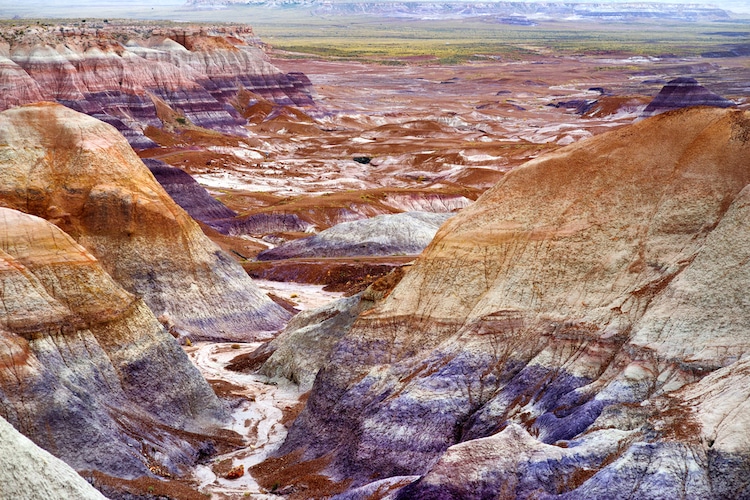 Over 420 national parks dot the United States and show off the incredible natural beauty of the American landscape. And while parks like Arizona's Grand Canyon get a lot of the glory, it's another park in that state that is one of the most unique. The Petrified Forest National Park is a natural wonder containing one of the world's largest collections of petrified wood. With displays of fossils that are 225-million-years old, the park is as fascinating archaeologically as it is aesthetically.

Sprawling across 346 square miles of protected land, the Petrified Forest National Park is nestled in Apache and Navajo counties between Phoenix and Albuquerque. Though humans first inhabited the area over 8,000 years ago, it was later abandoned until Spanish explorers happened upon it in the 16th century. By the 1800s, it had become popular to pilfer petrified wood from the area, which caused Theodore Roosevelt to designate it a national monument in 1908. In 1962, an even larger area was incorporated and it became the national park we know today.

While it's sadly not as visited as some of the country's more famous parks, the Petrified National Forest makes an incredible getaway for those looking to immerse themselves in a largely untouched landscape. 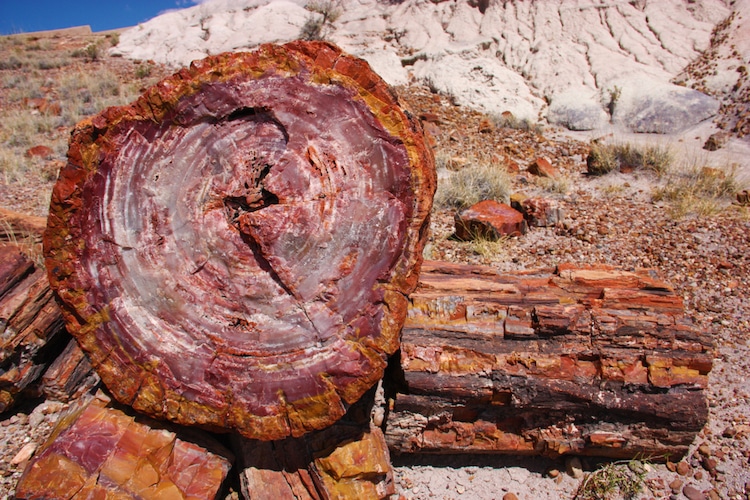 The park takes its name from the incredible petrified trees (from the Late Triassic period) which mark the landscape. The fallen logs have retained their outer appearance but contain a core of colorful quartz crystals. So, just how did these logs become petrified? It took place 225 million years ago; trees that had accumulated in rivers were covered by ash during the period's multitude of volcanic eruptions. Groundwater then mixed with silica and invaded the inner core of the logs, slowly transforming the organic matter into the crystals we now see. And, as the silica mixed with other compounds like iron oxide, the crystals took on different colors.

How long did the petrification process take? As one might imagine, it's not a quick process. It can take millions of years for wood to petrify, which is part of what makes the Petrified Forest National Park so special. Interestingly, some of the logs in the park have retained small bits of their organic matter, with petrified animal bones, leaves, seeds, fish, and insect fossils giving great insight into the prehistoric epoch. 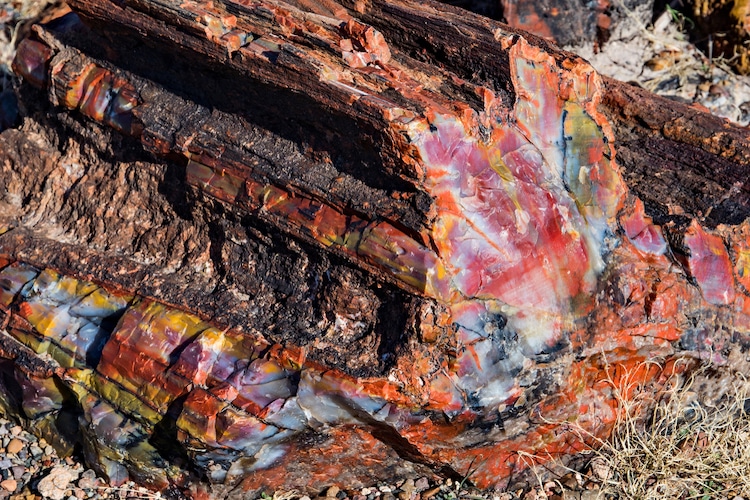 While it may be tempting to want to pocket a piece of petrified wood while visiting, you'll want to think twice. Not only is it illegal to remove anything from a national park, but it's also believed to bring bad luck. An old legend states that starting in the 1930s, people who removed samples of petrified wood from the park were cursed with misfortune. There's even an entire room dedicated to the unluckiness of these thieves at the park's Rainbow Forest Museum. Piles of petrified wood returned by those who lived to regret taking them are a reminder that pilfering the lovely stones can only bring misfortune. 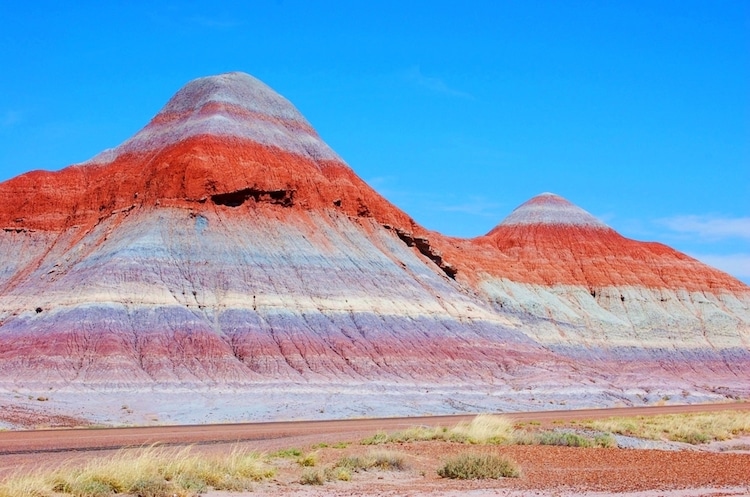 Aside from the petrified wood, the park also contains an array of fossilized trees—including nine extinct species. And the fossils also extend into the Chinle Formation, where the petrified logs are found. This enormous geological formation stretches across five states and is a treasure trove of over 200 types of plant fossils. The rock formation has layers of siltstone, mudstone, and shale filled with compounds that have created brilliant stripes of color. One of the most beloved parts of the Chinle—the Painted Desert—is located within the Petrified Forest National Park.

Spanish conquistador Francisco Vázquez de Coronado is responsible for naming the area during his 1540 quest to find the fable Seven Cities of Gold. After taking in the colorful environment, his team called it El Desierto Pintado—the Painted Desert. The name stuck, with the grey and red bands that fall along the rock formations making this desert incredibly memorable. 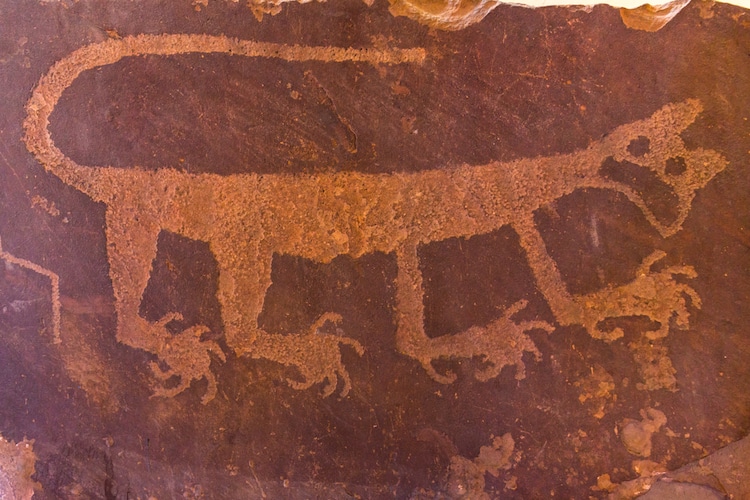 Another highlight of the Petrified Forest National Park is the petroglyphs found at Newspaper Rock. Unlike a similar monument located in Utah, this Newspaper Rock is not just one monument. Rather, this name is used to designate an archeological area where rock faces contain over 650 petroglyphs.

A petroglyph is a type of rock art where the surface of the stone is either carved into or picked away to create drawings that give incredible insight into primitive life. This particular collection of petroglyphs was created by the ancestral Puebloan people living along the Puerco River between 650 and 2,000 years ago. This ancient Native American culture lived in the Four Corners region of the United States and is one of the four major prehistoric traditions of the American Southwest.

The petroglyphs found at Newspaper Rock don't tell one linear story. Rather, they are a collection of imagery that was contributed to by many people over thousands of years. Though their precise meaning is unclear, modern interpretations include spiritual meaning, family symbols, and the commemoration of special events. It's also believed that some petroglyphs are migratory markings or designate boundaries. 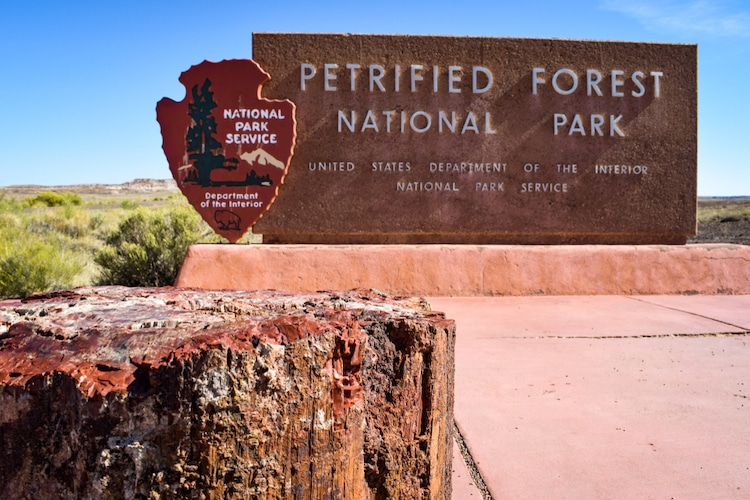 The park is open year-round from 8 AM until 5 PM except on Thanksgiving and Christmas. There are two visitor entrances to the park, one located on Highway 180 South and the other along Interstate 40. The pet-friendly park is filled with hiking trails but can also be explored by car, which makes it perfect for visitors of all abilities.

About 645,000 visitors pass through the park each year to take in the landscape. Whether you have an hour to zip around to the highlights or want to spend a half-day exploring the backcountry, the Petrified National Forest is an excellent way to spend time in nature. 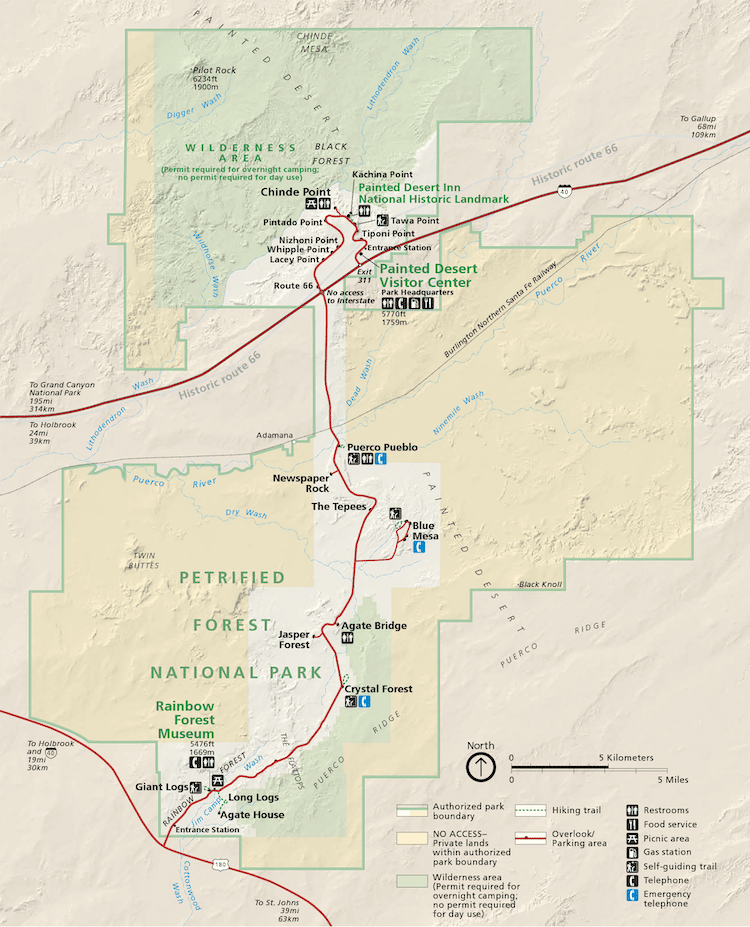