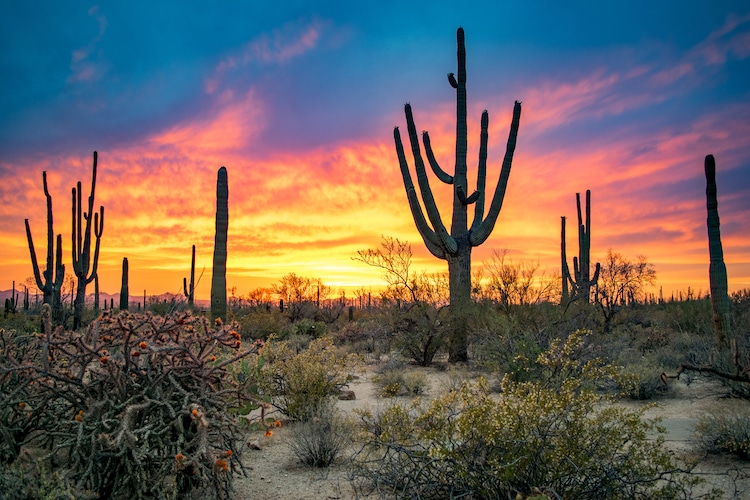 There’s an enthusiastic debate raging among the US National Parks, and for once, the current presidential administration has nothing to do with it. The deeply divided issue? It's not about the budget or park fees; it’s an endearing argument over which park has the prettiest sunset.

The whole thing began, as these things often do, on social media. On May 5th, the Saguaro National Park in southern Arizona shared a photo featuring a gorgeous sunset overlooking a field of cacti. The relatively innocuous caption read, “Did you know @saguaronationalpark has the best sunsets in the world?” Not to be outdone, Joshua Tree National Park in southern California shot back in the comments. “Best sunsets in the world? Lol suuuuure.”

A post shared by Saguaro National Park (@saguaronationalpark) on May 5, 2018 at 4:43pm PDT

Saguaro National Park did not let that dig go unanswered. “We are a little biased but still true,” they replied, “Wanna have a sun-set off?” And with that, #ParkSunsetWars was officially on. Using that hashtag, park guests and rangers are posting their stunning shots of these places at dusk. But it’s not just limited to Joshua Tree and Saguaro—the photos feature national parks from across the US.

A SUNSET OFF? YOU'RE ON @saguaronationalpark. While your sunsets are nice, you might wanna get your facts straight because ours have been putting in work since day one. Check out this #tbt from 2015 (📸 NPS/Brad Sutton: #alttext Joshua trees sillhouetted by sunset background) #parksunsetwars

Although the two desert locales started #ParkSunsetWars, they aren’t the only ones to trade “insults” back and forth. Kenai Fjords National Park in Alaska tweeted, “Oh really? Another hot park wanting to compete with us? We like to keep things cool when viewing our sunsets.” They included a picture of sunlit fog over snow caps. The comment didn’t go unnoticed by Death Valley National Park, one of the hottest places on Earth, who replied, “Beautiful! It must be nice to see a sunset a few times a year for you.” What a sick burn.

Oh really? Another hot park wanting to compete with us? We like to keep things cool when viewing our #sunsets. #parksunsetwars 😀 pic.twitter.com/PGQX989Ol8

This playful banter doesn’t answer who wins this bizarre battle, but that’s okay; we get to enjoy some beautiful views. Does that make us the real winners?

Last for #parksunsetwars is this unbelievable beauty- @whitesandsnps This image is, no joke, straight off the memory card. It really looked like that. It was otherworldly.

Known as #ParkSunsetWars, it has people sharing their favorite sunset photos from the two parks as well as other parks in the National Park system.

While there's no “winner” to this battle, we're the real winners because we get to see these beautiful views!

Sunset over the Great Smokey Mountains🌄