The monarch butterfly is one of the most captivating species on the planet with an unmistakable pattern on its delicate wings. Each winter during the butterflies' life span, a mass migration takes place and brings millions of monarchs to Mexico and California. Unfortunately, some don’t make it all the way, but those who do can relax and regenerate in the warm sun before heading back home in the spring.

Nature host Phil Torres of The Jungle Diaries posed the question, “How many butterflies does it take to make a noise in the woods?” The answer is several million. One dainty butterfly is barely audible; but when a few million flap their wings, they create a magnificent sound. He captured footage of a swarm of butterflies in a Mexican forest as they gathered in clusters on trees and covered entire branches and leaves.

As the sun warms up the insects, the multicolored creatures take flight all at once. Torres’ calls this collective movement a “waterfall,” as their wings flap together to mimic a soothing sound similar to that of falling water. 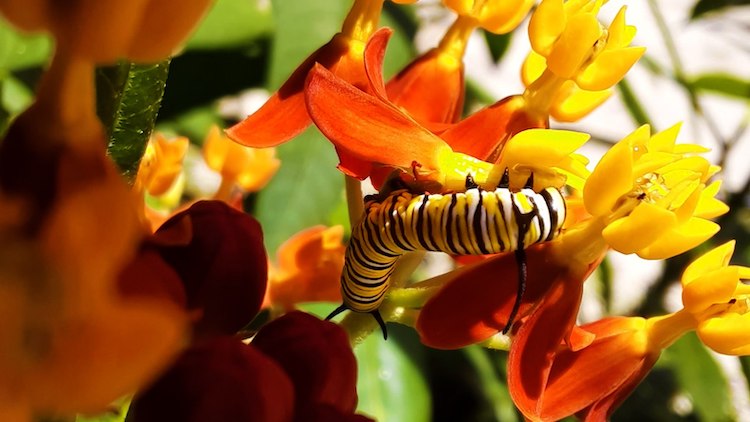 The monarch butterfly is an endangered species as the population continues to decline—down 26% from last year’s count. Monarchs are threatened by pesticides, climate change, urban sprawl, and illegal logging of the forests where they migrate for the winter. The monarch butterfly caterpillars only eat milkweed, but the plant has been devastated by increased herbicide spraying and other chemicals toxic to the young caterpillars. If you want to help protect this magnificent insect, you can plant native milkweed and wildflowers, which is their preferred habitat.

Ready to hear “one of the rarest sounds on Earth?” Watch the video below and then check out Torres' YouTube channel for more nature-inspired footage.

Watch (and listen closely) as these monarch butterflies take flight!

Magical Crowns Made of Butterflies Playfully Fluttering Around Your Head

A Room Filled with Hundreds of Paper Butterflies