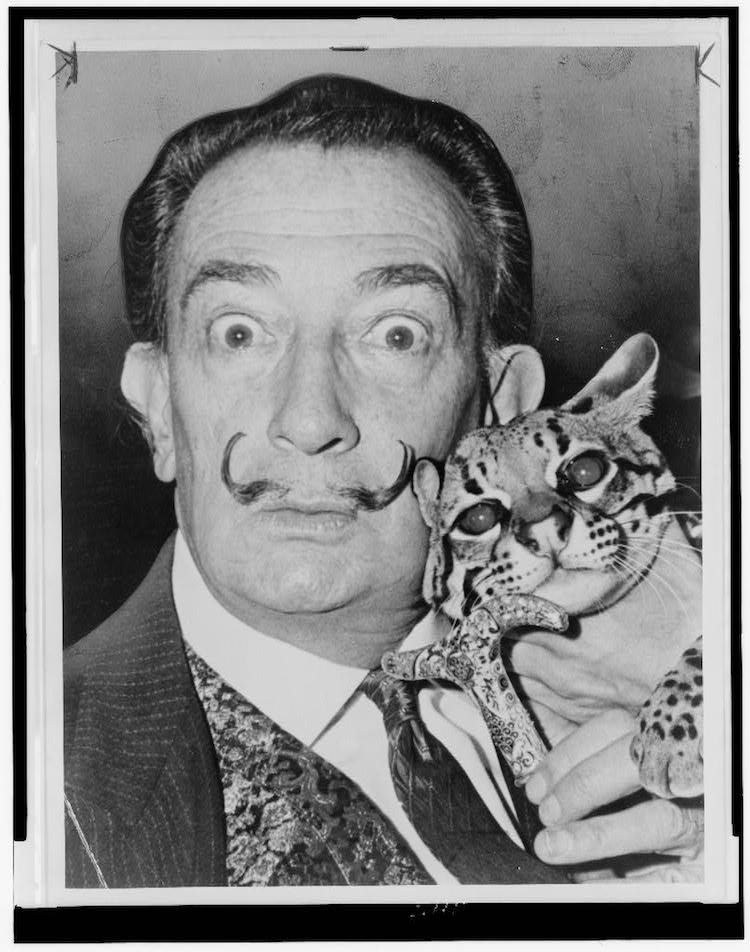 With a career that spanned more than six decades, Salvador Dalí is undoubtedly one of the most influential figures in modern art. Upon his death in 1989, he'd created an astonishing legacy that not only includes his most famous Surrealist paintings, but sculpture, film, photography, and much more.

As an eccentric figure from childhood, Dalí loved to push the boundaries—both in his personal and professional life. And he was also a hustler and master of self-promotion. Let's look at just some of the interesting facts about Dalí's life, some of which may surprise you. 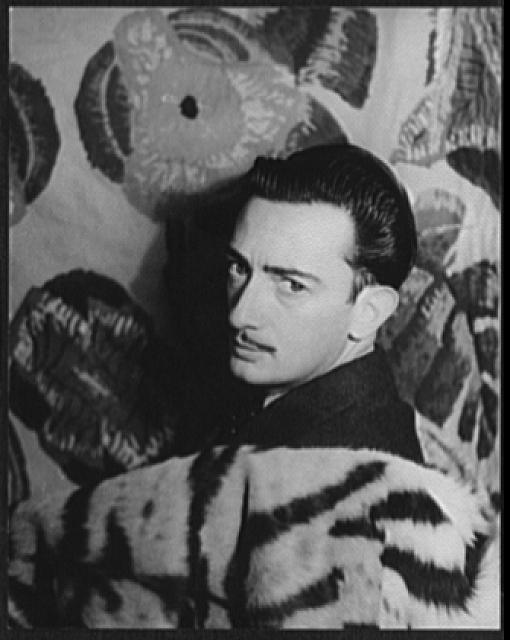 Here are 15 facts about Salvador Dalí, the eccentric master of Surrealism, that you may not know.

1. He believed he was a reincarnation of his dead brother.

Dalí wasn't the only Salvador in his family. Not only was his father named Salvador, but so was his older brother. Dalí's brother died just nine months before the artist was born. When the famed artist was 5 years old, his parents took him to his brother's grave and told him that he was his brother's reincarnation. It was a concept that Dalí himself believed, calling his deceased sibling “a first version of myself but conceived too much in the absolute.” His older brother would become prominent in Dalí's later work, like the 1963 Portrait of My Dead Brother.

2. He started painting as a young child.

Dalí’s earliest known painting was produced in 1910 when he was just 6 years old. Titled Landscape of Figueres, the oil-on-postcard scene depicts the lush green hills and mountainous backdrop of his Catalonia hometown, Figueres. The impressive piece reveals the iconic artist’s incredible, natural-born talent at such a young age. It now hangs in the Salvador Dalí Museum in St. Petersburg, Florida.

3. He was expelled from art school (twice).

Proving that he was a rebel from the start, Dalí was expelled from art school—not once, but twice. Young Dalí's artistic talent was fostered from a young age, particularly by his mother, who passed away when he was just 16 years old. While studying at the Fine Arts Academy in Madrid, he was known for his eccentric behavior and dress, which was that of a 19th-century British dandy. Unfortunately, Dalí never graduated. His first expulsion came in 1923, for his role in a student protest. After returning to the school, he faced a second expulsion just before his final exams in 1926.

In his 1942 autobiography The Secret Life of Salvador Dalí, that artist wrote that he was expelled because he wouldn't sit for his oral exams. “I am infinitely more intelligent than these three professors, and I therefore refuse to be examined by them. I know this subject much too well.” But the expulsion didn't slow him down, that same year he traveled to Paris for the first time and met his idol, Pablo Picasso. 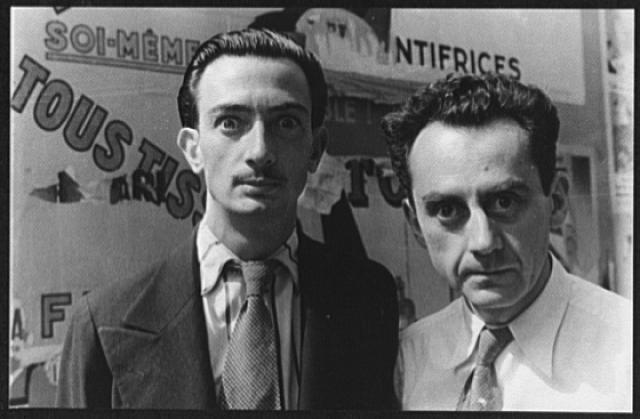 While Dalí's surreal artwork and eccentric behavior may have you think otherwise, the artist did not use any chemical substances to alter his state. In fact, he once famously stated, “I don't do drugs, I am drugs.” To spur his creativity, in the early 1930s he developed something called the paranoiac-critical method. This allowed him to access his subconscious and was a major contribution to the Surrealist movement. One way he kept himself in a dreamlike state included staring fixedly at a particular object until it transformed into another form, sparking a sort of hallucination.

5. Surrealists weren’t pleased with him.

Though Dalí is considered a key figure in the Surrealist movement, the group wasn't happy to have him early in his career. Many in the group were communist and weren't pleased with Dalí's fascist sympathies. The artist had a fascination with Hitler that the Surrealists found unsettling. He once said, “I often dreamed about Hitler as other men dreamed about women” and even went as far as to include Hitler in his artwork. This includes 1958's Metamorphosis of Hitler’s Face into a Moonlit Landscape with Accompaniment, where the Nazi leader's portrait is disguised in a landscape.

Over twenty years earlier, in 1934, André Breton would call a meeting to try and have Dalí expelled from the Surrealist group, writing “Dalí having been found guilty on several occasions of counterrevolutionary actions involving the glorification of Hitlerian fascism, the undersigned propose that he be excluded from surrealism as a fascist element and combated by all available means.” Of course, Dalí continued with his own beliefs, even supporting Spanish dictator Francisco Franco, whom he met with several times. 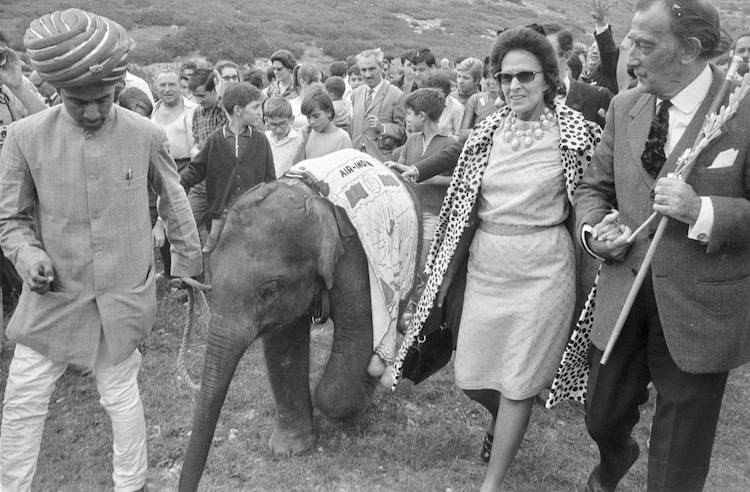 Dalí and Gala receiving an elephant, which was a gift from Air Bus airlines, 1967. (Photo: Ajuntament de Girona)

6. He had an unconventional marriage.

Elena Ivanovna Diakonova, known as Gala, was ten years older than Dalí and married to Surrealist poet Paul Éluard when she first met him in 1929. A love affair quickly developed, with Gala eventually divorcing Éluard—though they remained close. The couple married in a civil ceremony in 1934, despite Dalí's family's unease with him marrying an older Russian divorcee. She had a pivotal role in the artist's career, becoming his business manager and muse.

By the 1950s, Gala was publicly engaged in extramarital affairs, though it's said that Dalí encouraged this. And in 1969, when Dalí purchased her a Catalan castle in Púbol, it was specified that he could visit her there only if invited in writing. Throughout their lives, there's no doubt they shared an intense and cerebral love. He wrote, “I would polish Gala to make her shine, make her the happiest possible, caring for her more than myself, because without her, it would all end.”

Always up for a prank, some consider Dalí a bit of a con man. Close friend and muse Amanda Lear recalls how he once duped Yoko Ono, selling her a blade of grass for $10,000. Apparently, Ono had asked Dalí to sell him a strand of hair from his infamous mustache. Not one to turn down a check, he got creative.

“Dali thought that Yoko Ono was a witch and might use it in a spell. He didn't want to send her a personal item, much less one of his hairs,” Lear explained. “So he sent me to the garden to find a dry blade of grass, and sent it off in a nice presentation box. The idiot paid 10,000 dollars for it. It amused him to rip people off.”

8. He collaborated with Disney.

In 1946, Salvador Dalí and Disney designer John Hench worked on an animated film together called Destino. Dalí created 22 oil paintings and countless drawings that Hench then turned into film storyboards. However, just 8 months in, the work stopped due to financial reasons and the film was left unfinished, with only 15 seconds of demo reel completed.

In 1999, Walt Disney’s nephew and longtime senior executive for The Walt Disney Company, Roy E. Disney, decided to revive the production of Destino. The finished, 6-minute short was released in 2003 and tells the story of a ballerina on a surreal journey through a desert landscape.

9. He designed the Chupa Chups logo.

Dalí had no issue participating in commercial work. He designed ads for Gap and even appeared in a commercial for Lanvin chocolates in 1968. In fact, André Breton, the father of Surrealism, gave him the nickname “Avida Dollars” or “eager for dollars.” But one of his most enduring contributions to graphic design is the Chupa Chups logo. Dalí designed the logo for the Spanish lollipop brand in 1969, and it is still used today.

Want to learn more about Salvador Dalí? Read more on the next page.