Artist Rob Tarbell mounts paper to the ceiling and then burns everyday objects like credit cards and photos to create his mesmerizing smoke art. The paper captures his desired images, in this case, circus horses, elephants and zebras, in a series he calls Smoke Rings. The performing animals appear almost ghost-like, their wildness tamed. Taken out of their natural habitat and trained to jump through hoops or balance on platforms, they're similar to the smoke that has been controlled by the artist to create these stunning images.

“The performing animal images in the Smokes parallel the drawing process,” Tarbell says on his website. “The trainer must recognize and respect the innate nature of an animal when trying to modify its behavior to achieve a desired outcome: e.g. training a bear to dance or training a horse to walk upright. The same is true in working with smoke. The inherent properties of smoke must be respected, then permitted to – and yet discouraged from – acting naturally.”

Update: We got in touch with the artist and was able to ask him a few questions about his creative process. Read that short Q&A, below. 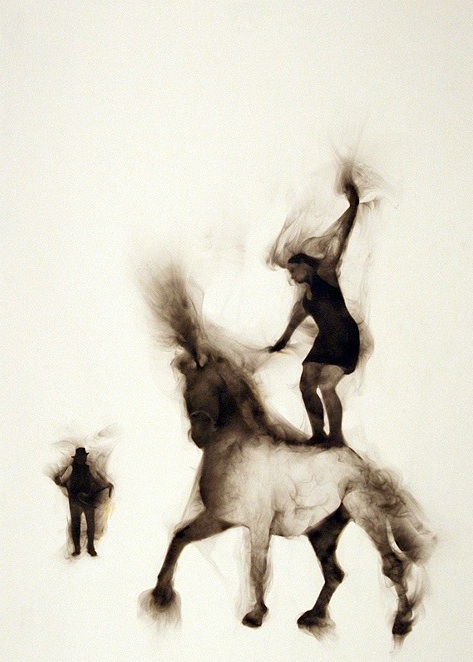 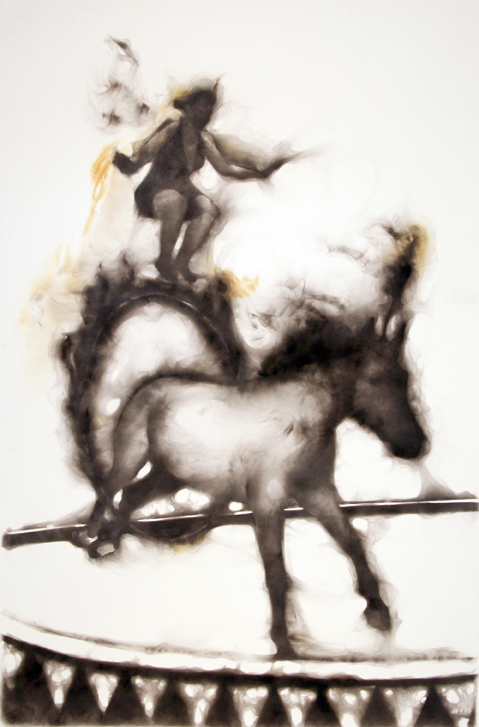 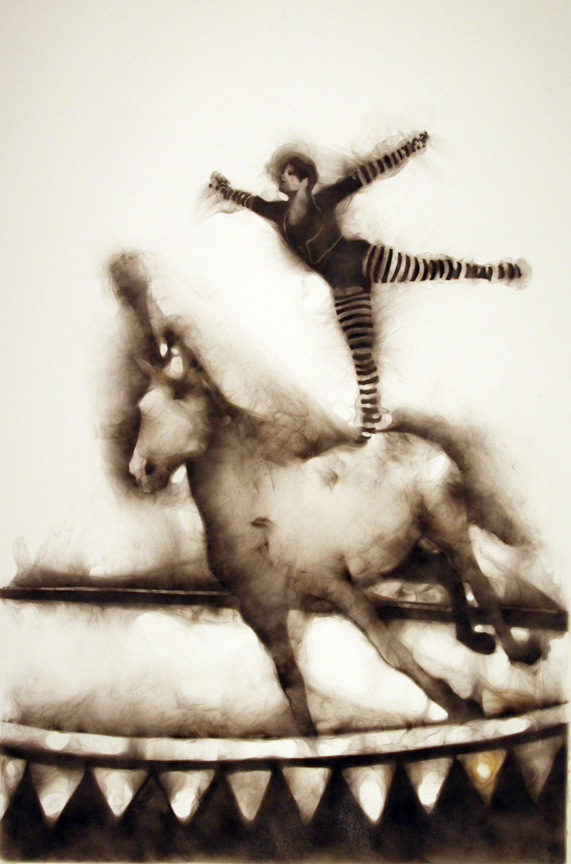 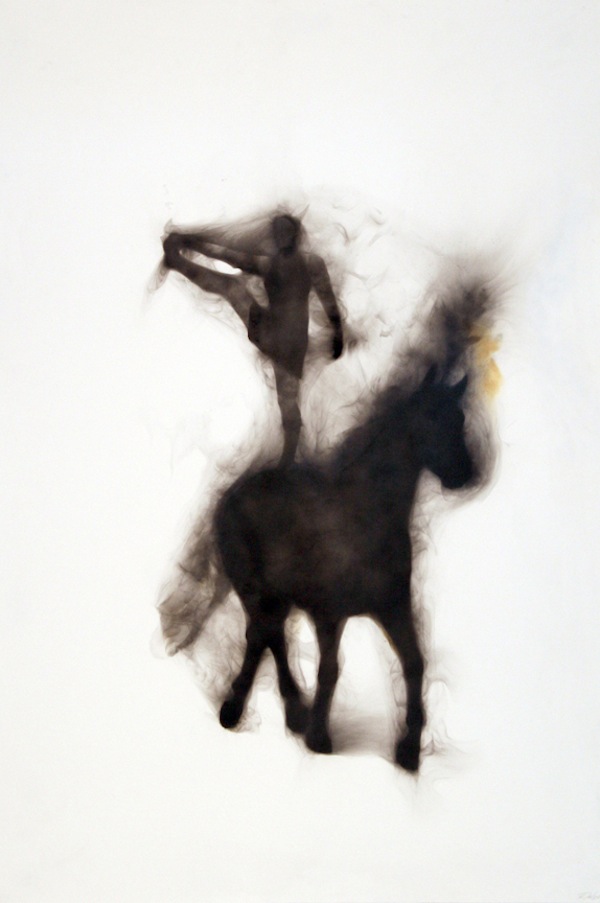 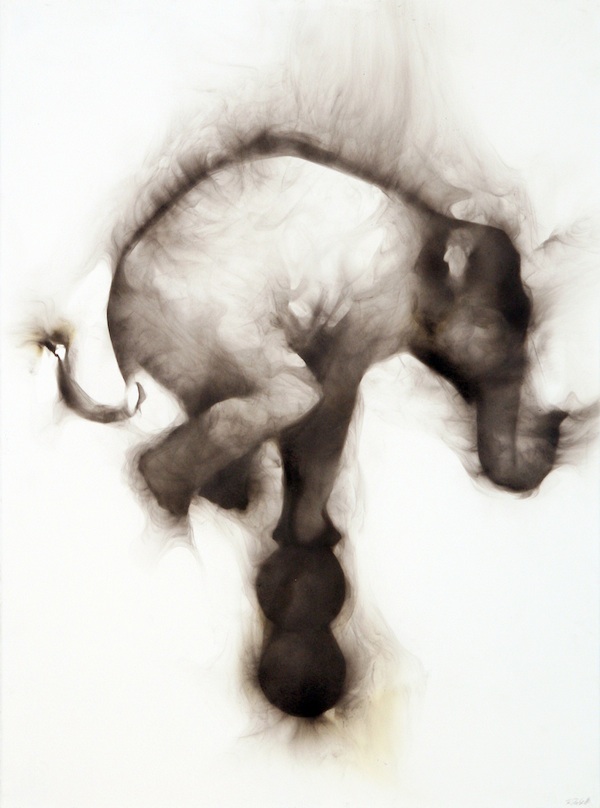 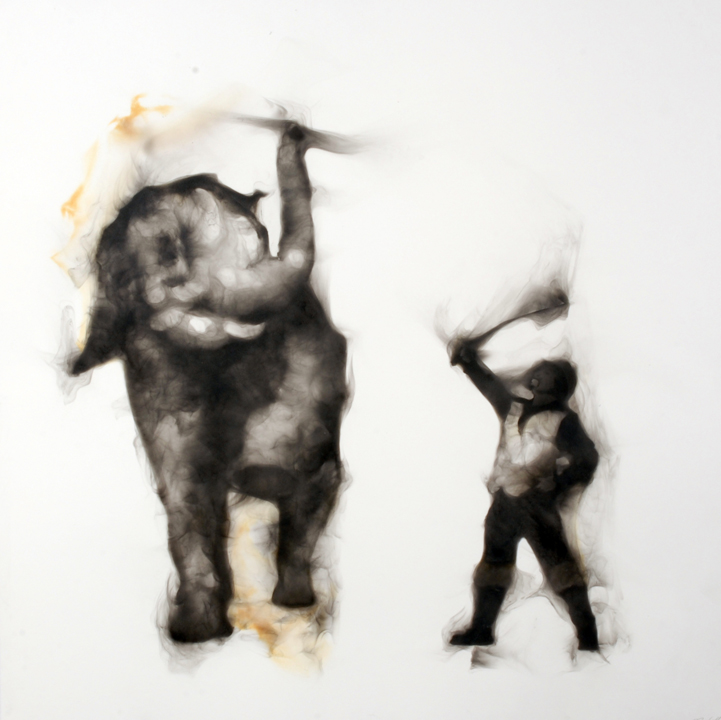 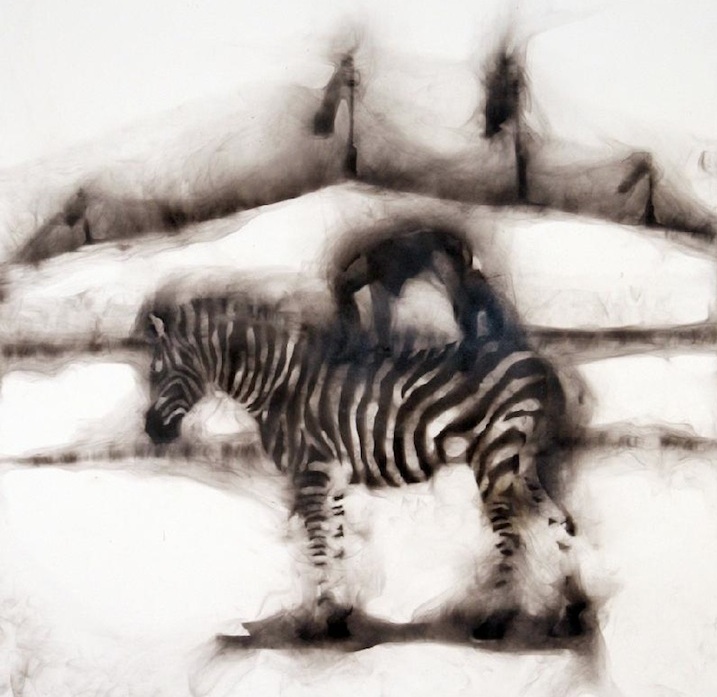 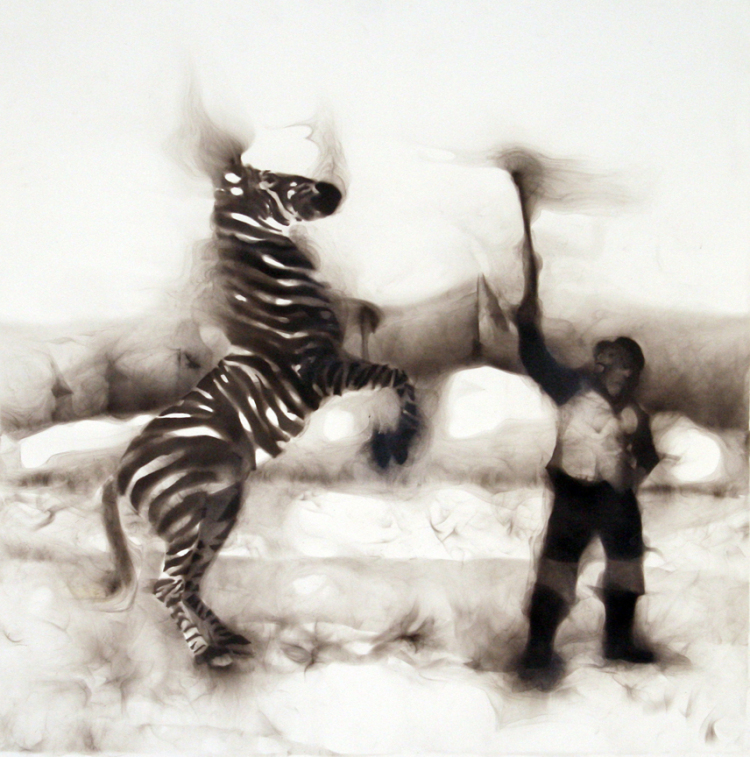 Q: How long have you been creating smoke art?
A: I began tinkering with it in late 2007, but it took a few months where I was really getting somewhere with it, but not without a lot of trial and error.

Q: What's the greatest challenge when working with smoke?
A: Fire? I took the safety concerns pretty seriously. I started these in a metal garage, but still kept two fire extinguishers close by. I also invested in fire retardant clothing, a carbon filter unit, a fresh air system with full facial mask. Later on we had a special room built on to our house to keep it all isolated.

Beyond the safety concerns, I try to only capture the smoke on the surface of the paper, not burn the paper. You can see certain places where there are accidental burns, but I don't want to burn, just capture.

I also hope to make an interesting image within the process constraints I set up originally – working with smoke as an additive process only. No erasing. I still stick to that. Now I don't try to get the whole piece done in one shot, I did that and it was pretty harrowing at first. One false move and the whole piece is trashed. Now I am able to go back into a piece without it showing at all. But it is pretty exciting to get something great in one shot. I just don't bank on it.

Q: What did you destroy/burn for the Smoke Rings set?
A: I started the early ones by burning credit cards, bonus or membership cards. For the Smoke Rings work, I burned a lot of 35mm slides of my past work & some credit cards. Most recently I was burning 35mm slides from a collection of art history classes. My work is informed by art history, my past work and money. Or debt. However you want to look at it.

Q: Why did you create the Smoke Rings set?
A: I was working off the premise of controlling the smoke, which turned into trying to get it to do what I want it to do while still doing what it naturally does. That sounded a lot like training an animal so I went towards that type imagery – bears dancing, zebras or elephants doing tricks. As my control got better, I tried more elaborate images and was pushing the technique to show more realistic values, which felt like the balancing acts or more elaborate tricks with an animal trainer and an animal performing – a direct parallel to how I was making them and how the smoke would act. The more I explained how I did this, the more people keyed in on the performative imagery of me creating them in my studio – so the trainer or ring leader took more prominence. I ran with performance and tricks metaphor, adding some corn and a little cheese.

The imagery is all faked. It's a combination of images I took – the zebras are horses from around my home, but elephants are combined from a variety of sources. The figures are all friends doing yoga or cheerleading poses, or acting silly. Most images came out pretty convincingly. At the opening in Baltimore, a woman introduced herself as being a long time manager of a traveling circus and wanted to know all about these images – who they were, which circus. She gave her approval of the action, but seemed a little disappointed that they were my wife in yoga pants collaged over a retired racehorse. Which hinted at the trick aspect of the smoke, only more towards the being tricked. That shows up in later work using smoke.

Thanks for the interview, Rob! Wonderful work.