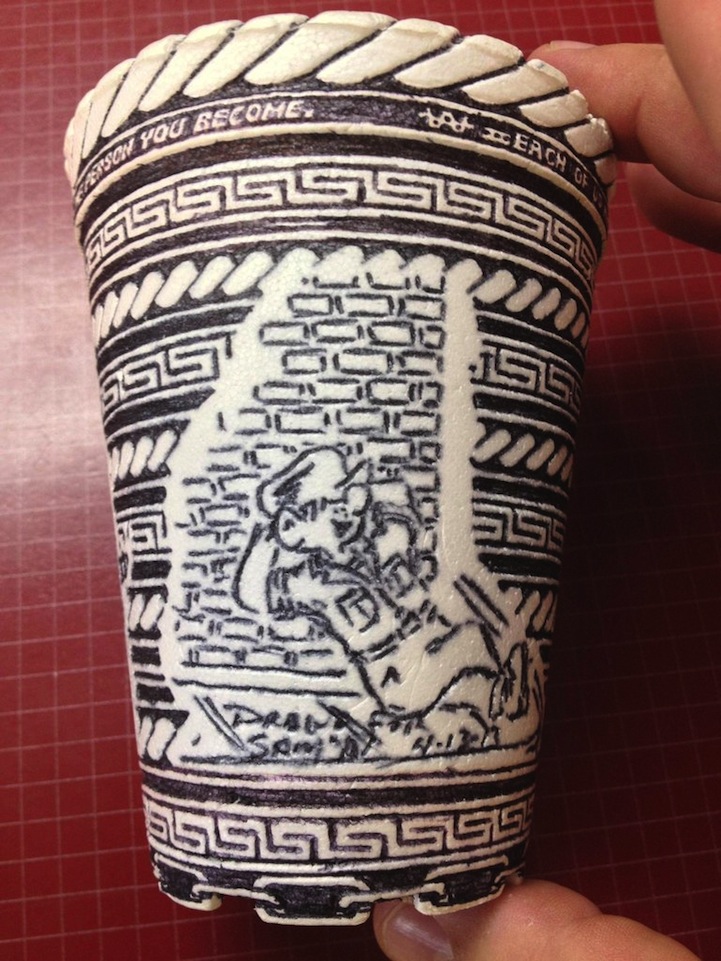 On a routine visit to his car dealership in Norman, Oklahoma, Redditor SquishyMcPhee came across a styrofoam cup that had been left behind by a former customer, but he immediately knew that it was no ordinary cup. The tiny container was covered in intricately crafted doodles with a simple ballpoint pen. Every inch of the cup is meticulously designed with patterns, text, and characters, as though it were a premeditated execution.

While the artist remains unknown, SquishyMcPhee was able to learn a bit about him from the cashier who described him as a young man that had come in to get work done on his car. The job would take about three hours and so the anonymous artist resolved to doodle on a nearby coffee cup. Astonished by the skilled handiwork, especially taken aback by the impressive amount of detail administered inside the cup, the Redditor questioned the cashier further and says, “She said that he didn't even seem that intent on it, just had his feet up most of the time. He'd doodle, pitch it down and go get a drink, doodle some more, walk around the showroom for a while…”

The creatively crafted styrofoam cup includes classic cartoon characters like The Simpsons, Smurfs, Dilbert, and Beetle Bailey. As though the characters themselves weren't enough, there's an intricate display of patterns, including chain links, that make their way around the cup perfectly. Each row of designs is remarkably even and complete. Additionally, the unidentified illustrator includes little messages etched into the details.

On the outside rim of the cup, it reads: “Each of us has choices to make each day. What you choose determines your future and the person you become.” On the inner rim: “If you look deep within a piece of art you will find a piece of its creator.” And, on the bottom, inside the cup: “Smile – It's easy ‘N' it's free” 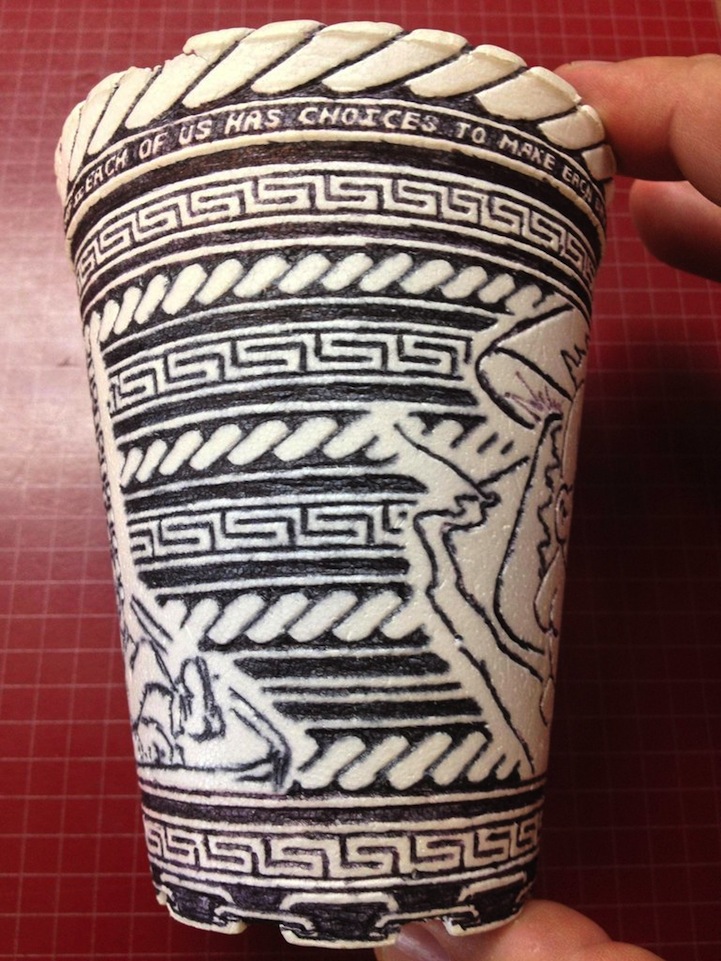 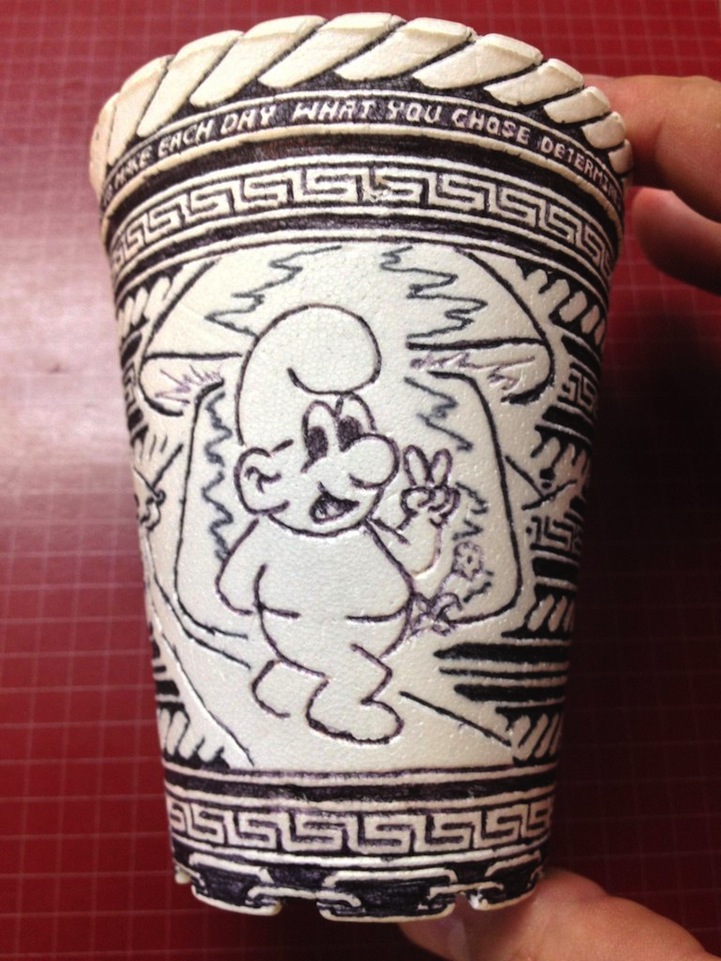 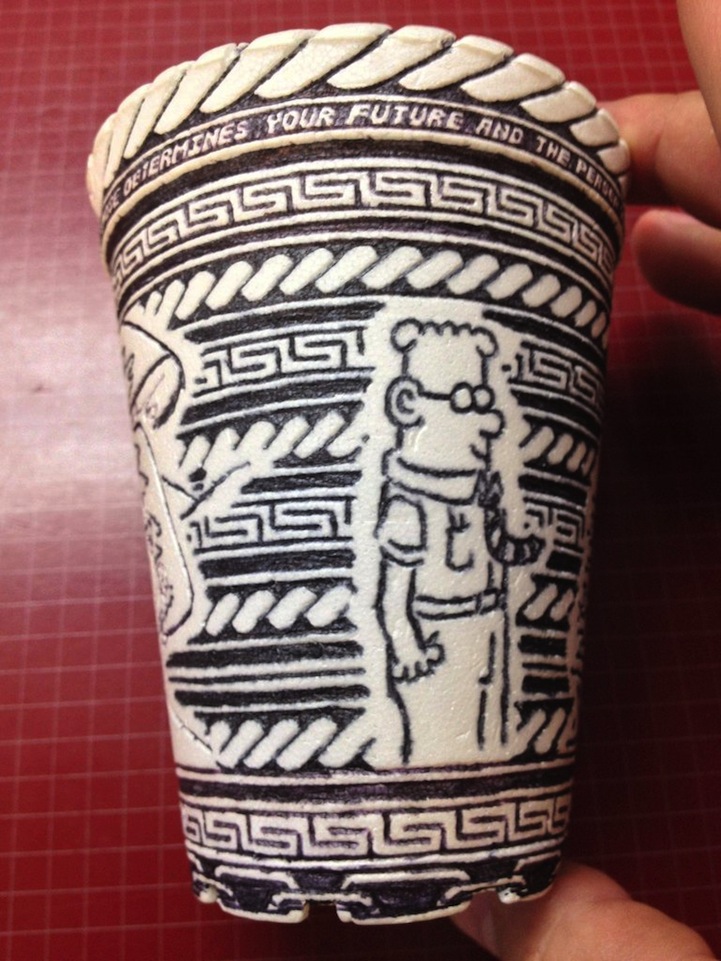 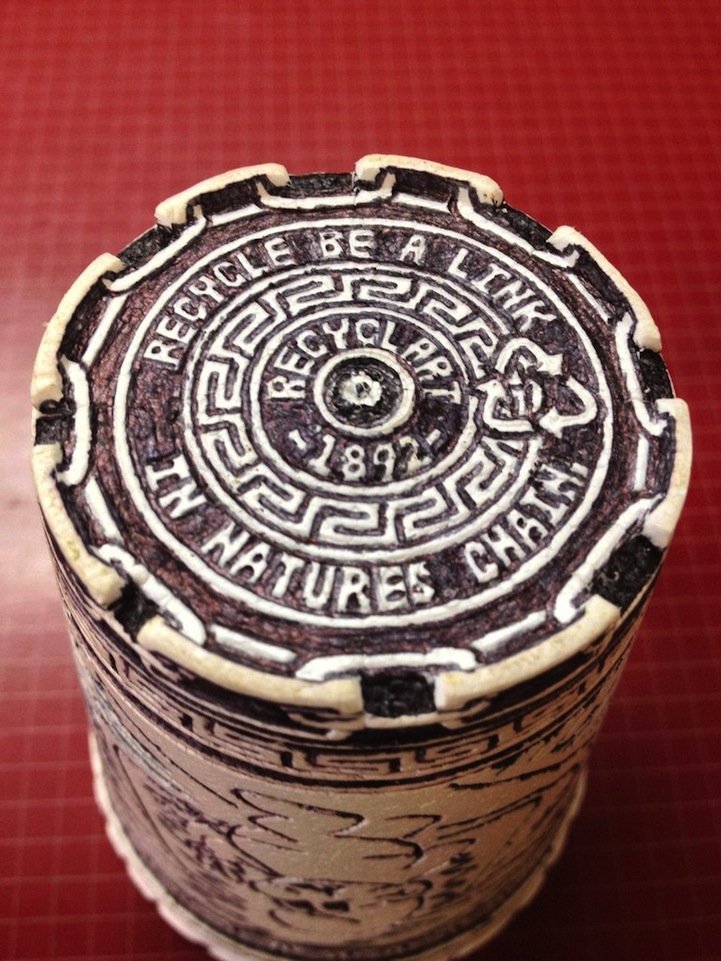 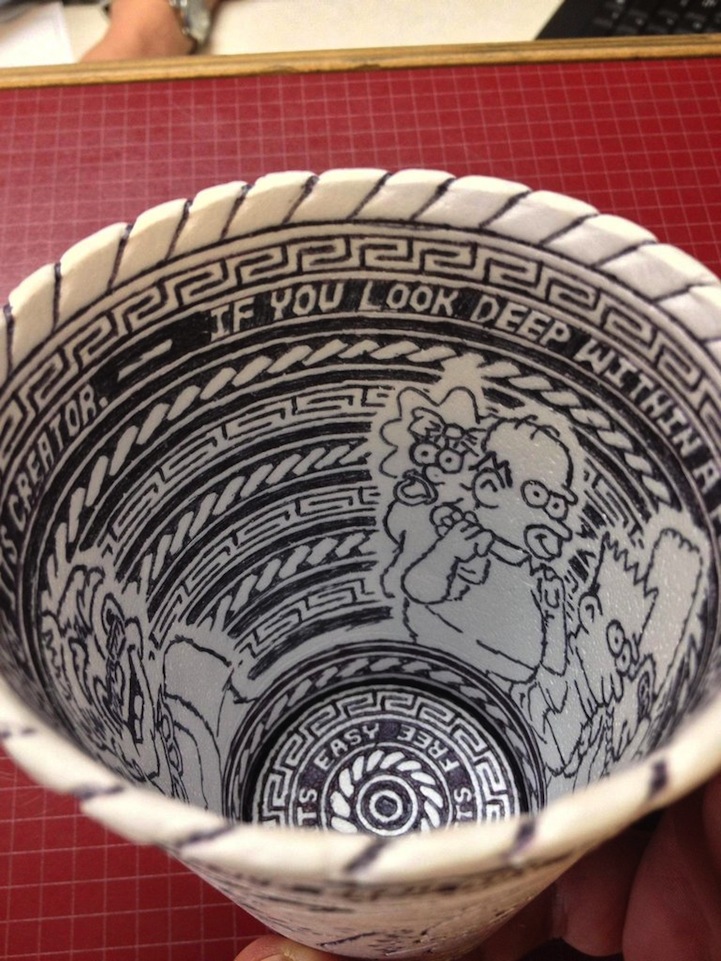 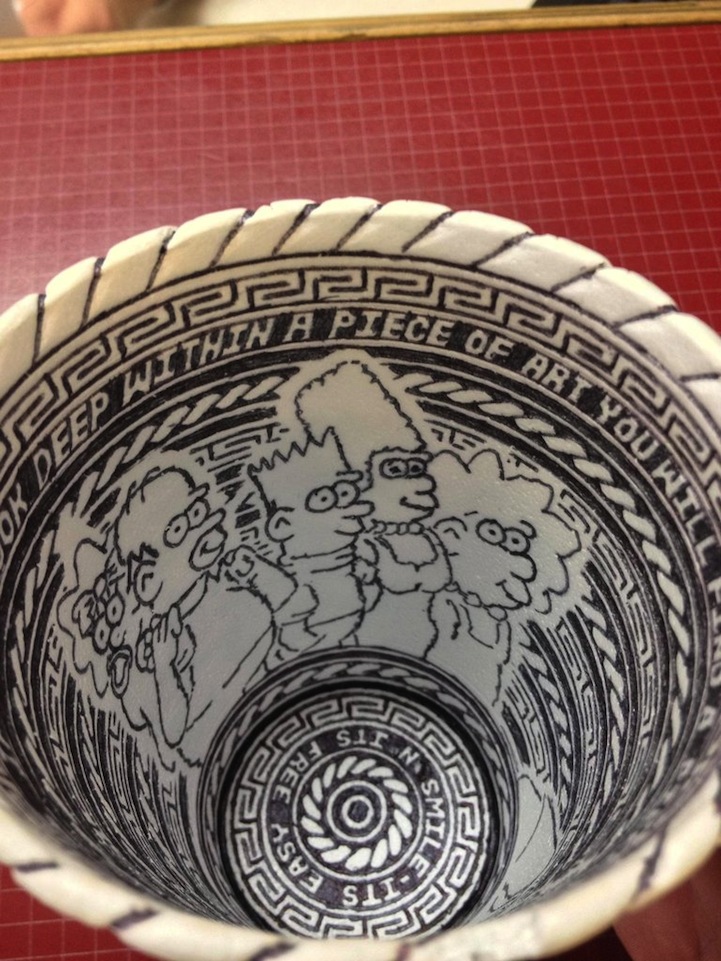 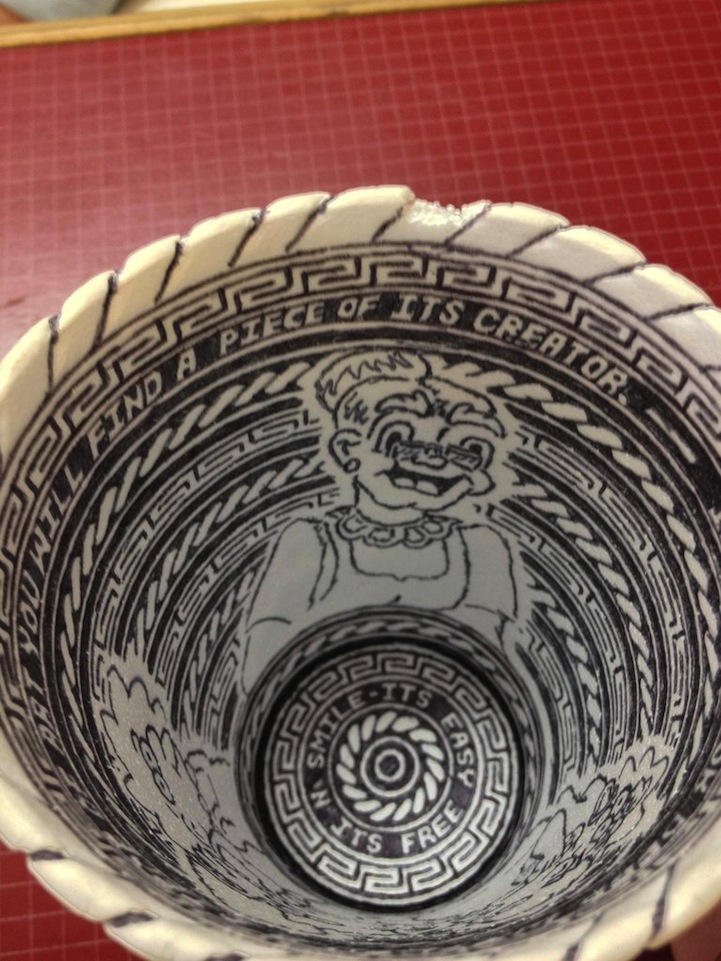 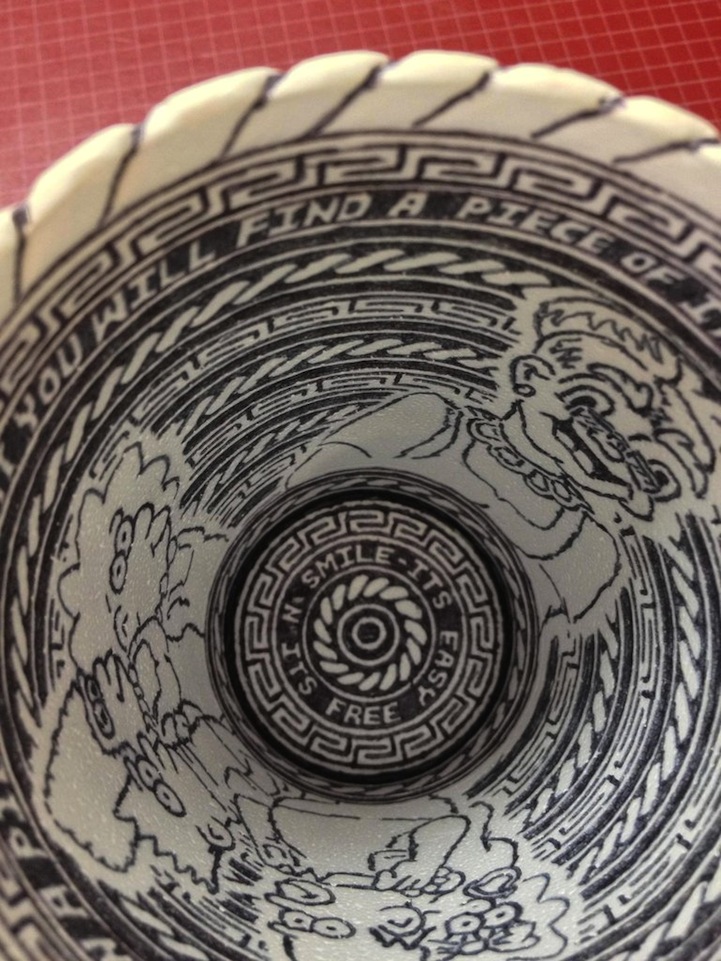