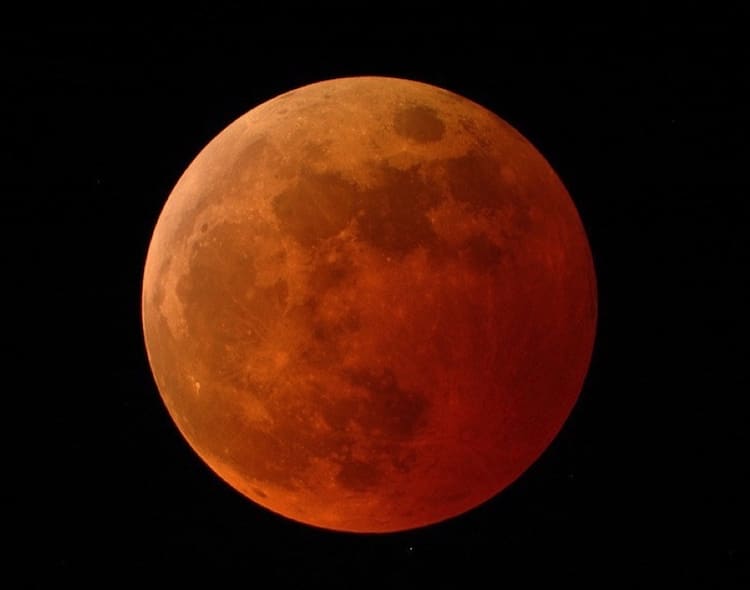 The past few years have been rich with lunar and solar events. From the 2017 solar eclipse to the 2018 supermoon trilogy, astronomy lovers have been privileged to witness a number of rare occurrences. Now, another spectacular lunar moment is on the horizon, with a super blood moon set to appear on January 21, 2019.

The phenomenon, which occurs when a total lunar eclipse happens as the Moon is at its closest point to the Earth, won't appear again until 2036. While 87 lunar eclipses have occurred this century, only 28 coincide with supermoons, making the super blood moon a rare treat. As opposed to solar eclipses, it's perfectly safe to observe lunar eclipses without the aid of special equipment, making it an event that's easy to take in if you get the timing right.

Why is the super blood moon red? Anna Ross, an astronomer at the Royal Observatory Greenwich in London, shares the science behind the color with Newsweek: “As the light from the sun hits the Earth, most of it is just directly blocked to create a shadow. However, some light is refracted through the Earth's atmosphere and bent around to still hit the moon's surface. When light is passed through a glass prism it is split into a rainbow of colors depending on the angle it has been bent by. Light from the sun passing through our atmosphere does the same thing, so when the sun is high in the sky we see blue, when it is lower (or the light is passing through at a shallower angle) we see the reds of sunset and sunrise. When the light is passing through to the moon during an eclipse, it is a similar shallow angle so we see reds too.”

Ross notes that the intensity of the red depends on the amount of dust in the atmosphere, which is why not every eclipse takes on this color. The full eclipse should be visible in most of North America, South America, and parts of western and northern Europe. NASA's eclipse website will help you make precise plans for your viewing party, and if you create your own DIY Moon Phase Calendar—which NASA recently updated for 2019—you'll always be in the know for future events.

Watch NASA's timelapse of the 2018 Super Blue Blood Moon to get an idea of what we're in store for.