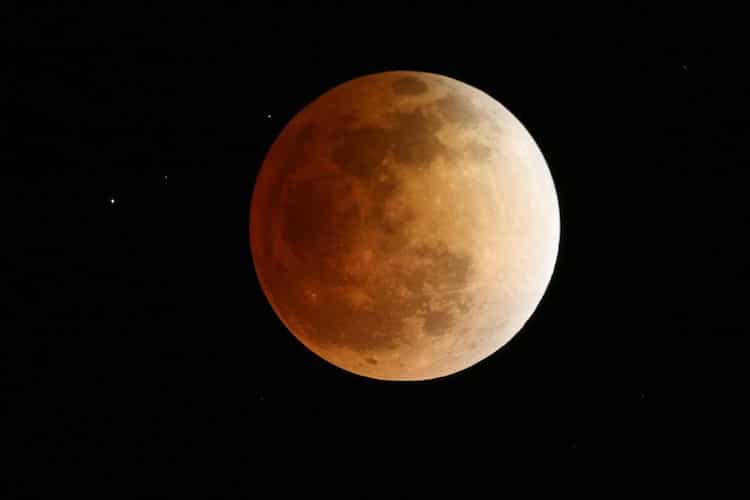 In 2017, we were treated to a total solar eclipse and now, get ready for another rare celestial event when, for the first time in 150 years, a total lunar eclipse will occur during a blue moon. It's the grand finale of a trilogy of supermoons that have been taking place since early December.

So just what are we in store for on January 31, 2018, when the eclipse will take place? In order to understand the significance, we first need to take apart the different phenomena that will align in the sky. A supermoon is a full moon that occurs when the Moon is at its closest point of orbit around the Earth. December 3 was the first in a series of three supermoons, and was the only one of 2017. Due to their relatively close position to Earth, supermoons appear 14% bigger and 30% brighter than regular full moons.

But we're not just talking about a supermoon here. The January 31 supermoon will have a total lunar eclipse visible over western North America and Eastern Asia. According to NASA, “the Moon will lose its brightness and take on an eerie, fainter-than-normal glow from the scant sunlight that makes its way through Earth's atmosphere. Often cast in a reddish hue because of the way the atmosphere bends the light, totally eclipsed Moons are sometimes called ‘blood Moons.'”

If that wasn't interesting enough, the stars have aligned to stack one more unique feature—a blue moon. Having nothing to do with the Moon's color, a blue moon is defined as a second full moon in the same calendar month (the January 31 moon follows the supermoon of January 1). And now you can see why the January 31 event is so unique, stacking three rare occurrences together. In fact, you can call it a super blue blood moon.

On average, blue moons appear once every two and a half years, and while they occur much more frequently than a total solar eclipse, the last time a super blue blood moon took place was in 1866. So where do you have to be to see the special event? In North America, Hawaii and Alaska will get the best views. “The lunar eclipse on January 31 will be visible during moonset. Folks in the Eastern United States, where the eclipse will be partial, will have to get up in the morning to see it,” explains Noah Petro, a research scientist from NASA’s Goddard Space Flight Center. “But it's another great chance to watch the Moon.”