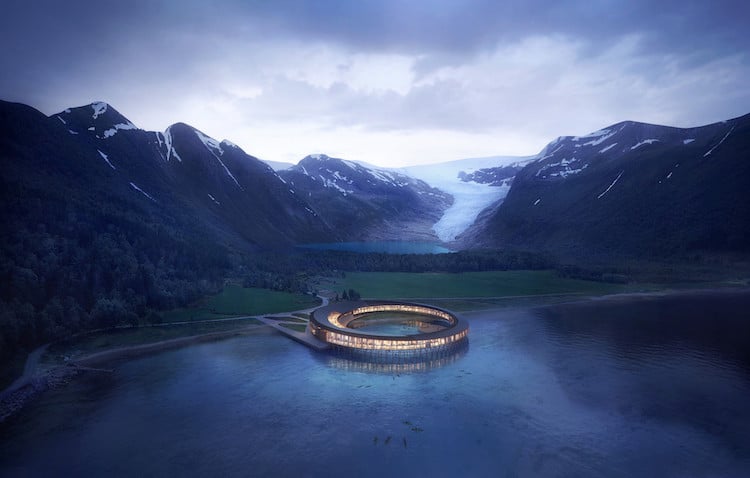 Norwegian architecture and design firm Snøhetta has been commissioned to create a sustainable hotel at the foot of a glacier located just above the Arctic Circle. Building in such an environmentally fragile location has called for innovative solutions and Snøhetta has delivered in a big way through their design.

Svart will be the world's first Powerhouse hotel, meaning that it will generate more energy than it consumes. Named after the Svartisen glacier in northern Norway, Svart will have an energy consumption rate that is 85% less than standard hotels. All of this is possible through careful research and design on the part of Snøhetta.

“Building in such a precious environment comes with some clear obligations in terms of preserving the natural beauty and the fauna and flora of the site,” shares Snøhetta's Founding Partner Kjetil Trædal Thorsen. “It was important for us to design a sustainable building that will leave a minimal environmental footprint on this beautiful Northern nature.” 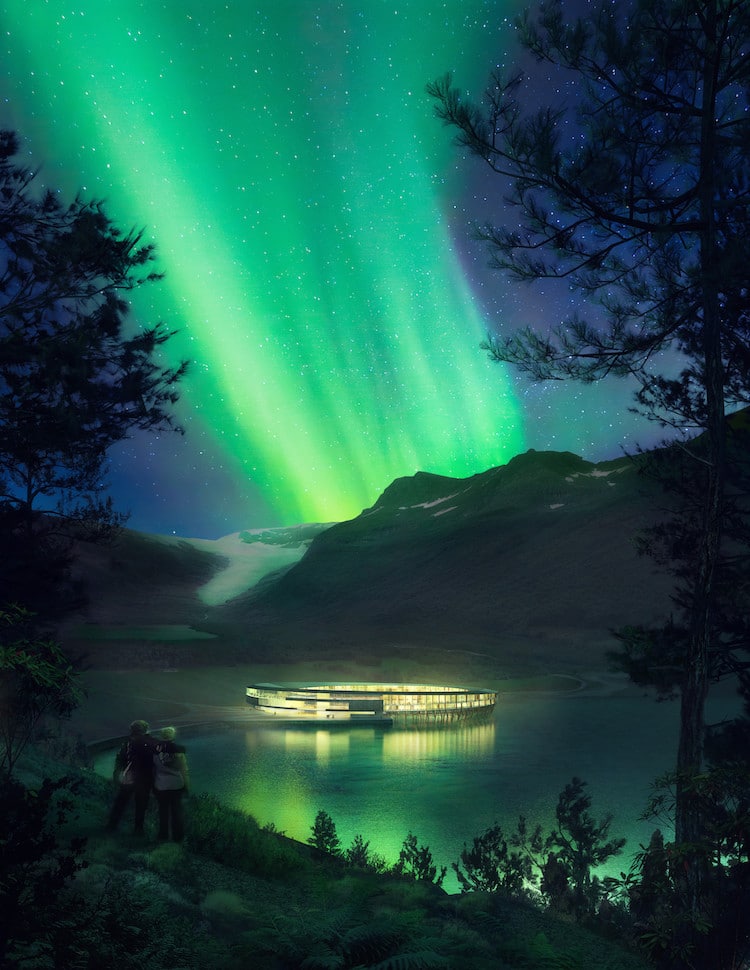 Svart juts out into the waters of the Holandsfjorden fjord, its circular shape affording panoramic views of the landscape. Its construction, though contemporary, is based in local tradition. The worn wood that forms the structure's frame and support poles was inspired by the rorbue—a traditional seasonal house used by local fishermen. Additionally, the A-shaped beams that plunge into the Arctic waters recall the forms of a fiskehjell, a wooden structure used to dry fish.

Furthering the goal to make Svart a pioneering structure in sustainable tourism, the hotel can only be accessed by boat. Currently, there are plans to introduce a neutral energy boat shuttle from the city of Bodø. Solar panels laid across the hotel's rooftop were aligned with the sun's rays in order to create optimal energy generation. Geothermal wells will capture ground energy for heating and all the rooms, terraces, and the restaurant have been strategically positioned to take advantage of shade during the summer months.

The facade's large windows give an illusion of transparency while also allowing plenty of natural light to filter into the space—a concept that is key above the Arctic Circle. Scheduled to open in 2021, the Svart is just the first of many Powerhouse buildings Snøhetta is looking to construct together with partners Arctic Adventure, Asplan Vaak, and Skanska.

Svart is a sustainable hotel located above the Arctic Circle that generates more energy than it consumes. 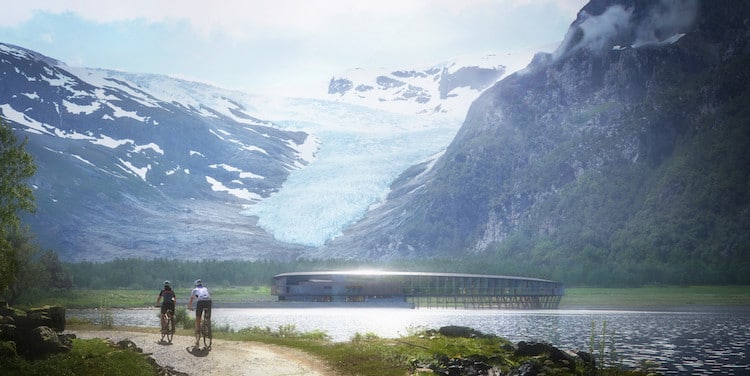 Snøhetta, an architecture firm known for their green buildings, was inspired by traditional shapes and construction features. 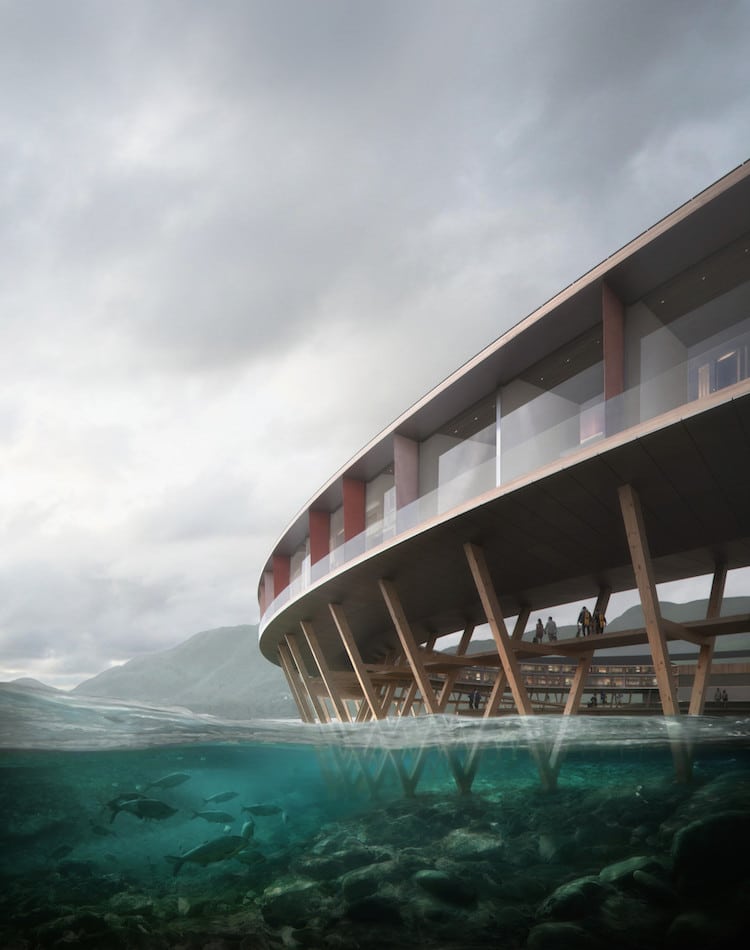 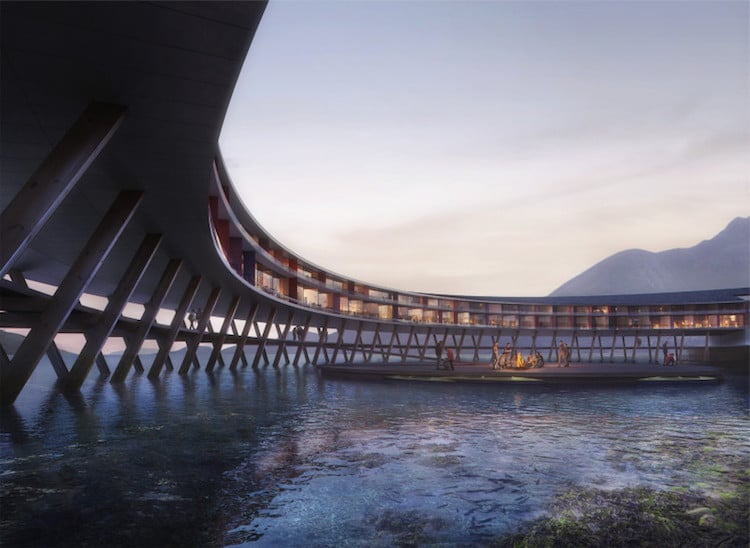 Floating Cabin Lets Nature-Lovers Sleep in the Treetops of Sweden