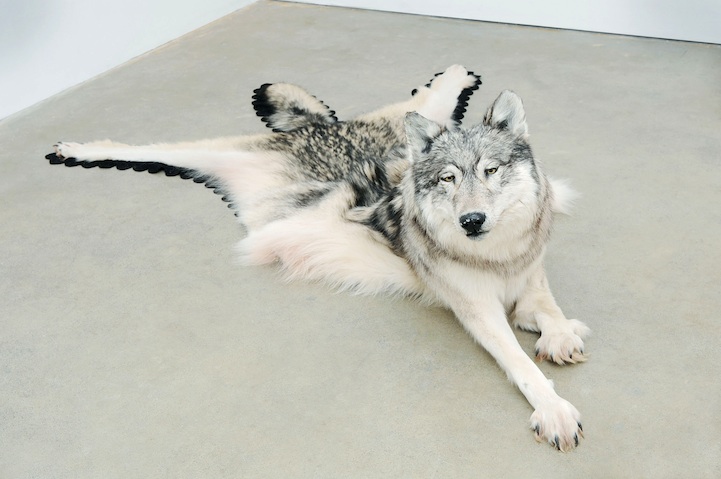 By combining two pre-taxidermied wolves into one, artist Nicholas Galanin has created a startling piece. Called Inert Wolf, it was made for a traveling group exhibition that deals with humanity's impact on the environment. “The inability to progress or move forward was the basic concept,” he tells us. It was created so that we could focus on those that are “affected by societies' sprawl.”

Originally, Galanin was going to use polar bears, “as they are, politically, in the spotlight surrounding climate change,” but ended up using wolves instead.

“I look at this piece in cultural terms,” he says. “Mainstream society often looks at Indigenous or Native American art through a romantic lens, not allowing a culture like my Tlingit community room for creative sovereign growth. The back half of this piece is contained, a captured trophy or rug to bring into the home, while the front continues to move. It is sad and the struggle is evident.

“Inert deserves to be seen in person; it generates a strong emotional response, viewers have cried.”

This piece is currently on exhibit in a solo show at Toronto Free Gallery and will move to a group exhibition at Montreal's Art Mur in February. More information and images of his works can be seen on Nicholas Galanin's website.