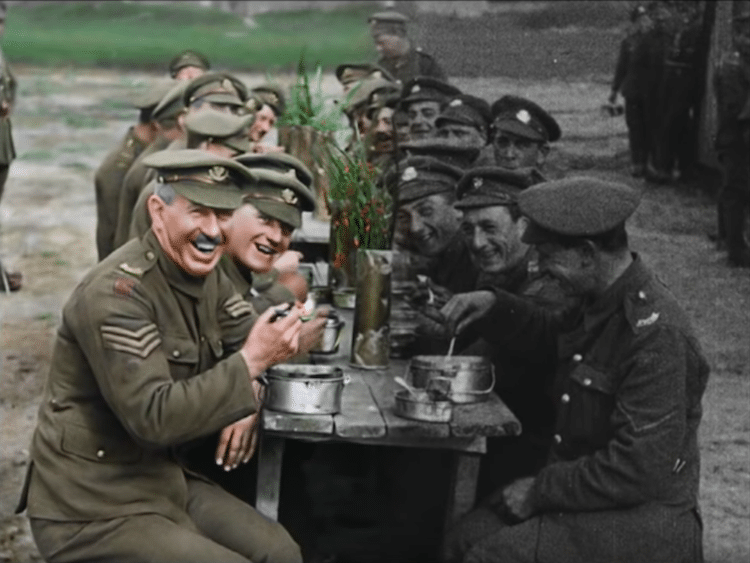 Time and time again, expert restorers have proven just what a difference colorized photos can make when looking back on history. And now, acclaimed director Peter Jackson is demonstrating the powerful impact of transforming black and white film into color for his new World War I documentary They Shall Not Grow Old.

Jackson, best known for his Lord of the Rings films, spent endless hours pouring over archival footage in an effort to bring a fresh, authentic look at the plight of British soldiers during the Great War. The never-before-seen film footage, provided by the BBC and Imperial War Museum, sees the soldiers expressing their hopes, dreams, and wartime experiences in the first person.

Jackson and his team used cutting-edge technology to not only add color to the footage but to also normalize the speed and shakiness of the clips. During that period, cameramen used a hand-cranked video camera, meaning that the footage varied enormously in its speed, even within the same reel. The time and effort invested has paid off, with the documentary receiving rave reviews for its ability to bring these moments of the past closer to our contemporary lives.

“To memorialize these soldiers a hundred years later is to try to bring some of their humanity back into the world again,” Jackson shares, “[to] stop them being a black-and-white cliche. Because they didn’t see the war in black and white. They did not experience this war in black and white. They experienced the war in full living color, so why shouldn’t we now with the technology we have turn it from a black-and-white war back into a color war again?”

They Shall Not Grow Old removes these soldiers from dusty history books and gives them the respect and honor so richly deserved. Moving well beyond facts and figures about battles won and lost, the film gives a humane face to the effects of war and is a reminder that these soldiers are not so different than the men and women who are on the front lines today.

“It's the film's faces that stick longest in the mind. Through the exhaustive transformation completed by Jackson's team, visages that were all but indistinguishably blurred in the archives take on shape, character and creases of worry, terror and occasional hilarity,” writes Variety‘s Guy Lodge. “In conjunction with the film's intricately stitched narration, its soldiers turn from cold statistics to warm, quivering human beings, drawing us with renewed empathy into a Great War that, they all but unanimously agree, had precious little greatness to it.”

Learn more about the how Peter Jackson brought WWI footage to life through colorization.

Watch the trailer for They Shall Not Grow Old.

Interested in history? Share
Like My Modern Met on Facebook
Get Our Weekly Newsletter
Become a
My Modern Met Member
As a member, you'll join us in our effort to support the arts.
Become a Member
Explore member benefits