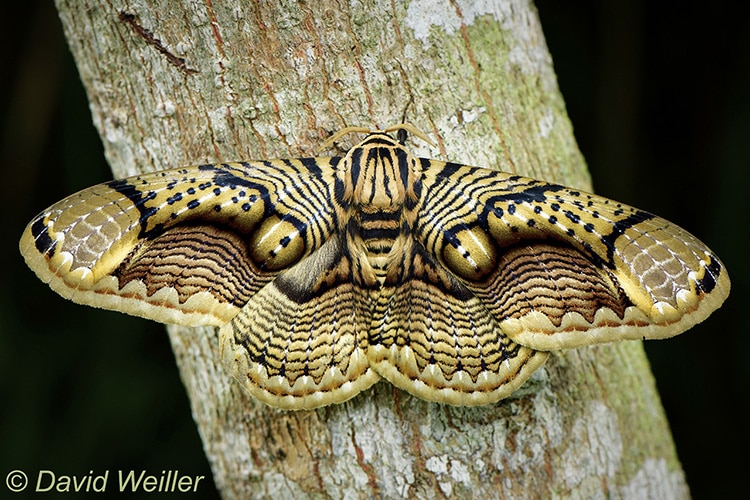 On one of David Weiller's many expeditions to the rainforest, he was drawn like a moth to a flame to a slumbering Brahmaea Hearseyi moth occupying a nearby tree trunk. “This was a lucky find as it was attracted at night to the light of my bungalow,” says the wildlife photographer. What makes this moth so different from any other? Well, it's wings look like a pair of tiger eyes.

“When I saw [the Brahmin Moth], freshly hatched and with its striking patterns, I was so surprised. After observing it fly around the light for a while, it settled for the night on a nearby tree trunk,” Weiller explains. “The next morning, at dawn, it was still sitting quietly on the same spot. I set up my tripod, camera, and macro lens, and started to take a few pictures and videos of it slowly getting warm by flapping its wings. A few minutes later, the sun came up and it flew away toward the blue sky.”

Weiller had to travel to Borneo in order to find these uniquely patterned moths who are native to Burma, Western China, and the Northeast Himalayans. Thankfully, these early morning moments before the colorful insects have had the chance to warm up their wings enough to fly about are frequently documented and shared by avid wildlife photographers. The HD video that Weiller captured (which can be viewed below) gives you a close look at the moth’s markings which resemble tiger eyes from one angle and owls eyes from the opposite viewpoint. This chameleon-like camouflage helps these large moths blend into the woodsy flora of their native habitats. Weiller’s video and photographs let us travel to see these moth's unique markings in person without ever having to board a plane.

Weiller splits his time between resting in France and traveling to exotic locations to capture the local fauna in their natural habitats. The artist’s first foray into wildlife photography was in 2008 when he and fellow photographer, Thomas Marent, went to Africa to take pictures for Marent’s upcoming primate book. From that moment forward, Weiller dedicated his free time to sharing elusive wildlife with the world. You can see even more of Weiller’s photographs on Instagram and follow his firsthand glimpses of nature on YouTube.

These moths are known for the coloring and unique patterns on their wings that look like tiger eyes. 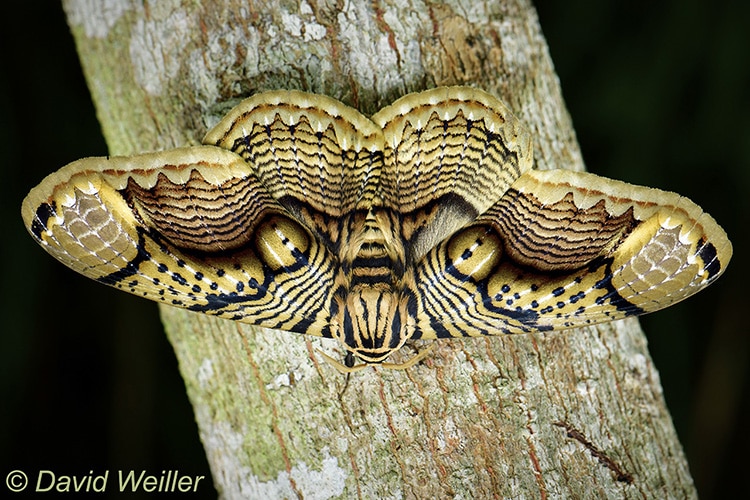 From the opposite angle, it's said that they resemble owls. 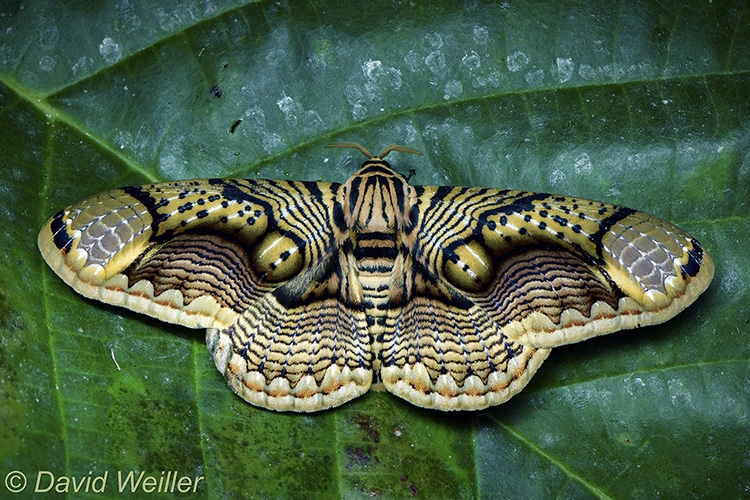