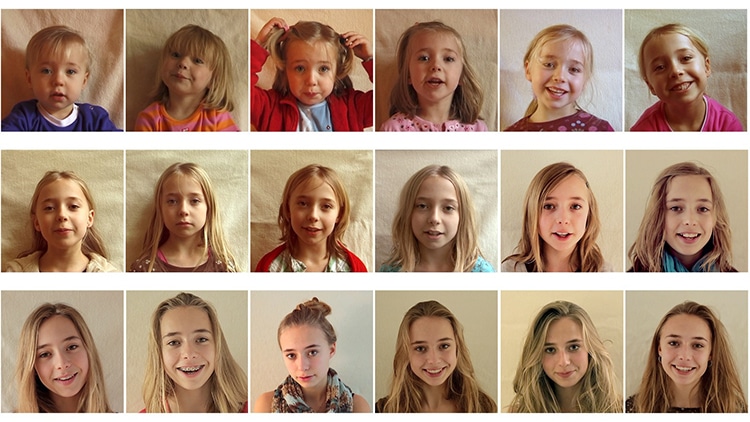 Many parents will tell you that their children grow up at a startling rate and that you should treasure every moment. No one more so than Dutch film maker, photographer, and father Frans Hofmeester who—over the course of 18 years—regularly captured those precious moments from his children’s lives, from baby to adolescent to young adult. From his captivating time-lapse videos, he explains, “the viewer can observe one of the most mysterious and profound processes in human life – to grow up and age.”

He began shooting short footage of his daughter Lotte every week since the day she was born in 1999. Hofmeester explains, “She was changing at such a rapid pace, that I felt the need to document the way she looked, to keep my memories intact.” After twelve years of filming her, he started doing the same with his son Vince. By splicing his years of footage together to create two time-lapse videos, viewers are able to watch his children grow up in less than six minutes.

Filming every Saturday morning, Hofmeester would ask his children about their week, or what they did at school. Hofmeester was able to keep the background consistent, thanks to a white baby blanket. However, his subjects moods were more difficult to control. Hofmeester admits that “sometimes they did not feel like it.” Both videos display a range of human emotion from happy and cheeky to sleepy and grumpy. Lotte’s video is sweet and shy, while Vince's is more playful and mischievous, showing him pulling faces at the camera.

Hofmeester released the YouTube video, entitled Portrait of Lotte, 0 to 18 years on Lotte’s 18th birthday—October 28, 2017. Since then, his time-lapses videos have generated over 67 million views, and have attracted over 100 million viewers across multiple social platforms. Scroll down to watch the videos.

Watch Frans Hofmeester’s captivating time-lapse video of his daughter Lotte growing up from 0 to 18 years old.

Watch his son Vince grow up from 0 to 14 years old in just over four minutes.

All images via Frans Hofmeester.