The world is on the cusp of losing another important species, as new reports estimate that just 12 vaquitas remain in the wild. This small porpoise, which lives in the northern part of the Gulf of California, has been in danger for quite some time, with the population declining from 600 in 1997 down to 30 in 2017. Now, word is spreading that with just one dozen left, the vaquita's future is in critical condition.

What is a vaquita?

The vaquita, or Phocoena sinus, is a small porpoise that reaches about 5 feet in length and about 120 pounds in adulthood. Quite solitary in their behavior, they live in shallow, warm water. This is quite unusual, as vaquitas are the only porpoise species to tolerate warm water. All other species prefer water cooler than 68 degrees Fahrenheit. Distinct for the dark rings around their eyes, they're affectionately known as “pandas of the sea.”

This animal is called a Vaquita, they live in the northern gulf of California, and there are only 12 of them left

Why is the vaquita going extinct?

As opposed to the white rhino, which faced extinction due to poaching, the vaquita itself isn't actively sought after by fishermen. But unfortunately, traditional fishing methods in Mexico have contributed to the eradication of this marine species. The use of gill nets set by fishermen to catch an endangered fish species called totoaba is the culprit. Totoaba, which is considered a delicacy in China, can fetch up to $50,000 on the black market. And though Mexican authorities have outlawed both totoaba fishing and gill nets, the lure of a big profit pushes local fishermen to continue the practice.

All this affects the vaquita because while the gill nets catch totoaba, they also trap the small porpoises, which get tangled in the nets. Andrea Crosta of the wildlife trafficking watchdog group Elephant Action League recently traveled to Mexico, where multiple sources confirmed that the number of living vaquita was dangerously low. He fears that the remaining vaquita won't make it through the upcoming illegal fishing season.

Unfortunately, when asked if he saw any will by local fishermen to curb their use of the illegal nets, his observations weren't promising. “I think they are actually waiting for the vaquita to go extinct so they can fish more and with fewer restrictions. The central government of Mexico recently stepped up efforts to curb the use of gill nets in the area where the vaquita lives, but with very poor results, in my opinion,” he shared. “I personally saw dozens of illegal fishing vessels (pangas) going out to sea in the middle of the day, even in areas patrolled by the Mexican navy. During the night it is even worse.”

What is being done to save the vaquita?

Aside from legal measures and education thanks to organizations like WWF and Viva Vaquita, some conservationists were hopeful that a few vaquitas could be rescued and bred in captivity. In 2017, the conservation group Vaquita CPR attempted a rescue mission. Unfortunately, they were without success. While all animals undergo some stress while being transferred into captivity, the female porpoise the team rescued was not able to withstand the conditions and died shortly after being brought back to the sea. 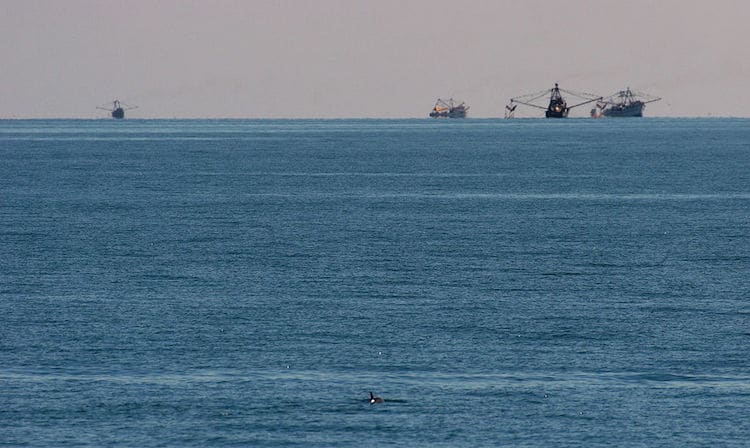 A vaquita in the foreground with fishing boats in the background. (Photo: Paula Olson, NOAA [Public domain], via Wikimedia Commons)

The incident was a heartbreaking turn for those who were hoping that captivity would be a viable solution for preserving the species. As organizations like Elephant Action League and Sea Shepherd continue to monitor the Gulf of California and make sense of the trafficking routes in China, Crosta reminds us that whether the vaquita disappears or not, we must continue to fight for them.

“Even if they kill all the vaquitas, we owe it to them to tell their full story, the truth, and we want to take down those responsible, who are not the fishermen, by the way.”

Learn more about the struggle to save the vaquita, also known as the desert porpoise, in this short documentary.