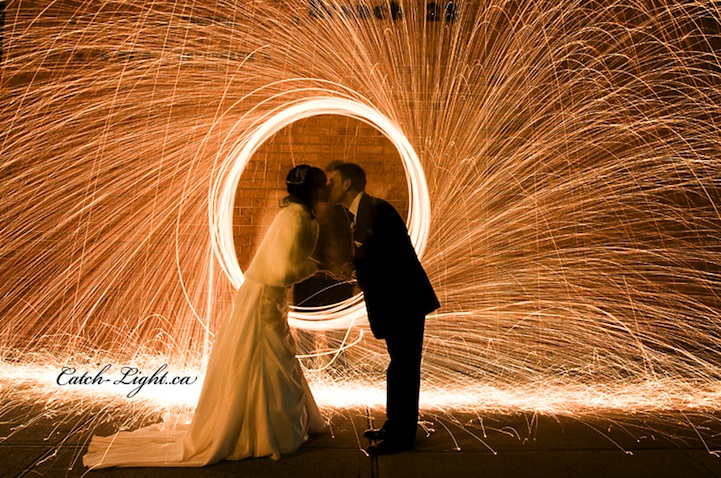 Now that's a wedding picture! Winter Wedding Light Painting was taken by Danny Turcotte Jr., a freelance and wedding photographer based out of North Bay Ontario and owner of Catch-Light Photography. It's of couple Kory and Matt, who bared the shivering cold for this magnificent shot.

Update: We got in touch with the photographer to ask him the story behind this shot. Read that brief interview, below.

How did the idea come about to incorporate light painting in this wedding picture?
The idea for light painting in a photo came to me last year when I started light painting in my 365. I always wanted to add it to a wedding photo but it was always hard to convince a couple to come outside in the dark at night after their supper or dance. People at weddings are always so busy, it's hard to get them away for some photos and to have them willing to stand there with flying sparks everywhere.

I did a version of this photo last year with a couple Shannon and Matt and I only had enough time with them for three tries and two didn't work out as planned. I knew I'd get another chance one day. So when Kory and Matt said they would like to try a light painting photo, I was stoked. We did theirs in the winter and bitter cold.

How long did the set-up take?
Camera is on a tripod with a cable release to lock open the shutter. I pre-focused on the ground where I was going to have the couple stand. I also had the camera on self-timer so I had enough time to run over and light the steel wool on fire and start the spin before the photo started to record. When I heard the shutter click, I kept spinning the circle until all the steel wool had burnt off. Then I ran back to the camera and clicked off the shutter to end the photo.

Can you give us some pointers on how to take light painting photos like this?
As for the set-up, the biggest problem of light painting is having total darkness. (We were in a town outside of a building near the city streets.) At night, there's always street lights turned on and that's the main problem, that the street lights let off a lot of light as the photo is taking place. So you have to worry about ambient light spilling into your photo. It works way way better to light paint in total darkness because, as you're taking the photo, which could be anywhere from 30 seconds to 5 minutes long, any of that other ambient light will be really bright over the course of that long 3 minute photo, washing out all the light painting that you have done.

Light painting is always about experimenting, trying new things and new ideas. You have to get out there in the dark with all kinds of lights and just test them to know their brightness, their color and how they work on location. Because when you're out there in the pitch black of the night, stumbling around and banging into everything, it's a whole other world. The last thing you need is to be figuring out where the on/off switch is. Be prepared is my motto.

Any funny or inspiring stories from this shot?
The funny thing about this photo was doing it in the Canadian winter bitter cold. It was minus 21 and freezing that night so I ran out and set-up all my gear. The tripod and camera did all the pre-focusing. I got the ropes and steel wool ready, then had to go in and warm up my hands.

Now Kory and Matt came out, I set them up for the photo and they knew that there would be sparks from this but what they didn't know is just how crazy it actually is! When you start spinning that steel wool, it goes flying everywhere and, sometimes, chunks come off at random but they were awesome and held that pose as I spun burning steel wool 1 foot from their faces. A few pieces did fly off onto Kory's dress but we put them out fast and she was not worried at all. They were just so excited for the photo.