Yayoi Kusama has carved out a name for herself as a top contemporary artist. Throughout her illustrious career, the Japanese creative has developed a signature approach to her craft. Characterized by polka dots, bold color palettes, and organic forms, her aesthetic is perhaps best typified by her pumpkin art, a collection of works celebrating the subject's “generous unpretentiousness.”

Rooted in her childhood, Kusama's love of pumpkins has significantly shaped her practice for over 70 years. Whether cropping up as detailed drawings, public sculptures, or immersive installations, Kusama's stylized interpretations of the humble squash have become some of her most well-known works—and are among contemporary art‘s most iconic masterpieces.

Kusama's love of pumpkins can be traced back to her early childhood, which she spent in Matsumoto, Japan. Born into a farming family in 1929, Kusama began drawing pictures of pumpkins as an elementary school student. It was during this time that the artist also began experiencing vivid hallucinations, which she has since attributed as the inspiration behind many of her distinctive motifs: polka dots, flowers, and, of course, pumpkins.

Unlike polka dots and flowers—whose hallucinatory forms frightened the budding artist—Kusama found comfort in pumpkins, noting that she was “enchanted by their charming and winsome form” as early as her first encounter. “The first time I ever saw a pumpkin was when I was in elementary school and went with my grandfather to visit a big seed-harvesting ground,” Kusama recalls in Infinity Net, her autobiography. “And there it was: a pumpkin the size of a man's head . . . It immediately began speaking to me in a most animated manner.” 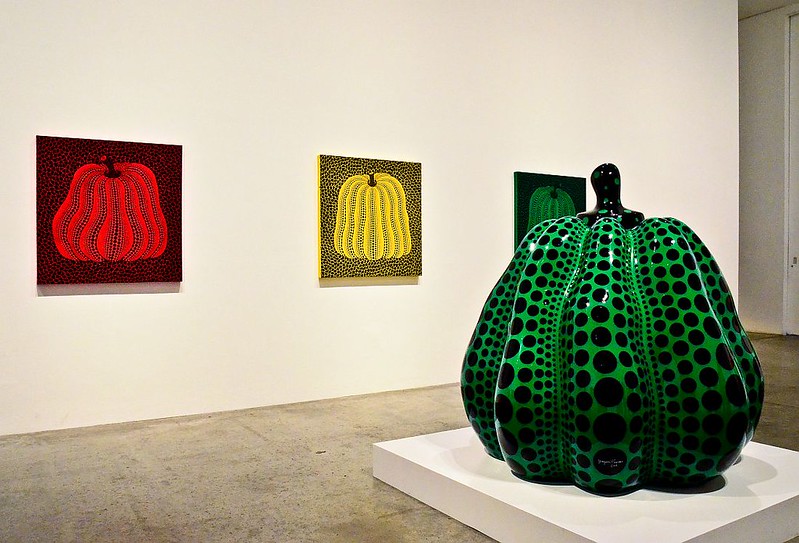 Much more than a childhood interest, Kusama's love of gourds lasted well into her teenage years. In fact, at the age of 17, she made her penchant for pumpkins public with Kabocha, a Nihonga-style painting she exhibited in a traveling exhibition. After making its grand debut, however, the pumpkin motif disappeared from Kusama's portfolio for decades, as the artist decided to instead dedicate herself to performance art.

In the 1970s and 80s, however, Kusama rediscovered her artistic interests in the pumpkin. During this time, she started creating paintings, prints, and drawings of the subject. In addition to their distinctive polka-dotted rinds, vivid color schemes, and bulbous silhouettes, her pumpkins (which, today, remain largely unchanged) are recognizable for their anthropomorphism—a characteristic that can perhaps be attributed to Kusama's earlier hallucinatory visions of a talking pumpkin. “I love pumpkins,” the artist said in 2015, “because of their humorous form, warm feeling, and a human-like quality.” 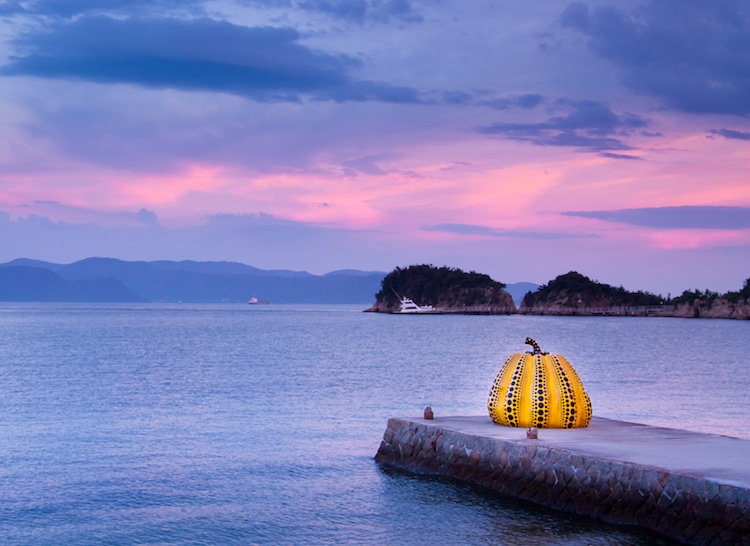 Though Kusama can successfully convey this “human-like quality” through works on paper or canvas, it comes to life when rendered in three dimensions. In the 1990s, the artist fully realized the sculptural capabilities of the squash when she opted to incorporate it into one of her famous Mirror Rooms, a series of interactive installations that invite viewers to wander through surreal environments.

Kusama created Mirror Room (Pumpkin) for a 1991 exhibition at the Fuji Television Gallery, a space credited with popularizing contemporary art in Japan. To craft Mirror Room (Pumpkin), Kusama covered the walls, floor, and ceiling of a room in a coat of yellow paint adorned with black polka dots. In the center of the space, she installed a mirrored cube filled with paper-maché pumpkins. Through a peep-hole-like opening, visitors could view this makeshift pumpkin patch, which, due to the cube's reflective interior, appeared as an endless sprawl.

In 1994, Kusama again turned to sculpture as a means of channeling her love of pumpkins. This time, however, she opted to imagine her muse as a massive, free-standing sculpture. Perched at the end of a pier in the Benesse Art Site—a Naoshima Island-based arts organization renowned for its growing collection of contemporary art—this spotted yellow Pumpkin has played a pivotal role in Kusama's career and contemporary art legacy. In addition to kick-starting the island's celebrated collection, the piece laid the groundwork for Kusama's later open-air sculptures, which she continues crafting today. 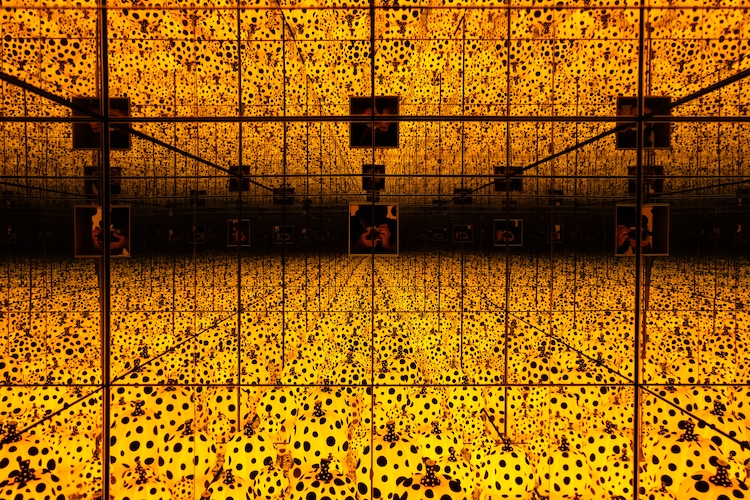 Kusama has created several new works of pumpkin art since the start of the new millennium. In 2016 and 2017, respectively, she debuted two new pumpkin-themed Mirror Rooms—titled All the Eternal Love I Have for the Pumpkins and The Spirits Of The Pumpkins Descended Into The Heavens. In addition to illustrating her lifelong love of pumpkins, these installations draw on several of Kusama’s characteristic themes, including “infinity, the sublime, and obsessive repetition,” which have altogether contributed to an immersive experience for visitors.

On top of these traveling installations, Kusama's pumpkin sculptures have popped up in public spaces and private collections around the world, from the Kirishima Open Air Museum in Kagoshima Prefecture to the Donum Estate in California's Wine Country. The best part? We can only expect Kusama's collection of pumpkin works to grow, as it seems that the 90-year-old artist has no intention of slowing down anytime soon. “My desire to create works of pumpkins still continues,” she revealed in 2015. “I have enthusiasm as if I were still a child.”

Yayoi Kusama Announces She’s Opening Her Own Museum in Tokyo