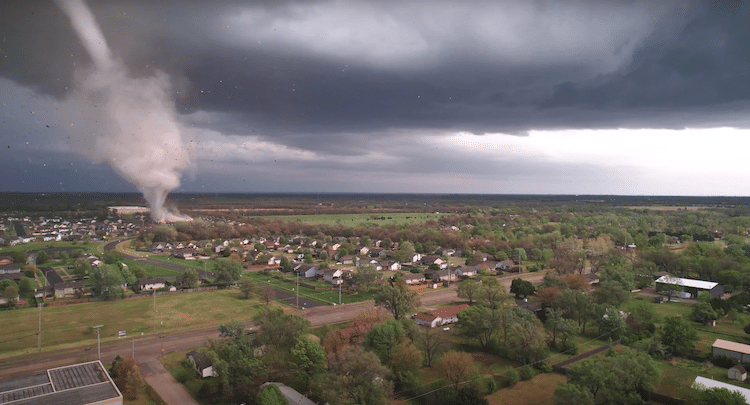 In 2022, there have already been 472 confirmed tornados. Residents of Kansas are used to dealing with these vicious storms, but a recent twister in a Wichita suburb was one to remember. Storm chaser and extreme meteorologist Dr. Reed Timmer was on hand to give an unparalleled view of the tornado, which stayed on the ground for 21 minutes and traveled nearly 13 miles. His drone footage shows the impressive—and destructive—nature of the Andover tornado.

Luckily, there were no fatalities caused by this EF3 tornado, which generated winds of up to 165 miles per hour. Over the course of nine minutes, Timmer's drone footage shows just how quickly the tornado picked up speed and created a path of destruction. Visible debris is left flying as the storm touches down in Andover, Kansas. Timmer also published close-up footage of the tornado taken on the ground and it's incredible to see the high speed at which it moves.

Brandon Clement of WXChasing followed the aftermath of the storm with his drone, which brings the story full circle. Through his footage, we're able to clearly see the effect that this tornado had on the area and its residents. The sobering images remind us of the true impact of these storms that, while beautiful and impressive from afar, certainly take a toll on those who have lost homes and valuable possessions. Collapsed roofs, overturned cars, and uprooted trees are just some of the consequences of this storm.

Several families and businesses have started GoFundMe campaigns to help cover the cost of temporary housing, cleanup, and to purchase essentials—such as clothing—that were lost in the storm. Unfortunately, peak tornado season has yet to arrive, so there is still a possibility that there is more to come. Here's hoping that those affected by the Andover tornado will be able to quickly recover and rebuild.

On April 29, a tornado with winds of up to 165 mph touched down in a suburb of Wichita, Kansas. 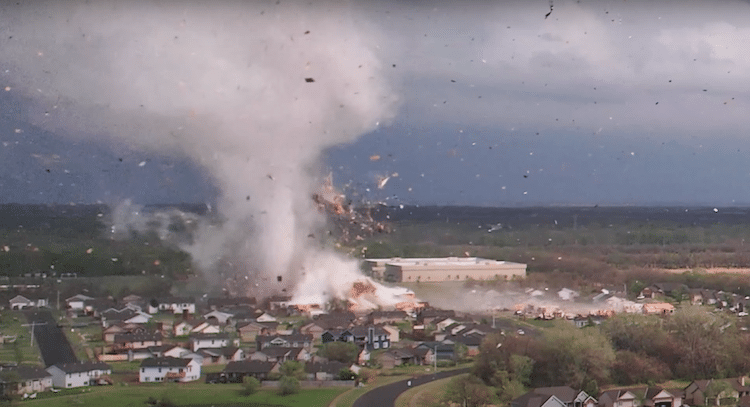 His on-the-ground video shows how quickly the tornado picked up speed.

More extreme close-range footage of destructive #tornado going through Andover Ks. Had bird in the air, attempted to deploy pressure and tornado was on top of me. Went from 10 to 300 mph in seconds pic.twitter.com/Faxnz3vaX8

Storm chaser Brandon Clement published footage that shows the aftermath of the tornado.