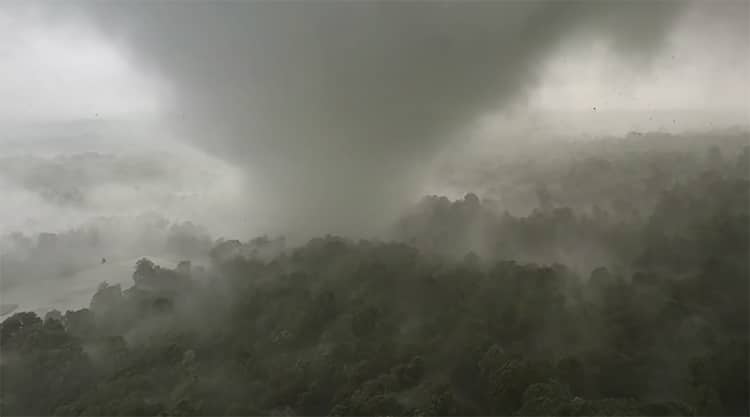 Tornado outside Yazoo City, MS on May 2, 2021. (Photo: screenshot from video by Brian Emfinger)

Weather photographers and meteorologists alike have found drones useful in capturing the changing conditions of Earth's atmosphere. An early pioneer of drone weather photography, storm chaser and news photographer Brian Emfinger has captured some of his most stunning footage using this high-flying technology. In a video posted to his YouTube channel on May 3, 2021, Emfinger's drone follows a tornado which ripped through land southeast of Yazoo City, Mississippi just the day before. Although he lost the drone to the severe weather, the video is a stunning (and sobering) view into the heart of the storm.

In recent weeks, severe weather has been wreaking havoc across the American south. Based in Arkansas, Emfinger has been chasing storms such as these for over two decades—photographing everything from lightning to tornadoes. On May 2, 2021, he set out to chase the storm brewing outside Yazoo City. Using a drone, Emfinger was able to get close to the swirling column of air.

In the background of the video, you will notice the directions of a GPS and the beeping of the drone controller. Emfinger was in fact almost directly under the drone. He writes, “The tornado was catching me (I was near/underneath the drone) so unfortunately the drone didn’t make it.” The roaring of the powerful, destructive winds can be heard in the background. Emfinger's drone video is impressive footage of a dangerous tornado, and an example of how drones can be used to investigate these still-mysterious weather events.

According to the National Severe Storms Laboratory (NSSL) at the National Oceanic and Atmospheric Administration (NOAA), the U.S. experiences about 1,200 tornados every year. Despite their frequency, there is still much that meteorologists do not know about how and why tornados form. Tornados are violently rotating columns of air which descend from a storm cloud and make contact with the Earth. A column of air which does not reach the Earth is called a funnel cloud. A tornado can be difficult to see. The standard tornado is visible as a condensation funnel—water droplets and dust in the rotating air make the column more visible. Whether difficult to see or not, a tornado's contact with the ground will be visible by its destruction.

Tornados form from the circulation of air of different temperatures during storms. Frequently associated with tornadoes are storms known as supercells. These storms contain mesocyclones (rotating air in the atmosphere). The mesocyclone eventually descends, and air of different temperatures converges to form a wall cloud. With low pressure and an intense updraft, a funnel can descend from the swirling cloud to touch the ground. Winds in the funnel can exceed 300 miles per hour; however, most tornadoes are much less powerful (although still damaging).

Meteorologists watch the weather closely for signs of tornadoes and study them when they do occur. However, the variations of why and when a tornado forms are still objects of active study. Drone videos such as Emfinger's may be helpful in studying this type of severe storm. As cool as storm chasing sounds, it is best left to the professionals. To learn what to do if you are faced with a tornado warning, check out this resource from Ready.gov.

Storm chaser Brian Emfinger captured close-up video footage of a tornado using a drone—the drone ended up lost when Emfinger had to outrun the storm.