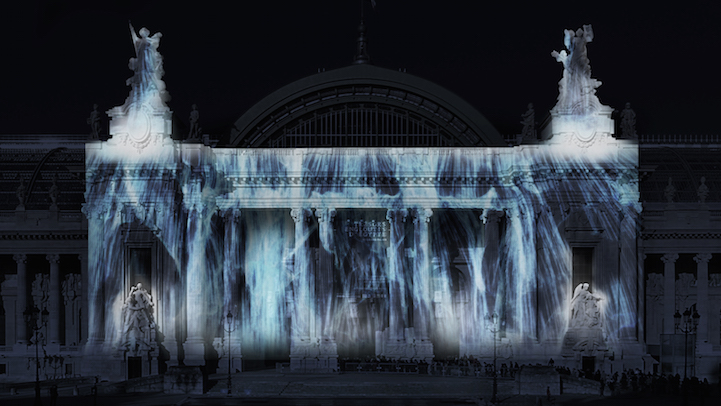 For this year's Art Paris Art Fair, every night, from March 26 till March 29, the facade of the iconic Grand Palais will turn into a beautiful, digital canvas. Three different video projections will transform the exterior of the building from 6pm to midnight. 2014 was the first year Art Paris Art Fair organized a projection, Miguel Chevalier's The Origin of the World, and this year, they've selected three artists, out of the 15 submitted, to show off their work.

TeamLab, an art collective of over 350 members, has covered the Grand Palais in a cascade of running water. Universe of Water Particles is a mesmerizing waterfall projection that makes the historic site look as if it's under a deluge. (For those wondering, this is the same company that recently created the interactive installation of moving flowers.)

Dominic Harris, an architect by training, was inspired by M.C. Escher's optical illusions in his work, A Concentric Study. As Cinimod Studio writes, ” In an evolution of traditional optical illusions, the patterns meander between calming geometric studies and more dramatic visual movements, accompanied throughout by a musical score that is integral to the overall experience. Both the visual and sonic elements of Harris's installation alter the viewer's perception of the Grand Palais so that its architecture takes on a new narrative.”

And, finally, Mounir Fatmi presents Modern Times, a thought-provoking piece about movement, speed and time with graphics that was inspired by the paintings of Sonia and Robert Delaunay, a Charlie Chaplin film, a Marcel Duchamp piece, calligraphy and philosophy.

Watch the video, below, to see the installations in action and to hear, two out of the three, artists speak about their works.

Universe of Water Particles on the Grand Palais, 2015 – TeamLab

Modern Times – A History of the Machine – Mounir Fatmi