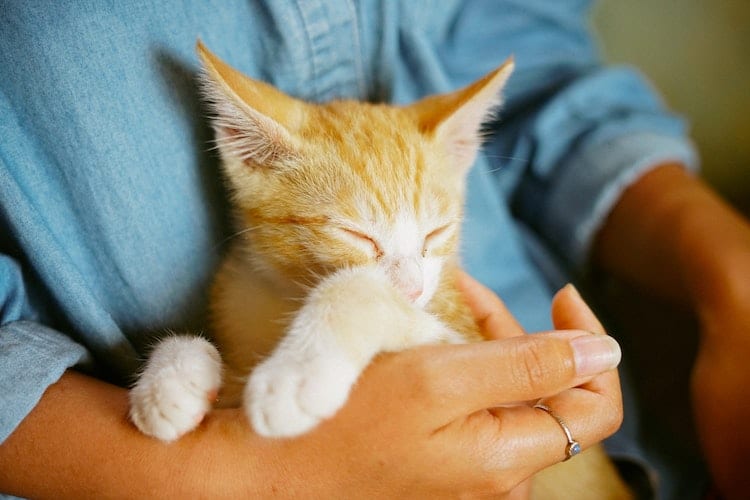 Cats are often stereotyped as being aloof creatures, but that generalization has been proven to be far from the truth. A couple of years ago, a scientific study revealed that felines actually enjoy social interaction, and additional findings have recently reported that cats care more about us than we might think. In the September 23, 2019 issue of the Current Biology journal, the article “Attachment Bonds Between Domestic Cats and Humans” shares that felines are just as strongly bonded to us as dogs or even infants are.

Animal behavior scientist Dr. Kristyn Vitale and her team at Oregon State University conducted the study. They performed a test that observes bonding behavior, which is the same that has been used on canines and babies. For this experiment, scientists had the cats (79 kittens and 38 adults) and their caregivers enter a new environment. After a couple of minutes in the unfamiliar room, the humans left—a potentially stressful situation for the animal. They returned two minutes later, and researchers watched how the cats acted when their caregivers came back. Felines with “secure attachment” greeted their owners and returned to exploring. In doing so, it meant that the kitties viewed their humans as a safe spot that they could come to in an unfamiliar situation.

About two-thirds of the cats (65.8%) and kittens (64.3%) in the study greeted their humans after they came back to the room, meaning that they have a secure bond with their caregiver. How does that stack up to dogs and infants? A 2018 study on canines showed 61% secure bonding, and infants have a 65% rate. So, the next time you think your cat doesn’t care about you, think again.

The Oregon State University research team is now turning their attention to the cats and kittens that end up in animal shelters every year. “We're currently looking at several aspects of cat attachment behavior,” Vitale said in a statement, “including whether socialization and fostering opportunities impact attachment security in shelter cats.”