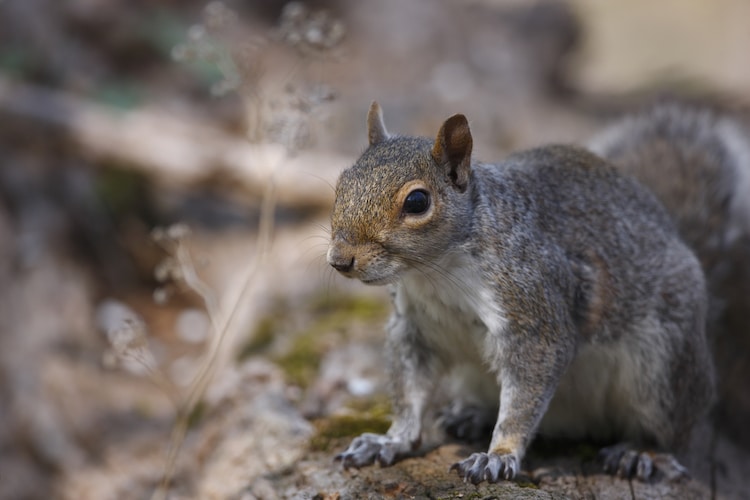 Humans aren't the only species to use context clues to determine if a situation is safe or not. It turns out, squirrels keep their ears open as well. In a new study, researchers found that Eastern gray squirrels are smart enough to take cues from other animals in their environment before they venture out of a safe hiding space. In this case, they're mainly eavesdropping on birds and using their alarm calls as an indicator of danger. Once they feel the coast is clear based on what they hear, the squirrels relax.

In order to prove their point, the scientists evaluated 54 Eastern gray squirrels in a park in Ohio. First, they played a recording of a red-tailed hawk's call. As a bird of prey, the hawk is a predator of the squirrels, so its presence is a call for alarm. Once the squirrels headed for safety, the scientists waited 30 seconds before playing one of two recordings. In one instance, the playback included bird chatter. This “chatter” corresponds to calls made from one bird to another when not under threat. Instead, the second recording was ambient noise containing no bird chatter.

The results were striking. During the initial recording of the red-tailed hawk, the researchers saw that the squirrels exhibited what they called “vigilance behaviors.” These behaviors include standing, fleeing, freezing, and looking up—all clear signs that the squirrels felt threatened. When the squirrels were played a recording of “bird chatter,” their behavior changed significantly and they spent far less time guarding themselves against danger.

While squirrels who were played ambient sound with no bird chatter also showed a decrease in vigilance behavior, they were more cautious than when they heard the chatter. And, the time to return to “normal” was much longer. Using this information, the researchers can assume that the squirrels use the vocal cues of their feathered friends into order to help understand if they need to worry about being hunted or not.

“We knew that squirrels eavesdropped on the alarm calls of some bird species,” state the authors, “but we were excited to find that they also eavesdrop on non-alarm sounds that indicate the birds feel relatively safe. Perhaps in some circumstances, cues of safety could be as important as cues of danger.”