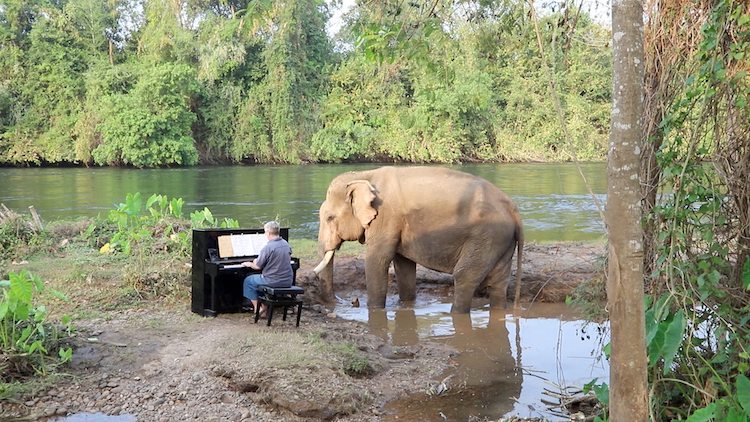 They say music is a universal language, and it turns out that’s even true for animals. At least it seems so according to the experience of Paul Barton—an artist and concert pianist who has been playing the piano to rescue elephants in Thailand since 2011. He performs a variety of classical compositions for the animals, who stand by attentively listening, seemingly spellbound by pieces from composers such as Beethoven, Schumann, and Grieg.

His most recent spectator is Mongkol, an aging bull elephant that was rescued from a life of captivity hauling trees for a logging company. “Occasionally, Mongkol when strolling along the river would stop by the piano,” Barton explains of his interaction with the gentle creature. “If we noticed him waiting I would go over and play him a few slow classical pieces.”

Over the years, Barton has played for quite a few of the friendly giants and formed a deep connection with many of them. “If you play classical music to an elephant. . . the reaction is priceless,” the pianist says. “There is a special bond between you and the elephant. You are communicating with them in a different language. That language is neither our nor theirs. There is something infinitesimally wonderful in a piece of Beethoven that connects me to that elephant and that feeling is otherworldly.”

Most of the elephants that Barton plays for are rescues from the logging industry, which was banned in Thailand in 1989. Many have ended up blind or sustained other injuries as a result of their grueling employment. Now, they reside at Elephants World, a sanctuary on the River Kwai in Kanchanaburi, Thailand where they are cared for and can live peacefully.

Scroll down to see Barton perform his most recent concerts for his animal friend Mongkol.

All images via Paul Barton.