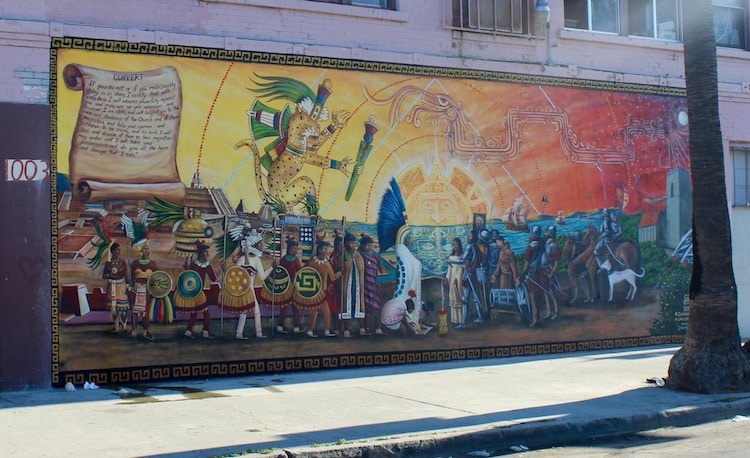 When artist Clinton Bopp moved to Los Angeles twenty years ago, he was immediately struck by the city’s powerful tradition of public art. Murals filled with symbolism tell the history of the city’s cultures, particularly for Latino and African American communities. Though LA enacted a ban on murals in 2003, it was lifted ten years later and the city resumed its role as a thriving hub for public art.

Bopp is firmly at the center of this movement, actively involving himself in the communities where he paints. His vibrant colors make the symbolism in his work pop off the wall, inviting passersby to take in the work. Bopp combines his skills as a storyteller and artist to relay a message in each of his murals. And by respectfully depicting the history of each community he works in, he’s allowing them to hold on to their collective history.

We had the opportunity to chat with the artist about the history of LA’s murals and how he handles the responsibility of creating community-based art. Read on for our exclusive interview. 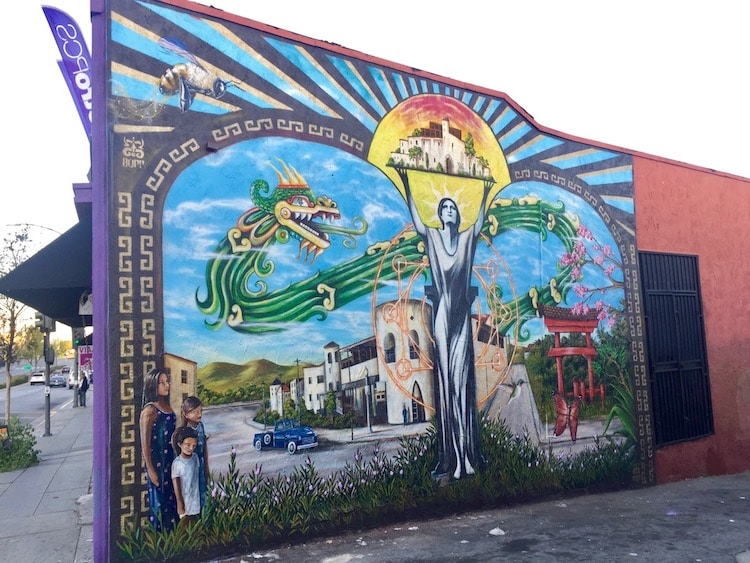 How did you become involved in the arts and when did you discover muralism as an art form?

As a child, I was constantly drawing and creating art. It was something I always inherently wanted to do. For me, it felt like a way to communicate. The more I drew, the better I got, and the easier it became to communicate my ideas.

When I moved to Los Angeles the world of murals was exposed to me for the first time. After moving to East LA, a part of the city rich in mural history, I realized the power murals can have on communities. I saw first hand how powerful murals are because of the stories they tell. Once I witnessed that impact, I was hooked.

Can you describe the impact LA’s murals had on you when you relocated from New Zealand?

The impact the LA murals had on me 20 years ago was quite significant because at the time there were two distinct scenes happening, traditional murals and the graffiti. I was playing in both worlds but the rich culture of storytelling in traditional murals really drew me in.

The walls in East LA that really stood out to me communicated stories that created a sense of community. It was those walls that were remembered by the community for generations and that left a lasting social impact. It was these kinds of murals that inspired me to create the work I do today. 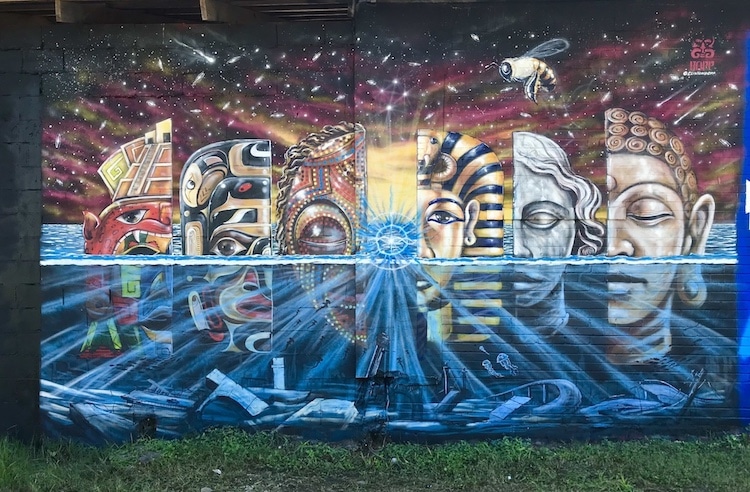 What do you think is the most common misconception that people have when it comes to LA’s murals?

Murals in LA are ever changing and vastly different. That’s the beauty of this kind of work in a city like LA. Los Angeles is a melting pot of people and cultures from all around the world who come here to paint. You can find a little bit of everything in this city, and that diversity is really exciting. There is something for everyone here.

LA is vast and spread out but if you take the time, you can find the most amazing work tucked away in unlikely places. That being said, I’d say the most common misconception is that the best work is out in the most popular parts of the city because the most incredible gems are sometimes where you would least expect them.

What do you believe the responsibility of a muralist is when it comes to the local community?

When you paint a mural, I think it’s incredibly important to think about the community it will live within. In some parts of LA you can get away with painting anything you want but in other parts of the city, the community will react to the work in either a positive or a negative way. This makes sense because they live and interact with the mural on a daily basis.

If an artist can take into consideration the community that they are painting in, I find that the community will take ownership of the mural. It will have a positive impact on them and the work will last longer.

How do you use your art to enact change?

I try to incorporate narratives in all the work that I create. To me, that’s how you create a lasting impact, which in turn creates change. I am focused on creating a positive outlook for the future, telling stories from history that connect the past and present with a glance into a future filled with hope and unity.

Our lives are constantly surrounded by content and information telling us what’s negative in our world, I like to focus on the positive. My message for change is a reminder that we are all one on this earth, connected as human beings regardless of race, culture, religion, or political beliefs. There is more good in the world than bad and I’d like us as a society to hold on to that and remember it.

What makes Los Angeles unique in terms of muralism?

Los Angeles is definitely a unique city for murals, and it’s growing quickly. The city has had an interesting history with murals, starting in the 1930s. Now, we are seeing more murals than ever before. There is an energy that you can feel, similar to what New York was for artists in the 1980s. But even better than New York, I’d say the best part about Los Angeles for a muralist is the weather. Where else could you paint year round outdoors? 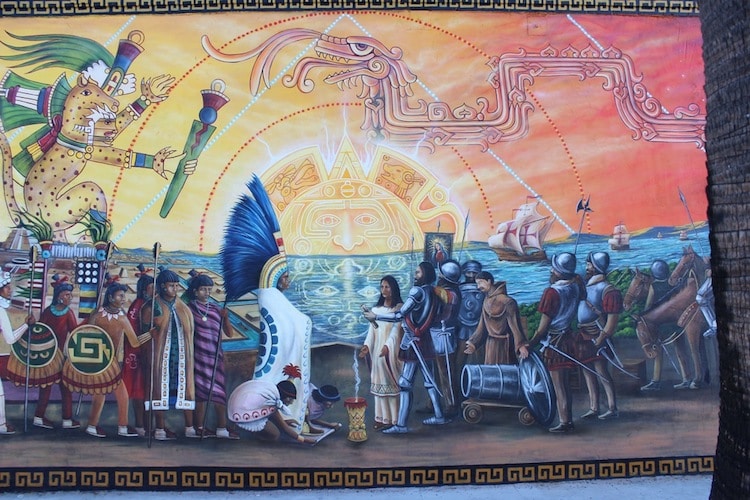 Have you seen a shift since the public mural art ban was lifted in 2013?

Since the mural ban was lifted, there has definitely been a big increase in murals being produced within the city. A lot of them are still privately funded through business and various organizations that have started to use that platform to beautify neighborhoods, which is great for the city.

Can you tell us about a particular project you worked on that made an impact on you personally or artistically?

There have been many projects that have made an impact on me. There are two that really stand out.

I painted a large scale wall in South LA all about water. It was very relevant because I painted it in the heat of LA's water crisis. I painted a “day of the dead” style skeleton as the main figure, with water and nature flowing through its body. There was a polarized reaction within the community. The younger generation loved it and resonated with the symbolism. The older generation looked at it as a negative. Even though the overall image was very positive. It caused a problem in the community and really illustrated the fact that I had to do my homework before starting a project because the community is really the essence of the wall. If they don’t resonate with it as a group, you have a problem.

The next wall I want to talk about was a great honor to paint. I was asked to paint a timeline of Mexican history in East LA. The project took months of research, countless hours of sketching, and over a month to complete because it was a 100-foot wall. The story started from the birth of the Aztecs cities to the end of the Conquest of Mexico. The community loves it. 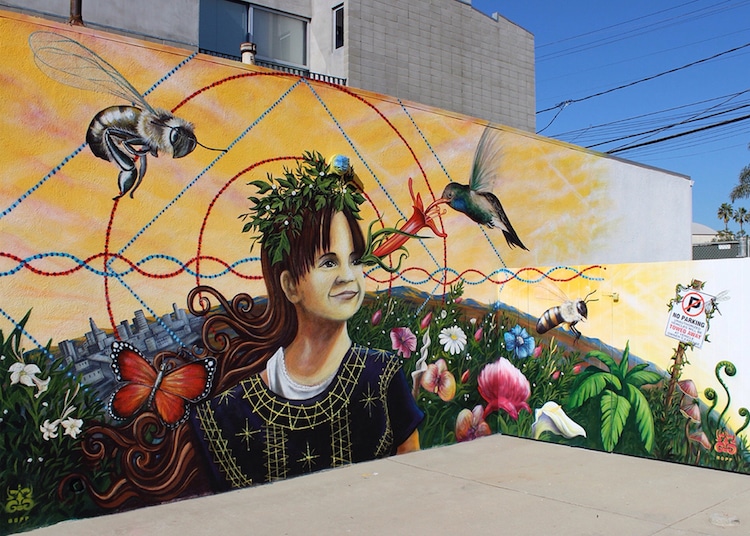 I have many interesting projects on the horizon. Coming up next month, I’ll be starting a project on a large-scale wall in Hermosa Beach that looks out onto the Pacific Coast Highway. I was commissioned by Dunn Edwards to create a mural on their building that symbolizes Los Angeles. I’m very excited about the opportunity. Keep an eye out as you drive down the Pacific Coast Highway!

My Modern Met granted permission to use photos by Clinton Bopp.