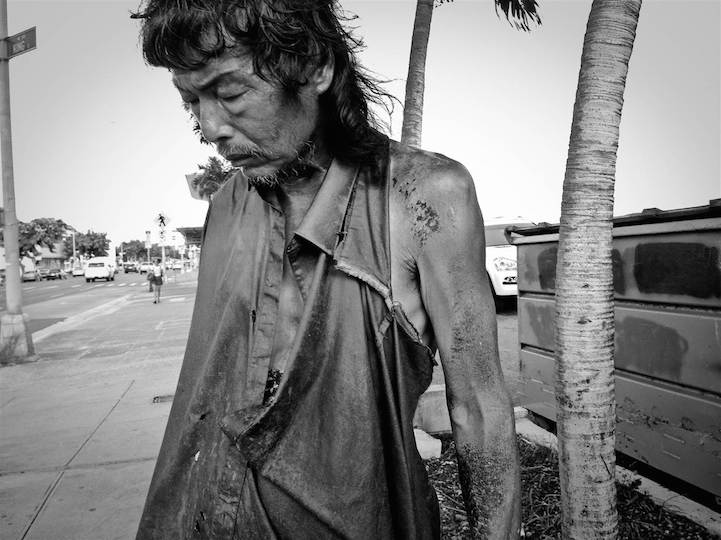 Honolulu, Hawaii-based photographer and law student Diana Kim can trace her love of photography back to her father, who used to own a photography studio on O'ahu. Until just a few years ago, however, not much else connected father and daughter except for a strained relationship marked by disappointment, hurt, and absence. A chance encounter brought the two back together again, sparking an extraordinarily moving journey of love and forgiveness in the face of mental illness, homelessness, and hardship. 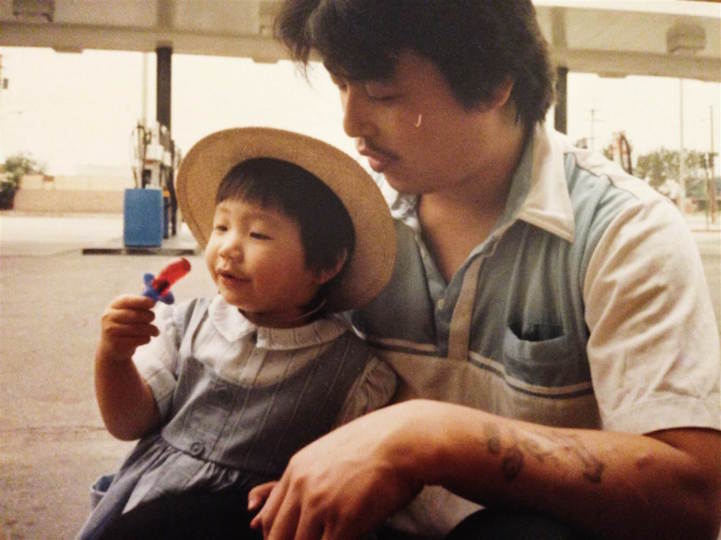 “Some of the earliest memories I have of my father is of him giving me Ring Pop candies whenever my mother and I would visit him,” Kim, 30, told NBC News. “I had an insatiable craving for sweets and he would go behind my mother's back and sneak me gummy bears and Ring Pops.”

That was over 25 years ago, when their family was still together. Eventually, however, Kim's parents separated, and her father left when she was 5. Afterward, she had a tough childhood, bouncing from place to place in search of a permanent home. She spent her younger years living at relatives' homes, staying with friends, or in parks and cars. Despite these early hardships, however, Kim has built a happy life for herself; she has a family of her own with her husband and two sons, and has pursued her passion for photography, advocacy, and law. 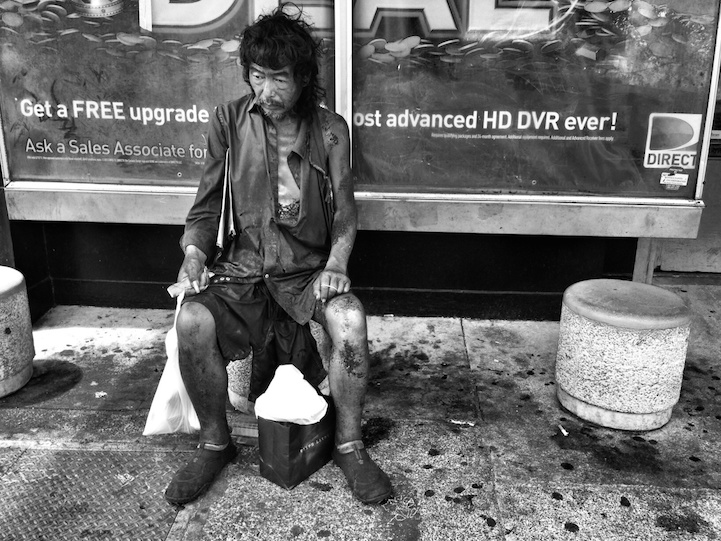 In 2003, as a student, Kim began photographing homeless people on the street for a personal project that would eventually lead to The Homeless Paradise, an initiative dedicated to humanizing the homeless by sharing their stories. The photographer told NextShark, “I first started photographing the homeless community in my first year of college. I gravitated towards the homeless because in some ways I identified with their struggle. I knew what it meant to be discarded, to be neglected, and to not have the stability and economic freedom I wanted. Overall, I understood their struggle because I struggled in the same way.”

Although Kim's project shaped much of her life and her decision to go to law school, the biggest impact came in 2012. While documenting homeless people on the streets of Honolulu, Kim came across her own father. The man who she remembered abandoning her as a child was now homeless, unwashed, dressed in rags, and extremely thin. Worst of all, he didn't even recognize her. 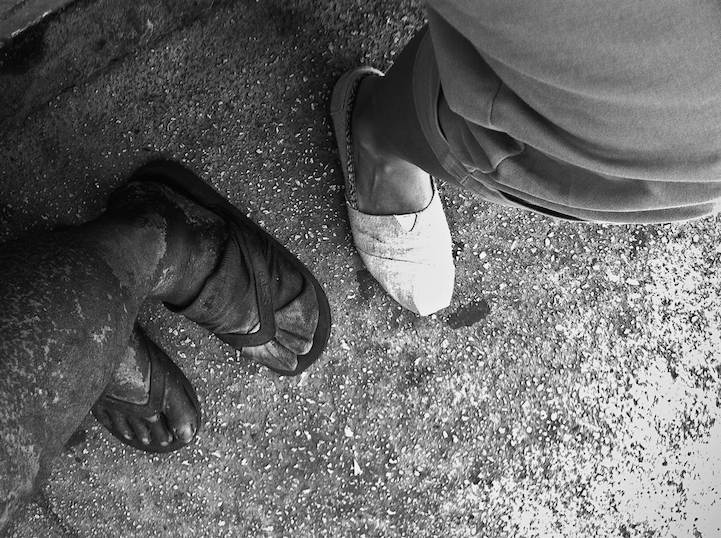 “I found him standing at the corner of a busy intersection staring into the asphalt. His hair was matted and his head rolled in small circles. . . I inched closer towards him, feeling a sense of uncertainty, and finally found the courage to call out to him. He didn't hear me. He couldn't hear me. I slowly stepped closer and mustered up the courage to tap him on the shoulder. Still nothing. He didn't look up. He didn't turn around. By now there were a couple of pedestrians who had noticed my efforts, and I could feel their eyes burning into my back and face. I could feel their curiosity pierce through the space between my father and I. The vast emptiness between us was broken by a woman who approached me and said, ‘Don't bother, he has been standing there for days.'

“A part of me wanted to scream at this woman, and the world, for being so callous. I wanted to yell that he was my father, that she was a heartless person to not care. But I realized that none of that would change the circumstances. So instead of screaming at her, I faced her and said, ‘I have to try.'” 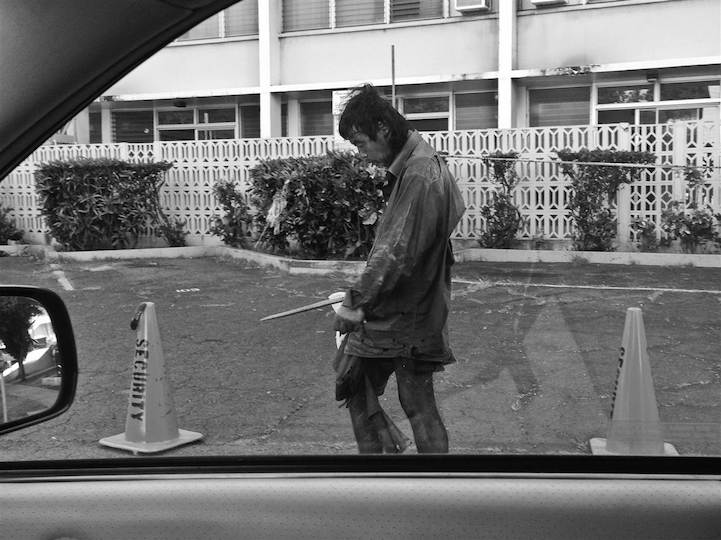 For the next two years, Kim kept returning to the street that her father called home. Sometimes he would be there, sometimes he wouldn't. Afflicted by severe schizophrenia, he was often unresponsive, or would argue intensely with the empty space in front of him. He refused to get treatment, take medication, eat, bathe, or wear any of the new clothes Kim brought him. Sitting next to him on the street corner or watching him from her car during one of his angry spells, Kim wondered if he would ever get better.

Despite how hopeless the situation seemed, Kim refused to stop helping him. She recalled one of the last “real conversations” she had had with her father a few years ago, during which he had said, “Diana, I am so sorry for not being in your life. I am so happy that you have a family of your own now. Do better for them. Don't worry about me or what everyone says about me. If you want to make me proud and happy, be there for your family the way your mom and I never were. Stop trying to save everyone…just worry about yourself and your family. And don't forget why I named you Diana, you are the light within the darkness.” In that moment, Kim reminisced, his words touched her heart, and she forgave him for everything. She loved her father, and she would never give up on him. 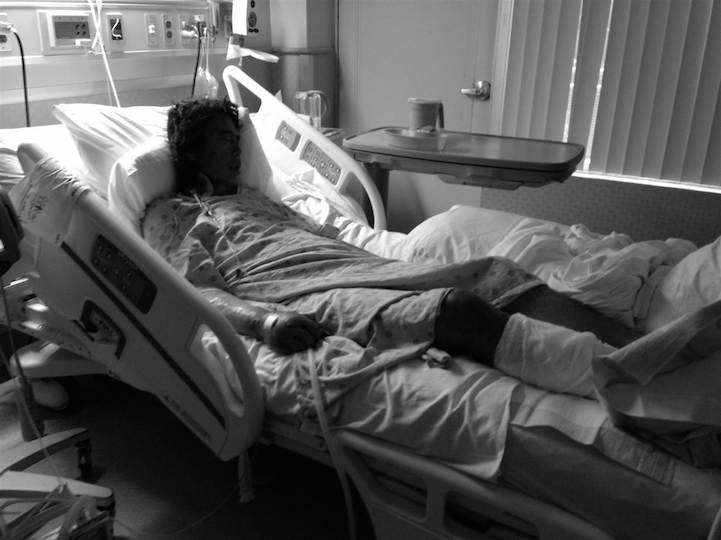 In October 2014, Kim got a call from her cousin. Her father had suffered a heart attack. He was found face-down on the sidewalk, but someone called the police, and he was rushed to critical care at the hospital. Kim said, “I cannot even begin to describe the feelings of gratitude for the person who took the time to help him. My biggest fear has always been that he would die on the streets, and nobody would know who he was. My desperation and feelings of hopelessness are over for now.”

Stepping into the hospital room, Kim saw her father lying on the bed, looking cleaner and better than she had seen him in a long time. She and her husband stood by his side, and then, “Just as we were about to leave, my father's eyes opened and he called out my name,” she wrote on her blog. “We had a good conversation, and I walked away feeling lighter that day.”

The next few months were difficult, as Kim's father went through ups and downs during his stay at the hospital. Despite his health problems, there was a silver lining to his heart attack–it led him to finally agree to receive help through a treatment plan, and day by day, he began to take back control of his life. 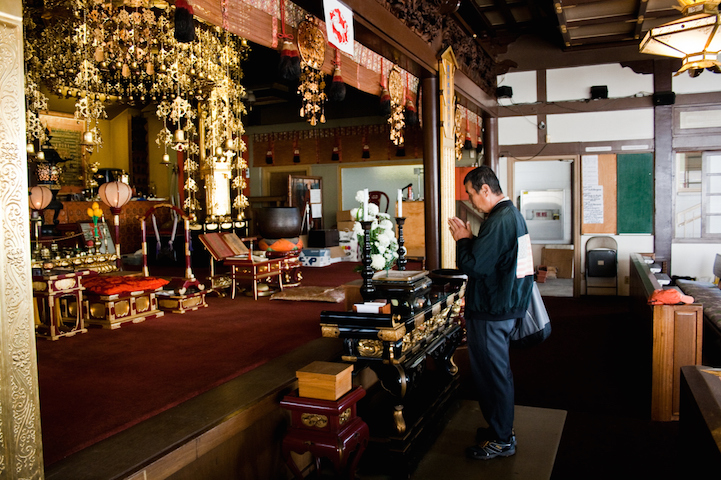 In December, Kim received a phone call from an unknown number. It was her father, asking her if she was free for coffee that morning. She immediately agreed and ran straight out of the house to see him. They met on the street where he had once owned a photography studio decades earlier–the same street where he had slept behind a pile of cardboard boxes for the past two years.

“As I pulled up into the parking lot, I saw my father's figure and my heart nearly stopped. He looked better than I had expected, and so different from the last image I had of him in the hospital,” Kim said. “It felt so good to see him so healthy, and standing so tall again. We must have hugged for a couple of minutes.” They paid their respects at a Buddhist temple, looked at old photos that Kim's father had kept with him all these years, and finally opened up to each other in a long, heartfelt conversation.

“I feel like I just met my father for the first time today,” Kim wrote on her blog later that day. “Our meeting was truly a miracle.” 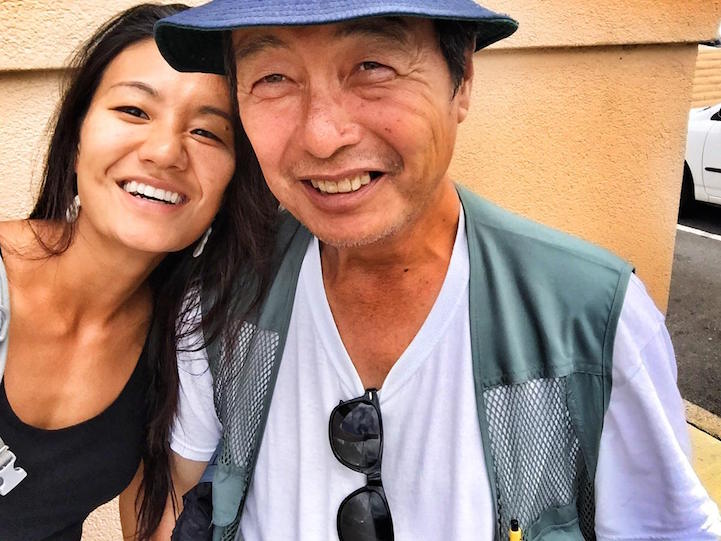 “Initially, the fact that I couldn't ‘fix' my dad tore me apart,” Kim shared in a photo essay published in Honolulu Magazine. “And because our time together on the streets was more than I had ever spent with him as a child, I struggled to reconcile my feelings toward my father's absence in my life, while continuing to care deeply for him and other homeless individuals. Over time, I learned to navigate through my feelings of desperation and became more vocal in my community about my father's condition and what it's like to watch a loved one battle mental illness.” 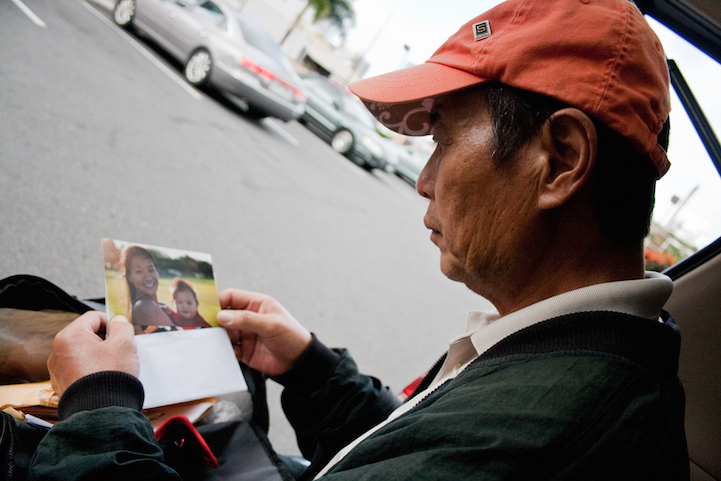 Now, Kim is happy to report that her father is doing well. “He is really proud of the fact that he has overcome such incredible adversity… He has goals, he has hope, and he has the will to succeed,” she told NBC News. He's spending time with friends, actively looking for a job, and planning to visit his family in South Korea soon. 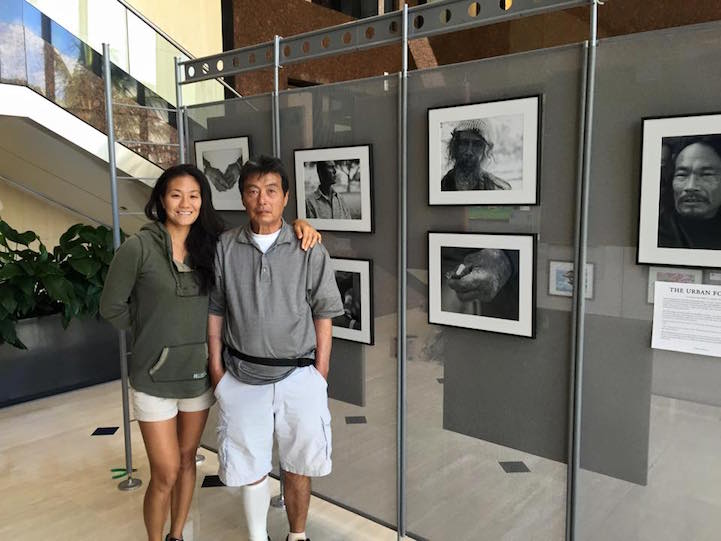 “Every day is a gift. Some days are more challenging than others, but seeing my father in the flesh is a constant reminder of the strength of the human spirit and how precious life is,” said Kim, who's taking her relationship with her dad one step at a time. “I never had a relationship with my father growing up, and there was a lot he did and didn't do that hurt me, but I have chosen to forgive him so we can move forward.” 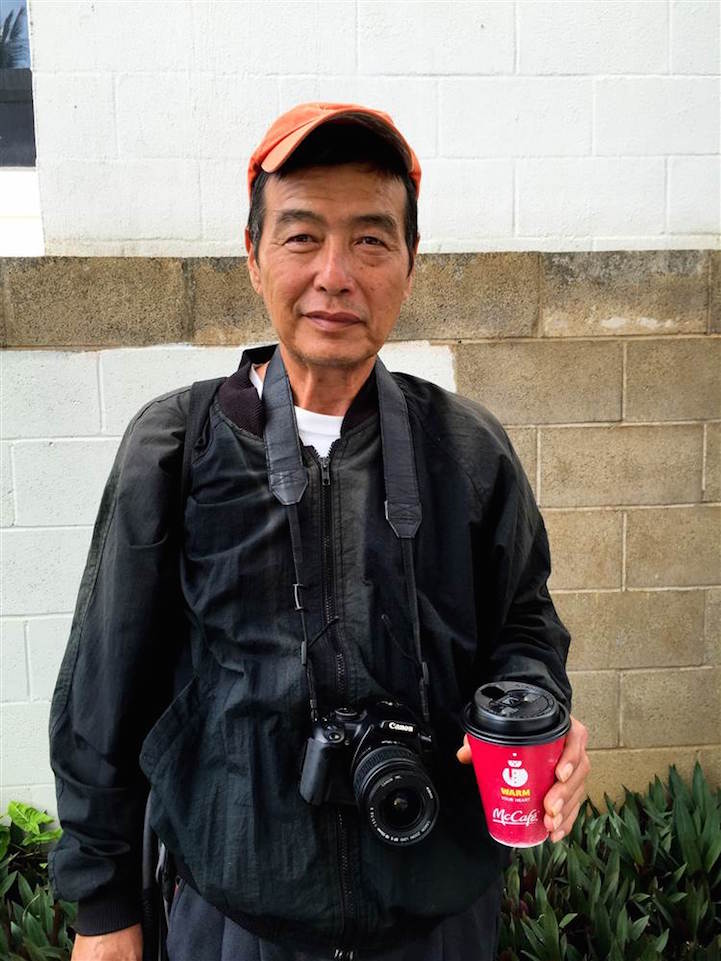 “Photography is not just about creating images–it is my window to experiencing the world and sharing relationships with people and things that I am drawn to. Looking through the lens and capturing that moment also captures my feelings in that moment. I think that, without the camera, I would have felt too naked and vulnerable to approach my father. I don't think I could have made the same journey without the purpose of documenting his journey as well. My goal, long before my father ever became homeless, was to humanize those who lived on the streets. They each have a story, and I hope that by sharing my own story, it helps to give new perspective.” 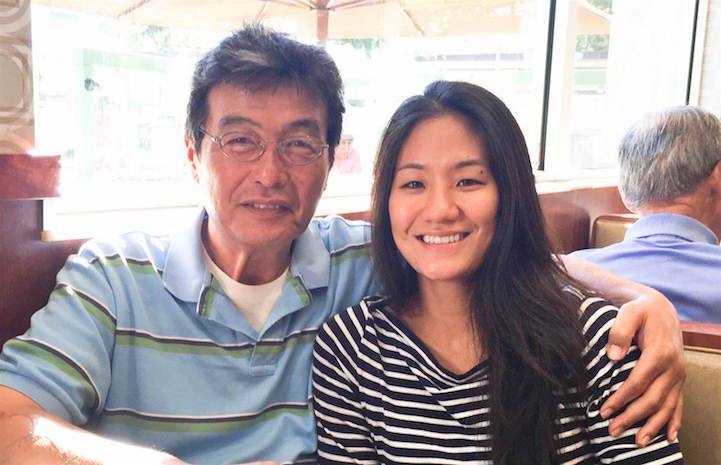 “So long as we are alive in this world, every day is an opportunity to take hold of that ‘second chance.' There is no failure unless you give up, and he never gave up. And I haven't given up on him.”